Why didn’t HarinF tell the Cardinal about Easter Sunday attacks? 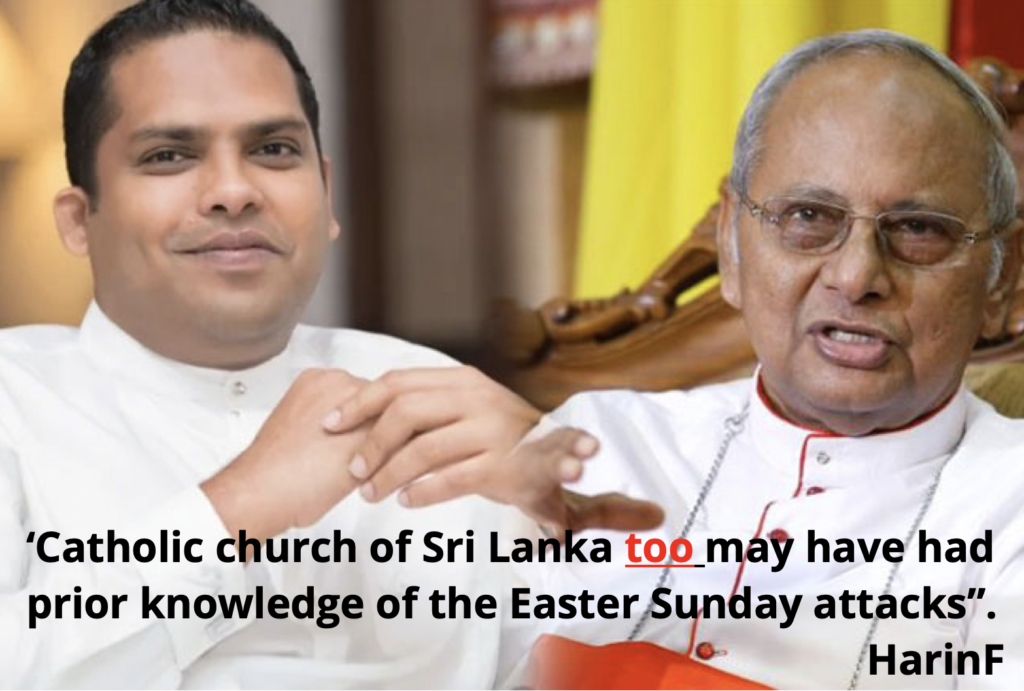 According to the former SIS head Nilantha Jayawardena at least 15,000 people knew of an impending attack on Easter Sunday – to this list of 15,000 people included entire Parliament & even diplomatic missions. All of them are now trying to palm of their guilty conscience by accusing others. Amongst the MPs – the then Minister HarinF who is a staunch Catholic had also been told by his ailing father not to attend Easter Sunday mass. The question is even if Minister HarinF chose not to inform the Catholics of Sri Lanka, why didn’t Minister HarinF tell the good Cardinal & the rest of the Catholic clergy – or did he, or did they get to know by other means?

Why didn’t HarinF tell the Cardinal, the Catholic Church or even PM RanilW or did he tell them & they are pretending they were not told – this is the unanswered set of questions! It certainly does need answers.

HarinF’s father Nihal Fernando through his connections with the CID came to know of intel about an attack on Easter Sunday. HarinF’s fathers call records were given to the commission revealing that he had received a call from Sergeant Nandalal who was part of a CID team that visited Pasikudah to arrest Zaharan’s team member “Army Mohideen” & recover explosives in Wanathawilluwa.

Thereafter he had advise his son HarinF and daughter not to attend mass. It was not only HarinF & his family who did not attend Easter Sunday Church but his nephew as well. His nephew who was a rugby player was to have gone for Easter Sunday church after practices but he did not attend church. When the question was raised as to why HarinF had objected to the question & had to be reprimanded by the Commission.

HarinF was the Minister of Telecommunications. Following the attacks he had even tweeted that IGP had sent an alert sent by his Deputy Priyalal Dissanayake dated 11 April 2019 with regard to the Indian intel warnings. The warnings were reissued two days before the attack & 2 hours before the first suicide mission on St. Anthony’s Church was executed. Former PM Ranil Wickremasinghe earlier denied any information prior to attacks but later admitted that they did have information. In fact HarinF had visited Temple Trees before the attacks & had shown PM Ranil a letter that had been sent to police officials warning of an attack. If he could visit PM Ranil – why couldn’t he have visited Cardinal – or did he?

An article titled “Catholic church may have had prior knowledge of Easter Sunday attacks – Harin Fernando” by Maneshka Borham appearing in the Sunday Observer 20 Sept 2020 reveals some unusual facts.

This statement aligns with the former SIS head who said that 15,000 people would have known about the attacks before the attacks.

Days after HarinF’s disclosure (20 September 2020), three auxiliary Bishops Maxwell Silva, Anton Ranjith and J. D. Anthony Jayakody issued a statement regarding the insinuation by HarinF that the Church was aware of the Easter Sunday attacks & did not hold a public Mass in the morning of 21/4/2019.

Their statement says “Cardinal has indeed presided over the solemn celebration of the Easter Vigil service at midnight on Saturday 20th April 2019 which followed with the Easter Sunday festive mass at St.Lucia’s Cathedral, Colombo 13 ending in the early hours on Sunday morning”(21/4/2019)

– the question – Is St. Anthony’s Church in Kotahena where the bomb went off the same as St.Lucia’s Cathedral also in Kotahena – definitely not, there is a big difference in a SHRINE (St. Anthony’s) and a CATHEDRAL (St. Lucia). Therefore, HarinF’s claim that mass was not held remains a valid question unanswered. 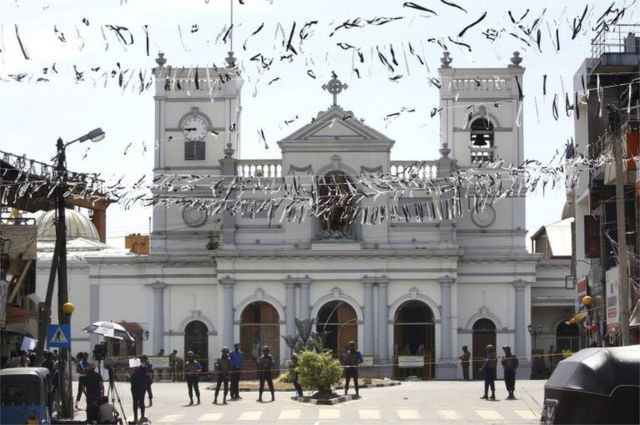 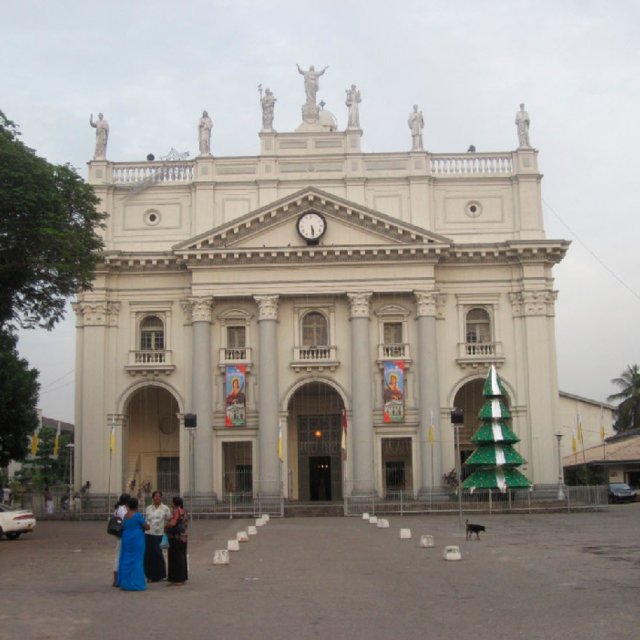 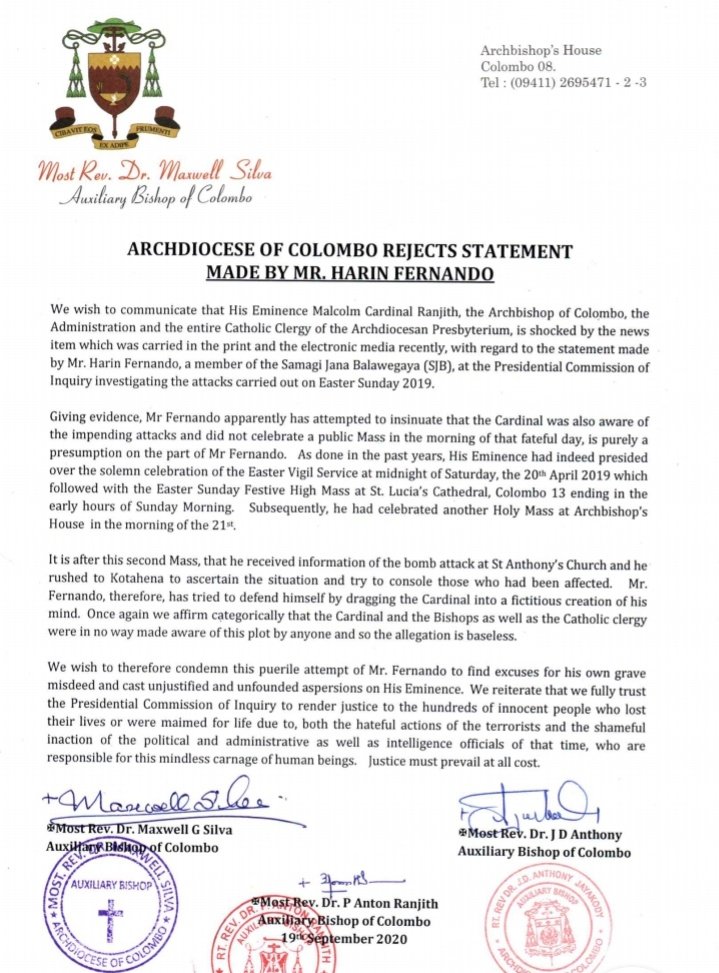 An article title “Sri Lanka Catholic Church “forgives” Easter Sunday suicide bombers appearing on 12 April 2020, quotes Cardinal declaring “we offered love to the enemies who tried to destroy us”. The Cardinal can forgive the men who caused the deaths of 279 innocent people but he takes pain to go behind a ‘conspiracy’ – No wonder HarinF claimed the Catholic Church was engaged in politics in June 2020, 3 months before facing the Commission of Inquiry.

When warnings were given well in advance, more important that conspiracy theories is the actions that could have been taken to PREVENT DEATHS as venues were also given prior to attacks. Who committed the suicide, why or their ideology comes secondary, when news of an impending attack to churches & hotels is informed days before the attack.

Every person in this 15,000 ‘knew the attack” list are morally culpable for the deaths of 279 people and the lifelong injuries of some 500 others. No amount of excuses can erase this guilt that should weigh their conscience every single day.

Only those who knew – will know their guilt. They should tap their conscience and ask why they prevent the carnage – all that had to be done was to stop people entering the Churches or to beef up security in the hotels. Why was no orders given to at least warn people not to go to Church or refrain from gathering in the hotel restaurants. No conspiracy theories can erase the moral accountability of knowing a crime was to be committed & not doing anything about it except to ensure one’s loved one’s did not attend these venues.