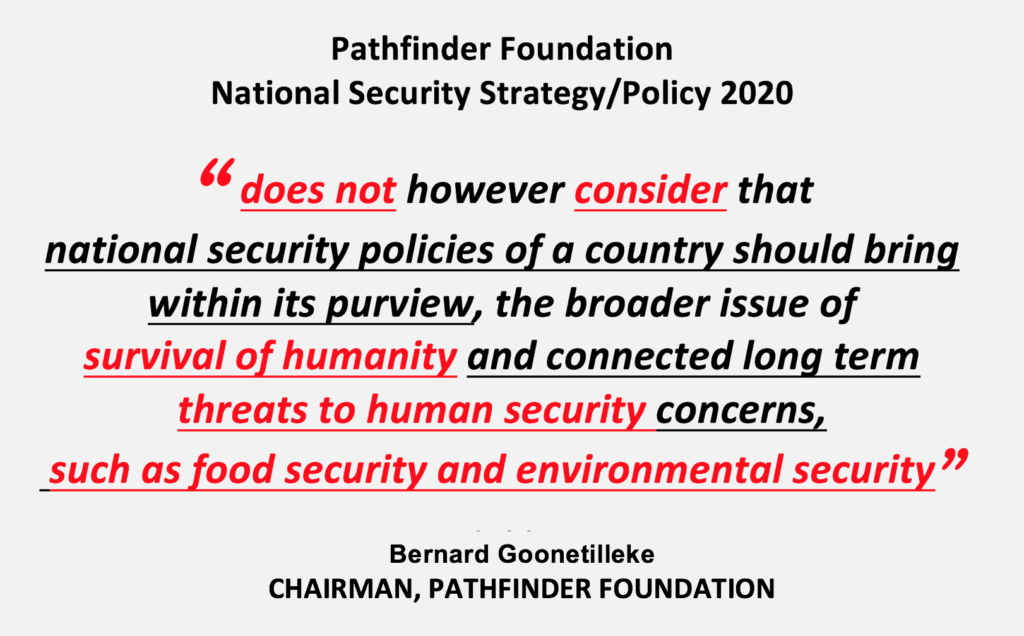 The Pathfinder National Security Strategy was developed in 2018 for the previous government. Then came Presidential elections in November 2019. This meant it was not a document incorporating the vision or mission of the new President though it was handed to the new President immediately after Presidential victory.  Given that Pathfinder Foundation operates and is linked to various think-tanks and entities in India, China and US what is its position vis a vis this trajectory and how does PF wish to position Sri Lanka with its proposal?

The Pathfinder founder Milinda Moragoda’s National Security Strategy for Sri Lanka is based on a ‘code of conduct for the Indian Ocean’ and raises the question – code & conduct for whom! Obviously this is linked to Pathfinder’s programs titled “Trincomalee Consultations-2018’ to promote Trincomalee port. What are the littoral countries in the Bay of Bengal that Pathfinder wishes to promote?

How did emerging security dynamics in the Indian Ocean Region in early 2019 become part of Pathfinders mandate? In April 2019 on Easter Sunday, Sri Lanka witnessed mass murder but the US envoy to Sri Lanka claimed the US had no intelligence on it despite India giving 97 intel warnings!

The most interesting aspect of this report is the statement given by the Pathfinder Chairman who says PF DOES NOT CONSIDER national security policies covering SURVIVAL OF HUMANITY and HUMAN SECURITY (food security, environment security)

In the context of covid-19 and the fact that Sri Lanka may have to re-draw all of its policies within this new health dynamic, completely negates Pathfinder’s policy strategy.

How can “safety of citizens” exclude the all important aspect of human survival?

This conflicts with their later statement how to balance between ‘military and defense based physical security of state and its citizens (Hard Security)and guaranteeing more general form of security that includes physical security of people and their safety and wellbeing, even at the expense of threats to state security and sovereignty (soft security)”.

Is Pathfinder laying blame for Sri Lanka’s economy on the high & increasing level of dependency among elderly population of Sri Lanka (are they not among this category themselves) More than 50% of covid-19 casualties in Europe are from nursing homes where elderly lived raising concerns of foul play. We cannot accept any proposition to raise the economy by eliminating the elderly!  We cannot forget – they too contributed to the country in their youth!

Pathfinder explains that traditional national security was a nation state defending itself & the citizens through military means.

Pathfinder says that ‘soft security’ requires inclusion of a wider set of agencies and experts from political, economic, diplomatic. Is this another name or explanation for demilitarization and to hand over task of national security to others away from the military apparatus? Is this why Pathfinder is laying emphasis on the increasing role of NGOs which should really be named foreign government funded organizations and they are doing their utmost to erode nation-state sovereignty.

Can Pathfinder explain what it means by ‘blurring the very important distinction between national security and human security’?When a nation is given life by the existence of the People and the People’s security is founded in the nation – how can the two be considered separate?

In describing the 1stit is interesting that Pathfinder says ‘Sri Lanka is likely to be pressurized to conclude agreements with foreign countries to serve THEIR NATIONAL INTERESTS”.

This completely nullifies the present document as an impartial proposal. 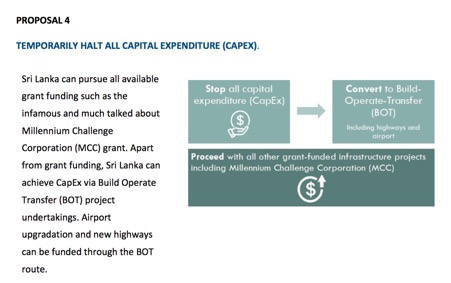 Having recommended Sri Lanka sign the MCC, the Pathfinder in its National Security Strategy says “Sri Lanka should consider developing a multi-directional foreign policyas has been practiced by Vietnam relying on ‘three no’s policy i.e., ‘no participation in military alliances, no foreign military bases on Vietnamese territory, and no reliance on one country to fight against another’.

Is this the reason for the trend to insert Sri Lanka would be ‘NEUTRAL”?

Switzerland is the country often mentioned for its position of ‘NEUTRALITY’ but Switzerland joins EU in voting against Sri Lanka at UNHRC and has shown no reason for anyone to consider Switzerland anything but neutral in its diplomatic affairs.

To be “Neutral” is like watching a woman being raped and refusing to assist or save her simply because one’s policy says “I will not take anyone’s side”.

A country in a position of power can make very condescending statements of being ‘Neutral’ (but actually be not) but can a developing country, up to its neck in debt do so, when it is our improved relations and mutual exchanges of good will diplomacy that promotes countries to assist us?

Is the actual game-plan to make Sri Lanka self-isolate itself and in so doing lose the traditional friends it had?

Isn’t this part of military strategy where the enemy is isolated from all defenses making the attack all the greater and gruesome with no help from anyone.

Sri Lanka’s leaders must not fall for this trap of neutrality– Sri Lanka must remain non-aligned by word and continue its relations with the bloc of non-aligned nation.

Pathfinder national security strategy should have provided solutions to the illegal fishing by India on Sri Lanka’s territorial waters instead of simply saying ‘both countries should address this long-standing issue’. The document is mostly of what everyone already knows and has nothing innovative for Sri Lanka to follow.

Pathfinder mentions that the separatist conflict in north and east as well as the 2 youth rebellions in the South and the Easter Sunday threatened the economy and security of citizens and that the separatist conflict and the Easter Sunday attacks is linked to transnational threats to Sri Lanka’s security. Yes, but it is only diplomatically and via government that Sri Lanka can deal with countries that continue to harbor LTTE diaspora inspite of their countries banning them.

The country was caught unprepared not for any reason but for inefficiency, incompetency of the people wrongly appointed for these roles and blame lies nowhere else but in the leadership of the past government.There was enough intel within the country and there was more than enough intel from foreign sources to have prevented the attack. To ensure future crisis does not arise means to ensure the most suitable persons are given the roles.

Sovereign states cannot unilaterally solve problems, that is why Sri Lanka needs to continue to maintain good diplomatic relations. Claiming to be neutral is not going to land Sri Lanka with any help from anyone or any country when in need!

In the event of trade sanctions or even a natural disaster/calamity etc if Sri Lanka continues with its ‘NEUTRAL’ song would any friendly country even come to our assistance?

We do not need to tell Pathfinder who are the main source of illegal international drug trafficking and how they operate and why the world will never see an end to international narcotics trade or smuggling except for countries to secure their borders. Again with human smuggling too, countries that claim to champion it have allowed Sri Lanka’s terrorists to flee and operate from their land. When such duplicities and hypocrisies prevail what can a country do but to adjust and find ways to mitigate the situation!

A well-coordinated intelligence apparatus can quickly ascertain where trouble-makers are looming and nip the situation in the bud before it spreads like a cancer, is the lesson Sri Lanka has to take from all of its past conflicts. Not taking action when Sri Lanka should have, is the mistake Sri Lanka made and as a result, suffered consequences.

That Sri Lanka was stopped from taking action must also be mentioned via bogus ceasefire agreements (to which the Foundations’ founder was also party) was only meant to provide the enemy time to regroup and return with venom.

Let it not be forgotten, that presumably without a ‘national security strategy’ Sri Lanka defeated the most ruthless terrorist organization linked to foreign countries and indigenously carried out a rehabilitation, resettlement and reintegration program to success. Countries with near-perfect national security strategies are continuing to fight terror with no success in sight.

With Pathfinders emphasis on formulation of ‘Expert Committees’ within the National Security Secretariat, is Pathfinder attempting to secure a place within this apparatus?

During Indo-Pak war and Pakistan requested to refuel in Sri Lanka, India objected but Mrs. Bandaranaike firmly stated her stand and to this day both countries respect her for her stand. This was diplomacy at its best.

Pathfinder recommends Sri Lanka follow Vietnam’s 3 no policies – no participation in military alliances, no foreign military bases on Vietnamese territory and no reliance on one country to fight against another’. But the loophole is that the ‘No’ allows defense cooperation – so what’s the big deal in the ‘No’s’.

RAND Cooperation says “as long as characterizations of military exchanges remain vaguer, Vietnam is likely to be willing to engage more extensively’.

So what does Pathfinder recommend that Sri Lanka keep its terms vague with room to do exactly what Sri Lanka claims it will not?

Let us note that Vietnam has given China ‘comprehensive strategic cooperative’ status,

US is Vietnam’s ‘strategic partner’.

All these partnerships remain, though Vietnam says ‘no military alliances’.

So who are we fooling with the thesaurus.

Vietnam’s liberalizations (advantageous to transnational corporates) are drummed by Western entities as a success story to its development which hides the impacts to the Vietnamese whose status of life hasn’t improved though country statistics has!

Pathfinder recommends Sri Lanka does not say what Sri Lanka will do and keep terms vague.

The most shocking aspect of Pathfinders proposed national security strategy is its omission of the survival of humanity and human security concerns (food security, environment security etc)