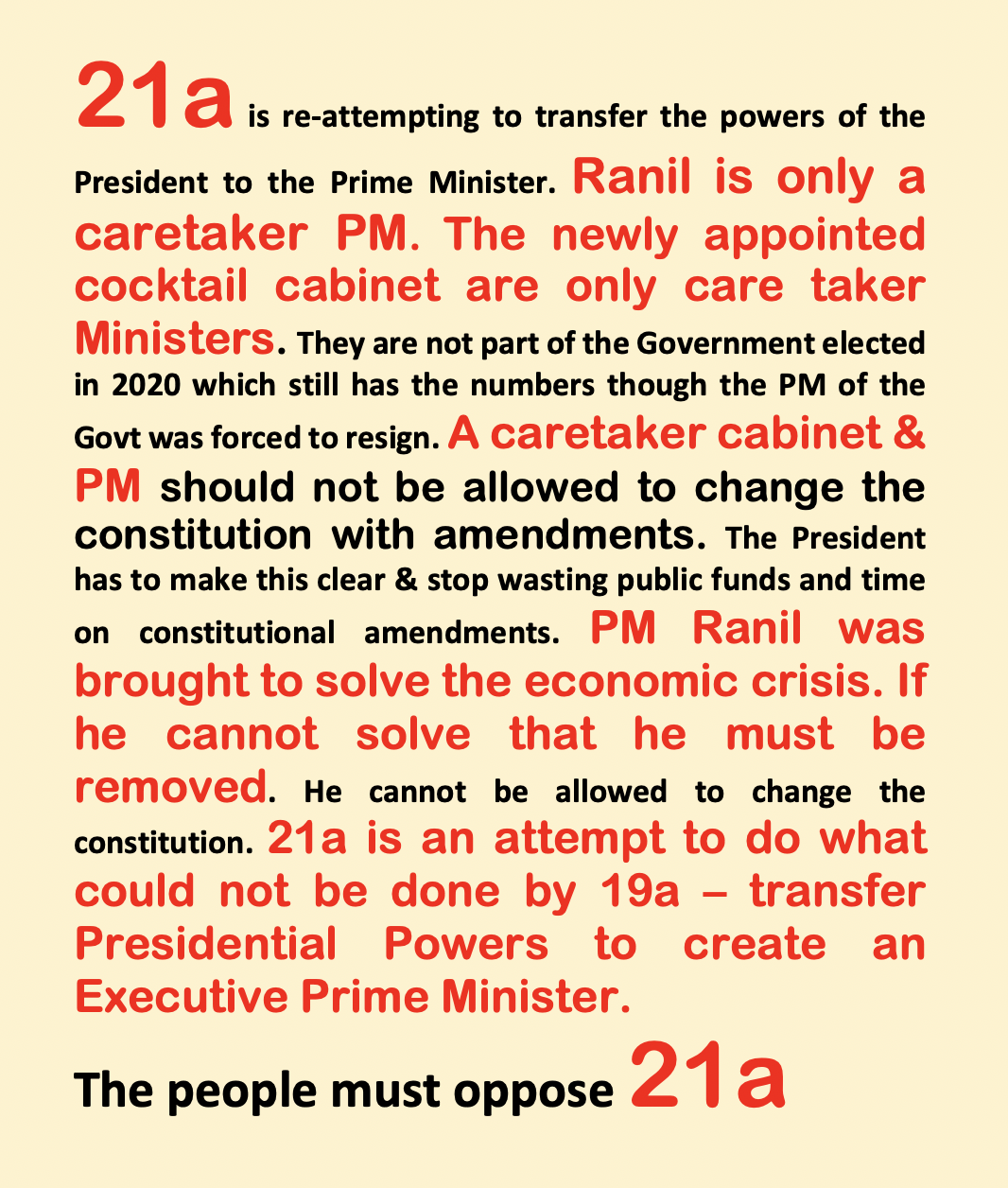 21a is re-attempting to transfer the powers of the President to the Prime Minister. Ranil is only a caretaker PM. The newly appointed cocktail cabinet are only care taker Ministers. They are not part of the Government elected in 2020 which still has the numbers though the PM of the Govt was forced to resign. A caretaker cabinet & PM should not be allowed to change the constitution with amendments. The President has to make this clear & stop wasting public funds and time on constitutional amendments. PM Ranil was brought to solve the economic crisis. If he cannot solve that he must be removed. He cannot be allowed to change the constitution. 21a is an attempt to do what could not be done by 19a – transfer Presidential Powers to create an Executive Prime Minister. The people must oppose this.

19a is not as gaga as is being presented & anyone who has read it would see the confusions and contradictions in a hurriedly passed amendment.

20a may have insertions that are unnecessary, but these are not dangerous to the State. In short, we do not need to waste time and public money on constitutional amendments. PM Ranil was not made PM to be changing the constitution.

However, 21a is re-attempting to transfer powers from a President elected by 69lakh people to a Prime Minister who lost his seat, could not secure 10,000 votes and sheepishly and undemocratically entered through the backdoor from the National List.

How can a person who has been elected by 69lakh people have the powers delegated to him by the People, transferred to a person who has entered to Parliament undemocratically to become the Executive Prime Minister?

This is what Parliament, the Judiciary & the Citizens of Sri Lanka should be asking.

The current cabinet is the 2nd cabinet appointed by the President.

2nd cabinet is currently have 13 Ministers with Ranil Wickremasinghe as PM.

This 2nd cabinet is made up of a coterie of people from SLPP, SLFP, SJB – therefore, they are not from the Government that came to power in 2020 August. More importantly, the majority of the Cabinet Ministers were those that left the Government in April 2022 and chose to sit independently. One particular Minister was even sacked from his portfolio months earlier.

Nalin Fernando – a critical ministry of food given without any experience

All of the above have never handled such portfolios and raises questions on whose advice these portfolios were given. Their allocations, do reveal a different script, but this is another issue.

The point that needs to be made is that the PM and the Cabinet are not representative of the People in terms of vote or in terms of people’s mandate. Therefore, they have no moral right to be presenting anything as a Bill with the ultimate objective of usurping the powers of the President & transfer it to create an Executive PM.

This was an effort attempted in 2015 with the 19a and that unfulfilled task is again being attempted.

In 2015 the attempt was made by the same PM who was controversially appointed PM without removing the sitting PM after a Presidential Election. Creating a bogus “national government” the 19a was passed as an Urgent Bill with people given no time to raise objections and legal counsels not having time to review the plethora of amendments that were being made. What was sent to SC for determination was not what was passed. If the same parties that passed 19a dubiously are in action again to pass the 21a, the people must object and Parliament MPs must also rise against it.

It is not difficult to identify the parties that supported the 19a are the same as those supporting the current 21a.

We must take changes on the merit as well as the principle behind the objective. The aim however, is to transfer Presidential powers (given that it is a tedious process to abolish the Presidency) to the PM. If this exercise was happening in a legal way, we can accept it, however, when a controversial PM is seated and is attempting to do what he could not do via 19a, we have to object. The spirit of the objective is wrong & undemocratic.

People must oppose 21a because a caretaker PM and a caretaker cabinet CANNOT and SHOULD NOT be allowed to make Constitutional Amendments.