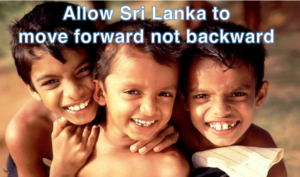 With every year, the resolutions and recommendations to Sri Lanka by the UNHRC have nothing whatsoever to do with the last phase of the conflict and the manner it ended. Geneva sessions have become nothing but intrusions into the internal affairs of Sri Lanka and a close look at the changes demanded showcase a ploy to weaken the foundation of Sri Lanka and enable international intervention and international rule in Sri Lanka. Why has Sri Lanka’s leaders and policy advisors failed to see where the UNHRC resolutions are leading?

The former UNSG Ban Ki Moon appointed a personal commission to appraise him of the final 3 months of Sri Lanka’s conflict. Why he did not do so for the other raging conflicts across the world was a puzzle as this was the first time a UNSG had called for a personal appraisal of a conflict that had ended. Was the UN asleep when Sri Lanka was suffering 3 decades of terrorism.

The last phase of the conflict was the basis for allegations against Sri Lanka but that meant Sri Lanka needed to be judged based on any violations of international humanitarian laws more than human rights laws. The allegations of IHL could be easily debunked by the reports by the 6 international terrorism experts and questions why the Sri Lankan delegation never tabled these reports with their responses. Even the Consultative committee minutes and the statistics of essential items sent would have demolished the claims that Sri Lanka ‘starved’ Tamils.  Attorney Dharshan Weerasekera’s debunking of the OISL report too took on all of the allegations and summarily responded to each.

Nevertheless, a pattern of intrusion was evident from every draft resolution against Sri Lanka as well as the OHCHR’s report – these were nitpicking areas that the resolution drafters found a pain to subjugate Sri Lanka. These items had nothing whatsoever to do with the final phase of the conflict – how can UNHRC resolutions demand implementation of 13a, devolution, changes to the Judicial system, demilitarization, closure of military camps, recommend non-appointment of retired military persons to public roles? Just take the recommendations and see what percentage of recommendations or even allegations cover the final phase of the conflict or answers questions regarding the conflict?

Sri Lanka must appeal to the 47 Members of the UNHRC 2021 at least the Global South of the intrusive nature of the resolutions and the recommendations which seek to create a precedent that would invariable impact on their countries too.

Thus, the Global South countries must look at Sri Lanka’s case as

The very countries peddling the resolution are those who are members of QUAD wishing to turn Sri Lanka into a military base or hub against Asia’s growth vis a vis China. Sri Lanka is caught between adversaries who are using a terrorist conflict that was brought to an end by Sri Lanka to justify their interference Noteworthy is that campaigns for justice are coming not from Tamils in Sri Lanka but LTTE Diaspora operating from countries that are championing the resolutions against Sri Lanka. It’s nothing but a case of you scratch my back and we’ll scratch yours. LTTE is banned in these very countries but these LTTE fronts operate quite freely in these countries. When UK the Core Group leader lights its Parliament for LTTE (which is banned in UK since 2000) with “We Remember” Prabakaran – what more is there to say.

Obviously the nations that host LTTE fronts, who are also drafting resolutions against Sri Lanka do not wish for Sri Lanka & its communities to live in peace. Instead it wants Sri Lanka to be divided into pieces. They wish to use UNHRC as a basis to create precedents that they can apply to the rest of Asia, Africa, South America and any other countries they wish to implement R2P to plunder.

While Sri Lanka must take the baseless allegations head on and highlight the intrusive and non-conflict related items in the resolutions, Sri Lanka must lobby the Global South Nations and request one of them to raise the call for a vote on the intrusive resolution that is attempting to place international mechanisms in Sri Lanka which is a major assault to the nation-state sovereignty of Sri Lanka and future nations that will be targeted.

An organization and a country is judged by the quality of leadership and its past record. UNHRC had heads that have functioned controversially and with bias. The present UNHRC head’s family is involved in huge tax scandals in Chile, a country with a blood stained past. Soiled Hands cannot pretend to be angels – US, UK & NATO nations should know this more than any other countries. Their records of crimes cover both colonial and neocolonial.

Alternatively, Sri Lanka must together with Global South members draft a new resolution bringing this ordeal of 12 years to a close. The UNHRC started alleging 40,000 dead, then forgot about it and are not bothered about it and for 12 years the people of Sri Lanka have moved on with their lives and now wish to look forward and not backward. All that the UNHRC wants Sri Lanka to do, Sri Lankans do not wish to do. People have died from all communities since 1970s. But now there is no LTTE and there are no LTTE suicide missions or assassinations. More than anything else there are no LTTE child soldiers and Tamil parents are happy they kids are not going to be kidnapped and taken to the jungles. These are more important than the tamashas Geneva wishes to have annually.

We want to more forward & not backward. Whatever UNHRC drafts claim, we saw how our armed forces rescued Tamils, brought them to safety and fed them – what we saw cannot be erased with UNHRC/NGO lies. 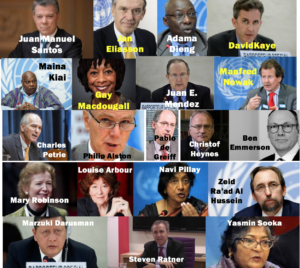