COVID-19: Is Spain at receiving end of karmic retribution? 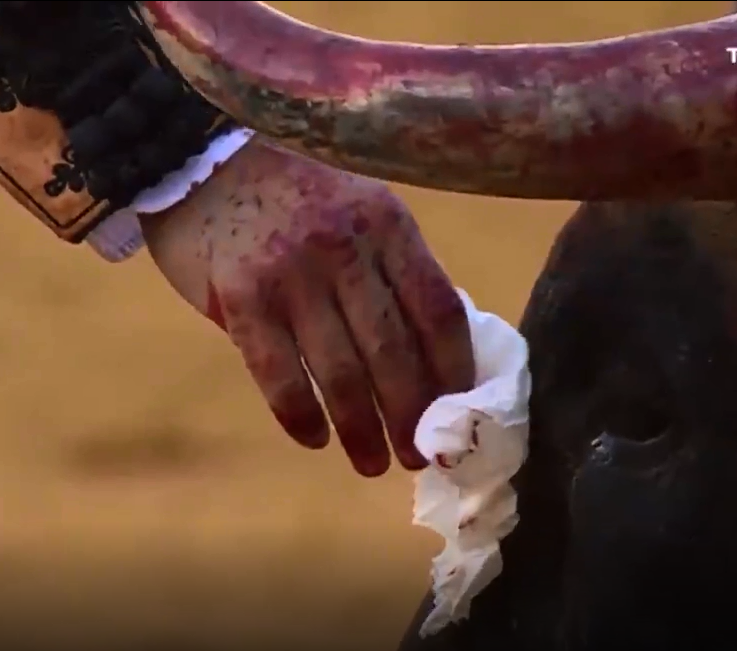 Spanish colonial crimes – Bull Fighting – Spanish Flu – Covid-19 do you see a connection? Do these trail of thoughts carry a trail of tears? Do they implore Spain to revisit their moral standing of past and present actions? Over 500 years of colonial crimes, over 300 years of bullfighting, Nature has watched silently and patiently the pain and anguish of the natives whose lands & pride were stolen by European explorers and the tortures bulls were subject to. When nature saw no signs of repentance or remorse, Nature unleashed her fury. First in the form of the Spanish flu (Jan1918 to Dec1920) killing some 50million people and now in 2020 Spain has again been brought to heel and face a new agony – covid-19. Mother Nature has made Spain to go through exactly what they inflicted for centuries on natives that they tortured, killed and plundered and for the cruelty they inflicted on bulls in the gruesome sport of bullfighting. Will Spain treat covid-19 as karmic retribution and resolve to atone for its crimes by apology and reparations to South America & to end bullfighting? Hemingway wrote, A death will occur this afternoon, will it be man or animal?” – it should be neither.

What the Spanish conquistadors did to South America over 500 years are far worse than what Hitler & Germany committed on the Jews.

The Indians were totally deprived of their freedom and were put into the harshest, fiercest, most horrible servitude and captivity which no one who has not seen it can understand. Even beasts enjoy more freedom when they are allowed to graze in the field.

The Age of ‘Discovery’ meant declaring as ‘found’ already inhabited islands and territories. Spain was responsible for eliminating erasing 3 ancient civilizational tribes – Incas, Mayas and Aztecs, committing genocide of their culture, their literature, their language and their customs. Today these very nations are sending their people to study about the ancient civilizations that they erased and turn their stories into coffee table books.

Native Americans were turned into slaves, slaves were imported from Africa. The Natives had their customs, traditions, rituals erased. They were forced to sign illegal treaties that ceded their lands to White Nations. Historians estimate 50million natives lived in Americas when Spain landed in the 15th century. That number became 2million in one of the world’s forgotten genocides committed by European explorers via small pox/measles and the gun.

Covid-19 is making Spain undergo a catharsis and the agony is likely to continue until genuine signs of repentance is seen.  Until such time the world cannot sympathize or empathize with Spain. Spain and the Spanish people must atone for their crimes.

If Germany & Japan were made to face their sins and forced to atone for their crimes, there is no reason why Spain shouldn’t. Germany was forced to atone for its crimes via the Nuremberg Tribunals in the case of Spain, Mother Nature is showing Spain a lesson for not only killing man but animals as well.

Isn’t it ironic that most of the countries severely hit by covid-19 inspite of proudly referring to themselves as the First World, calling themselves ‘civilized’ nations, are unable to deal and contain the virus. Is it that they cannot or is it that Nature is divinely interfering to make them taste the medicine they forced upon others. Aren’t these nations including Spain now facing the same tune they inflicted with cruel intent on others?

Spain never received the justice it deserved because the white man controlled the world. All of the former colonial powers gathered to protect their own and continue to do so. They decided what was fact and what was fiction. Victor’s justice ruled. They wrote and rewrote history according to their whims and fancies. All of the worlds’ discoveries became attributed to the white man. Only now we know Columbus never discovered America!

500 years of colonial crimes and 300 years of bull fighting leaves Spain much to ponder over. The tears of the bull are no different in measure than the tears of natives slaughtered to death.   Until the bull learns how to write, every story will glorify the hunter”

Before a bull enters the ring, his horns are cut with hacksaw without anesthesia, his eyes are smeared with petroleum jelly to blur vision, his ears are stuffed with cotton, his nostrils are stuffed with newspaper, he is denied food & water for days, Epsom salt induces diarrhea, a needle is shoved into his testicles, he loins are beaten, some are even given tranquilizers, days before the fight he is kept in darkness to further traumatize him and just before he enters the right he is poked with harpoons. Then they take turns on slowly killing him while crowds cheer. With so much pain inflicted for days in advance what is this ‘mastery’ that a matador boasts of over the bull? Eventually the bull is butchered often while still alive and this is called Spanish culture.

If Spain regards the matador as ennobled, the mass murderers during colonial rule would have also been garlanded.

Spain is today facing the law of karma. Do good – good returns. Do bad – bad returns. Newton says ‘every action has a reaction’. What returns can get modified but it cannot be eliminated. The change happens only if a person realizes the damage done by one’s deeds and resolves to ensure such deeds are never repeated. Spain tap your heart & conscience.

As you sow, so shall you reap” when Spain and other European explorers confiscated lands already inhabited & declared they had ‘discovered’ them the white historians made us all to believe these were ‘their lands’.

Spain and its white-exploring partners completely disregarded the law of creation – that life doesn’t just happen. They thought they were the universe and their will must rule. They brushed aside the law of humility. They completely ignored the law of growth – all others had to change except themselves. Their law was US vs You. In so doing they ignored the law of responsibility taking accountability for one’s actions. They ignored the mirror showing their crimes, the tears and sadness of the people and animals they inflicted pain and torture.

The innocent people that welcomed these strange travelers had their generosity and hospitality abused. In return for their smiles of welcome, they received the sword and thus the law of giving and hospitality was broken by these white nations.

It was only time that they would also break the law of connection. By breaking away from the universe they were closing the door to Nature.

So long as perpetrators of evil to man, animal and nature do not atone for their crimes history will repeat and continue to repeat until lessons are learnt and the path of change is adopted.

The intent must now be good thoughts, compassion, humane living, loving contribution to man, society, Nature and even animals.