LTTE was banned by UK in 2001 though UK was LTTE’s international headquarters from 1980s.

While Lord Naseby remains the only sane Britisher to realize who a terrorist is, scores of UK Parliamentarians chose to flirt with LTTE lobbies living in UK for votes and other perks coming their way. They regularly shed crocodile tears attending LTTE events and inspite of ban, unashamedly deliver pro-LTTE statements too. All this is nothing the British government is not unaware of. In fact, the woman who trained Tamil children as young as 7 to shoot & kill as well as to commit suicide biting the cyanide capsule is also happily living in UK enjoying the illegal blood money. There is obviously much that LTTE and the UK Government have in common. LTTE’s murderous past is known by all. Colonial Britain has much to be ashamed for its colonial criminal past. Not stopping there, the Iraq war and supplying arms and training to tyrants, despots and dictators makes it natural that UK finds comradery with LTTE easier than with an elected democratic government. Be that as it may, it is absolutely shocking that UK allows its Parliament to be lit for LTTE’s commemoration of its leader’s birthday while even cut outs of the brute murderer is also allowed until complaints are filed forcing removal. If LTTE is banned by UK – shouldn’t UK police be taking action instead of waiting for complaints to be filed?

LTTE took to gun by not attacking Sinhalese but by killing Tamils. The Tamil mayor was killed in 1975 and thereafter Tamil police and public servants were killed to scare them from joining government service. After scaring Tamils from joining state service, the LTTE begin complaining to the world, that Tamils were not employed by the State.

The third victims of LTTE became innocent Sinhala villagers who were attacked and killed including pregnant mothers and babies in the most horrific manner. Today, the same LTTE is complaining about human rights not given to these same killers. Who knows how many innocent Tamils LTTE killed when they didn’t tow their line? How many Tamil children were kidnapped and turned into child soldiers? How many Tamil families have had to weep the loss of their child after learning they had been kidnapped when going to school and turned into LTTE child soldiers. Who is going to cry for these sins of LTTE? Are these not crimes? What does the UK have to say about these criminal acts by LTTE?

It is absolutely shocking that UK Government and MPs apart from a handful like Lord Naseby, are more concerned about how LTTE terrorists got killed than what these terrorists did to society. LTTE even killed an Indian Prime Minister on Indian soil. These UK MPs seem not to care about the suicide bombings, assassinations, bus/train bombs carried out by LTTE. LTTE did not attack only the Sri Lankan Armed Forces, LTTE attacked unarmed civilians traveling to work, to school, visiting the temples etc. What harm did these people do to the LTTE to be killed? How many British MPs have seen fit to even think about these LTTE crimes?

As for the LTTE Diaspora, many who have hardly any intent to return to live in Sri Lanka, speaking in heavy British accents about an Eelam, which is only a campaign slogan are simply organizing grand tamashas as every tamasha affords a commercial means to make money. How much have they made from printing key tags, car stickers – today Prabakaran is nothing but an ornament to sell and make money. This terrorist leader must be turning in his grave at the number of commercial items printed and manufactured with his face with a price tag to sell and enlarge the LTTE kitty. Of course, the recipients of the profits are not the LTTE combatants who are alive or their families in Sri Lanka or the families of the deceased LTTE, but the foreign living LTTE diaspora who must be laughing all the way to the bank after the tamasha is finished and giving each other a thumbs up for their acting performances!

Making money from a banned dead terrorist Leader and his eliminated terrorist outfit is the only means by which the LTTE diaspora can generate a handsome income. Of course the others knowing the lucrative nature of this business must be getting a share for their silence.

If LTTE is banned, anything denoting LTTE must also be banned. Declare these insignia as banned and officially inform countries that have banned LTTE to also ban these insignia and emblems. If there is no law in place to do so, write the law and immediately initiate action.

It is obvious that the US has passed the baton to UK to take on Sri Lanka at the UNHRC. If UK can be obnoxious to demand accountability from Sri Lanka, what stops Sri Lanka from slapping UK for colonial crime accountability. At least the world must know the atrocities that the British committed with impunity, is far more horrendous than what they accuse Sri Lanka of by listening to tell tales of their terrorist LTTE friends.

Here are some examples – it is shocking how British can have the audacity to point fingers at any country without atoning for these crimes first: 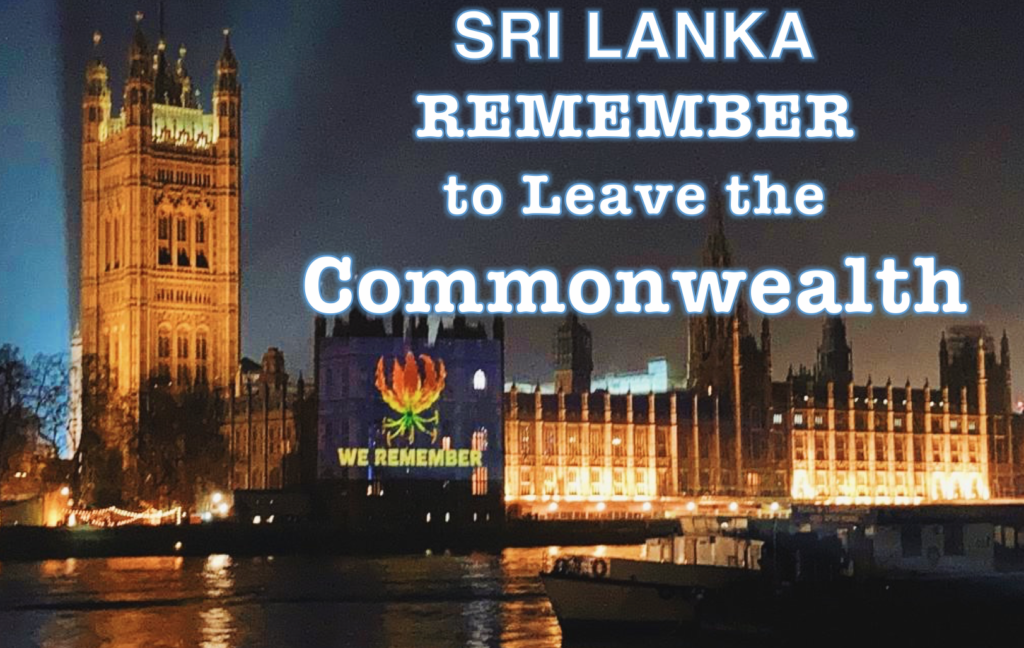 Will UK remember IRA killed by UK troops and allow “We Remember IRA” to be lit across UK Parliament?

Will UK remember Osama bin Laden and allow “We Remember Osama” to be lit across UK Parliament?

The karma or nemesis of UK’s international policy of favoritism to separatists, terrorists and extremists have finally brought the chickens home and Scotland is now asking to separate from UK.

Its not enough that Brexit has isolated UK from EU, now Scotland desiring to leave UK means UK is left with only the extremist & separatist LTTE lobby and the Islamic terrorists as friends. What fine company for the UK Government!

With a crippling economy, imagine the position of the UK if all Commonwealth Nations also decide to say cherio to the Queen!

Sovereign countries do not require to continue honoring the Queen!

What if UK’s divide and rule came home to roost and UK finds itself splitting up?  https://youtu.be/yClCaOqliSw

What if Scotland does leave UK – how powerful would UK be? Would UK still be pointing fingers aided by LTTE Diaspora?

Just as UK goes splitting up nations and takes sides of separatists, extremists and even terrorists – the world must also help Scotland obtain their separatism from UK. Then only UK will realize what countries go through when nosy-parker nations try to lobby rebels and fund them to split nations for geopolitical gains. This is karma coming to UK. https://youtu.be/ug8hH9UK6Lw

Over in Sri Lanka, the people want to move on. Who wants to commemorate a dead terrorist except those that thrive on commercializing the terrorist. In Sri Lanka, LTTE or Prabakaran has no commercial value!

Over in Sri Lanka, even TNA leaders have to travel to the North with the “Sinhala” security to safeguard their safety! It is that hilarious! Of course hypocrisy of Tamil leaders is nothing new – it comes naturally. But, the Tamil people have rejected them by vote and that says much. The Tamil people wish to move on and the rest of the country wish to have them join to not live in the past but to move forward. UK-EU-US-Canada & India may care to continue to hen peck and showcase their double standards, but people are not fools and they can’t be fooled any more.

UK-US-EU-Canada & India are welcome to flog the dead LTTE and hold any amount of tamashas in their countries. We hope that while they are doing so they spare some time to think about all of the credit card scams, social welfare scams, money laundering, human smuggling, illegal immigrants – LTTE diaspora are involved in are fleecing their citizens and not ours. Best of luck in pussy footing the LTTE Diaspora – who are only fooling your citizens and not ours!