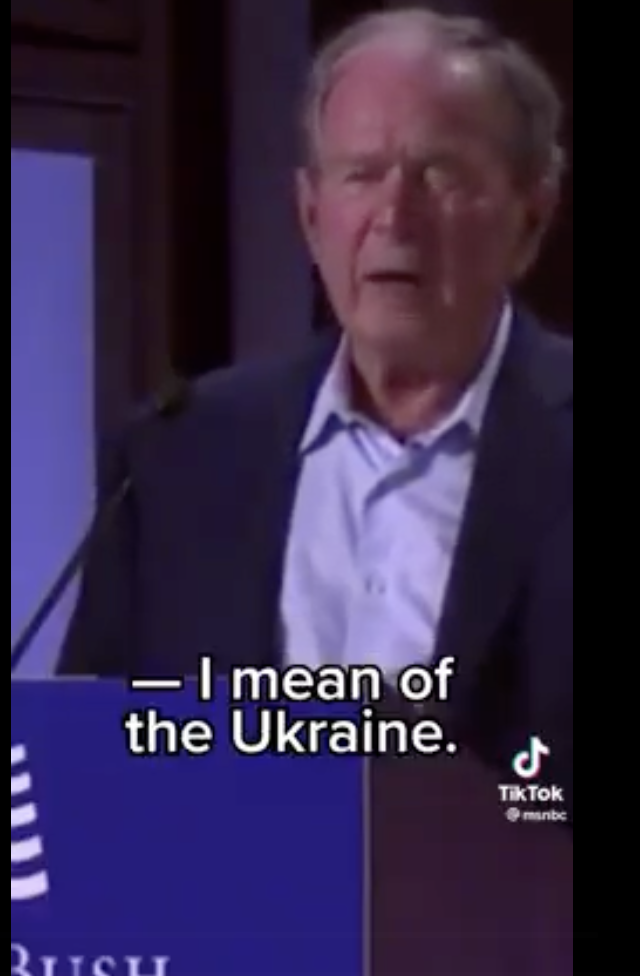 “The decision of one man to launch a wholly unjustified and brutal invasion of IRAQ … I mean of the Ukraine ….Iraq too, anyway … (he laughs) …I’am 75 (audience laughs) …”. The man former US President George Bush was referring to was Russian President Putin. However, his tongue slipped in his reference to Iraq instead of Ukraine. However, the manner that he & the audience laughed showed how callous war mongers are to people who suffer from the wars they order. The tone of the presenter following the President’s speech says it all: “I am not laughing ….and I am guessing nor are the families of the thousands of American troops… and the hundreds and thousands of Iraqis who died in that war ….https://www.facebook.com/100000262706800/videos/513797347193997/ Iraq had nothing to do with 9/11 though it was illegally invaded & occupied since 2001. US has spent over $8trillion on wars US has created. What could Americans have done with this money!

On 9 September 2011 US Twin Towers were attacked. The BBC showed the attack 20 minutes before it fell on 0520p.m. BBC was only reporting Reuters. It was one example of many that raised many theories in particular the alignment with revelation of Gen. Wesley Clark of US occupying 7 countries in the next 5 years.

The Iraq attack cost not only Iraqi lives but American military lives as well as place Americans in debt. Who really benefitted by Iraq war as well as the many other wars that US keep creating?

While the ordinary American will have to pocket $8trillion for the cost of America’s illegal wars, who actually benefit from these wars? It is the arms contractors & oil companies– US companies account for 60% of total arms sales. Americans are paying for companies to get richer (some 27,000 contractors)!

According to Project on Government Oversight between 2008-2018 around 380 high-ranking officials had become government lobbyists, defense contractor consultants or were elected to be board members & executives in these companies after leaving the military. The same has been seen in elected officials eventually joining some of these top firms as consultants or sitting on their Boards.

None of these illegalities result in resolutions against US or its allies. The UN/UNHRC becomes a farce when justice is twisted and biased.

Not only the cost of war in terms of deaths, what about the destruction as a result of incessant bombing that destroyed much of Iraq’s infrastructure often intentional. These were also part of a larger plan to award contracts to foreign conglomerates. There were said to be 43,000 foreign contractors in Iraq. https://www.latimes.com/archives/la-xpm-2007-jul-04-na-private4-story.html

According to Financial Times US tax payers have spent $138bn on private security, logistics and reconstruction contractors, who have supplied everything from diplomatic security to power plants and toilet paper. https://www.ft.com/content/7f435f04-8c05-11e2-b001-00144feabdc0

In short, war has become a costly business for the average American who have to pay to make handful of Americans become filthy rich no wonder George Bush is laughing!

What is happening in Ukraine is just a repetition of all of the previous illegal wars US waged with dual purpose – expand their hegemony & political influence & fill the coffers of the American elite that profit from wars.