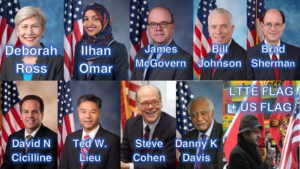 On 18 March 2021, nine US Members of Congress co-signed a letter addressed to the US Secretary of State Mr. Anthony Blinken. They didn’t mince their words. Immediately after congratulating Mr. Blinken on his new appointment the 9 Congress representatives jumped to their point “We look forward to working with you on a range of issues, including addressing human rights in Sri Lanka”.The world will fall  apart unless US solves Sri Lanka’s ‘problem’.

While 5 of these signatories have never been to Sri Lanka, the remaining 4 are controversially linked to pro-LTTE elements and have allegations against them for it. So it does make any to wonder what their locus standi is in throwing allegations against a sovereign state. 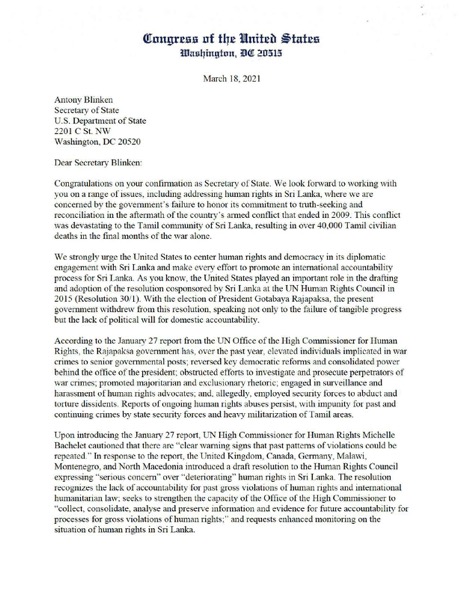 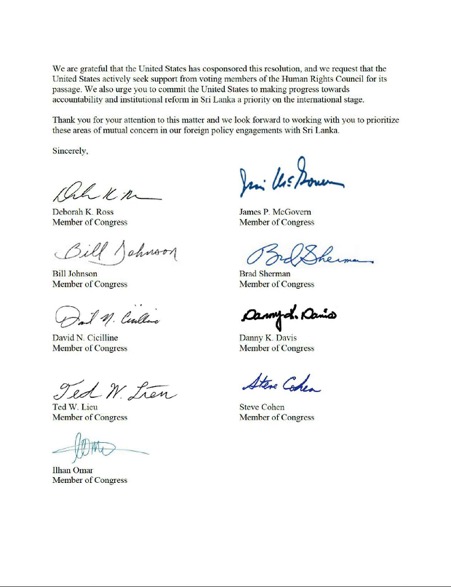 Deborah Rossleading the resolution, is an attorney, representing North Carolina was a speaker at the Elon University Tamil Genocide Remembrance webinair in May 2020. Former Northern Chief Minister C V Wigneswaran also took part in this. Deborah Ross is also linked to the North Carolinians for Peace that covered the pro-LTTE propaganda of the conflict via a plethora of Tamils linked to the University promoting lies & distortions. Has not been to Sri Lanka. 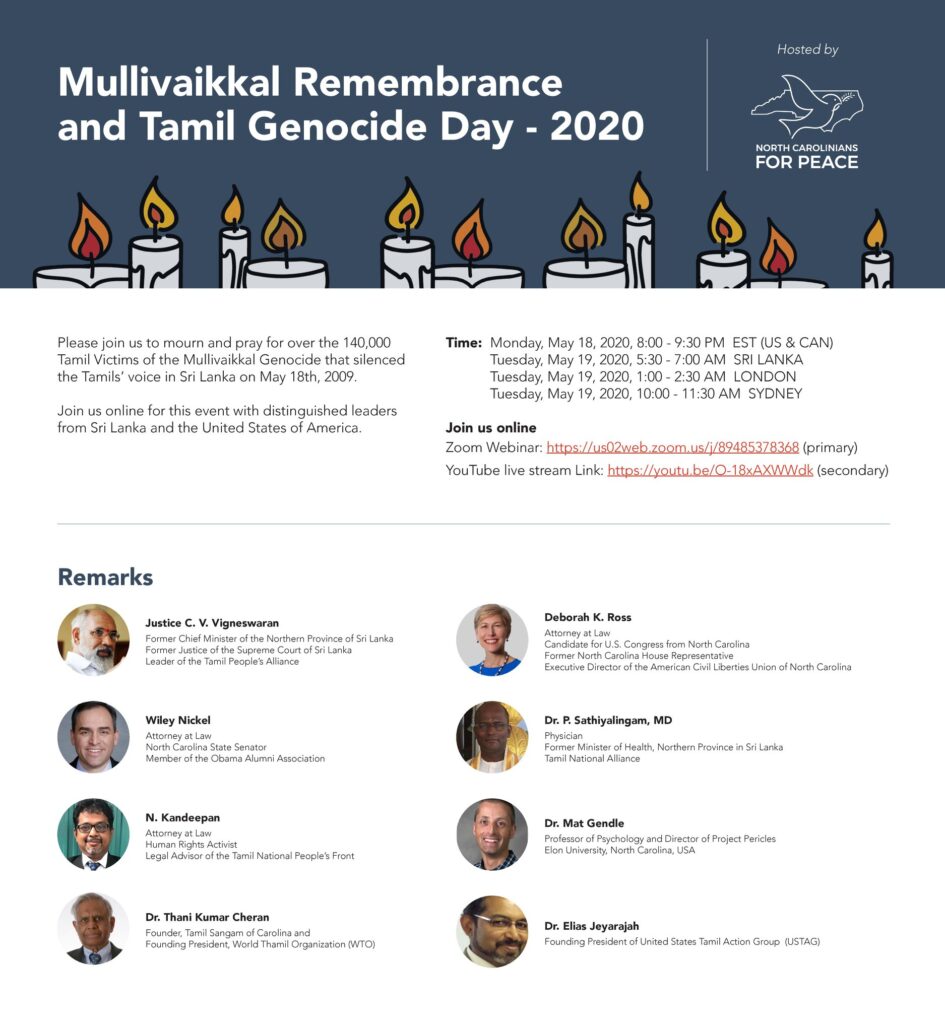 Brad Shermantook part in a House of Representative Resolution against Sri Lanka in 2020 on enforced disappearances. Sherman is regarded as a staunch ally of the Tamil lobby in US and has been publicly promoting ‘Tamil autonomy’.

An interesting article by Hassina Leelaratna http://pdfs.island.lk/2008/02/11/p7.pdftitled “US Lawmakers with ties to LTTE money” names Brad Sherman as receiving campaign funds from US banned TRO in 2008.

David N. Cicillinerepresenting Rhode Island in 2012 & 2014 expressed support for the UNHRC Resolution sponsored by US. Never been to Sri Lanka

Ted W. Lieurepresenting California in 2017 quoted Sri Lanka when he signed a letter with 30 members of Congress following decision to close Office of Global Criminal Justice.

https://lieu.house.gov/media-center/press-releases/rep-lieu-leads-30-member-letter-urging-tillerson-not-close-war-crimesNever been to Sri Lanka

James P McGovernrepresents Massachusetts – has never been to Sri Lanka

Danny K Davisrepresenting Illnois in 2010 called Tamil Tigers “freedom fighters,” Sinhalese “slave owners” when his own country has banned LTTE since 1997. Davis urged then US Secreary of State Hillary Clinton to probe allegations of rights violations during the final days of the war.

Davis is also alleged to arrived in Sri Lanka in 2005 sponsored by LTTE and spent a wee inn the company of hardcore LTTE. Danny K Davis was even under FBI investigation for LTTE links. 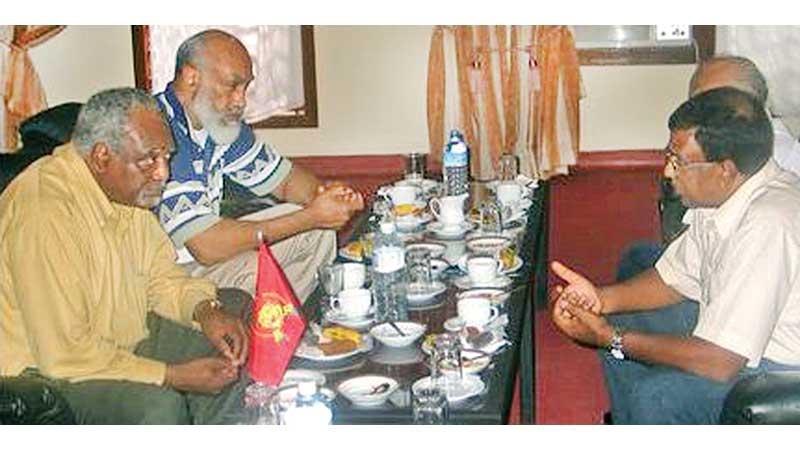 Here’s Davis enjoying tea with LTTE flag in front of him!

Bill Johnson– representing Ohio served as co-chair of the Congressional Caucus on Ethnic and Religious Freedom in Sri Lanka in 2014 and probably heavily influenced by its guest speaker J.S. Tissainayagam.

Bill Johnson accompanied then US envoy Atul Kesap to Jaffna in 2017.

In June 2019, Bill Johnson and Danny K Davis submitted a resolution on the 10thanniversary of the end of conflict in Sri Lanka to the House of Representatives which was referred to the Committee on Foreign Affairs & Committee on Armed Services. The resolution recommends the use of the Magnitsky Act to prevent individuals credibly accused of war crimes and crimes against humanity from entering the United States or holding property in the United States, and the use of the Alien Tort Claims Act to prosecute individuals credibly accused of war crimes and crimes

Steve Cohenrepresenting Tennessee. Interestingly enough just days prior to Cohen co-signing the letter on Sri Lanka, a Missouri man was charged for threatening to kill Congressman Steve Cohen in January 2021. Never been to Sri Lanka.

Let us breakdown the allegations in their letter and try to make sense of them.

“governments failure to honor its commitment to truth-seeking and reconciliation”

A government is elected to power by the people of a country. That elected government has to honor commitment to all of its citizens first. What is the truth-seeking these Congressmen wish. What is the truth they know or do not know or do not wish to know. Are they not aware that Sri Lanka was carrying out its legitimate right to defend itself and its citizens against a terrorist movement. Do these signatories not know that LTTE killed all ethnic groups living in Sri Lanka including foreigners, including a foreigner on foreign soil (Indian PM Rajiv Gandhi) What is the reconciliation these signatories blabbering about? If the conflict was against terrorists and a terrorist movement – post-conflict, why should a sovereign government have to reconcile with terrorists. We have repeated stated that Sri Lanka’s conflict was not an ethnic conflict. The conflict was not between Sinhalese or Tamils. If so why would LTTE who were all Tamil, end up killing thousands of Tamils not only in Sri Lanka but overseas as well. These Congressmen may like to look up all of the LTTE killings of Tamils in Paris, UK, Canada by pro-LTTE elements.

“resulting in over 40,000 Tamil civilian deaths”

Where did these Congressmen get this number? Did they count the dead? How sure are they that these dead are “Tamil civilians”? How about these 9 signatories answering these questions first!

The entire letter is like a cut and paste of the parroting propaganda repeated by entities associated with pro-LTTE groups & lobbies.

It is a pity that with the FBI and US State Department having enough dossiers on LTTE and LTTE groups operating overseas, not only are they allowing lobbying and lying but they do not mind some of these banned groups to even speak publicly with the terrorist flag next to the US National Flag. Oh well, that is the wish of the world’s self-appointed policemen.

What is equally ironical and farcical is these 9 Congressmen speaking highly of the UNHRC, is the very body that the US Government walked out of calling it a ‘cesspit of political bias’. Oh well, who are we to argue with the mighty USA.

Nevertheless, what the parroting lying lobby completely ignores is that not only is the UNHRC Resolutions legally questionable, the allegations made are equally questionable and rotate around lobbied allegations and stories without facts and ‘witnesses’ whose identities are kept confidential for 20 years by which time the harm is done and innocent people are likely to get charged for crimes they did not commit by witnesses who probably do not even exist, just like the bogus dead who have no names, no identity, no families and there are no skeletons even.

It’s been over 10 years now and by now 40,000 names of ‘dead’ people should have been logged but other than LTTE dead and verifiable Tamil civilian dead the ghost figures that these Congressmen are writing about remain just ghost guestimates.

According to Murali Reddy an Indian journalist who was travelling with the armed forces throughout 2008-2009, the last batch of Tamil civilians who fled LTTE-occupied zone were 80,000…..‘by the night of May 15 there was no civilians left in 1.5sq.km area the Tigers were boxed into’. It was because there were no civilians that the International Committee of the Red Cross who were the only other outfit present inside the war zone decided to suspend humanitarian operations on 15 May 2009. If there was no civilians inside the 1.5sq.km area those making allegations of 40,000 must prove they were killed before15th May 2009 & the only party that could affirm such would have been the ICRC or the embedded journalists & none of them have made any such bizarre evidence-less allegations except people living overseas who were nowhere near the war zone. To make up for this lie, they are creating ghost witnesses or enticing people to lie with promises of green cards!

Please don’t do to Sri Lanka what was done to Serbia – ’40,000 dead’ fairytale ended up with less than 3000 dead and Serbian leader was projected a demon and imprisoned calling him a war criminal and 14 years later he was exonerated but it was too late – he was dead! A person went to his grave wrongfully accused by the world based on malicious false propaganda, lies and lobbying. Let that not happen to Sri Lanka.

We hope that these US Congressmen can at least name the 40,000 dead – without this basic fact no one can be charged with murder or war crimes.

Part 2: Responding to the allegations in the Resolution against Sri Lanka by the Congressmen