Ambassadors – Britain, Netherlands, Norway, France, Australia, South Africa, Italy, and Canada – what is the diplomatic charade you are playing in Sri Lanka? 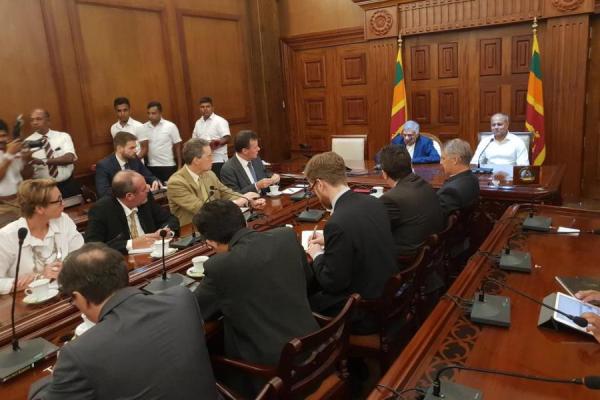 On 26th October 2018 a President elected by 62lakh citizens decided to sack the Prime Minister & appoint a new prime minister. He also decided to prorogue Parliament & days later dissolved parliament. All these decisions were taken within the country & had no public protest except for the hysteria from the usual culprits that included the Western/Indian diplomatic circles & their media not leaving out the locals funded by them. It was nothing unexpected too. All nations need not be reminded that Sri Lanka is an independent & sovereign country. We do not need to get permission from any foreign country when taking domestic decisions. We no longer have Viceroys. There was no bloodbath that media desperately wanted to promote & the majority of people wanted an election. It was the best way of voicing their choice. What better democracy is there than giving people the opportunity to have their say via vote.

Why have some nations set their pants on fire over what is clearly a domestic matter? Have the foreign ministries of these countries not trained these diplomats on protocols. We know that fairly junior officials are sent to our part of the world though intelligence officers are also part of the diplomatic contingent. We don’t tell these countries who to elect, how to elect, who not to elect. We don’t even issue statements when they are facing internal calamities too. It is for these countries to decide on their internal affairs.

We are following what these gentlemen white former colonists taught us as democracy, or maybe we have got it all wrong! Maybe like the Queen sending letters to Idi Amin, or West funding dictators & murderers & propping puppet states while also bombing countries to the stone age is what democracy really stands for! However, this is not Sri Lanka’s cup of tea. Declassified files on Uganda show UK support for Idi Amin’s coup in 1971, dissolving parliament & going on to killing 500,000 people! & UK is singing hosannas for democracy now! We can give countless more examples of the violations committed by these countries pretending to be paragons of virtue in the international arena.

Sorry to disappoint you, but most of our people are well read, they keep abreast of happenings around the world, they look at the larger picture & they are able to see the miscreants at play & the invisible actors & their agendas. Thankfully, we are not a nation that falls for candle lit vigils.

8 diplomats (Britain, Netherlands, Norway, France, Australia, South Africa, Italy, and Canada) decided not to attend the meeting called for by the new Foreign Minister to ‘register their protest’ over President Sirisena dissolving parliament. The likely instigators US, EU, India, Germany sent junior representatives which is virtually the same as not appearing – now what does the dissolution of parliament have to do with these diplomats? They are not sent to Sri Lanka to determine if we can dissolve or not dissolve parliament. If so, then why do we need to elect a President?

None of these 8 countries would wish to be reminded of their obnoxious record sheet of ‘democracy’ so please before pointing a finger remember there are 4 fingers pointing back at you!

Why do western media keep referring to Rajapakse as pro-China, does that indirectly mean that any leader in Sri Lanka has to be only pro-West? This is rather silly especially when these are very countries promoting international relations. And if all leaders are pro-West there is no problem & everything is honky dory!

Diplomats need to be re-read their job description, they need to be reminded of diplomatic protocols & the no-go areas for interference & intervention. It is not that their own countries are 100% perfect either – they preach law & order to us & more gun holding maniacs are shooting innocent people than the terrorists they are going after, they preach about democracy & their MPs are caught in welfare expense scandals, they preach human rights & are keeping people in secret torture chambers denying even a lawyer. So, please don’t preach what you do not practice.

We appreciate that at least 20 heads of mission including China, Pakistan, Cuba, Turkey & Afghanistan turned up for the meeting and for attending these nations will end up getting the West’s bricks! Super democracy.

Let us remind these countries that President Sirisena hurriedly dissolved parliament in June 2015 just 160 days after becoming President. At the time it was rumored that the decision to dissolve parliament came following advice by US envoy to prevent the tabling in Parliament of the COPE REPORT which would have held the ousted PM & the foreign Governor Mahendran directly responsible for the Central Bank Bond Scam. With that dissolution the bogus national government also ceased to exist. Why didn’t these envoys make the same drama in June 2015 as they are now doing especially when the 100 day promise was to dissolve parliament on 23 April 2015!

Sri Lanka is an independent country. We have regular elections. Governments come & governments go – the same government is not required to stay in power & no western envoys can expect only their puppets to be voted to power.

Apart from the locals that are funded by foreign governments/NGOs and the cronies of parties, the general public whatever party they belong to are happy that parliament has been dissolved. There is absolutely no public unrest, no ‘bloodbath’ as is being drummed by western media. So what is their problem if Parliament is dissolved & elections are announced.

We have never heard anything as bizarre as democracy preachers going to courts to oppose people going to vote! If they have an issue with the removal of PM why did they not dispatch their local cahoots to courts against that decision instead of dispatching them to file FR’s against holding an election.

By their actions, the world is only laughing at the conduct of the diplomats representing the US, UK, EU, India, Canada, Australia, Italy, Norway, Netherlands, France & South Africa probably their citizens do not know the embarrassment these diplomats are causing their countries by their tantrums interfering in the internal affairs of nations!