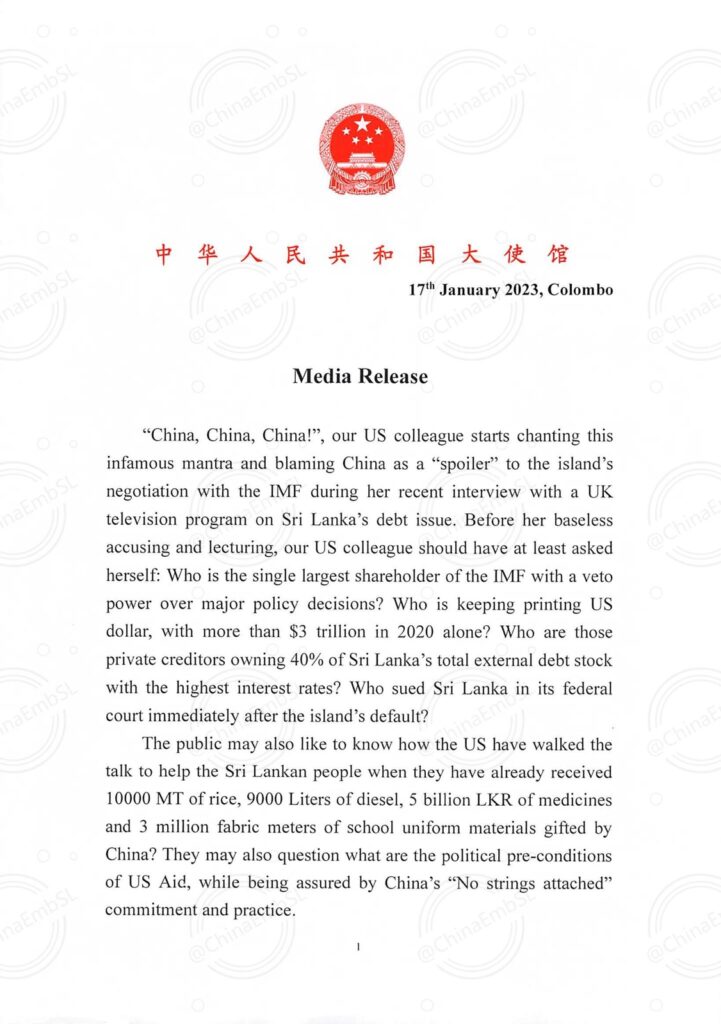 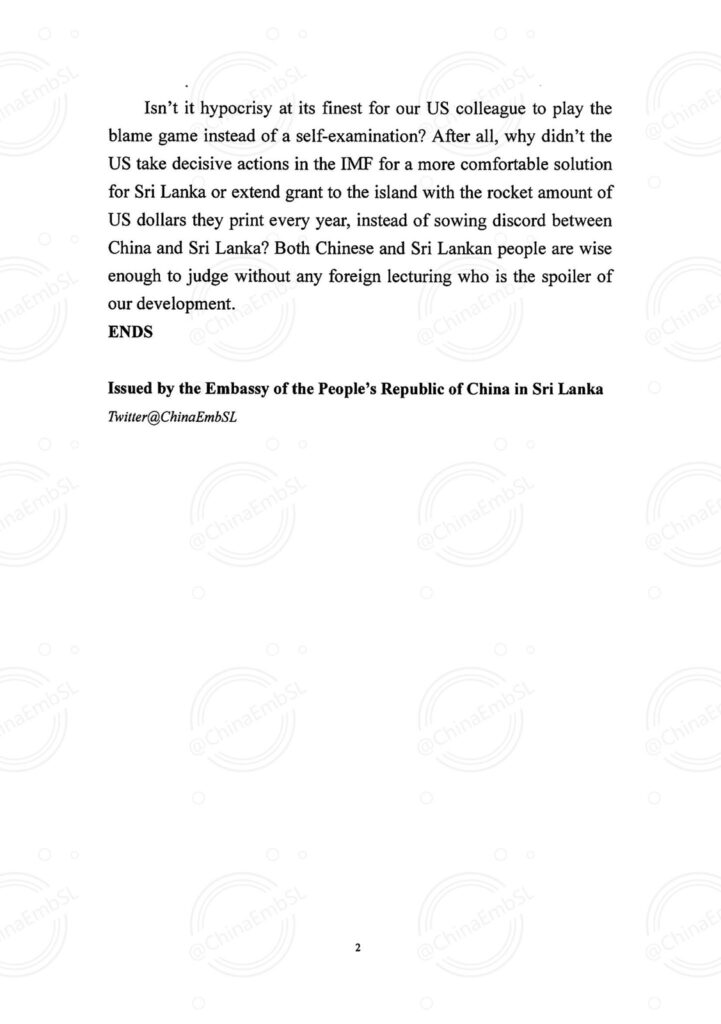 The US is using all its local sources of influence & sponsorship to present the notion that China is obstructing a deal with the IMF with clear intent to strike a wedge between the two traditional friends. It is unfortunate that these false notions are even being spread by so-called “educated” Sri Lankans too. It sadly reflects, their inability to look at issues unbiasedly. The Chinese embassy in China has come out with a no-beating about the bush statement to openly voice that China is aware of US gameplan & objective.

Sri Lankans have failed to look at all of the interventions and interferences by US or foolishly believe the country that illegal invades & occupies countries, install puppets & assassinates their foes or funds regime change will not apply same cut & paste tactics in Sri Lanka.

The Chinese embassy has openly accused the US ambassador in Colombo of not attempting to help Sri Lanka reach a viable solution & instead getting up to its infamous tricks.

How many are aware that it is the US veto powers that hinders reforms in the IMF?

How many are aware that the US Congress blocks ratification of an agreement reached in 2010 by member states to double IMFs lending resources? This agreement included redistribution of quota shares which US Congress declined to approve.

US is the only state with veto powers in the IMF.

IMF is held hostage by the US executive & legislature & used to advance US foreign policy. US veto power was part of creating the IMF & US uses it to block nations rather than provide leadership.

The Chinese embassy statement has also advised the US ambassador to ask herself who bought the majority of sovereign bonds in Sri Lanka with view to receive high interest which represented 40% of Sri Lanka’s external debt – these were all US firms.  These were the very companies that congregated & ran off to US court to file cases against Sri Lanka following declaration of default.

The media release by the Chinese embassy on 17th January 2023 began with the chorus that US funded locals are paid to sing “China, China, China” – a mantra meant to be chanted & spread a false notion that China is responsible for Sri Lanka’s economic situation.

What needs to be reiterated is, that while international monetary institutes may have lured Sri Lanka with loans, it is totally the fault of Sri Lanka’s political leaderships, policy advisors and other pundits who have kept the loans piling, who have not insisted on implementing alternative local means of growth & sustenance & devised ways to cost cut reducing imports, increasing exports & generating revenue.

The Chinese embassy statement also stated that the Sri Lankan & Chinese people are smart enough to understand who the real saboteur is and perhaps it is time the rest of the disillusioned Sri Lankan populace also woke up to these ground realities without falling prey to propaganda and western-funded media campaigns.