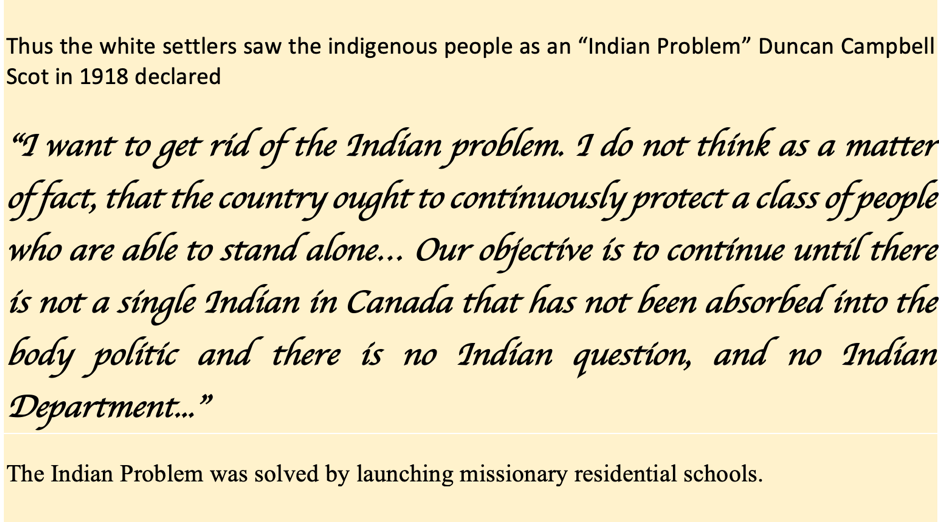 Why is Canada not commemorating Canada Genocide Day in memory of all the indigenous Natives it killed? The National Inquiry Missing & Murdered Indigenous Women & Girls found Canada guilty in 2019? Is it unbelievable that Canada preaching human rights to the world is found guilty of Genocide? Why is Canada shy to use the term “genocide” for its crime but allowing the use of term “genocide” to recognize May 18, 2022 as Tamil Genocide Remembrance Day without any evidence of genocide taking place in Sri Lanka? Given that Canada birthed the concept of responsibility to protect, why is the world silent on the continuing discriminations to the indigenous natives of Canada? Canada’s genocide allegation encompasses all that the term genocide constitutes – inflicting mental/physical harm(sexual abuse & mistreatment of children in Canadian residential schools), imposing living conditions by starving children, inadequate water, food & medical care, imposing measures to prevent birth (forced sterilization) All these are well documented unlike the fabrications drummed by LTTE Diaspora against Sri Lanka. Canada intended to destroy the indigenous people physically, biologically & psychologically. Sri Lanka’s Tamils are holding plum positions in public & private sector as well as monopolizing industry sectors across Sri Lanka.

Canada is a created country.

Canada was occupied by indigenous people for well over 12,000 years.

Canada decides if to give “Indian” status & the rights they should enjoy.

Canada’s Indian Act does not include the Metis & Inuit people – this is how Canada treats its minorities.

Canada erases the Indian Status to indigenous women who marry a non-Indian.

Canada also denied these women from voting & running for elections.

The invaders gave “citizenship” to the natives only in 1951

The invaders disallowed natives from moving out of these reserved lands without passes.

These reserved land still exist & are governed by the Indian Act

Is it a surprise that Canada supports LTTE’s bogus homeland theory & usurping of land?

Having taken over native land, Canada’s “SOLUTION” was to force indigenous people to assimilate as per their rules/regulations/culture/systems. All that the indigenous people cherished as traditions were to be erased from history.

Residential Schools were in operation from 1600s even before Canada was created.

Residential School in Saskatchewan closed only in 1996.

Not feeding them & making them vulnerable to diseases

The system was criminalized & prohibited eventually.

Has Canada solved what Canada did to the Indigenous People by its Truth & Reconciliation Commission or its National Inquiry into Missing & Murdered Indigenous Women?

In the case of Sri Lanka, we demand to know where the evidence of killing is?

The allegation is that 40,000 or more has been killed?

Where are the dead bodies?

Why are those making the allegations UNABLE to name the dead?

Where are their skeletons?

Canada has named 4 persons – 2 are former Presidents, 2 soldiers – first soldiers case is over 20 years old. Is Canada implying this one soldier out of over 200,000 soldiers engaged in the final phase of the war, killed 40,000 or more Tamils? These allegations are getting ridiculous by the day & when a developed nation like Canada bans individuals sans evidence, it makes a mockery of Canada’s legislature.

The hypocrisy is when Canada, a country that was created illegally by usurping land & carrying out a program of annihilation of the natives & not even declaring a day to accept and apologize for Canada’s abuse of natives, which is still ongoing, Canada sees fit to ban individuals without evidence.

Canada’s federal govt even denied funds in 2009 sought by the Canadian Truth & Reconciliation Commission to find mass graves at these residential schools.