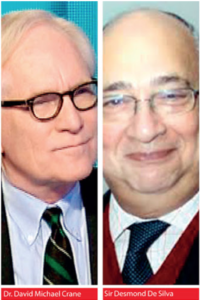 The Mahinda Rajapakse government sought the legal opinion of Prof D M Crane and Sir Desmond de Silva on the legal issues pertaining to the use of human shields and hostage taking by the LTTE. Their legal opinion sheds to pieces the findings of the PoE and the OISL as well as the OHCHR Heads reports and their insistence on war crimes tribunals against Sri Lanka. It is a good wake up call for all parties to realize that the nonsense of dramatic propaganda must stop and that the UN & UNHRC are duty-bound to look at the legal aspects of a non-international armed conflict before concluding that war crimes have been committed by a sovereign state as is already seen by the biased statements coming out of the mouth of the OHCHR head and his reports.

{ Clearly neither the PoE, the OISL or OHCHR head bothered to even look at these key factors before concluding Sri Lanka’s military had committed war crimes. On the part of a supposed to be unbiased entity the UN & UNHRC has been exposed }

Legal status of the Conflict

Discussion 1 : Did LTTE attempt to immunize its military leadership and assets by criminal act of hostage taking and internment of civilians near areas of strategic importance which is an international crime of Human Shielding?

Discussion 2 : Is there evidence to suggest LTTE fired artillery at the SLA from the NFZ from the very outset of its creation?

Discussion 3 : When government’s military operation and customary principle of Proportionality was affected by LTTE’s intentional use of civilian hostages as human shields so that loss of life would discredit the government?

Discussion 4 : Did civilians lose their protected status by voluntarily becoming hostages’ to create a human shield to assist LTTE to gain military advantage?

Discussion 6 : Did the customary principle of distinction relative to the SL Army’s operations get affected by LTTE’s decision to use combatants not in uniform to enter conflict with intent to gain military advantage by making it difficult to distinguish between combatants and civilians or to blur the distinction between civilians and combatants?

Discussion 7 : LTTE’s liability for perfidious conduct and forced recruitment of civilians, execution of civilians trying to escape and placement and firing of their weapons from within civilian and hospital zones – who ?

These excellent points clearly shift legal blame to the LTTE and away from the hysteria generated over media by LTTE funded campaigns to which very powerful and influential people and organizations have played a part. These legal opinions are far superior to the shoddy reports that have come from the UN/UNHRC wherein the biased and vindictive nature is made clear. Is this racism coming to the fore?

What is this kangaroo court being recommended likely to do and that too the recommendations come from countries that have still to atone for centuries of racist colonial crimes they have committed. People of Sri Lanka must seriously wake up to realize that our soldiers did not commit war crimes and as such we should not agree to hold any type of court whatsoever. In so agreeing we are only paving the way to create a worser situation than in 1815 – we may not have a country at all. All these propaganda and humiliations is to make us feel guilty and repent? Why should we when clearly the international experts point all guilt to the LTTE. Its time that all of us now stand united and defend our forces without believing the lies that have been circulated globally only because the party that faces the guilt has the power of money and influence. Truth cannot be compromised by lies and money. Wake up Sri Lankans…