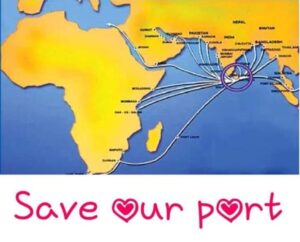 Sri Lanka is never short of controversy. Colombo East Container Terminal is at the centre of a major national crisis which would decide the future of the current government and would decide the country’s future. The issue has traversed this far partly as a result of clueless politicians, corrupt public officials, wheeler-dealer advisors and not soliciting the advice from correct quarters. First and foremost, any government elected to power by the People are duty-bound to protect the sovereignty of the nation and not its neighbor. Secondly, any decision taken has to be in the best interest of the nation and not because of geo-political pressures. Politicians’ role is to find ways to come out of political issues and the diplomats, advisors and think tanks are there to find alternate ways to mitigate issues.

Let us take each argument

In May 2019 a Memorandum of Cooperation was signed between the Yahapalana Government, India & Japan. There was no mention of Adani in this MoC

Therefore, referring to the May 2019 MoC to justify giving Adani ECT is an argument that cannot be accepted. When to this 49% Japan is not even involved presently.

The MoC was signed between India-Sri Lanka-Japan and not between any transshipment providers.

Shipping lines are private companies who berth in Sri Lanka for their advantage not to please or displease India or even Sri Lanka. Sri Lanka handles a large volume of transshipment because it is advantageous to the shipping lines. It is shipping lines who decide where they dock and why and not governments in power. Therefore, the claim that India will remove transshipment if Adani is not given ECT is false unless the Indian Government will subsidize the shipping line for the loss of money to bypass Colombo Port & dock elsewhere.

Price & Time are key factors that India or Singapore cannot challenge Sri Lanka with. This key factor must be understood by all.

The commercial and strategic value of Colombo Port has yet to be understood properly by politicians and key advisors. The combination of PRICE, TIME, DEPTH and SERVICEwill provide a competitive edge over all the upcoming Ports in the region. DEPTH is the factor Sri Lanka needs to complete to win that competitive edge.

These are areas Sri Lanka can attract shipping lines and Colombo Port has every ability to do so especially with the Port City Financial Hub also coming up. The Hub Port status enjoyed by Colombo Port with ECT in full capacity under its own management would mean high dollar income to the ECT/Colombo Port. This is what the 23 Trade Unions are trying to convey to the decision makers and it would be good for the Cabinet Sub-Committee to listen to their arguments before presenting a paper without their inputs landing Sri Lanka in a bigger calamity politically & commercially.

Decades ago India & US were not on friendly terms. Today, India is a strategic partner of the US. Decades ago India was angry at Sri Lanka’s pro-US stand. This was round about the same time India helped train and fund Tamil militancy and Sri Lanka weathered 30 years of terrorism. The IPKF was forced upon us. It was during a change in government that luckily made India agree to withdraw the IPKF when asked to do so. Indo-Lanka Accord signed in 1987 promised to disarm LTTE and end the conflict within hours. All main clauses of the Accord were breached by India but India continues to make demands. Even after the breach of agreement India has still to return the oil tanks in Trinco. These scenarios are valid reasons for the Sri Lankan public to be cautious of dealing with India. Denying India what India demands before signing on any dotted line is far better than a diplomatic and government-government warfare in the future. We shirk to even imagine such a future scenario.

This is so because India’s strategic partnership with US encompasses directly challenging China in the open seas and US and Indian military are regularly conducting naval exercises with Japan & Australia. Ports will hold a key role in this partnership. We saw the large influx of war ships arriving at regular intervals in Trincomalee and the signing of ACSA with US and SOFA is in the pipeline as well. Donor agencies insist on PPP with external parties to meet their agenda and advantage. Sri Lanka should know to negotiate deals to its advantage not to please the other party.

The ports & airports are the entry exit points to a country & the keys to these points must be held by the State. International trade is dictated by buyers and service depends on the demand. Thus, a commercial port has to develop as per the requirements of the shipping lines and with Sri Lanka situated in the central trade lane, Sri Lanka naturally offers an automatic best place location for any shipping line (main lines/feeder lines). Thus, it is other add-on factors that Sri Lanka needs to provide. It is unfortunate that all of Sri Lanka’s development proposals end up getting strangulated due to petty politics and political prostituting. We have wasted many years in not bringing up Colombo Port as well as other Ports around Sri Lanka to the level it should have been brought with strategic thinking and strategic planning & global marketing.

It was as a result of lethargy, corruption and another instance of prostituting that Queens Terminal went to P&O/JKH in 1999 for 30 years and the lease concluding in 2029 with the Terminal returning to SLPA once again. Ironically the same players that cut this deal are in office currently. With SAGT terminal exactly next to ECT, this would mean the SLPA would have a BOX TERMINAL. There are only 4 such terminals in the world. This would be another strategic asset to Sri Lanka bringing dollar revenue and would be able SLPA/ECT to even compete with CICT giving better offers to shipping lines. The importance of ECT is its berthing capabilities and its services and operations can be developed as an ongoing exercise as Port engineers and Trade Unions are assuring to make the ECT a profitable entity under 100% Sri Lanka’s ownership and control by 2025.

Why India wants to suddenly develop ECT? Why Adani?

The proposal to develop Colombo Port came during the 1stterm Presidency of Mahinda Rajapakse. India did not show any interest in developing ECT. India’s sudden interest came with the regime change it engineered with US that saw a plethora of Indo-US influence in Sri Lanka. As pointed out by the Trade Unions, the GoSL must be alert to the corrupt nature of Adani who is under investigation for money laundering and corruption even in India. As close associate of Indian PM, the Unions ask a very valid question – what if the Modi Government collapses and the new Indian government is anti-Adani, what is the outcome of influence Sri Lanka will have to weather. GoSL must also note that when India has thousands of people dying of hunger on a daily basis, when areas of India are still living in the cave days, why would India wish to nominate a very close associate to take over 49% of a strategic port, unless it was for India’s strategic purpose rather than to help Sri Lanka develop its port. We must not be naïve to the fact that India is also developing ports to attract shipping lines. Why would India wish to develop Sri Lanka’s Port which would automatically be a first choice for any shipping line over India’s new ports, given the saving in cost and time?

Why would India and Adani give $700m for our Port without having undisclosed strategic plan which Sri Lanka is unlikely to benefit from!

Is Adani and India giving $700m just to make Sri Lanka happy unless their investment is something different to what we think. How long will Adani demand to stay in Sri Lanka to recover this ‘investment’. What if India is killing 2 birds with one stone by demanding the ECT as a political threat but with intent to ensure ECT development never gets off the ground and giving India the time it needs to build its ports and even entice shipping lines to transfer transshipment at a lesser cost than what Sri Lanka offers. Marketing a port has all sorts of possibilities. We only need to improve the DEPTH of the ECT as all other factors are to our competitive advantage. When Sri Lanka’s decision makers are only interested to put India First, what is our future?

National security of Sri Lanka has to matter far more than making investors happy. With the Port City emerging as a future revenue centre, Sri Lanka has to make sure its next door key commercial port is also kept secure. Giving 49% stake to a corrupt Indian is going to get Sri Lanka nowhere. It also makes any to ask, if 49% is not a sale or a lease, but Adani is giving $700m – what is this deal called!

It is also important to look at how India is separately exerting influence over Sri Lanka – Palaly airport, KKS & Oluvil harbors, IOC, Trinco Oil Tanks and exclusive economic zone which is off limits to Sri Lankans even military, rising influence over Estate Tamils by India, interfering even in the Jaffna university – these cannot and should not be taken lightly. Where India has to take decisions, India doesn’t mince words or is even bothered about angering anyone – the denial of credentials to the guru of Sri Lanka’s India First policy is one good example where Indian bureaucracy dictates to its politicians and is not bothered about making Sri Lanka unhappy.

Sri Lanka is not on a wicket to be dictating to anyone, however, Sri Lanka must maintain a dignity that must return to the foreign policy of Mrs. Bandaranaike who stood her ground on all matters and was respected for doing so by leaders of both Eastern and Western blocs. To this day, she is held in the highest esteem by all including India whom she had to guts to say no to!

The factors presented to the public as reason to give Adani ECT is unacceptable and the issues likely to emerge from this handover is going to be far more complicated and difficult for Sri Lanka to handle. We can part ways before signing on any dotted lines. But if India is given control over 49% of a key port which would entail loss of jobs to Port Workers, management in Indian hands and trouble inside the Port, that would prevent shipping lines from calling at Colombo Port, gaining this $700m giving 49% becomes meaningless. We are going to be saddled with Adani until he is satisfied that he has earned his profits and we don’t know how long he will want to remain and how much trouble he would cause as he is presently doing with Indian farmers!