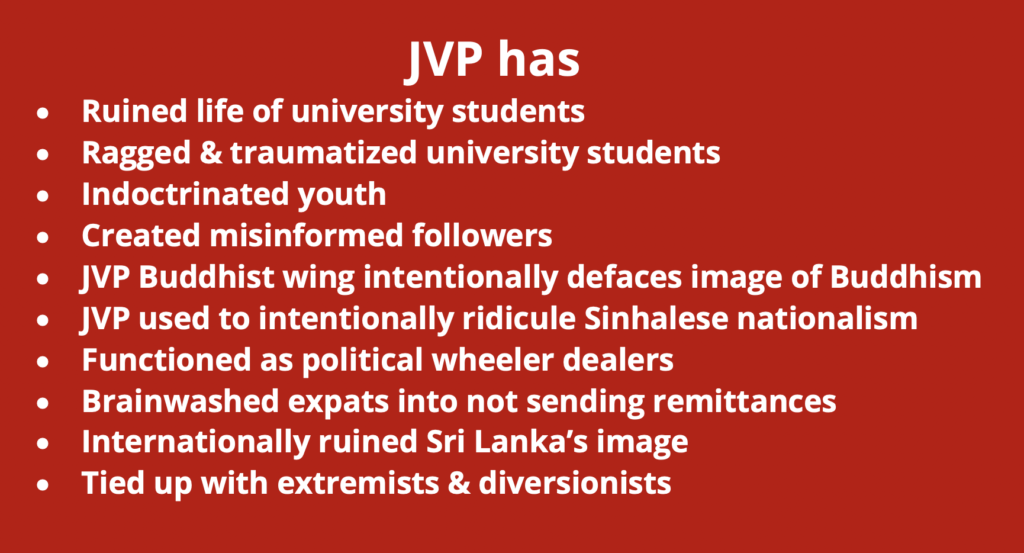 Did JVP naturally emerge or was it created in response to the then governments nationalization programs? Who formulated the “5 Lectures” that indoctrinated Sinhala youth to become members. Who advised JVP to expand in universities and attempt to win sympathy of the armed forces? Who wanted JVP to attack police posts? Who funded the ‘education camps’ in remote areas of the South & southwestern coasts? Who helped JVP create secret cells? Who christened the name Janatha Vimukthi Peramuna? What is the real objective of JVP & now JJB

JVP began recruiting & training its members in camps across Kurunegala, Akmeemana, Tissamaharama, Epitiya & Anuradhapura. Lectures were in cemetaries. By 1971 the JVP had 10,000 members.

How much of these 5 elements are part of JVP ideology today.

Each cell had 5 members with a leader.

Cells were given shotguns. Each member had a gun with 10 cartridges. Each member had uniforms, military boots & haversacks. Cell members made home-made bombs. Victor Ivan (Podi Athula) lost his left hand when a grenade exploded while testing. On 5 March 1971 explosion in JVP bomb factory resulted in 5 deaths.

The JVP had its own paper.

The JVP carried out robberies to raise funds – the same methodology adopted by LTTE.

Were the tuition teachers of LTTE & JVP the same?

Wijeweera was arrested on 13 March in Ampara & transferred to Jaffna prison. On 16 March the GoSL declared emergency. JVP leadership decided on 2 April to dispatch 500 cadres to storm the Jaffna prison & on 5 April all police stations were to be attacked to cripple the govt.

The then commander of the armed forces was Gen. Sepala Attygalle.

Mrs. Bandaranaike sought assistance from friendly nations – Pakistan was first to respond sending troops and helicopters. Indian troops too arrived. Indian Navy guarded the naval coasts as SL Navy was deployed on the ground. It was a rare event to see Pakistan, Indian & Sri Lankan forces jointly attempt to handle the JVP. Ironically, the same Indian army ended up training LTTE against the Sri Lankan Army.

JVP insurrection was quelled after 3 weeks and amnesties were offered in June 1971 over 20,000 were given 3 months rehabilitation & released.

What made Wijeweera & JVP begin 2nd insurrection in 1987 when it clearly had created a political path for itself?

Presuming to be anti-capitalist, how can JVP profane to fool its followers but be partners of neo-liberals. The current JJB party was created in August 2020 to peddle neoliberal agendas under the façade of socialism. This conflicts with what JVP advocates.

Tapping and manipulating the youthful vigor and energy of youth, JVP has ruined young adults inside the universities with their unions, ragging and other pressure groups. The JVP ideology has physically and psychologically impact university going youth and has affected their employment and attitude to life and socio-politics as well. It is only later years in life, that they have realized they had been misled but a little too late.

JVP’s role as deal maker to political parties providing campaign ground support leaves us to wonder how many of JVP followers approve JVP’s role in helping bring other parties to power.

Given the obscure path JVP leaders are taking, is it not a crime that thousands of youth perished, gave up their lives for the JVP denying their families the joy of seeing them become somebody’s in life.

The JVP misguided youth in 1970s and 1980s and are continuing to do so. JVP must be held accountable not only by the Govt but by the JVP youth themselves & their families too.

JVP youth perished in 1970s for no reason.

JVP youth perished in 1980s for no reason.

JVP are continuing to target youth even now.

It is only a matter of time more youth will meet their waterloo as a result of JVP brainwashing.

LTTE did the same to Tamil youth & JVP are doing same to Sinhalese youth.

Together LTTE & JVP ruined the brains of Sri Lanka. How many Sinhala & Tamil youth who joined the LTTE & JVP perished when they could have made a name for themselves and made their parents proud?

JVP is not what it professed to be just like LTTE.