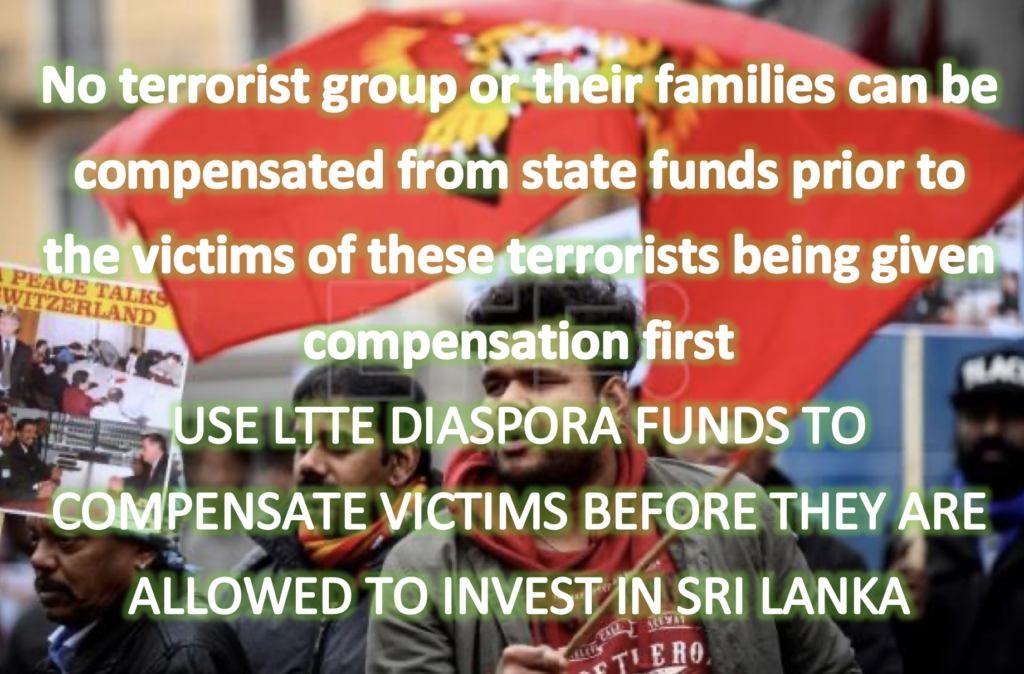 The South African Truth & Reconciliation Commission that was bragged & boasted despite its failure, recommended compensation to victims though it was given no mandate to award such. Leaving aside awarding – where do they get the funds to award such compensation? Sri Lanka’s Parliament passed the Office for Reparations Act in 2018 (59-43 vote) insisted by US & allies. No terrorist group or their families can be compensated from STATE FUNDS prior to the victims of these terrorists being given compensation first. LTTE fronts must be asked to use their funds to compensate victims of LTTE before they are allowed to invest in Sri Lanka.

The LTTE comprised a ground force led by Prabakaran and an international network that raised funds. LTTE’s international headquarters was in London while LTTE had offices in Canada, US, EU, South Africa, Australia and operated from India & other nations of Asia. All of the entities operating outside Sri Lanka functioned discretely probably due to fear of Prabakaran. Most of the entities known as LTTE fronts were created after Prabakaran’s death & elimination of LTTE ground force along with its top leaders. Combatants of the LTTE managed to flee overseas as refugees, some were helped to leave the country with assistance of foreign-funded NGOs on pretext of training etc. Others applied as refugees or asylum seekers.

In May 2009 – Sri Lanka’s National Army ended 30 years of terrorism in a non-international armed conflict by LTTE that remains banned by Sri Lanka & 32 countries.

Successive resolutions at the UNHRC aims to bring restorative justice to LTTE terrorists while applying retributive justice to Sri Lanka’s National Army using isolated incidents which have not been found guilty in any court of law.

Sri Lanka was never given any breathing space to recover from 30 years of terror by the very countries & international agencies that did nothing to stop LTTE terror but came forward with all sorts of templates and guidelines to handle post-war Sri Lanka, simply because they wanted to have some reason to influence Sri Lanka.

It is these victims that should be given compensation not LTTE terrorists.

LTTE combatants comprised only Tamils though LTTE was supported by non-Tamils including foreigners & the Church covertly & overtly. The GoSL failed to launch investigation into TNA and other political parties & politicians for their links to LTTE as well. The logic is anyone is accepted into the political system so long as they cease to separate Sri Lanka or involve themselves in acts of terror.

Victims must be compensated but who are the victims needs to be first defined.

Compensation must go to only civilians who were not involved in any LTTE terror act at the time of their death & to every person LTTE killed & any persons who died from military cross-fire.

Next question is – who is paying compensation?

66 UNPers did not attend Parliament to vote for the Reparations Bill.

In other words they did not wish to vote to give compensation to LTTE..

The Office of Missing Persons has no right to force Sri Lankan tax payers to give money to combatants of a terrorist movement that remains banned in Sri Lanka.

The taxpayers have already funded their rehabilitation and resettlement as well as given State jobs.

If anyone feels that former combatants & their families should be compensated – they are welcome to channel these funds to the GoSL to be disbursed to them.

No terrorist group or their families can be compensated from state funds prior to the victims of these terrorists being given compensation first.

Ideally, the LTTE Diaspora who collected funds for LTTE across 3 decades and continue to do so must be held accountable. The LTTE Diaspora kitty must have enlarged as a result of savings. They no longer have to spend for LTTE fighting combatants arms or ammunition or other logistics. Thus LTTE Diaspora kitty should be used to fund former LTTE combatants & their families as well as families of Tamils who were killed by LTTE before being used for ‘investments’.

A govt is doing injustice to the real civilian victims that LTTE killed. Claims of Sri Lanka National Army killing ‘civilians’ cannot be proved in either numbers or facts. So far UN has failed to differentiate

So long as UNHRC has failed to differentiate numbers and names all above cannot be given status quo as civilians and compensated with public funds.

LTTE cannot use their kitty to invest while putting the Sri Lankan tax payer in further debt to compensate LTTE & their families prior to compensating the victims of LTTE terrorism.

If LTTE Diaspora are willing to send from their international kitty – it should go to a National Fund that compensates the victims of LTTE first including Tamils killed by LTTE.

No country in the world compensates terrorists!