Has the “aragalaya” missed the bus

Sri Lanka has come to a stage where everyone is questioning everyone and anything. This has merits as it affords an opportunity to rethink & restart where we went wrong, who has to be held accountable, where do we start to change, how do we change & who can start the change. The change must start necessarily with all of us chipping in to rebuild our nation for not only this generation but for future generations. Pocket protests eventually led to a large number of people demanding ‘system change’. Their demands are however somewhat questionable and this proposes to encourage them to take up topics to leverage their case against the corrupt & bring true system change. Just as aragalaya are demanding solutions, the people are demanding solutions from the ‘aragalaya’ – it cannot just be a whining movement. The aragalaya cannot also end up doing what they accuse all govts of doing, in a different form/format.

When assets/resources were getting siphoned off & other treacherous anti-national acts were happening not many raised objections.

This was often camouflaged by diverting attention to the theme of corruption. The anti-corruption slogans pinpointed only select politicians & evaded pinpointing roles of others. This selective pinpointing did not solve matters & very few demanded accountability primarily because these corruptions did not affect people personally. When people’s lives were affected via shortage of fuel, gas, medicines etc did people finally awake from slumber.

What started out as pocket protests eventually became centred in Galle Face Green, which has been turned into a defacto village. Chapa Bandara in his geopolitical video clips claims the ‘aragalaya’ was pre-planned since 2020 when the President allocated the area for protests (which were non-existent at the time). One Pathum Kerner in a series of youtube clips claims he is the brainchild of the hashtag campaign being used. The Galle Face Green, the people’s personal space for peaceful assembly, has been taken over & turned into a campaign centre along different themes that have nothing to do with the current economic or political situation. The agendas within agendas is nothing that can be denied. So many are claiming patent for aragalaya – and these have hidden hands that steer them! 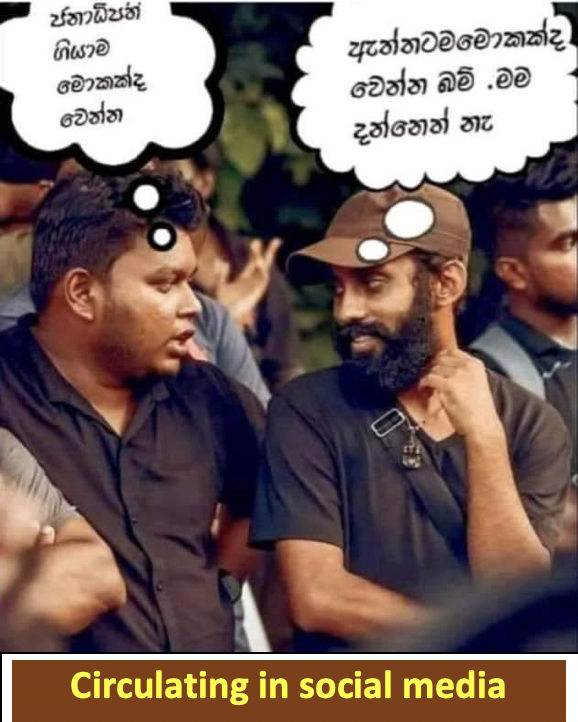 IF ALL CORRUPT ARE TO GO HOME — WHO IS NOT CORRUPT TO REMAIN?

#GoHomeGota kicked off its protests outside the President’s residence in Mirihana on 31st March 2022. It turned violent and resulted in the burning of public vehicles & damage to property. Arrests led to lawyers appearing free for the suspects & lawyers clapping after their release. It questioned their professionalism while sending a message to anyone attacking the government, that lawyers would come forward to defend them free of charge. It also led to protestors disrespecting the police, using foul language and even manhandling them knowing the lawyers would be appearing for them & clapping for them. The entire legal fraternity shares accountability for their role in the current law & order impasse across Sri Lanka which has demoralized the police & armed forces.

While the campaign started off demanding the resignation of the President, it spiraled to demanding the resignation of the entire parliament. Eventually, the Prime Minister was the only person forced to resign & was replaced by the former PM who was rejected by his own party in the August 2020 General Election but returned to Parliament undemocratically via the national list after over 1 year of bargaining with the UNP national list members. Not only has he become the PM but he has also been given post of Finance Minister. This will surely enter political history!

The foreign envoys are full of praise for him & takes us back to the times when he was sacked in October 2018 & the same envoys demanded he be reseated. There is a noticeable difference to the manner aragala team demand removal of the president against the present PM, who served as PM for 5 years previously where 2 Bond Scams under his direct watch took place. This scam was clear & evident rather than the ‘lu’ stories of corruptions being hurled at others. From the files produced by JVP leader, some should have indicted the current regime in the 5 years that yahapalana ruled since that government was formed primarily to take legal actions against the current regime.

While the diplomatic community are full of hosannahs for the sitting caretaker PM, they are also empathetic towards the aragalaya and take pains to ensure their ‘independence’ ‘freedoms’ ‘rights’ and what not are guaranteed. These ‘pressures’ obviously has the government ignoring the violations taking place – setting up structures inside a public venue, digging the ground in a public venue etc. Presume all this is of little importance, given the pressures they are able to bring upon the government, the next question is why they do not understand the need to first demand that the government does not siphon off the country’s national resources and assets?

While they attack the current regime, they hesitate to demand reversal of all agreements signed in secret (gas deal giving US monopoly, 3 islands to India, undervaluing other ventures & leasing) These are all items in the interest of foreign govts and their corporations which the aragalaya are not demanding to be annulled, if given and stopped from being given.

Let us not be naïve & realize that the current economic situation and the requirement to beg for more loans to provide for the basic necessities of the people, has to be paid back with interest. The people have been forced into a position that to survive, they are ready to give up anything without realizing the greater repercussions in the long run. These repercussions should be factored by the aragalaya brains, for they find fault with politicians, but the aragalaya cannot be silent if Sri Lanka’s key assets are resources are siphoned off just to live for the year, leaving nothing left for Sri Lanka thereafter.

Therefore, aragalaya must be first demanding the government think of ways to negotiate loans without having to give up the nations’ resources/assets.

No buyer takes the losses of a state entity. We are saddled with these losses.

The payment for sale hardly suffices to pay the losses or meets the annual State requirement, so we have to take more loans but we are not trying to increase revenues or make state entities profit-making with our own efforts.

If all 100 state entities are not in control of the govt – what do they tax, there will be no govt. If nothing belongs to the state, there is no govt and no politicians. Does this mean Sri Lanka will be led by international corporates? Will they provide for welfare etc?

So, why does the aragalaya not demand solutions without siphoning our resources/assets

Why does the aragalaya not demand alternatives without going to IMF/World Bank & becoming prey to structural conditions which do not target the rich but only the middle class & poor.

Why does the aragalaya not demand actions against so-called professionals who are equally corrupt, as per COPE sessions, many of the state entities were under doctors/lawyers etc. Aragalaya has only suggested actions against those who fail to meet annual targets.

Why doesn’t the aragalaya not demand constitutional amendments not for politicians to increase power but to have proper ratification process for international agreements/treaties & procurement guidelines.

When aragalaya wants uncorrupt clean parliament, shouldn’t they be demanding a change to the electoral voting system & criteria for voting. This demand has to be actionable for the 2025 General Election.

The politicians are arm-twisted from enforcing these – is it the same for aragalaya, by the same external forces. Is there a cap on what can be demanded & what is to remain undisclosed from public.

If the aragalaya turn above demands into a strong nation-wide campaign, then the people will certainly have more faith in them than the politicians or political parties.

The aragalaya has no leader. However, for any mass movement to continue – a leader must prevail. If the aragalaya aspires to lead the nation, they must do so politically & emerge as a political party. If they list pro-nation/pro-people/pro-sovereignty demands, the people will back them.