The Island published an excellent article by attorney Dharshan Weerasekera titled “Legal implications of Aragalaya protests” which was a stark contrast to the position taken by some BASL attorneys including its President. The article brings to the forefront a clash of perceptions. While some regard protestors storming the Presidents House/Secretariat, Temple Trees & PM’s Office & illegally occupying them as a triumph of democracy, many others see the long term repercussions & an affront to the rule of law by law of mobs. Unfortunately many in the legal fraternity including its President have chosen not to present the illegality of what took place giving people and protestors a wrong legal interpretation with dangerous future ramifications. After all, if they advocate mob rule, there is no requirement in the future for lawyers & judges too!

As Dharshan Weerasekera points out there is little voice raised by even academia or media on the collapse of rule of law that took place alongside the protests. Noteworthy is the statement signed by BASL President on BASL letterhead on 9 July 2022 immediately after protestors forcibly entered Presidents House / Presidents Secretariat / PM’s Residence Temple Trees / PM’s Office. The last para only called upon public to ‘protect public property’ nowhere was there a line indicating the illegality of the act. 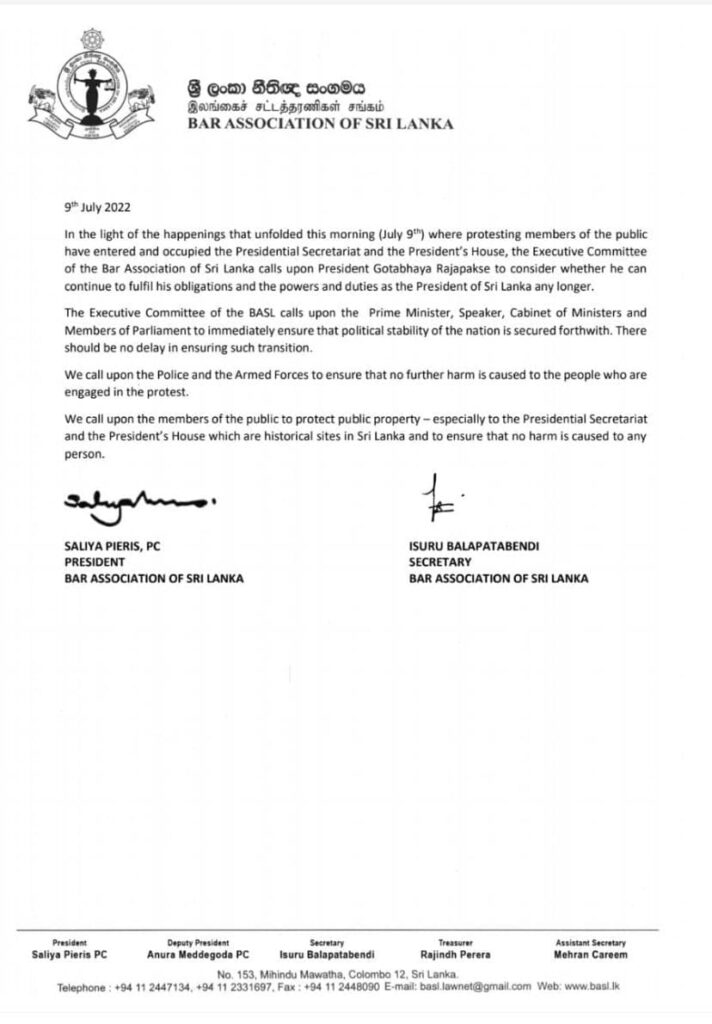 While anyone has a right to protest – protestors do not have a carte blanche to protest as they like, when they like & how they like. As Dharshan says the protests are illegal & ‘contravened the letter & spirit of the constitution’ embodied in Article 3 & 4 though some are defending the protests using ‘social contract theory’ advocated by Hobbes, Locke & Rousseau.

It is slowly dawning on many that the protests were nowhere near ‘peaceful’ either. What if a bunch of protestors decide to storm private companies, homes etc – would lawyers defend them pro bono?

Dharshan Weerasekera’s article is timely because he showcases the need to bring the correct version to public domain before behavior of the ‘Aragalaya” becomes formalized in judicial rulings in the future. This is certainly a dangerous scenario.

Protestors can be cheered for protesting without illegal occupation or for committing any acts that are considered illegal by law.

If protestors are cheered for storming public places & it is silently accepted, what stops protestors from even storming embassy compounds, corporates or private homes? Will they be cheered & celebrated as a triumph of democracy?

The actions of members of the legal fraternity is equally worrying. While they may argue that they upheld their personal wishes. They were performing official acts which required them to uphold the constitution first. What was the message these lawyers gave to the public to be in their ‘uniform’ and participating in a hand barricade, going to courts to release arrested protestors pro bono and even clapping and cheering when they were released?

https://www.dailymirror.lk/latest_news/Lawyers-protest/342-234582 – Lawyers protest. Given that there are corruption files against those that they accuse, why don’t they take up these cases pro bono on behalf of the protestors the legal way as is what their profession has taught them?

https://www.timesonline.lk/news-online/In-Pictures-Lawyers-come-out-in-support-of-protesters-at-Galle-Face/2-1137317 In pictures – lawyers come out to support protestors at Galle Face

https://www.dailynews.lk/2022/08/11/law-order/284803/counsels-withdraw-petitions-behalf-galle-face-protesters ultimately even petitions on behalf of protestors had to be withdrawn as rule of law had to prevail.

Why didnt the lawyers appear pro bono for MR Amarakeerthi Athukorala who was inhumanely killed on 9 May 2022?

Article 3 of Sri Lanka’s Constitution states “In the Republic of Sri Lanka sovereignty is in the People and inalienable.”

Article 4 of Sri Lanka’s Constitution lays down ways that people can exercise their sovereignty.

People can exercise their Executive sovereignty via electing a President.

People have to wait for an election to change or demand a fresh election. People do not have the authority to force people out of office by storming them, breaking the property, stealing property & illegally occupying them.

As Dharshan points out the people can exercise their sovereignty by electing or changing governments only not by “popular” uprisings.

The quick response is that people could not afford to wait 2 years to change the govt. Yet, there was constitutional provision to call for an election. Why didn’t the protestors demand this, he asks?

Dharshan also points out that RIGHTS go hand in hand with “RESPONSIBILITIES”.

Dharshan Weerasekera points out that Sri Lanka offers a lot of freebies & subsidies from healthcare, education, farming & is the country’s largest single employer. He cites that all who participated would have benefited in some form from the State welfare system. What Dharshan implies is that when the state was facing financial difficulties partly from factors beyond their control, taking to the streets calling for the ouster of the government was never an option or a solution as no one taking over had magical money to take Sri Lanka out of debt. 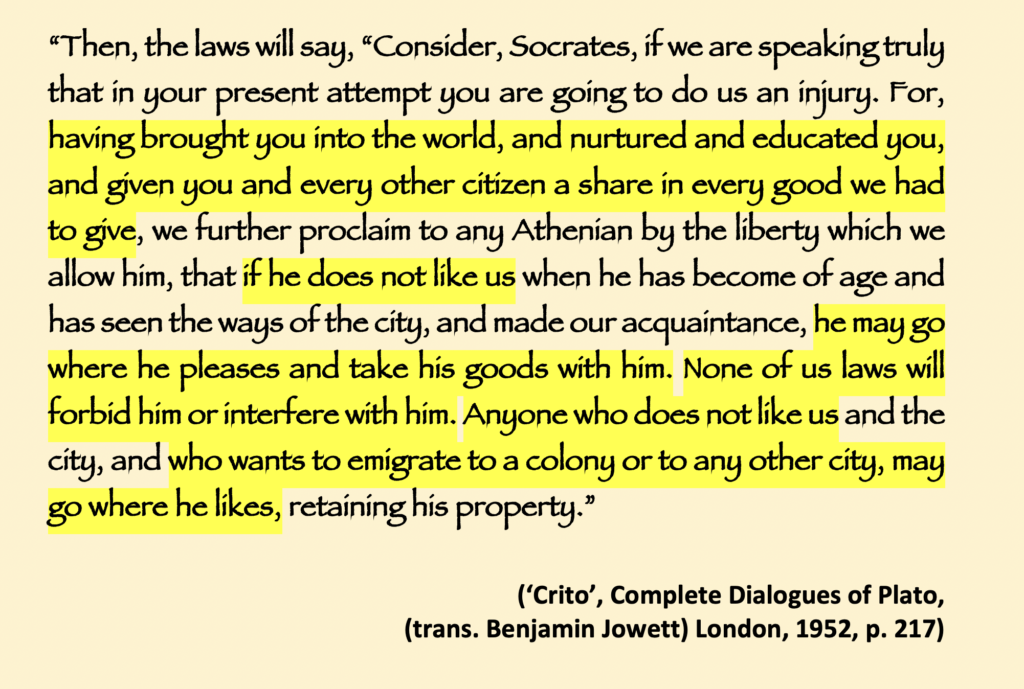 The quote is relevant for anyone who abhors the country of his/her birth can always leave & be domiciled elsewhere. The country will not stop anyone wanting to leave Sri Lanka. So why do the haters still remain & curse the nation?

The gang leaders, promoters & supporters of the aragalaya, many who behind the scenes funded the protests for their own hidden agendas & many who simply wanted anarchy as it benefitted them personally. Many of the protestors fooled into thinking & believing they were present to create history, did create history but not for the reasons that will be etched in history. When the true status of the protests & who actually conspired to bring about the collapse of Sri Lanka to enable Sri Lanka to fall to its knees & be dependent on the very entities that conspired its fall, the protestors & their supporters will be ashamed of their role. But it would be too late.

Dharshan Weerasekera says that the storming of Public places, forcible eviction of an elected President, forcing his resignation all constitute an illegal act.

The issue is why is one attorney publicly speaking about the illegality of the acts promoted as ‘peaceful protests’ while the attorneys given media prominence are taking the opposite view?

Is the perception of the media and these lawyers aligned with the protestors? Who else are promoting this perception & why?

Dharshan Weerasekera lumps the promoters of the protests & the protestors as well as the defenders in supporters of the ‘social contract theory’ which advocates a contract between people & their rulers, where the people surrender part of their sovereignty to the rulers in exchange for rulers to ensure the security & welfare of the people & rulers who fail this ‘agreement’ are justified to be ousted.

The above is being used by most aragala protestors & supporters to justify their protest claiming the former President exceeded his authority or failed his obligations to the people.

Dharshan Weerasekera claims the Locke, Hobbes theories related to changes taking place in their political systems where transition from monarchy to constitutional monarchy was taking place while Rousseau was related to the French Revolution.

Given that everyone has his own perceptions, there was a requirement to have an ultimate authority and if people were allowed to topple governments & chase out leaders, what was the use for elections? Where is the stability in such a country, if a group of people could converge backed by media & other financial backing decide to oust leaders they disliked?

Will such a scenario be internationally accepted? If Sri Lanka sets an example for others to follow, will that not result in anarchy across the world? Didn’t the Iraqi people storm its Parliament immediately after Sri Lanka’s debacle? Didn’t Sri Lanka’s debacle follow storming of Capitol Hill in USA? Will we see a trend. Will the sponsors create a global trend now that they have the template?

Dharshan Weerasekera asks a simple question – do people want to live in a country where there is rule of law, where there are elections to elect or reject representatives or do they wish mob rule where a handful of people take to violence & demonstrations & oust people that they dislike completely ignoring the wishes of the rest of the populace. Dharshan Weerasekera proposes legal means to prevent such eventualities occurring in the future.

Protests have a fundamental right to protest. But protests and protestors have restrictions & their protests have to take place according to the law & they must follow rule of law.