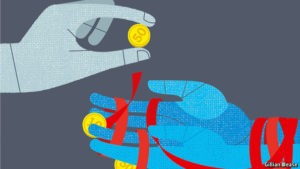 They call themselves ‘civil society’ but how representative are they? Note how connected they all are and how they continue to open new ‘social movements’ with sugar-coated objectives… most have been around for decades but what exactly have they done. Some of the popular entities are even accused of taking funds from multiple sources for the same task or claiming reimbursements for events not even held. But they do not shy from pointing fingers and projecting themselves as better than the politicians they want to oust. When these entities are really no better than the one’s they claim are corrupt – what really is the alternative for the people? With elections round the corner is it not possible that hidden hands and heads are pushing new movements to spread their wings with objective to marshal disgruntled voters with a hidden objective of transferring the people’s choice to the imperial choice eventually. It is quite obvious all of these have some form of international invisible backing and are being used simply to attract voters away from a nationalistic platform as it does not benefit the imperial agenda.

All of these players at some point or the other have come to the rescue of the imperial agent though to camouflage that their tactic is to say ‘Reject 225 + 1’ but then everyone who came to abolish the Presidency didn’t abolish it because they simply couldn’t. These are mere slogans used to fool the masses.

Members of the Lawyers Collective, from left, K.S. Ratnavale, Chrishantha Weliammuna and Jayampathi Wickramaratna leave after a press briefing in Colombo January 2013.

campaigned for 19a, promoted aluth parapura, thanked all those who strove to remove CJ Mohan Pieris – also featured on its FB is Nagahakanda Kodituwakku claiming that CJ Mohan Pieris must resign

The above charged President Rajapakse claiming the removal of Chief Justice Shirani Bandaranaike was illegal. Why did these same lawyers not hold a similar press briefing when Chief Justice Mohan Pieris was dismissed simply by not allowing him to enter his chambers? Shirani Bandaranayake was CJ 43 – but CJ 44 is both Mohan Pieris & Sri Pavan. How can this be? How biased has this Lawyers Collective been?

In December 2018, Lawyers for Democracy issued statement in response to Mahinda Rajapakse’s statement on dissolution of Parliament – signatories to this statement were K.S. Ratnavale, J.C. Weliamuna, Lakshan Dias, Sheath Nethsinhe. Why didn’t Lawyers for Democracy raise objection to the manner RanilW was appointed PM after a Presidential Election or the manner CJ Mohan Pieris was removed without due process being followed?

Lawyers for Democracy” in a statement issued in 2017, justified the appointment of Ramanathan Kannan as a High Court Judge inspite of the Judicial Services Association (which represents the district judges and magistrates of Sri Lanka) adopting 5 resolutions for his removal.

2013 article by Dharisha Bastians titled Rajapakse hiding behind monk-led mobs to attack civil society’ covering press briefing of Centre for Society & Religion because the supposed monk-led mobs had charged them of being funded by the US embassy to provide evidence to UN inquiry using LTTE families.

Led by Ven. Madulawe Sobitha thero to usher in what infamously became known as yahapalana or good governance. In November 2014 its first meet was attended by

University Teachers’ for a Just Society

on Tuesday, 2 December 2014 at Hyde Park, Colombo. The theme of the rally is ‘Escaping the Trap’

In January 2016 the Civil Society Collective

Port City was stopped immediately in January 2015 by Ranil and recommenced by Ranil in 2016 but no Sarath Iddamalgoda to protest against it!

April 2016 – Brito Fernando, President of the Families of the Disappeared says govt should not fish for Opposition MPs

Anyone who knows the outcome of the Woodstock festival would immediately realize where Red Woodstock of Love 2016 was heading of course heavily funded with $$$ all aiming to infuse foreign corrupt immoral cultures as western trends.

Colombo-based neoliberal think tank connected to the US Govt  https://www.advocata.org/about  & launched in May 2016 at the Lakshman Kadirgamar Institute & 3 months after the launch Minister Malik S quotes Advocata’s privatization plans.

Lirneasia – Rohan Samarajiva is its Chairman, Vinya Ariyaratne (General Secretary of Sarvodya is in Lirneasia Board), Vinya is also on the board of Sarvodaya Fusion – so too are Rohan Samarajiva, Madhu Rathnayaka (Virtusa),

In December 2018 Vinya formed National Peoples’ Movement (NPM) with Deshodaya (entity within Sarvodaya) and United Professionals Movement together with 17 civil society groups. Slogans being promoted in lieu of ‘yahapalana’ is ‘Together We Can’ and promising to ‘Save-Serve Sri Lanka’. These intellectuals believe a ‘new face’ in politics will save Sri Lanka!

Nagananda Kodituwakku’ Vinivida Foundation is also a partner of NPM. Nagananda is carrying out his presidential bid by collecting donations.

So what’s the link with United Professionals Movement (UPM) and United People’s Movement?

So what is the link with NPM and NAAF?

Incidentally, with JVP presenting its Presidential candidate as its party leader Anura Kumara Dissanayake – Abhiman Lanka invites JVP to join it – the alliances that were working in isolation are now closing ranks & joining! https://www.lankanewsweb.net/67-general-news/47670-’’Abhiman-Lanka’’-invites-JVP-to-join-alternative-force-amidst-presidential-polls–VIDEO-?utm_source=dlvr.it&utm_medium=facebook

Centre for Policy Alternatives headed by Pakiasothy Saravanamuttu has on its Board – Prof Jayadeva Uyangoda who is also on the Board of Law & Society Trust, Aritha Wickremasinghe appointed Director to board of National Intellectual Property Office by Ranil Wickremasinghe government.

CPA has been a promoter of ‘federalism’ in Sri Lanka and its head in 2016 was appointed, Secretary of the Task Force on Consultations on Mechanisms for Reconciliation – clearly establishing a link with the ruling RanilW government. Pakiasothy also was at one time a Transparency International Director.

In October 2014 an expose of funding corruption in the CPA was revealed.

CPA was accused of billing for un-held workshops, getting grants from 2 donors for the same task (EU & UNESCO paid CPA to do same task – each paying EURO 99,497.16), duplicating receipts, hotel bills and hoodwinking donors. These are the people preaching anti-corruption! The article claims CPA asked Galle Face Hotel to issue 4 bills for the same amount under different descriptions omitting alcohol intake. As per the article International Federation of Journalists is one of the ‘most corrupted media organizations in the world’ including double-billing. The entire article should be read – names of Rohan Edirisinghe, Sunanda Deshapriya, Victor Ivan are all mentioned. These are the entities and mouthpieces preaching about anti-corruption and good governance and holding workshops across the country promoting it!

In 2017 Coalition Against Corruption used Right to Information Act to demand information from Transparency International SL on its case against TISL Executive Director Asoka Obeysekera, report by J C Weliamuna, Rs.1.1m fraud, and providing job to a foreign female who did not have work visa. Fascinating how these so called civil-society paragons of virtue are all hiding skeletons in their closets but broadcasting to the world their virtues! Incidentally Weliamuna was elected to global anti-corruption Board in 2010!

In April 2015 Weliamuna said Failure to bring in 19A will be a complete reversal of people’s mandate” we all know what 19a has done to the country! The RanilW Government paid Weliamuna Rs.3.5m for a 136page report on Sri Lankan Airlines which the Airline rejected! Weliamuna also filed petition against dissolution of Parliament in October 2018 and reinstatement of Ranilas PM. Weliamuna is today Sri Lanka’s High Commissioner in Australia.

Top Donors in 2018: Norway Foreign Ministry, Asia Foundation, Soros’s Open Society, Swiss Embassy, DAI, Neelan Tiruchelvan Trust, John Keels (Integrity Idol) It is interesting to see the type of projects that these entities have funded Transparency Sri Lanka to roll out across Sri Lanka. Putting these programs on a larger platter will help understand their overall bigger objectives – something Sri Lanka’s policy makers and advisors are obviously clueless about!

Headed by Jehan Perera. Javid Yusuf is in Governing Council while also being a member of the present Constitutional Council.

Another point that needs to be clearly reiterated is that they cannot decide who people should and should not vote for. They cannot declare anyone a crook or not a crook. Democracy is such that the choice is in the hands of the voter. A crook in the eyes of ‘civil society’ may not be a crook in the eyes of a voter – it is their choice. But obviously, these civil society groups are adamant on who people should vote for and who shouldn’t – but is this really democracy?

With them claiming to forward new faces for elections – the next & most important question is who will they ask their supporters to vote as 2nd choice – this will give you a clue to what they are really up to!