Let us compare how the international community reacted to 2 incidents of riots targeting State buildings in US & Sri Lanka & the hypocrisy of those issuing statements in response to both incidents. Let us also compare how the world reacted to law enforcements clear the rioters in US and the manner they reacted to how law enforcements attempted to clear rioters in Sri Lanka after almost 2 weeks of illegal occupation. The hypocrisy is prevalent resulting in the sitting President Ranil Wickremasinghe pointing out to the US envoy why she or no other envoy uttered a word when his personal residence was burnt to the ground!

On 6th January 2021 groups of pro-Trump protestors forcibly entered Capitol Hill while Senators were inside refusing the accept election results. US troops had to be called in. 5 protestors died as a result and scores injured including US police.

This was how the world reacted to US rioters entering Capitol Hill. 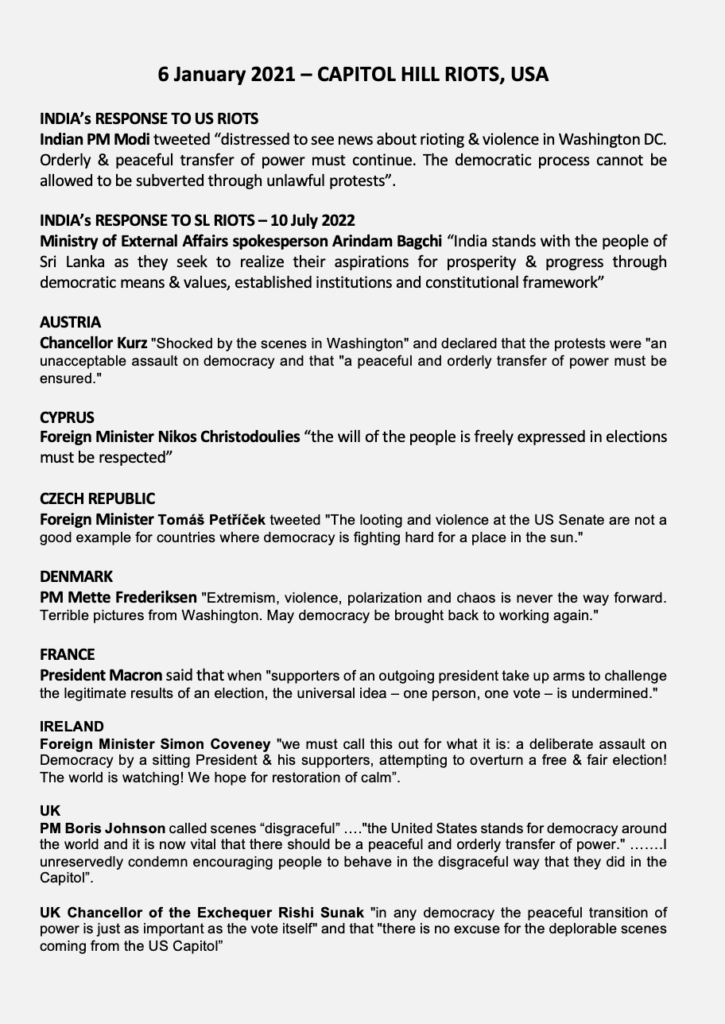 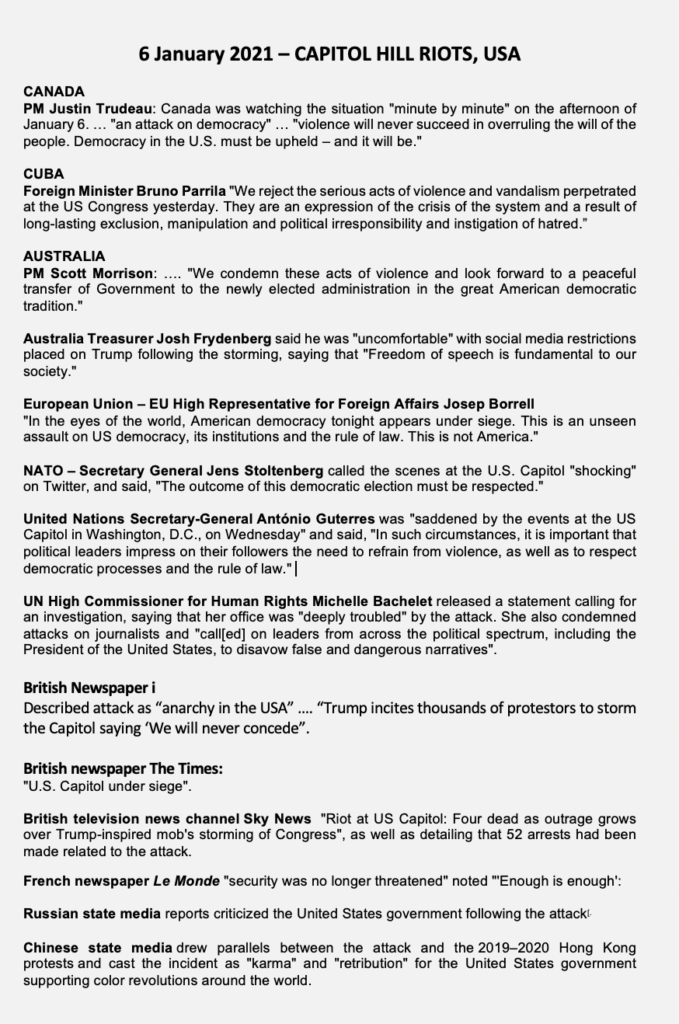 From the above statements what can be deduced is:

Pro-Trump rioters stormed Capitol Hill on 6th January 2021 at around 1p.m.  smashing windows, breaching barricades but Capitol Hill was cleared shortly before 6p.m. Curfew was imposed in Washington DC. Besides the Capitol Police the National Guard was also brought in as well as police from other states. Police officers were also injured as rioters clashed with the police.

What ensued on 6th January 2021 in US Capitol Hill comes nowhere near the devastation that took place on not just one state building but numerous – The President’s House, the Presidents Secretariat, The Prime Ministers official residence, the Prime Minister’s Office, 2 State TV stations were attacked, gates broken, barricades breached, scaling over walls, illegally occupying, destroying, damaging and stealing state belongings. The present President’s & former PM’s personal residence was burnt to the ground along with all of his personal belongings.

All those that lined up to condemn what is certainly minimal damage in US should have condoned the attacks of 9 July 2022 in Sri Lanka – but did they do so? If not, why are their responses different? 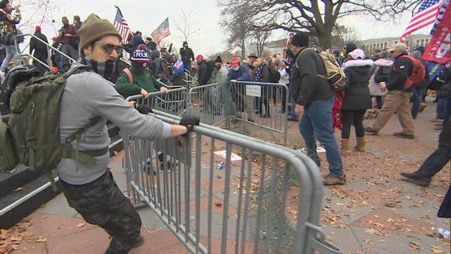 In July 2021 – 4 police officers related how they were beaten, taunted with racial insults, threatened “kill him with his own gun” and even thought they would die when they tried to defend Capitol Hill. This was no different than the brats of youth touch the uniforms of the soldiers & berate them. Was this part of the NGO training given to youth across Sri Lanka under the guise of ‘democratic inclusiveness”? 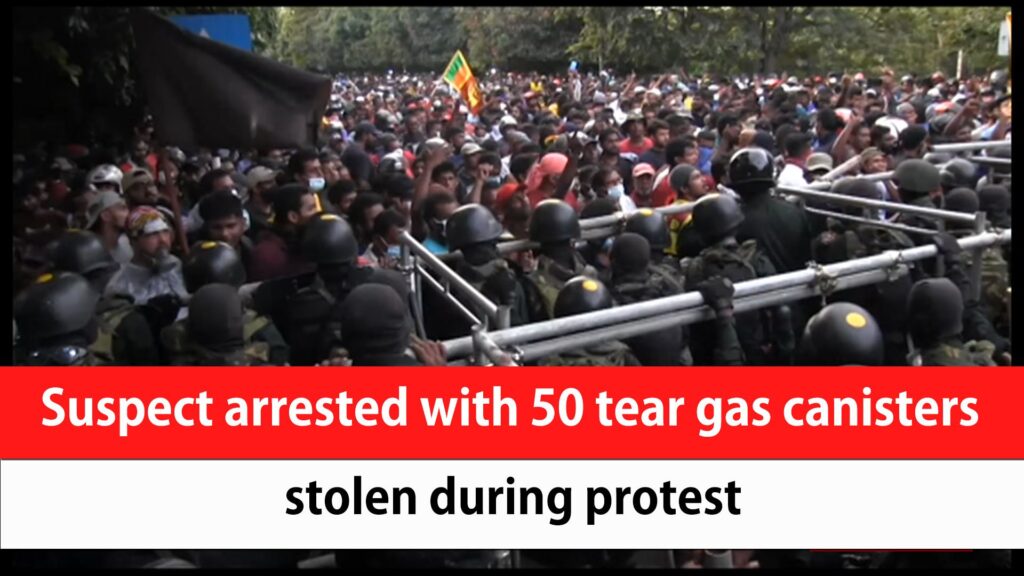 The US police officers called the rioters “terrorists” for “attempting coup” but what would have happened if Sri Lanka Police & Armed Forces did the same?

More than a 100 US Police officers and armed guards were injured and their stories are proudly relayed but what about Sri Lanka’s police & armed forces, some of whom still lie in hospital bruised after being attacked by mobs. One of the US policemen had even pleaded for mercy yelling he had kids – didn’t some of the police in Sri Lanka do the same? Were there anyone to relate their stories? Are they not human too?

However one thing was common – there were some people in both US & Sri Lanka trying to whitewash the mobs referring to the hooligans as martyrs.

https://www.cbc.ca/news/world/capitol-riot-hearings-prime-time-1.6483847 this footage shows rioters beating police in US – while these are condemned by all and quite rightly so, those that condemned attacks on US police have preferred to be numb on rioters attacking Sri Lanka Police & Armed Forces. We are baffled and wonder why?

When compared to the damage 4 state buildings were subject to in Sri Lanka while the personal residence of the PM was burnt to the ground, the attacks on Capitol Hill looked like nothing yet the US Capitol Police officer Caroline Edwards herself injured called the riot “carnage & chaos”.

On 6th January 2021 itself Capitol Hill was freed from rioters within 6 hours and everything returned to normal. Curfew was imposed and no one opposed. In Sri Lanka it is prominent political lawyers who openly opposed encouraging people to even defy the curfew.

The same did not happen in Sri Lanka when 4 state buildings became illegally occupied on 9th July 2022 and 2 state tv stations were also taken over. 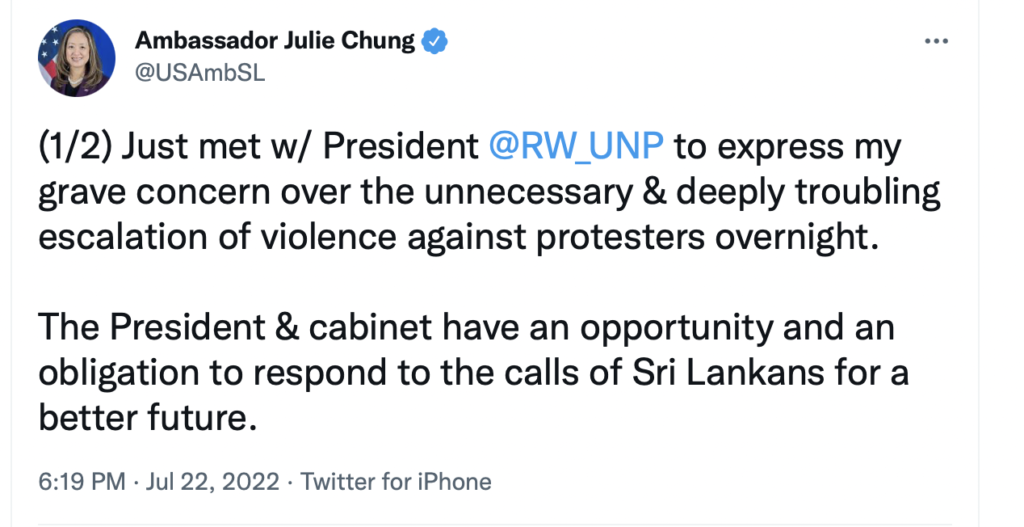 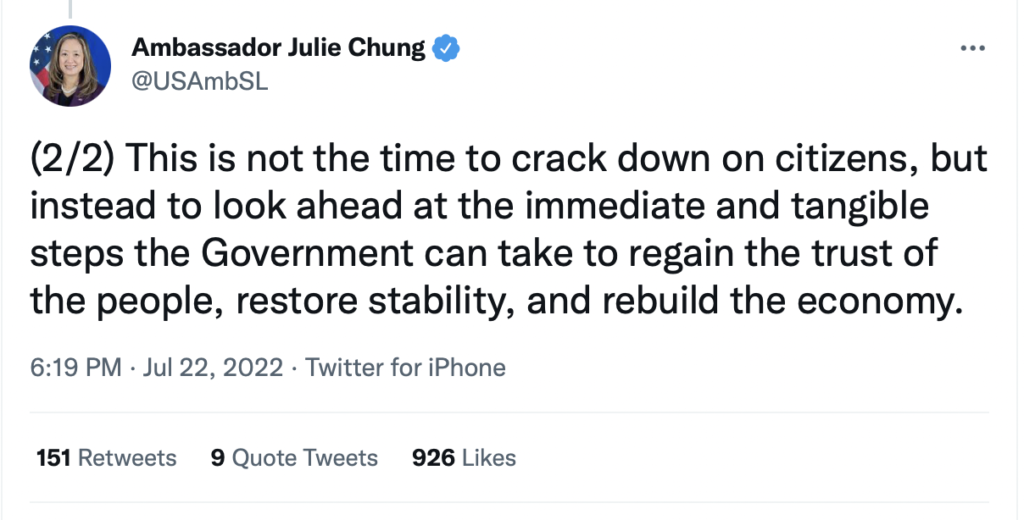 Actions by police was always pre-empted by diplomatic statements or arm-twisting threats and human rights charlatans appearing with their ‘freedom’ songs while the premier legal fraternity who was seen appearing free of charge for the rioters and clapping when they were given bail, while others joined a human change in Galle Face Green, were openly presenting the notion that rioters had every right to riot. This gave the rioters the freedom to do as they liked and a carte blanche to believe that whatever they did the lawyers would be at hand to provide legal services.

https://economynext.com/sri-lanka-bar-association-opposition-eu-slam-assault-on-protestors-uk-us-concerned-97783/ It was therefore no surprise that the Bar Association would join US, UK & EU to slam the GoSL and vilify the forces. It looked more like taking the opportunity to chastise the army & police under whatever excuse they could conjure up.

When images of the carnage slowly began emerging primarily from boasting selfies of the rioters themselves, the legal fraternity feeling embarrassed as their role was getting exposed, tried to denounce the acts of carnage  however the posts that covered their initial jubilation of the actions of the rioters are now being filtered as evidence of their aiding and abetting in the carnage. Given their profession, they are likely to get off scott free and the ignorant youth will no doubt end up the scape goats while the business community, revenge seekers, sports stars, artists and others aspiring to enter the political game would also slyly disassociate themselves in the days to come. These entities are the shields that the external lobbyists use to cover what took place in Sri Lanka on 9 July 2022.

While 5 were shot by US police not a single rioters died since 9 July 2022 however when Sri Lanka’s police & armed forces attempted to take back what was illegally being held tweets and calls from embassies flooded to prevent it. Doesn’t this seem strange that the very mouthpieces that denounced rioters in US would be encouraging rioters in Sri Lanka? The very mouthpieces that supported the US police & armed guards would be chastising the Sri Lankan police & armed forces. Would you know why they are reacting like this?

Sri Lanka has been too familiar with the manner that a drama is concocted to justify or vilify by the usual culprits – the narrative always has groups of journalists claiming ‘we are media, don’t hit us’ but they hardly cover the correct picture or do a very one-sided version or angle the story in such a way the truth is kept undisclosed and left for people to make their own warped versions.

While people storming the buildings, climbing over gates and walls, breaking gates and barricades is never denounced, security forces arriving to clear areas that have been blocking entry to Presidents Secretariat are given negative media coverage presenting the notion that the rioters were in the right & the armed forces were doing wrong to them. This was a complete misrepresentation of the facts.

Even the OHCHR statement claims “property belonging to the protestors, including tents, IT equipment & kitchen items were destroyed or confiscated”. What the OHCHR statement conveniently left out is that these were illegal structures on a public place not meant for only protestors – water, electricity used by them throughout the 100 days were not paid for nor have they got permission from the municipality to be located on the venue. Where have you heard of protestors taking over a public area by force and keeping it for 100 days? If such is allowed any group of people can claim to be protesting and put up tents and refuse to move from any public site. Can such be allowed? Protests should be allowed – but these cannot be 24x7x365 days and beyond and entail temporary fixtures becoming permanent ones. Surely, UN must be aware of this? Would protestors be allowed to do the same in UN or any other country’s public venue. It took just 6 hours to disburse the rioters in US who had also created an autonomous area. When this site was broken down did OHCHR also write a statement similar to the one issued against Sri Lanka? If not, why this hypocrisy? https://www.ohchr.org/en/statements/2022/07/comment-un-human-rights-office-spokesperson-jeremy-laurence-raid-sri-lanka?fbclid=IwAR0R48H5GZQ1PekthJvokPZt9ey0Oy50BzLqQXXCAGOLnHPbhX0rEEubh9E Read the hypocrisy behind the statement issued to Sri Lanka but not to US!