Let the Supreme Court sentencing of Dr. I K Mahanama & Piyadasa Dissanayake be a lesson to all corrupt Public Servants 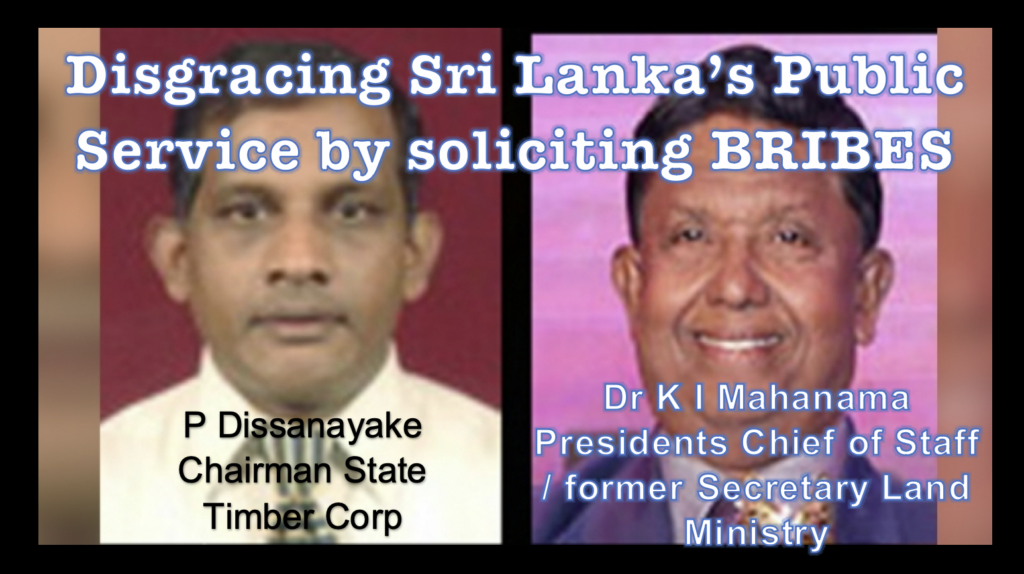 For the buck to stop – some severe action needs to be taken to set an example & nullify the assumption that corruption is a way of life & accepted. The scale of corruption within the Public Sector has often gone unnoticed as attention has been diverted to & fixated on politicians. However, the public sector apparatus appear to be more corrupt & it is time that action is taken to catch these corrupt Secretaries, Officials first before going after the peon. While corruption is corruption & no act is large or small. What often happens is that the small man gets penalized while the major corruptions and the mafia behind these corruptions always get away. This cannot happen. It is time to go after the big sharks first. The sentencing of Dr. I K Mahanama & Piyadasa stalwarts of former President Sirisena should send clear messages to the corrupt Public Sector in Sri Lanka.

On 9 May 2018 the Bribery Commission arrested President Sirisena’s Chief of Staff Dr. I. H. K Mahanama & State Timber Corporation Chairman P. Dissanayake over a Rs.20million bribe for the transfer of land, handover of buildings & steel owned by the Kantale Sugar factory. Mahanama had initially solicited $3million from the Indian investor. It later reduced to Rs.100m. Rs.20million was the advance of the Rs.100m total bribe.

The initial bribe asked from the Indian investor was Rs.54million (how did it reduce to Rs.20m)

The bribe was related to the acquiring of the state-owned sugar factory. They were arrested while soliciting the bribe at the carpark of a hotel in Colombo.

Mahanama had also served as former Secretary of the Land Ministry (2015-2018). It is pertinent to see the scale of corruptions that he would have been involved in while Secretary especially in relation to land. On what criteria was he promoted from Secretary Land Ministry to the President’s Chief of Staff (July 2018 to 3 May 2018)?

Dr. Kusumdasa Mahanama was sentenced to 20 years rigorous imprisonment & a fine of just Rs.65,000 & ordered to re-pay the state Rs.20m he solicited as a bribe.

The counsel for both sought lenient sentences claiming their age – but they were old enough to solicit bribes! What an embarrassment to their children & families. Moreover, the damage done to the country vis a vis the lack of confidence in genuine investors who have to pay a bribe to invest in Sri Lanka!

President Sirisena appointed Anuruddha Polgampola as Chairman State Timber Corporation following arrest of P Dissanayake who was the previous Chairman. However, Polgampola was also arrested on 15 May 2018 by the CID for financial fraud of Rs.8m connected to the construction of the Northern Railway line. Polgampola is a former SLFP MP.

The Court declared that officers such as Mahanama & Dissanayake had embarrassed the public service & their conduct deteriorated the service. The Court pointed out that people who are appointed to high positions in the public service should be blameless & honest, corrupt-free officials who set an example to those working under them.

That the officials tasked to arrest the corrupt were able to do their job without political interference, that the Courts also upheld their role in giving justice against corruption & that inspite of appeal the Courts upheld the decision of a lower court shows that we have a system in place & the system can catch & sentence the corrupt.

We know too well the rampant corruptions taking place increasingly in the public sector as well as those who enter the public sector as advisors, consultants, Chairmans etc. The noose must come down on all of them scaring the other lower rung public servants who think they are a law unto themselves. While the lower public officials think they can come to work whatever time they like, leave whatever time they like, utilize work time to gossip, abuse office phones, stationary etc at a higher level there are public servants who are divulging state information, loopholes in the system for favors and remunerations & these must be netted in first. These are more dangerous than the one’s gossiping at work or stealing stationary.

The Govt needs to revisit the Kantale Sugar Factory deal & the viability of the transaction & legalities as well. It should return to the state if no proper procedures had been followed by the then Govt, its officials as well as even the investor.