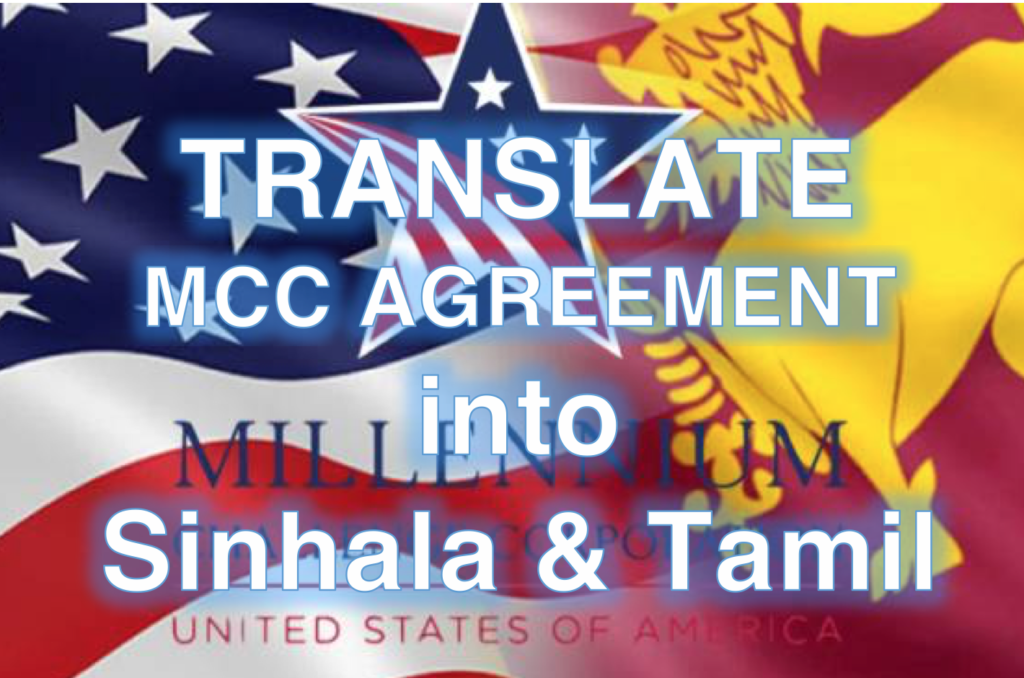 When the Cabinet spokesmen continuously makes controversial statements and does not apologize for the mistake, it is natural for citizens to be anxious given that most Governments have not only fooled the public, but have made enough and more decisions that have proven detrimental to the sovereignty of Sri Lanka and has burdened the tax payer as a result of shady deals ventured into in secret. The MCC Agreement was first made public after much public outcry by the previous government who even omitted 2 vital pages that was later inserted and found in the website of the Finance Ministry.  There are varying commentaries made on the MCC and much of that is due to the fact that neither the MCC nor the previous government saw fit to translate the Agreement so that the citizens of this country who speak Sinhalese and Tamil could read and understand it. However, it is the onus of any government to make available a document as serious as that of the MCC in the medium that the people of Sri Lanka are conversant with. Even of the handful of English speaking and English understanding people in Sri Lanka only 2% have probably read the Agreement & understood the dangerous contents in it. However, it is the right of the citizens to know what their elected Government is signing claiming to be for their good. Therefore, the Government must immediately get the Government translator to translate the MCC Agreement into Sinhala and Tamil. The Government has given the Cabinet a further 2 weeks to study the MCC Agreement & provide their comments. How many in the Cabinet are able to read, understand English and make their observations or reservations in English? When the Constitution itself clearly says where there is any doubt the Sinhala translation will prevail, it is imperative that the MCC Agreement is translated into Sinhala & Tamil.

The US Embassy website does have the MCC Agreement link and note how it has been saved (MCC Agreement with the consent of the Attorney General) Incidentally, the present Chief Justice was the AG the document is referring to
http://treasury.gov.lk/article/-/article-viewer-portlet/render/view/mcc-agreement-drafted-with-the-consent-of-ag

If the US embassy can get the factsheets & brief summaries translated into Sinhala & Tamil, why didn’t they translate & publish the MCC Agreement too?

Be that as it may – none of these factsheets or briefs come anywhere near to what the contents of the Agreement holds in English format and it is essential that the ENTIRE MCC AGREEMENT is TRANSLATED INTO SINHALA & TAMIL for all the citizens to read, debate and make their observations and reservations public. This is what open discussion and democracy is all about.

Simply presenting a version in English and expecting 99% of the country to whom English is foreign to understand and accept it is totally unacceptable.

In fact, when the Gunaruwan Committee presented its report in the majority language, those who ran to demand the English translation of it remained silent about demanding the MCC Agreement to be in Sinhala & Tamil. Why?

Is there a reason why the MCC Agreement is being kept only in English?

Is the translation in Sinhala & Tamil versions not being presented because the public in reading the Sinhala or Tamil versions will realize the dangers in particular the Maha Sangha?

The present Government that assured the voters during the run-up to the Presidential election that no strategic assets of the country would be sold or no detrimental agreements would be signed must now undo the damage done by the previous government and take the interests of the country & its citizens first above pleasing any foreign party that had ventured into an agreement in secret.

Therefore the onus is on the present Government to immediately task the Government Translator to translate the MCC Agreement and all associated documents (Constraints Analysis etc) into Sinhala & Tamil and have it made available in electronic & print format for the citizens to read and understand and make their observations.