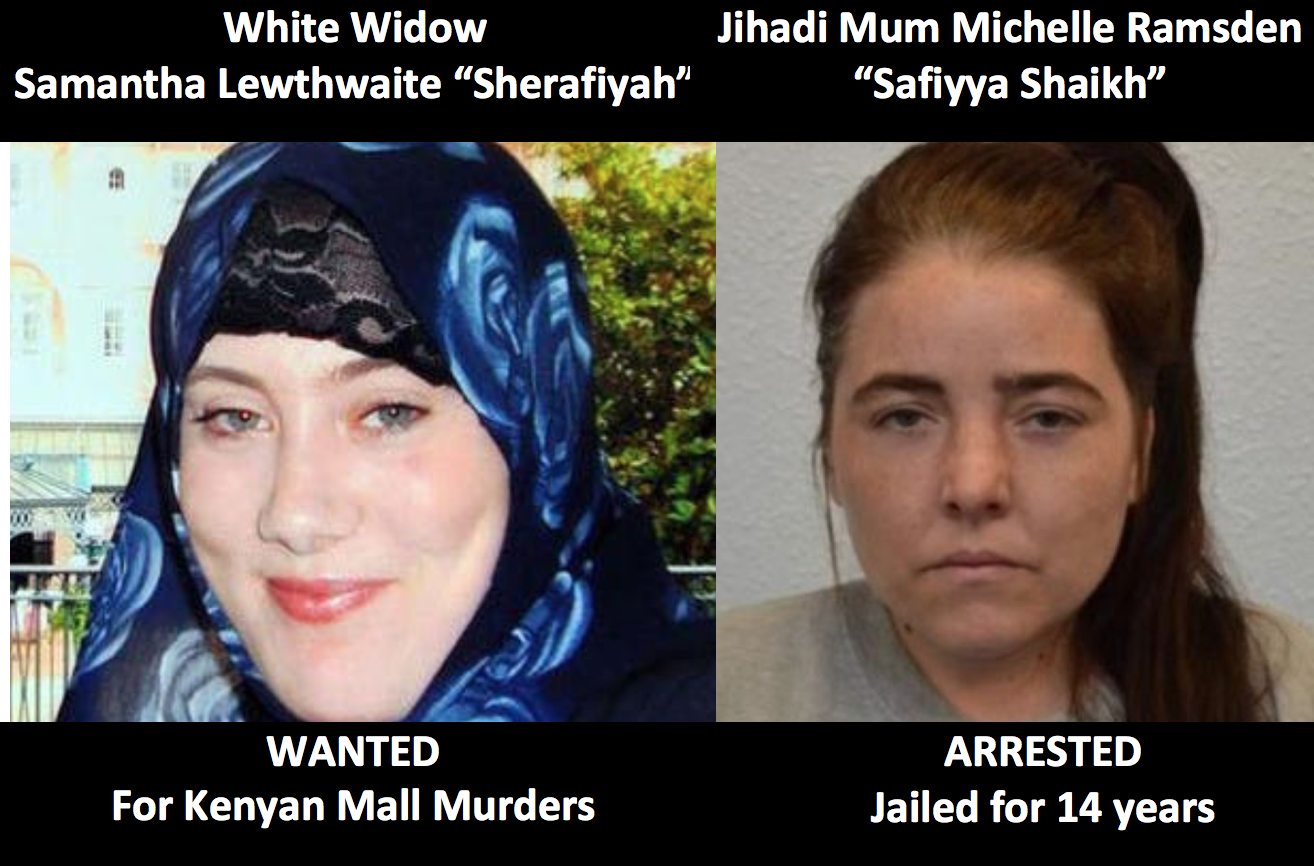 UK banned LTTE in 2001 but continues to turn a blind eye to LTTE fronts openly campaigning for LTTE and separatism. No amount of diplomacy or goodwill can change that. UK has also been sympathetic to Islamic extremism. There is little point in appealing to the UK Govt or authorities to realize the dangers. The best response was to simply wait until UK eventually learnt its lesson. Unfortunately, innocents have died as a result. UK and all other governments treating terrorists as pet poodles must wake up to the reality that these killers eventually bites the hand that rocked its cradle.

Michelle Ramsden 36 years of Hounslow, West London converted to Islam at the age of 24 and changed her name to Safiyya Shaikh. She planned to copy Sri Lanka’s Easter Sunday jihadi suicide bombers by attacking St. Pauls Cathedral. Just like Sri Lanka’s suicide bombers – her objective was to kill kafirs or non-believers and gain access to heaven. Her journey of radicalization started from 2007 following extremist preachers on Facebook. She even tells undercover officers that she would love to take the head off a kafir. It was as a result of undercover officers that the Britisher was prevented from killing innocent people. https://www.bbc.com/news/uk-53264640

On 21 April 2019, 9 Islamic suicide bombers killed close to 300 innocent people targeting hotels and churches across Sri Lanka. One of the suicide bombers Abdul Lathief Jameel Mohamed studied aerospace engineering at Kingston University between 2006 and 2007. He had also studied for a post-graduate degree in Australia.

In 2016, Minister Wijayadasa Rajapakse revealed some 32 Muslim family members had gone for ISIS training to Syria. An uncanny feature was that they were all from rich and educated families completely negating the notion that poverty inspired terrorism.

If we go a little further back to 2013 we can recall Samantha Lewthwaite, the Kenyan Mall Killer.

Part of the problem is to glorify terrorists and boast about being a terrorist. Adele Balasingham, Beate Arnestad and Niromi de Zoysa glorify terrorism & public killings and turn female terrorists into martyrs and in so doing people like Samantha Lewthwaite and now Michelle Ramsden emerge. Samantha Lewthwaite gunned down over 100 innocent people. Samantha converted to Sunni Islam when she was 17 and adopted the name Sherafiyah. Samantha became the ‘white widow’ and member of Al Qaeda affiliate Al-Shabab. Her husband Germain Lindsay blew himself up in a London underground train causing UK’s 7/7 that killed 52 people. Lewthwaite was eight months pregnant at the time with their second child, a daughter.Samantha is also wanted in connection with plotting attacks on hotels and restaurants in 2011. She is a wanted criminal but is being protected by a suicide squad of elite fighters

Aunty Adele the white nurse pioneered and trained female LTTE terrorists and turned children into child soldiers and instructed them to commit suicide biting a cyanide capsule. She has even written books boasting about her life in LTTE.

Niromi de Soysa claims to be a former child soldier and proceeds of her book was to go to her alma mater which was St. Joseph’s College, Jaffna. Niromi being female could not have attended an only boys school! She is exposed elsewhere too.

Since Commander Richard Smith, head of counter-terrorism at UK’s Scotland Yard understands the danger, we hope that the UK takes greater measures to deal with jihadi elements linked to Sri Lanka and the UK LTTE fronts hob-nobbing with UK politicians like they were long lost friends!

Foreign governments and their intelligence agencies as well as counter-terrorism units must first ask whether the lives of ordinary people are more important than providing safe haven to terrorists and using them as a covert/overt operation to put pressure on foreign governments. Ultimately Rajiv Gandhi had to pay the price with his life. LTTE assassinated him in his own country/India while campaigning.

Another aspect that even Sri Lankan authorities should not dilly-dally with is the reality that mushrooming Shariah madrassas proven to be breeding grounds for hate speech and hatred bordering brainwashing to kill infidels cannot be allowed and must be nipped in the bud. The arrest of a prominent lawyer connected to Sri Lanka’s Easter Sunday mass murder and his association with a madrassa that was training children to kill and use fire arms is a case in point. The discovery of a Arabic/Islamic Law College immediately questions what the modus operandi of setting up such a school is all about when the public echo the need to have ONE LAW in ONE COUNTRY for ALL. Anyone wishing to have this strict component of religious dogma are more than welcome to resettle in countries where only this law, this Shariah life and associated culture is practiced. But feigning ‘multicultural’ mask no one should be entitled to subtly change the ethos of the country by hiding behind the cloak of ‘minority discrimination’ and using that as a façade to create a parallel culturel, law & society in Sri Lanka and this is an issue that even people in the West are angry about and find fault with their governments for appeasement policy that has weakened the country and made the citizens vulnerable to extremist attacks. 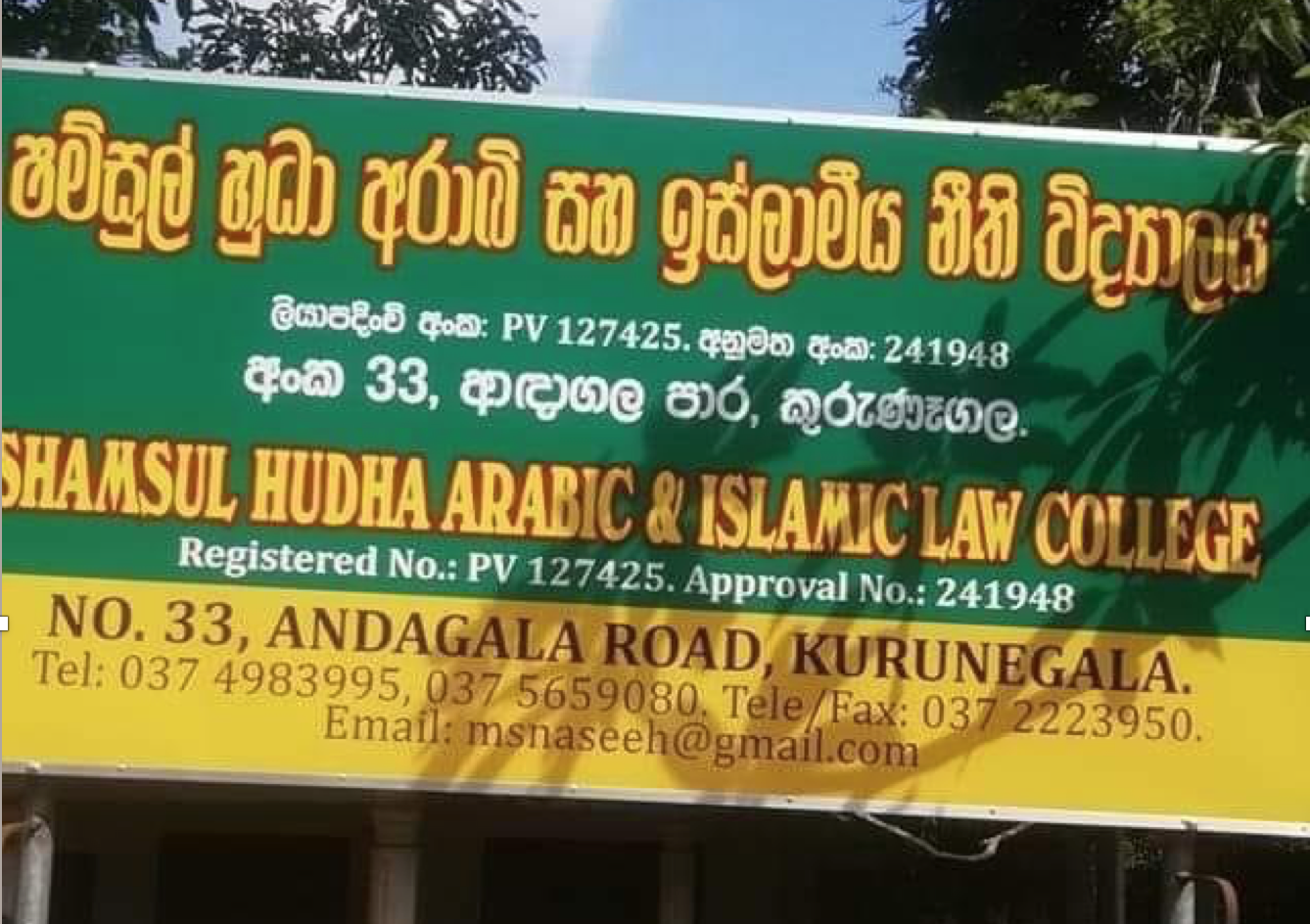