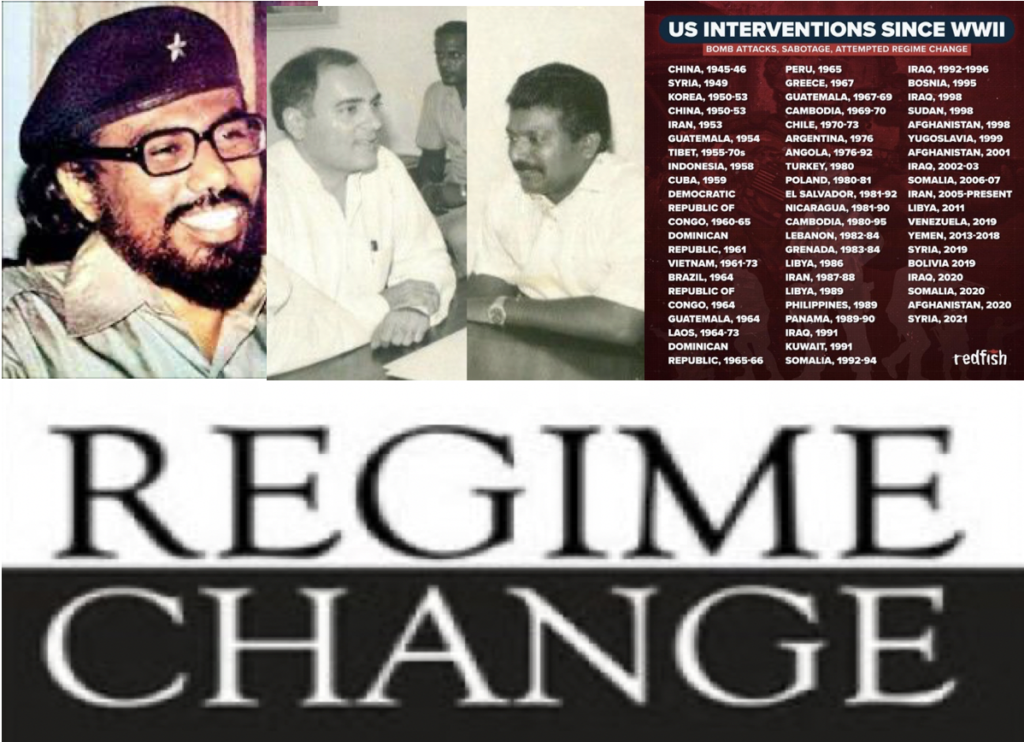 Sri Lanka gained partial independence in 1948 since the Queen/King remained Head of State and the highest court was the UK Privy Council. This meant that from 1948 to 1972 UK continued to have the final say in all of Sri Lanka’s affairs. Sri Lanka became truly independent only on 22 May 1972 and rightly Sri Lanka should be celebrating Republic Day & not a partial independence.  However, from 1972 to present, Sri Lanka has witnessed too many internal conflicts, majority of which have been orchestrated externally through clandestine operations to ensure Sri Lanka never raises its head. The interventions that Sri Lanka cannot ignore comes from India-UK-EU-UN/UNHRC & now US. All of these entities have different fronts operating within Sri Lanka – hired political parties/politicians, NGOs, the Church, jihadists, locals induced to betray the nation. While these externally induced factors impede development, internal factors include corruptions (public & private) & other nuances like lethargy, lack of consistent national policies, yo-yo political culture etc. It is as a result of periodically dispatching these destabilizing elements that Sri Lanka can never develop.

The outcome of both JVP insurrections & the response by the then governments in power was that the victims on either side were Sinhalese. Was this the subtle gameplan in funding both sides & choreographing to cut short the lives of talented Sinhala undergraduates, Sinhalese businessmen, academics, artists, armed force & police? This aspect of the raw deal has never been looked into. Behind the façade of ‘insurrection’ was the real aim to eliminate Sinhalese & weaken them? The answer comes in the manner present day JVP fronts influence undergraduates inside universities to further take their lives into decline.

Tamil militancy began with India training Tamil youth to commence a guerilla warfare against the State. LTTE emerged the gruesome party & eliminated promising & talented Tamil leaders. LTTE was also used to deny education to thousands of Tamil youth by turning them into child soldiers & killers. Had these children not engaged in warfare what would they have been today? While India initially supported Tamil militancy, through the years foreign governments, international agencies & the Church aligned with it to advance their own historical & geopolitical agendas.

If Sinhalese are targets of JVP, Tamils are targets of LTTE & Jihadism targets Muslims – we should be mature enough to understand that these external elements are breaking us apart as a nation by putting communities against each other. This is the same blueprint of divide & rule followed by our invaders.

India remains a key player in its manner to dictate how Sri Lanka is run. Using Tamil militancy India self-appointed itself as the surrogate mother of Tamils & continues to bully Sri Lanka in all of its decisions in North & East. India uses Estate Tamils & its political groups to dictate how Central Province Tamils should be treated. India’s trade pacts further influence Sri Lanka in virtually every sector – food, oil, culture, infrastructure & even politics. Now India is boldly venturing into forcing Sri Lanka to sign military pacts aligned to the US objective of using ACSA, SOFA & MCC to permanently place US troop presence in Sri Lanka on pretext of protecting its people & equipment. India is advancing its initiatives in Sri Lanka realizing US cannot be trusted on account of its program to balkanize India eventually.  Every country has permanent interests above all which is something Sri Lanka’s politicians and advisors fail to understand.

India dictates how Tamils vote. West/NGOs/Church dictate how Christians/Catholics vote, global political allegiance decides who JVP should support every election & how the ground campaign is steered. US helped UNP elections in 1956, 1960, 1965, 2000, 2015 elections. Incidentally, it is questionable why US didn’t help 2005 election unless India & US thought it was time to eliminate the ground force of LTTE together with its leader & pass baton to the LTTE diaspora.

China has never interfered or invaded any country and China’s investments has always been with economic profit in a win-win deal though it is not China’s fault that Sri Lanka has no capable negotiators to strike beneficial deals in favor of Sri Lanka. We can recall how the Mahinda Rajapakse government was defeated simply because it allowed Chinese submarines to dock at our port.

UK was the last colonial invader to occupy Sri Lanka for over 150 years & continues to think it has a right to dictate the affairs of Sri Lanka.

Amidst these governmental incursions & interferences, the West’s other front UN/UNHRC /Church are busy arm twisting Sri Lanka to change its internal systems so they can be controlled and dictated by UN & Western Governments thus breaking down the sovereign status of Sri Lanka.

With LTTE ground force no more the LTTE diaspora is used as pawns. The JVP armed force replaces its political wing often used as foot soldiers by every government who turn to external help to come to power and compromising their promises to their voters & having to pay back to these external forces for helping come to power.

So invariably both LTTE & JVP had elements of foreign involvement & these became used as soft power tools to arm twist successive governments. These entities continue to be used under different facades.

Leaving aside the external elements manipulating politics & how the country functions, our own house is certainly not in order. Corruptions, commissions, cronyism, bribery, favoritism have not helped any of Sri Lanka’s illustrious programs to consistently develop. National policies plans & initiatives are subject to paper. This is prevalent not only in public sector but in private sector as well. The gap between the rich & poor is widening to showcase the level of corruptions that prevail. The salaries & perks of the top CEOs and Management in Sri Lanka showcases another element of how the corporate world is able to influence advantage to themselves via government deals inked abusing the corruptions that prevail.

One cannot take a wand and simply make all these ills disappear. Firstly, the citizens of Sri Lanka must be aware that any developmental goals we may aspire to achieve & political parties promise to their voters is made impossible by the external elements whose main goal is to keep Sri Lanka unstable by using a plethora of players for their objective – these range from political parties, politicians, media, lawyers, local organizations, trade unions, joint ventures with private individuals/companies etc… all of these players are used knowingly or unknowingly to advance a bigger agenda. Each of them are tasked a role, which when fitted together, the jigsaw of destroying Sri Lanka comes on track. This is what we need to understand as the truth behind the political landscape in Sri Lanka.

How do we change this?

We need a leader who understands the real picture, who has a team who also understand the real picture & who want to carve out a plan with strategies to overcome and counter the googlys that are thrown at us from different fronts. This team cannot compromise or be manipulated by internal or external sources & they remain committed to bringing Sri Lanka to where it deserves to be.

Do we have such a leader & team amongst us? Let us search….