The hands of the SL Human Rights Commission, foreign funded NGOs/HR activists are all tainted in blood of Easter Day victims

On 21st April 2019 Islamic suicide bombers struck at 8 venues instantly killing some 250 plus people and injuring over 800 some of whom have succumbed to their wounds. Some 36 foreigners have also perished. Foreigners or locals – innocent people were targeted and the tragedy is that intel reports were received since 4th April 2019 giving even the targeted venues. So the question is not whose fault it was but to realize that intel sent went into incompetent hands of people who were not suited for their roles and lacked knowledge in how to handle the situation because the competent people were either made to retire, were given minor roles or transferred elsewhere. The replaced were people who did not know how to handle a calamity. Given the political set up & environment, the security apparatus knew that those in power were simply enjoying power with no patriotism so everyone was just doing a daily job & going home. How did an administrative system that inspired itself to defeat the most ruthless terrorist group end up this docile? The answers lie with the bandwagon of players who carried out a vilification campaign against the Armed Forces post May 2009 and demonized & demoralized them.

When Sri Lankan troops defeated the murderous LTTE & held the dead body of its ruthless leader & showed the world that LTTE ground force was well and truly defeated in May 2009, people hit the streets, holding the national flag, lighting crackers, distributing kiribath – there was jubilation all round and people of all parties joined in with virtually all vehicles flying the national flag. That jubilation was chopped by the so-called international community via the UN Secretary General demanding to stop the ‘triumphalism’ inspite of US, UK & Allies still celebrating defeat of Nazi Germany – Victory Day since 1945 annually in grand scale. Such was the jealousy & hypocrisy of the world who hated to admit that Sri Lankan Forces was the ONLY NATIONAL ARMY to defeat a terrorist movement.

The bandwagon of individuals and groups that collaborated against the armed forces post May 2009 were the very same linked to the separatists indirectly & directly. There is nothing ‘non-governmental’ in NGOs – most are funded by foreign governments & on their payroll. Most are part of the LTTE’s own human rights linked club. Others belong to the historical trouble makers that land in every country pretending to be the ‘rights activists’ but all the while trying to implement some foreign geopolitical agenda.

Immediately after LTTE defeat came the ‘allegations’ of 40000 dead which inflated itself to even 200,000 though none of those making the allegations or counting the dead has produced names or details of the dead. If even the basic name or skeleton is not presented as evidence how can an army be charged of killing people?

Thereafter came the Ban Ki Moon report that was a personal report which was never tabled in the UNHRC, UNGA or UNSC but became the basis of 3 successive UNHRC Resolutions all of which are controversial & legally questionable and sought to demand as recommendations changing of the country’s constitution, repealing terrorism act and internal matters which by UN Charter was an interference into the internal affairs of Sri Lanka.

Totally forgotten was that Sri Lanka’s armed forces were called upon to defeat no one but terrorists and in terms of civilian deaths the Sri Lankan official statistics given corroborated with that of the UN Country Team statistics and was less than 10,000. Totally forgotten was the close to 300,000 Tamils the soldiers saved along with 12,000 surrendered LTTE combatants who fought in civilian clothing.

But the bandwagon of locals none of whom have a semblance of patriotism except doing anything for dollars and pounds led the ugly onslaught to name and shame Sri Lanka’s army. Most were heavily funded by LTTE diaspora as seen by the events organized by them to which these individuals were regular attendees. They all went to town to hold our army & intel services accountable in word only – no proof or evidence but because the unpatriotic press gave them space and columns their lies were promoted. The armed forces were demonized, degraded and the credit due to them were denied. Political pressures were such that even the Victory Day celebrations were forced to be renamed.

The well-funded efforts to show our war heroes as war criminals was next taken to the international arena. With foreign media, foreign envoys, UN & UNHRC all taking lead roles. Some who held plum posts went to Geneva to play to the LTTE gallery and paint the Sri Lankan Army as war criminals.

From the Sri Lankan Human Rights Commission head to the NGO circle heads and many others, the same forces that were too chicken to come out & condemn any of the LTTE atrocities are now talking as if they are the God’s gift to human rights & righteousness.

The links are clearly obvious. All that the LTTE diaspora elements & destabilizing agents demand are the very same that these HR & NGO activists are now attempting to delivery on their behalf as the regime change assisted by the foreign forces have cleverly placed them in prominent & powerful roles.

The resolutions were all flagrant violations of the UN Charter interfering in the internal affairs of Sri Lanka and called for the repealing of the Prevention of Terrorism Act and even a new constitution. Not surprisingly, all those that sided with LTTE through the years were promoters of this.

They were all promoters of the Office of Missing Persons Act, Enforced Disappearance Act – both of which would facilitate false evidence against war heroes and subject them to foreign judicial jurisdiction when the US soldiers in all of its illegal invasions are omitted of investigation as was recently seen in ICC withdrawing case against US troops.

The SLHRC head is also a promoter of repealing the PTA and in favor of the new Counter Terror Act that not only dilutes the powers vested in the PTA but is more of a political witch hunt to charge opposition on frivolous charges including media. Freedom of speech & expression would be greatly curtailed and many are of the view that an increasing unpopular government would benefit by passing a CTA to gag the opposition.

The SLHRC head is suddenly vested powers to whet military personnel nominated for peace keeping missions overseas and she is withholding nominations claiming them to have allegations of war crimes. When no one making blatant charges has produced names of the dead or even skeletons of the dead – how can any military personnel be charged with war crimes? Even the basic requirement of ‘proving guilt beyond doubt’ is missing. However, the paid media is used lavishly both in Sri Lanka & overseas to paid Sri Lanka’s Army as demons and devils.

Here are a few examples of a government bowing down to the bandwagon of vultures attempting to project Sri Lanka’s Forces as war criminals and painting the LTTE as squeaky clean completely ignoring the 30 years of terrorism LTTE inflicted on all and the brutalities LTTE committed not only against surrendered or captured military personnel but upon unarmed civilians too.

Throwing a war hero to the wolves to appease Tamil separatists; the real story behind the ‘Mirisuvil massacre’ needs to come out

LTTE is banned in UK. LTTE diaspora carries LTTE emblems and flags but nothing is done against them and their events are not even stopped inspite of massive cut outs of Prabakaran however, Brigadier Priyanka Fernando, inspite of holding diplomatic immunity issued warrant by UK police & later charges dropped. Power of LTTE diaspora lobby in UK seen.

Former Navy Spokesperson D. K. P. Dassanayake, who played a pivotal role in defeat of LTTE is arrested in July 2017 and denied bail. Eventually bail granted in January 2018 yet no charges filed.

Field Marshal Fonseka, in September, alleged that he had been denied a visa to attend the UNGA in 2017

When Maj. Gen. Shavendra Fernando was appointed the Chief of Staff, this is how foreign media reacted “alleged war criminal named second-in-command of Sri Lanka army”

There are 2 intelligence officers on death row on questionable evidence. The secret nature of intelligence services is such that their identities and their scope of work are required to be classified and top secret but we know what happened when their names and details were released following the Millennium City debacle under this same government in 2002 resulting in 58 intelligence officers killed by LTTE. Many of the intel officers are now probably in hiding knowing the treacheries of this government in exposing their real identities and their work.

Former Senior DIG Anura Senanayake, was arrested and remanded in May 2016 and granted bail only in June 2017. He was not even allowed to attend his daughter’s convocation.

Daya Ratnayake former Army Commander and a key figure in the Eastern theatre of the war, Major Gen. (Rtd) Udaya Perera  – the Director Operations of the Army  during the war, questioned by the Presidential Commission of Inquiry into Serious Acts of Fraud and Corruption

While war heroes were getting arrested not only were LTTE combatants in prison getting released the Parliament even passes compensation for LTTE terrorists – another first!

Naturally, since 2015 when the decorated officers of the Armed Forces were ashamed in front of the nation, brought to questioning like common thieves and treated dismally even by the paid press who cared not to question why forces heads are being arrested without evidence and simply kept in prison without bail.

Most of these arrests almost always took place just before a UN official landed, or Geneva sessions were held or a Western/Indian envoy landed in Sri Lanka – it was as if this was what they were expecting and the government was waiting in anticipation for pat of the back to say ‘good show’.

This treatment of decorated war heroes, most of whom were not given extensions and made to retire had virtual puppets placed in their roles, people easy to manipulate and people who were willing to tow the appeasing line…Is it a surprise that when intel with such detail was sent with venues and names of the assassins, nothing is done to at least increase security at these venues and inform the hotel heads and church heads about the threat?

For demonizing the war heroes, making them think that patriotism is not the norm, giving them the message that they just needed to do their daily job & return home was enough to keep the entire system off guard more so because the appeasing government exposed internal systems not only to the enemies but even the enemy agents in politics linked to the LTTE diaspora were privy to confidential information. 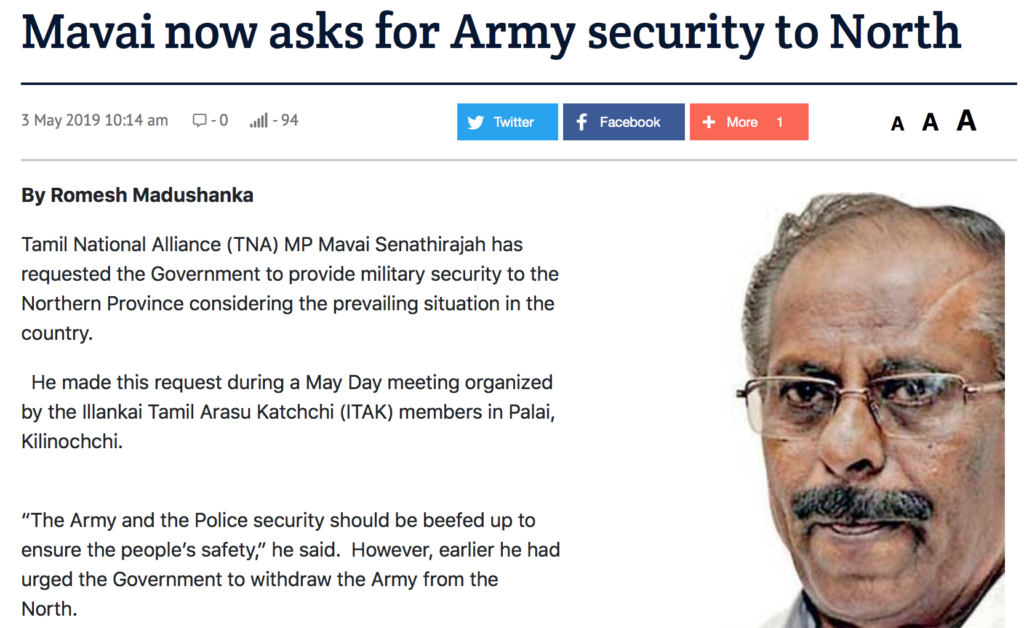 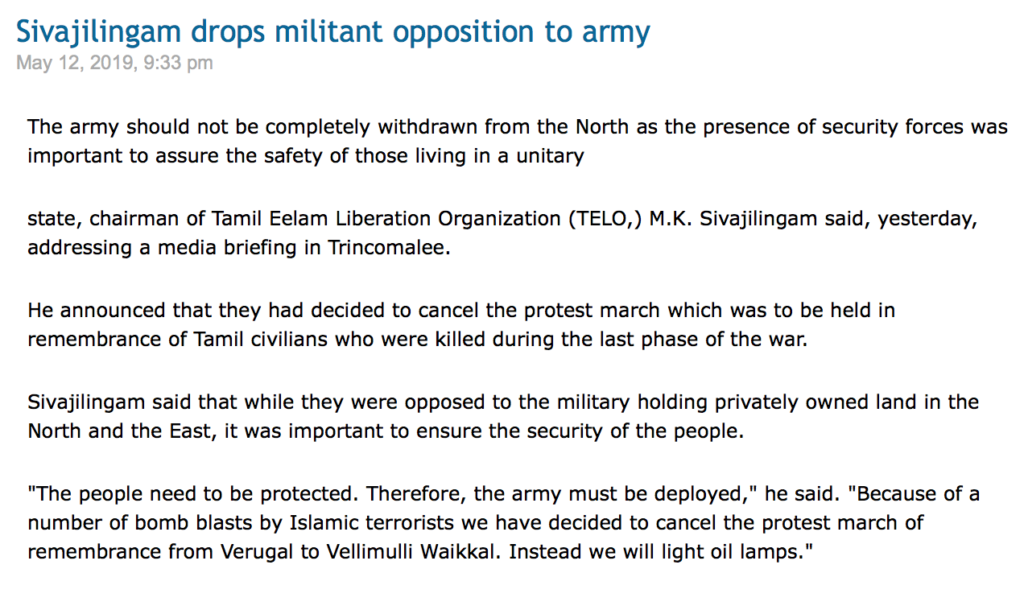 Therefore, every HR, NGO activists including media that towed the separatist line and demonized and demoralize our war heroes have BLOOD ON THEIR HANDS of close to 300 people & hundreds of others who are injured & thousands of others who have got affected by these 9 suicide bombers. The hypocrisy is such that from the PM to even the TNA leaders and Sivajilingam, Mavai Senathiraja & Ananthi Sasitharan who were jumping up & down calling for the removal of the Armed Forces are now appealing to the government to increase the army in the North while the politicians are also seeking additional security for themselves by the very persons they were not shy to call war criminals. Probably, the NGO heads and others are also using the very army they demonized for their security too.

Such hypocrites we have – goes to show no education can make a person humane and compassionate and traitors would do anything for money.