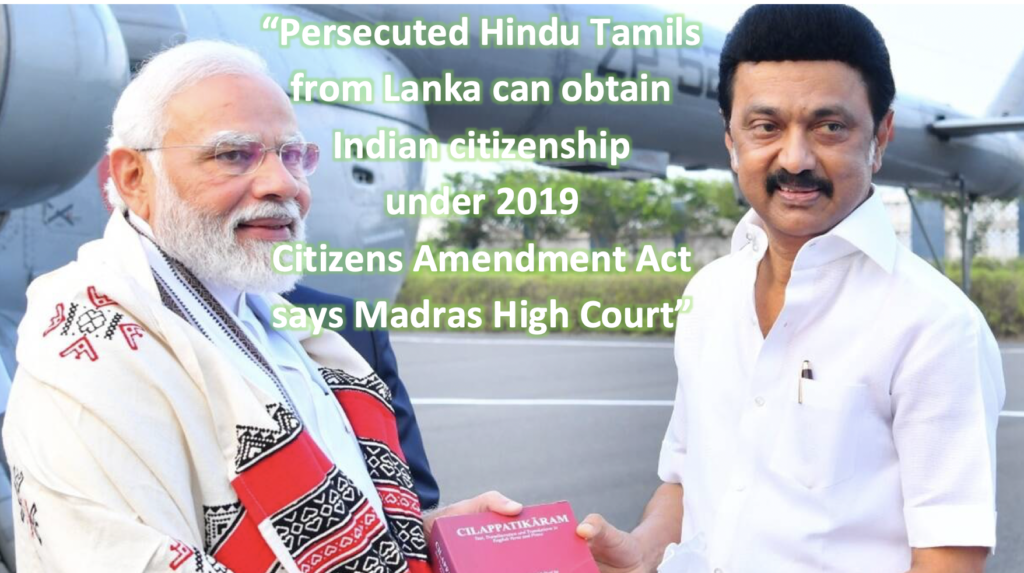 “Persecuted Hindu Tamils from Lanka can obtain Indian citizenship under 2019 Citizens Amendment Act says Madras High Court” was an interesting news headline. It came a day after TNA’s Sridaran went crying to South Indian film idol turn politician Kamal Hassan to complain about Sri Lanka. Ironically, the CAA was passed after a petition by a Sri Lankan who had applied for Indian citizenship claiming victimization in Sri Lanka, though she had been born & educated in India (as such she was not a Sri Lankan citizen & she did not require to renounce her citizenship).

The key words of the headline are “Persecuted” “Hindu Tamils”. This obviously leads us to question who amongst Tamils claims they are persecuted?

The TNA entire leadership / C V Wigneswaran / remnants of the LTTE & supporters of other former militant groups. If these and possibly some civilians claim they are persecuted. They do not need to hold demonstrations or protests, or sign petitions to the UNHRC or go crying to western foreign missions. All they need to do is renounce their Sri Lankan citizenship and obtain Indian citizenship. This however does not mean that in lieu of the numbers leaving Sri Lanka, that Tamil Nadu Tamils who claim they are persecuted in Tamil Nadu can gain citizenship or illegally make residence in Sri Lanka.

So Sambanthan, Wigneswaran, Sridaran, Ponnambalam and all unfortunately without Sumanthiran can obtain Indian citizenship. Sumanthiran cannot because he is not a Tamil Hindu. Perhaps the Madras Court should also include a clause regarding pseudo Hindus who are Born Again but pretend to be Hindu as camouflage.

Some questions arising from this news

India has provided a solution to Tamils claiming to be persecuted in Sri Lanka – they can renounce their Sri Lankan citizenship & become Indian citizens.

Now all Tamils have an option & anyone who hates Sri Lanka or the Sinhalese are welcome to become an Indian Citizen instead of a Sri Lankan Citizen.

This means no longer does LTTE Diaspora need to raise funds to promote a mythical homeland, India (Tamil Nadu) is calling all Hindu Tamils from Sri Lanka back home to where they belong. All those who abhor Sri Lanka and the Sinhalese and do not wish to live in an inclusive society or nation, should immediately proceed to take up this offer.

As we have repeatedly said, there are no exclusive mono-ethno-linguistic or religious areas in Sri Lanka. No community has a right to claim any area as they own and debar others from setting foot. Every citizen by constitution is entitled to live and work where they like. The thesawalamai foreign customary law not only is discriminatory of other Tamils and should be regarded as a foreign law that applies not to all Tamils but only a segment of Tamils and that too who are inhabitants from another country. How fair is this on the Tamils. These are areas that are discriminatory of Tamils but no one goes pointing these facts to the UNHRC or foreign envoys!

Be that as it may, the Madras High Court decision is a welcome one. If anyone hates to live in Sri Lanka, their next option is India, which claims to be so interested in the welfare of their brothers and sisters as pointed out countless times by Indian Prime Ministers. Let us hold them to their word.