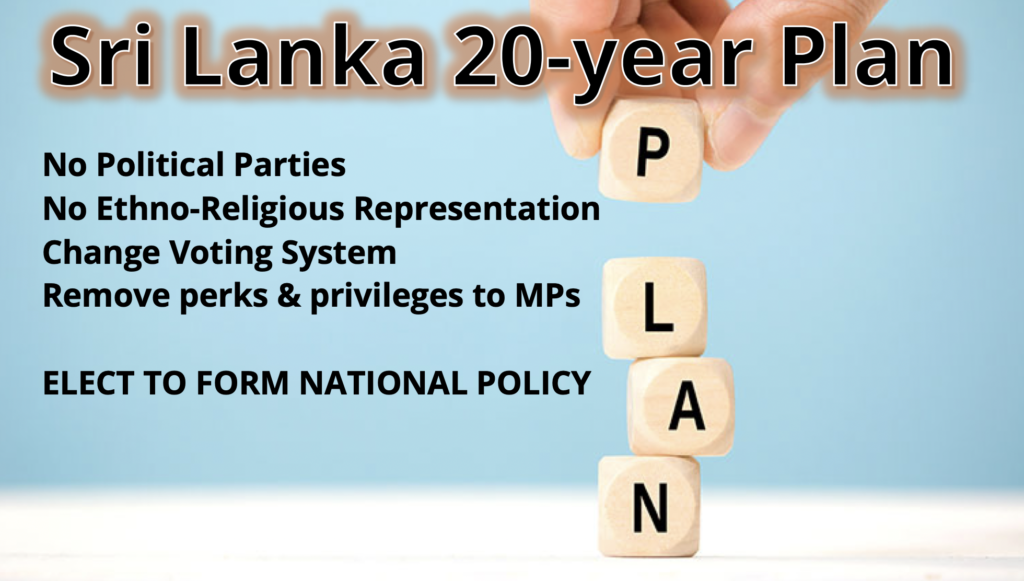 In 44 years of the executive constitution, Sri Lanka has seen nothing but political debacles. It is when we reach a stage of chaos that inspires us to think of ways to change and adopt new systems with the consent of the people. Therefore, people’s consensus is important. Nothing should be decided by foreign governments, foreign funded local NGOs – only the people of Sri Lanka.

We have a multi-party system in Sri Lanka.

There are 79 registered political parties in Sri Lanka.

12 political parties are dedicated to Tamil & Eelam (by name)

All these parties denote an exclusive reference to only one ethnic-community & is counter-productive to any national plans for unity.

Since 1978 we have seen a plethora of cross-overs, all for selfish political gain or to cover up corruptions and serving no purpose to the people who voted for them. The reducing of entry from 12.5% to 5% further eroded governance by enabling small timers to enter Parliament with hardly any votes & end up kingmakers during crucial times. These ugly practices has only increased and turned Parliament into an auction house – with MPs being virtually “bribed’ and “bought’ over to join the ruling party or cross over to the Opposition – all to make the necessary numbers.

This is not healthy democracy & is one of the main reasons for the collapse of good governance that is expected from the people’s representatives.

The 2 main political parties are United National Party & the Sri Lanka Freedom Party while the new comer Sri Lanka Podujana Perumuna that contested for the first time in 2020 is now in power. There is not much ideological differences currently in any of the parties as most are swaying away from nationalistic policies that were a hallmark of parties prior to 1977. When political parties and their representatives sway to neo-imperial policies – it removes their nationalistic duties & they soon become pawns of international & private lobbies. Therefore, other than their registered party names – all of these parties do not follow their promises made to the people when they begin governing the country. In such a scenario, do we need a bogus multi-party system of 79 or more parties wasting paper during elections?

Can we consider having a no-party system for an interim period of 20 years until Sri Lanka can properly get on its feet sans political googlys and political auctioning. A set of people contesting elections wanting to draft national policy – who do not require money or funding to contest.

We need to have a team of patriotic individuals prepare a national policy plan for 20 years that has policies and programs to secure Sri Lanka’s food security / energy security / political security / defense security / economic security etc.

These national plans must be broken down to workable goals & given to local bodies / private sector & individuals including children & graduates to achieve & must become part of their respective duties to the nation on a daily basis & monitored by a national team appointed specifically for this task.

The constitution can be kept on hold & a simple document prepared to be valid throughout the 20 year period that covers law & order / penal code rules regulations & punitive measures / instructions to the judiciary & legal framework taking stock of all of the loopholes and maladies that currently exist and addressing these. A team of former judges should be co-opted for this task (ensuring they are not compromised to foreign parties)

A new voting system for a no-party system

We currently have 9 provinces and 25 districts. The present preferential voting system is a proven failure. The people’s choice is always selecting the lesser evil from the bandwagon of people selected by a political party in their nomination list. Campaign funding and money for campaigning denies good people wanting to serve the nation from contesting & getting selected. Others end up pawning themselves to individuals and businesses to help fund their campaign & payback in bigger doses is demanded after winning. The circle of corruption should be now understood by all.

Election Commission accepts nominations for every district (no dual citizens & nomination paper must include affidavit by candidate assuring they are not dual citizens) The eligible names are numbered & made available to public before elections.

Interim period of development plan will remove all perks & privileges currently enjoyed by MPs & the remuneration will be revised which will automatically demotivate the corrupt from attempting to enter.

Given that the 43MPs are to be formulating national policies for the 20 year period – the qualifications & expected criteria needs to be formulated.

Elections can be held in respective municipalities/local government offices over a period of a week so it saves unnecessary costs. Election staff will have to be stationed in these sites with police & systems to ensure no vote rigging/fraud or intimidation takes place. 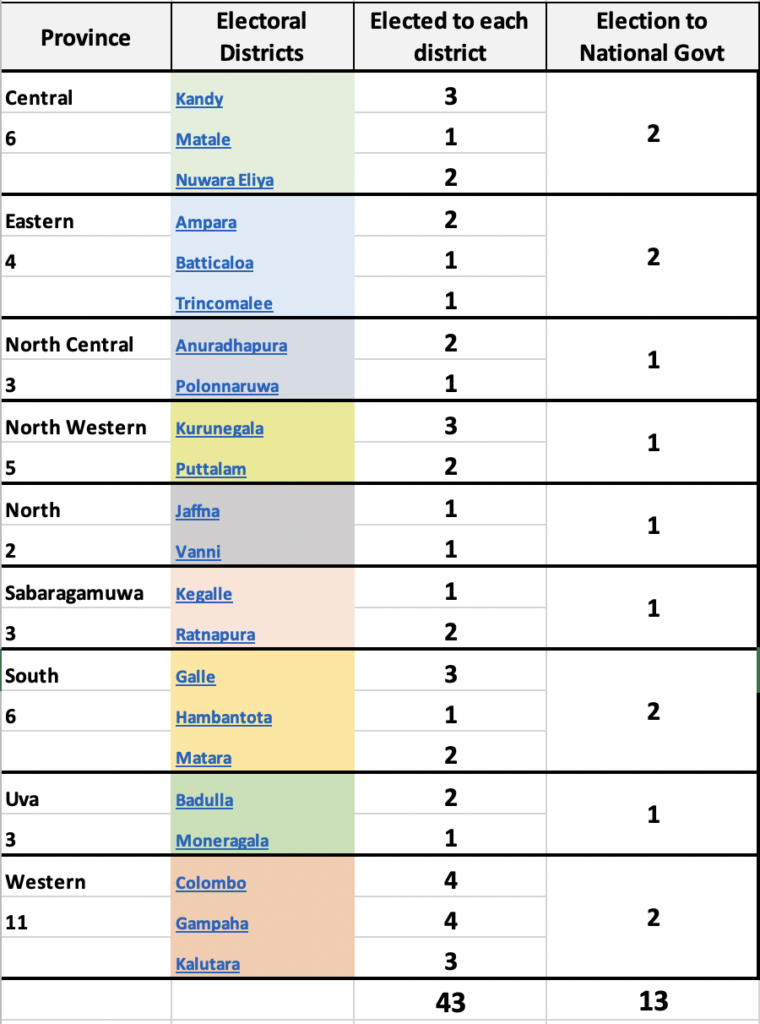 The President will be elected separately.

This 43 MPs who are voted on first-past-the-post system will be formulating policy as per key ministries & 13 persons from this 43 MPs will serve as Cabinet members to make the final decision along with the elected executive President.

The basic objective is to come up with a workable policy plan that would look at immediate-short term-mid-term-long term goals and initiatives.

The National policy formulation team of MPs must also invite private sector and general public for their proposals & suggestions as well.

People are voting not based on political parties but individuals.

Individuals send their applications to the Election Commission.

For 20 years Sri Lanka departs from political party system as this has been a key catalyst for catastrophe in Sri Lanka.