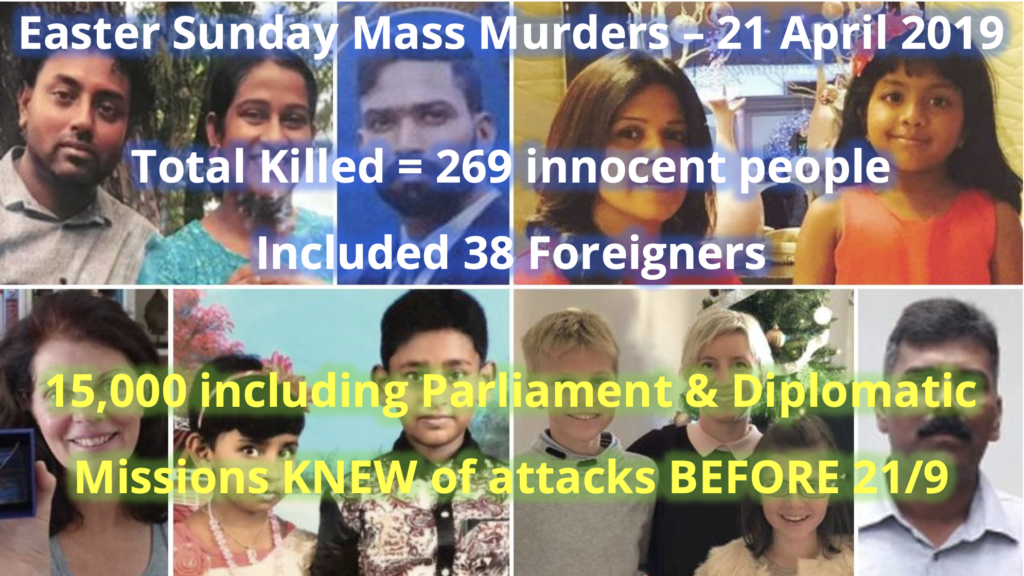 In October 2020 the former head of State Intelligence Service Senior DIG Nilantha Jayawardena told the Presidential Commission of Inquiry that nearly 15,000 people were aware of the Easter Sunday attacks 10 days BEFORE THE ATTACKS (11 April 2019) & this included diplomatic missions & Parliament. What a shocking number. Does this include the Church hierarchy as well? It certainly did include Catholic Minister of the then ruling government HarinF. What is the legal position for anyone knowing about an impending crime & not doing anything about it while making noise now to cover up their guilty conscience? Has the members of the Church hierarchy been questioned if they too knew? Is this why they were not present at the Church on Easter Sunday & not a single Church father died.

38 foreigners are among the dead – including British, Indian, Danish, Dutch, Swiss, Spanish, US, Australian and Turkish nationals.

The 15000 who knew about a likely attack by religious extremists included Diplomatic Missions & Parliament – are they all not accountable for these dead?

8000 officers in the Western Province. Over 5000 in the STF. Diplomatic Missions were aware of it by 20thApril. Entire Parliament had to have known as their security were informed but the ‘decision makers of this country say they were not privy to this information”.

Former SIS Head Nilantha says he will take responsibility for events until 7 April 2019 only.

It has been convenient for all in the know to pass the buck to the SIS Head claiming they did not know – when they did.

While many attempts are being made to single out officers who were made aware of impending attacks, these officers had in fact made the information known to the people who had to give the orders for prevention of such an attack. That orders were not given, when the one’s who had powers to give orders knew of an impending attacks, makes them far more guilty than the officers who knew of it.

To this list of people in the know is a former Minister whose father had been briefed by one of the 15,000 in the know & who advised his son HarinF not to attend church. Is it not unusual that none of the 225 MPs in Parliament who were Catholic attended Mass nor did their families? They have committed a constitutional failure in not fulfilling their duties Article 42 (1) (2) (3)

The President was Maithripala Sirisena

Minister of Law & Order in charge of Police was Sagala Ratnayake – a close confidante of the PM.

Dr. Muhamad Zufyan Muhamad Zafras was the one who helped Zaharan’s brother Rilwan get treatment for his injury in Colombo after experimenting in Sainamarathu. AG has been instructed to institute criminal action against Dr. Zafras under S.5 of PTA for withholding information.

– working at the National Hospital, Colombo who has helped Zaharan’s brother Rilwan to get admitted to Colombo National Hospital for treatment as a person injured in a gas cylinder blast, hiding the fact that he was injured in a blast while experimenting with explosives. The COI has recommended the AG to consider instituting criminal action against Dr. Zafras under S. 5 of the PTA for withholding information.

Are the one’s in the know, now trying to put wool over our eyes and try their best to cover up their guilt by pointing fingers and crying ‘political conspiracy’ to blame others & hide their own guilt.