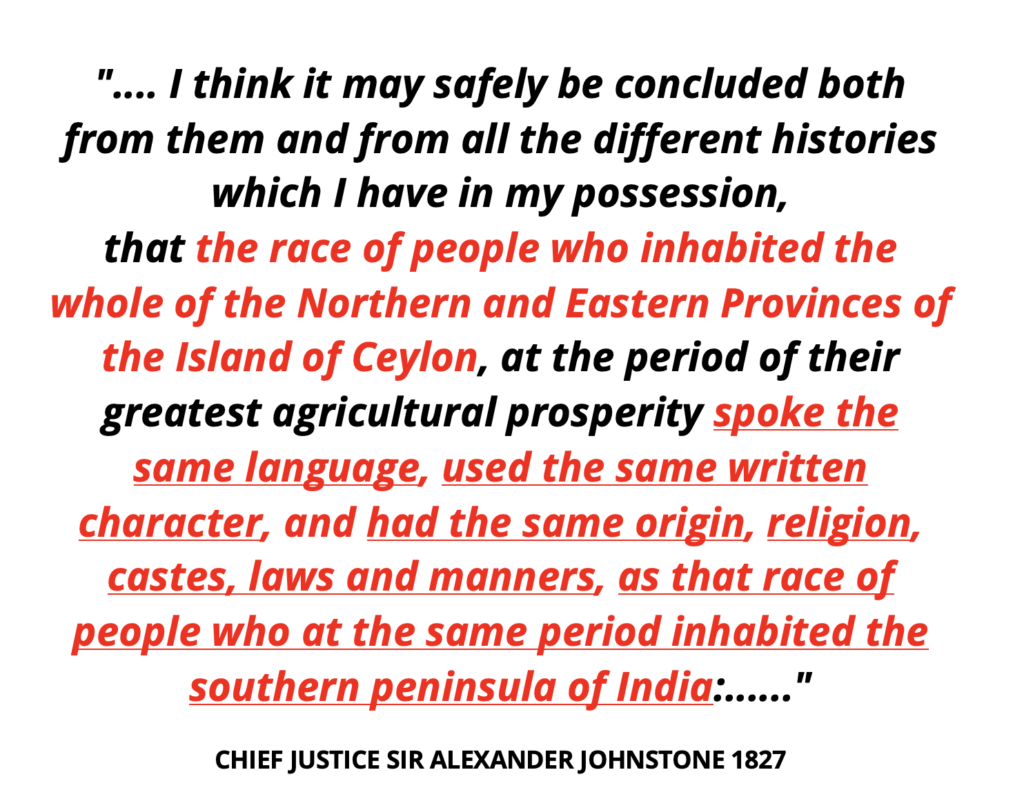 In 1992 a paper was presented by a Working Group of the International Federation of Tamils in London. This paper cites a quote from the British Colonial Secretary in June 1799 to the UK Government while Robert Brownrigg the Governor of Ceylon refered to Tamil as Malabar Language. Clearly both ethnicity & language of Tamils were identified as Malabars who belonged to South India. 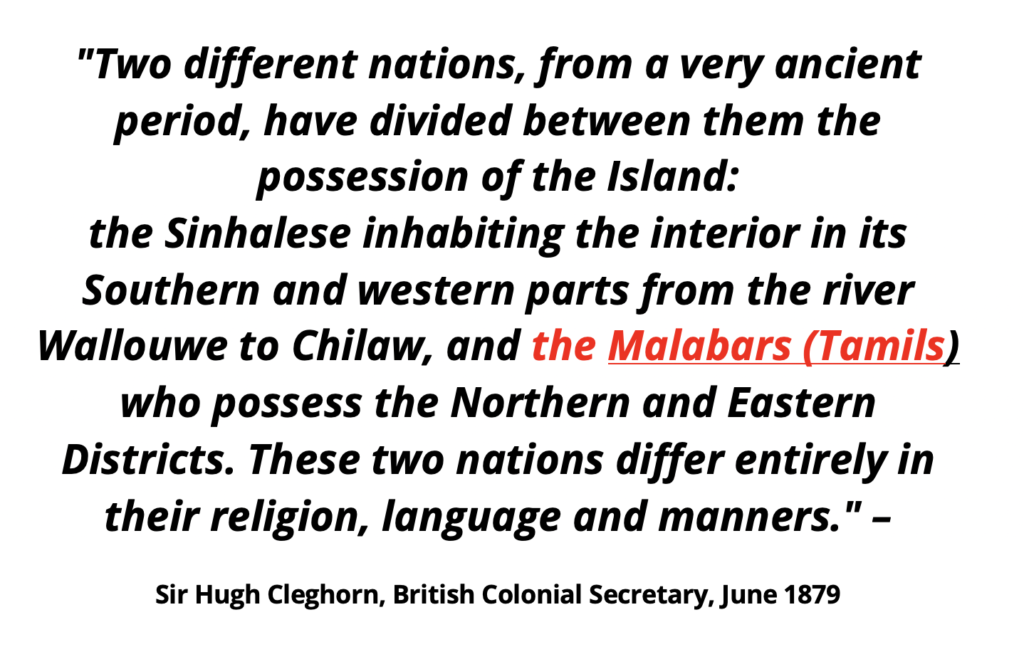 When the Portuguese arrived in then Ceylon there was no Tamil independent nation, therefore for close to 500 years the so-called Tamil kingdom had no independent Tamil nation. Plucking bits & pieces from history & demanding a separate state is ludicrous and will only create ugly precedents for others to make similar silly claims. Those professing to divide Sri Lanka must wake up to reality. Countries can no longer live in isolation where people of one ethnic group is segregated to move with only their ethnic group & speak only their language. The handful that actually want to do so should go & start set up a village as a model & see if they can survive a week without interaction with any other race, any other language, any other culture etc.

The usage of the term MALABAR has not been given due attention.

This answers and negates the self-determination quest.

MALABARS do not find their origins in Sri Lanka

MALABARS are by ethnicity & language from South India.

South Indian Malabars cannot claim self-determination in Sri Lanka. They should do so in South India.

We have not paid enough attention to this key word – MALABAR as this was the term used for “Tamils” by all 3 colonial invaders and they used MALABAR to refer to Tamils that came from South India. Nowhere was there any reference to CeyloN Tamils, as this term was coined in 1911 only. Prior to 1911, no such people called Ceylon Tamils existed.

Tamils seeking self-determination & separation have previously used the quote by Hugh Cleghorn however, it is being ignored now primarily because people have been smart enough to ask “WHO ARE THE MALABARS”

What more is there to say.

Tamilnation.org proudly claims that the “Cleghorn Minute of 1799 and the Arrow Smith Map of 1802 are official proof that the Island of Ceylon consisted of two separate countries”

How can this be – when both refer to MALABARS and both confirm MALABARS are from India!

Viscount Torrington arrived in Colombo in May 1847 he increased taxes resulting in mass protests. To quell the protests he brought Malabar troops from Madras. He was known as the British hyena resulting in being recalled from Ceylon. None of these Malabar troops returned to India.

The 1818 rebellion was also quelled using Malabar Tamils brought in from India. They too didn’t return to India either.

This proves colonial British were transporting MALABAR (TAMILS) from Indian coast to Sri Lanka & settling them with explicit intent to change the demography of Sri Lanka.

This is MALABAR COLONIZATION of Sri Lanka.

This also shows that Malabars initially imported from India to Jaffna were to be sent to East to colonize the East.

“SETTLEMENTS” indicate the British were not bringing one or two Indians but entire villages to create artificial Malabar “inhabitatnts”.

The colonial British COLONIZED THE NORTH & EAST with MALABAR (Tamils) these are the descendants now claiming a bogus “homeland”.

Does the TNA ever claim an exact period of independent rule? How can they claim so, if Sinhalese had been living in the North before them? Can the TNA list names of Tamil rulers who are not Indian?

He also admits that the population of Jaffna from the earliest times was one of Sinhala speaking people. This changed as a result of South Indian invasions.

Dr. Karthiegesu Indrapala in his doctoral thesis writes that Tamil settlements existed only after the 13thcentury.

Prof. K M de Silva in his book “Myth of the Tamil Homelands” says even between 10th & 15th century AD Sinhales settlements were strong in the North – “In the early days when Buddhism flourished in North Ceylon, the outlaying islands off the coast of Jaffna contained important monasteries and viharas”.

WHen the Western colonial invaders arrived with the Portuguese in 1505, historian Father Queroyz in his book “The Conquest of Ceylon” wrote

“On the arrival of the Portuguese that Jaffna was one of the fifteen sub-kingdoms under the King of Kotte  who was therefore, known as the Emperor of Ceylon”.

When Portuguese attacked Jaffna, the Sinhala King sent his troops headed by Mudaliyar Atapattu because Jaffna was part of the Kandyan Kingdom  Queroyz states that Jaffnapatana

“remained under the Portugezen sway for upwards of 40 years, wrested from the Emperor by Philippo d’Olivero when he defeated the Cingalezen forces near Achiavelli (Achuvely) by the great pagoda”.

If when the Portuguese arrived, there was no separate independent Tamil kingdom, how can the Tamil separarists make self-determination claims!

That Buddhist temples, monasteries and ancient remains existed in the North even as far back as the 2ndcentury BC is revealed in the report to UNESCO by UNP MP Cyril Mathew.

What happened to the Sinhalese Buddhists living in North Sri Lanka?

All 3 colonial invaders imported Malabars from South India & colonized them in Sri Lanka. Malabars Tamils were the only Tamils who were living in Sri Lanka, it was only in 1911 that a group called Ceylon Tamils emerged.

The 3 colonial rulers colonized Sri Lanka using Malabar Tamils by enacting wasteland laws making Kandyan peasants landless. If at all anyone should be asking land back, it is the Kandyan peasants who lost their lands as a result of invader illegal laws.

Malabar colonization by the 3 western invaders resulted in close to 1million Indian non-citizens imported to Sri Lanka. These Indians were residing on Temporary Resident Permits. They were regarded separate to the Ceylon Tamils term coined in 1911. How this was separated using what criteria has never been properly explored.

The Ceylon Citizenship Act of 1948 allowed Indians who were born in Ceylon to citizenship & 145,000 Indian Tamils gained citizenship which G G Ponnambalam supported. In 1964 and 1974 more Indians were given citizenship in Sri Lanka. These “citizens” were Malabars that the British, Dutch & Portuguese had imported.

The 1976 Vaddokoddai Resolution of TULF is a lie because there was no separate Tamil kingdom in North Sri Lanka & East was never part of any Tamil kingdom ever. If Tamils are going back in time plucking numerous phases to claim a Tamil kingdom existed & to demand self-determination, then the Sinhalese have more right to claim self-determination in the very areas that the Tamils seek as their kings ruled these areas and there is enough evidence to prove so.

That the East was part of the Kandyan Kingdom is proved when on 14 May 1638 King Rajasinghe II, King of Kandy travelled to Batticoloa to sign a treaty with Adam Westerwold of the Dutch Navy sealing alliance between Dutch & the Sinhalese against the Portuguese (Kandyan Treaty of 1638) This treaty was signed 18 years after Sankili was deposed by the Portuguese.

In 1833 the Colebrooke & Cameroon reforms divided Ceylon into 5 provinces – Nuwara Kalaviya (Present North Central Province) was annexed to Northern Province while Thamankaduwa (Polonnaruwa) was annexed to Eastern Province. The British demarcation of provinces were not based on historical habitats, ethnicities or language but for administrative needs & revenue making only.  So these British-created demarcations cannot be used for ethno-religious-language division of Sri Lanka.

The Tamil separatists have been lavishly using the Hugh Cleghorn minute as a basis to claim a Tamil Homeland. However, this famous minute refers to MALABARS & MALABARS are descendants from India & do not have origins in Sri Lanka to claim a homeland. Boatloads of MALABARS were brought to Ceylon as written by Captain Robert Percival in his book “An Account of the Island of Ceylon (1805)

It is time people start questioning how MALABARS can demand self-determination in Sri Lanka or claim “original habitats” as MALABARS were transported from South India by the colonials and settled in North & East of Sri Lanka. The task is to first separate MALABARS from the 1911 coined Ceylon Tamils because if they emerged from MALABARS, then they have no right to any separate homeland in Sri Lanka.