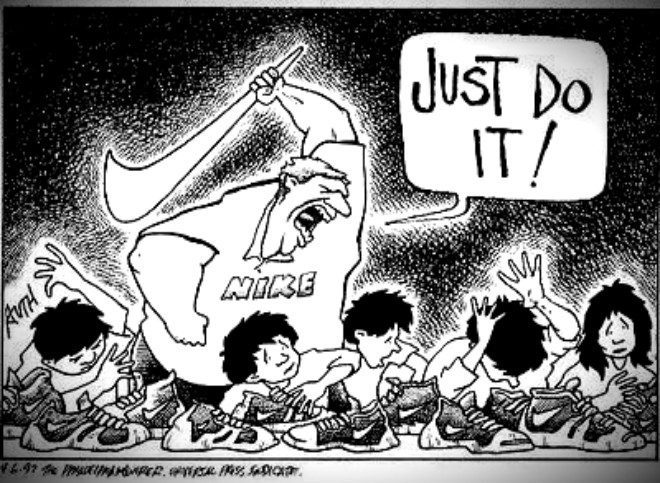 It is estimated that 80,000 companies drive the 21st century economy. How far do they exert political & economic power over their own country-govts to influence foreign governments & how far does this impact the national security, national economy & welfare of citizens?

Do MNCs abuse the poor in developing nations?

MNCs employ people in developing nations – but what is the quality of these jobs?

Coca Cola’s bottling facility in El Salvador hired sugar cane planters. OXFAM accused Coca Cola of paying lower than the minimum wage & they were prone to many health hazards. El Salvador could make no objections because of their high poverty rate.

Sweatshops are another means of MNCs exploiting people in developing nations. These factories are accused of employing 250m children, who have to work long hours, with low wages & in unsafe working environments. The branded clothes people proudly wear are from the sweat of these 250m children! The counter argument is that at least they have a job & money to eat & feed their families.

Are MNC good for developing economies?

MNCs provide jobs that didn’t exist, their employees can earn & feed their families inspite of working in hazardous conditions & they build factories which also generate jobs. These are short-term benefits. The MNCs often arrive promising x amount of investment for which they are offered tax holidays, import waivers, prime land with long leases. Do the host nations monitor if the promises amount is invested in the promised time, does the host nation quantify the amount the waivers and tax holidays cost against the investment? Does the host country ensure the investment does not return back to their nations? Most of the profits generated by MNCs located in developing nations goes back to the parent company. El Salvador where cane harvestors were toiling away the returns went back to Coca Cola’s executives in the US. Is this not the same for all MNCs operating in developing nations? Have host countries covered this aspect?

Are MNCs a challenge to local SMEs?

International companies arrive with pomp and pageantry. Their PR and communications are such that they present a notion that developing countries should feel lucky to have their presence. This fanfare often ends up a slap to local entrepreneurs & small businesses who cannot compete with MNCs. MNCs use this media hype to hold nations to ransom & dependency projecting a notion that any ill-actions against them will impact negatively on the host country diplomatically & economically. They use their diplomatic channels & international trade & monetary agencies to reinforce this. National governments do not want to upset the apple cart but their inactions costs local entrepreneurs & results in keeping national growth dictated by locals at minimum or zero level. Nations end up depending on outsiders to prop them up economically.

Another allegation thrown at MNCs is the inequality in salaries and perks. Low wages, unsafe working conditions, unfair human rights to the bulk of employees that generate the profits while the profits get shared amongst the cream of the top & shareholders.

We saw how powerful MNCs have ousted governments for bananas & oil. We know how companies can exert powerful countries to even overthrow governments & illegally invade them. MNCs often become as powerful as foreign-government sponsored NGOs/INGOs/Civil Society in a developing country. If a government does not function to its expectations they have numerous triggers to press to bring a government to its knees.

Majority of MNCs are US-owned & said to employ over 6.5million people. One of the primary reasons for foreign MNCs to relocate to developing nations is that they have greater freedoms to rule – they can engage cheaper labor, they enjoy bigger tax holidays, they enjoy VIP status, climates in developing nations are friendly, they can use least expensive methods to gain maximum profits, mingling with ruling & opposition political parties assures greater benefit to them once in power & through this means, they get undue favoritism and other advantages which they would not enjoy had they operated in their own countries. Translated this means that they too happily grease the hands that help to provide them maximum benefits. What happens in such a scenario is that the company & the politicians, public officials & even lobby groups walk away with the dividends while the costs get heaped on the citizens & tax payers. This is one of the key reasons why corrupt companies thrive alongside corrupt politicians and a corrupt political framework.

MNC-Political alliance often impacts employment laws and employment treatment as well. Corrupt companies are ever ready to set up in countries without strict health & safety laws and very little employee welfare systems exist but globally they preach and boast social responsibility & even walk away with awards.

The greater danger in the dependency on MNCs to prop up a nation’s economy is the eventual loss of national sovereignty as the host nation ends up losing control of the MNC after it sets up. MNCs often mirror the political interest/agenda of its respective nation. With majority of MNC’s being US-owned, this rings alarm bells. Eventually, the host nation ends up unable to control its economy because foreign businesses & foreign governments dictate to it especially because host nations have been lured to be import-oriented and not concentrate on local exports with self-sustainability programs which are often sidelined or intentionally made to be ignored. More importantly, is how the foreign companies & foreign governments after crippling a nation economically, lure countries to barter its natural resources & sell assets. All these added eventually ends up making a government irrelevant and a nation without national sovereignty & under defacto rule of foreigners. 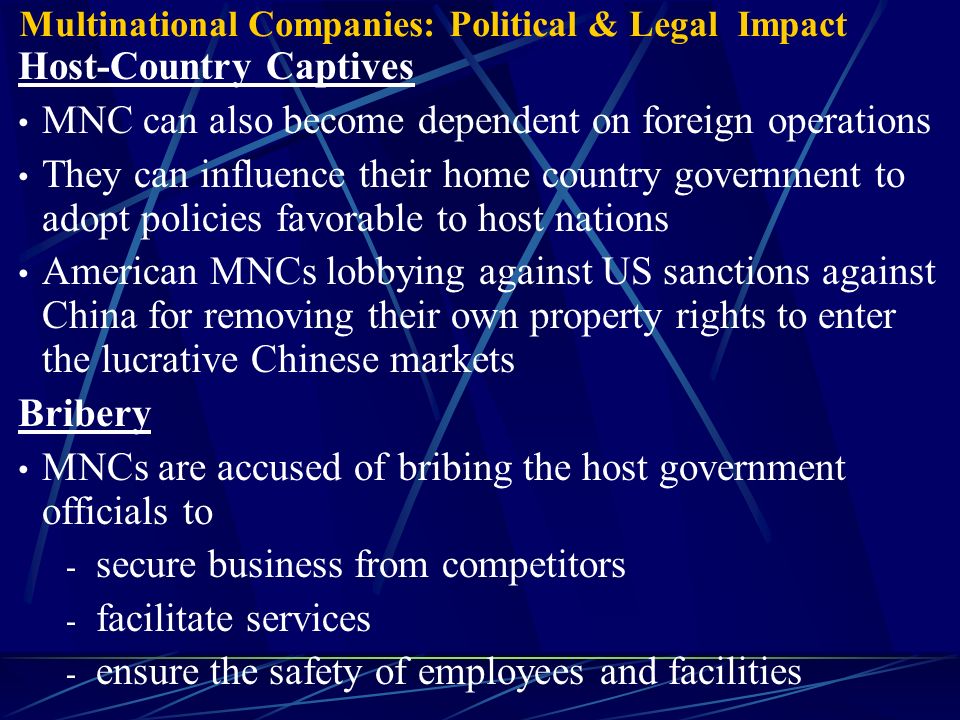 How many trade agreements signed are actually beneficial to the citizens of the country? How many of these trade clauses are manipulated by the importer/exporters. There have been numerous instances of expired goods imported to Sri Lanka – relabeled and exported. What’s thrown away in other countries are imported, filtered, repacked and sold locally (ex: oil)

This is maximizing profit by transferring pricing. The goal here is to reduce tax liability in those countries that have higher tax rate for the products & increase liability in countries with lower tax rate. This is done by shipping partly finished goods & components between different factories in different countries, transferring expensive goods from countries with high tax rate make their bottom line look healthy while transferring goods at a lower price to markets with lower tax rate to reduce their final tax bill. The ultimate result is that two or more countries lose valuable tax revenue because of financial loopholes in tax laws.

MNCs are transnational & loyal only to themselves

With IMF & World Bank steadily pushing liberalization & privatization in developing nation, MNCs descend like hawks as they are not tied to any one country & not loyal to any country except its top executives and shareholders. If they feel they can reap better benefits in another country, they will not hesitate to transfer their factories elsewhere. They will ship jobs to wherever they can build their products cheaper & they are not the least bothered that they leave communities financially in ruin as a result. Governments are at fault for their dependency without helping build local entrepreneurs to fill such a void.

MNCs are more powerful than governments

The whole world thinks the US & China are at odds, but then how many wonders why US MNCs are setting up shop in China? More than 40% of the world’s top MNCs are located in China.

US operates the biggest global MNCs & thus makes the greater impact on global economy. We saw how US MNCs opposed Trump administration policies. Majority of these MNCs have on their boards former Congressmen or top Public Officials who retire, others join global think tanks that exert pressure or lobby in other means. It all boils down to CONTACTS and CONNECTIONS. That’s where & how deals are made. This is why lobby groups & think tanks make their mark while the foot soldiers are their funded NGOs and Civil Society and now numerous “movements” that use the element of “protests” to get their way. Notice how protests are generating momentum globally & these are all with powerful hidden backing.

MNCs are pushers of preferential trade agreements & bilateral investment treaties & they ensure clauses beneficial to them is included. How far public officials of countries have background knowledge of this area is unknown. MNCs prefer international institutions pushing foreign governments into agreeing to their wishlists. We can imagine why IMF and WB favor liberalization and privatization!

MNCs use direct influence over governments via lobbying, indirect influence via state apparatus & other influence which varies. MNCs have been guilty of engaging in political activities/campaigning & even campaign funding & influencing policy making. They have also been guilty of working indirectly with industry associations & unions to advance their interests. MNCs also fund pressure groups that involve public, using communication channels, media, public protests & campaigns. These entities are used to get what MNCs want as well as to prevent government action against errant MNCs. The more MNCs interact with govt & its regulation teams, the more political action they gain for themselves.

US political campaigns generate the biggest funds from business lobbies. Politically connected firms always benefit with every win. Thus, every year the scope of funding increases knowing the outcome. Most firms prefer lobbying individually rather than through associations. MNCs that are pro-liberalization/privatization that lobby governments to win ensure their governments lobby this line with developing nations they want to set shop in.

The point in question is that MNCs are shaping economic reforms in many developing countries & this is impacting local policy decisions & affecting locals & governments are unable, unwilling to do anything about it primarily because MNCs are indirectly partnership with local entities that create the pressure not to take action.

People need to understand how these dynamics work and who the wheels of influence are greased.