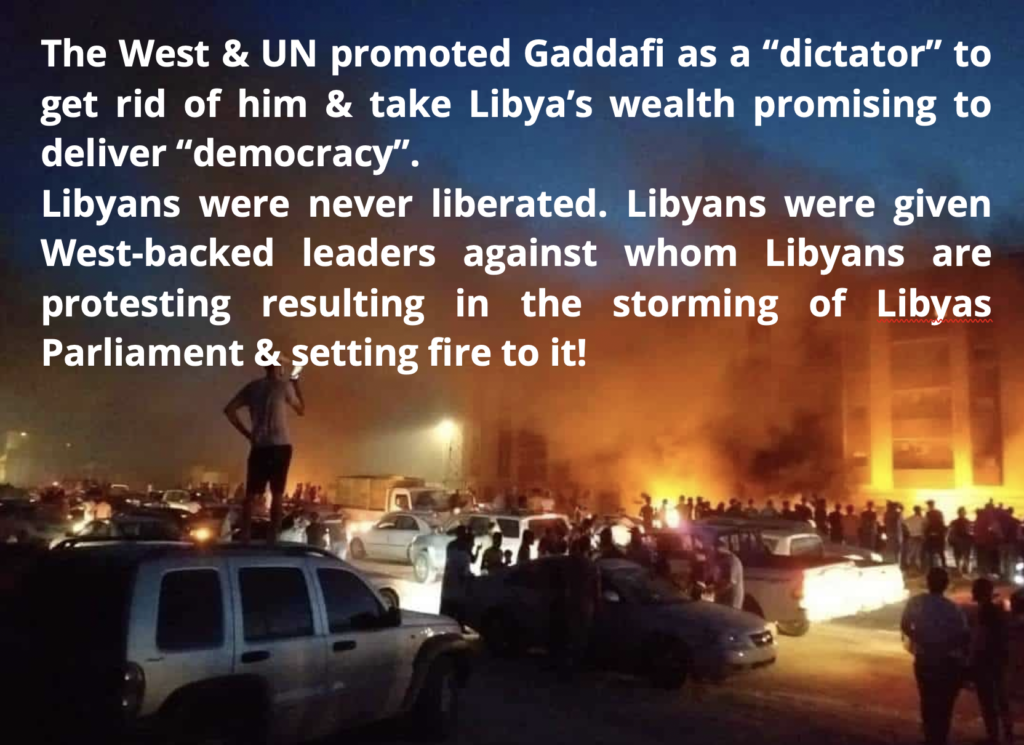 By the time we understand the truth it is too late, the damage has been done. For Libyans, they have to face their sad fate. Falling under heavily funded Western propaganda of lies turning Gaddafi into a ‘dictator’ and requiring to be ousted in order for Libyans to be liberated, Gaddafi was killed while US President & heads of armed forces watched. Hillary Clinton who was Vice President at the time laughed at his death “we came, we saw, he died”. 20 October 2011 Gaddafi was killed. To comprehend the tragedy that befell Libya and Libyans, it is important that people understand what Libya was like under Gaddafi & what Libya turned out to be after US-NATO delivered “democracy” to them. The liberation Libyans looked forward to after demise of Gaddafi never came. Libyans now realize, that Libyans were only promised lies to overthrow the US-NATO’s biggest obstacle – Gaddafi. Libyans were given a bogus deal Libya is a lost nation & Libyans have nowhere and no one to turn to. Is this the fate of Sri Lanka too. The Arab Spring is over & is Asian Spring starting off with Sri Lanka?

https://www.theguardian.com/world/2011/apr/20/libya-rebels-us-military-equipment-non-lethal Libya rebels get US aid

https://www.ejiltalk.org/does-sc-resolution-1973-permit-coalition-military-support-for-the-libyan-rebels/ – Is what US NATO doing legal while UN watches?

“We came, We Saw, He Died” – Hillary Clinton

How Gaddafi was killed

It is ironical that the same political pundits who portrayed Libyans living under an iron fist of Gaddafi today, give accounts of the deteriorating state of affairs in Libya now. In many ways, these people are also responsible for fooling Libyans into thinking they were in store for a superficial life that pro-West media & their commentators were promising.

Those that accuse Gaddafi of being a cruel dictator may like to explain why he would ratify international human rights legislations, treaties and conventions

Convention on the Elimination of All Forms of Discrimination against Women,

Convention on the Rights of the Child,

Convention Against Torture and Other Cruel, Inhuman or Degrading Treatment or Punishment

International Convention on the Elimination of all Forms of Racial Discrimination.

Ironically the UN-backed “transitional” government is not providing any women or children’s rights!

While there are enough critics to denounce Gaddafi & his record of human rights, not too many are desiring to say that the liberation that US-NATO promised Libyans has become far worse.

Libya never had Al Qaeda or other terrorist groups – today it is the hotbed for terrorism.

Libya that complained they had enough of a dictator are today riddled with no governance, no law & order, economic collapse (a country that was the richest in North Africa under Gaddafi)

With Gaddafi killed, a transitional authority was created. Notice the use of this term for Sri Lanka as well. After Gaddafi’s fall Libya came under the National Transitional Council formed in 2011. UN drafted a Libyan Political Agreement in 2015 creating a Unity Government – same created in Sri Lanka called “yahapalana”.

Since 2011 US NATO & UN have been toying with the Libyan military – disarming them, demobilizing them, reintegrating them – these are all clues for Sri Lanka to watch out for.

Insecurity prevailed in Libya after 2011, the growing Western influence in Sri Lanka is doing same. Same objective different modus operandi being rolled out. Libya saw a major increase in criminal networks, human smuggling, smuggling drugs, illicit goods, kidnappings etc evolve in Libya post-2011. With the ferry and uncalled for security-risk initiatives Sri Lanka is likely to witness same. Where there is no law & order or security framework a country is a heaven for all types of vultures.

It is obvious today, that the reason for Gaddafi to be ousted was oil & his efforts to trade in gold instead of currency.

US President in 2016 declared Libya was a mistake looking at the chaos in Libya. But Obama did not apologize for confiscating $30billion from Libya’s Central Bank in August 2011, money Gaddafi had set aside to establish the African Central Bank.

All signs for Sri Lanka. Obama also criticized UK David Cameroon & French President Sarkozy. Cameroon has been a major critic of Sri Lanka & quite a sympathizer of LTTE.

The bogus propaganda spread across the world about Gaddafi, carefully omitted that he provided education and healthcare free to all Libyans, $50,000 were given to newly-weds to buy their first home, while little or no propaganda is given to the ancient irrigation marvels in Sri Lanka, a lot is spoken about the man-made River Project by Gaddafi.  Unlike Sri Lanka, Libya did not have debts.

What is the point is now saying “Muammar will stay in our hearts forever” or “Gaddafi was no dictator” , for Libyans to say “we had security” under Gaddafi, says a lot about the plotters who promised to deliver democracy! It only now has dawned on Libyans that Gaddafi was hated because he was one of the few world leaders who had pluck to stand up to US, UK, France & UN.

US helped draft Libya’s new constitution, that has proved a failure too. Libyans stormed its Parliament & set fire to it. UN has failed Libya, US-UK-EU has failed Libya and now “transitional” western propped Libyans have failed Libya.

The situation has uncanny similarities to what is unfolding in Sri Lanka – Libyan demonstrators vow to continue protests against political elites of all parties & demanding that they all resign (this haunts the calls for 225+1 to resign in Sri Lanka) security forces protecting parliament withdrew from site (another uncanny observation to make). Many believe these are backed once more by western covert players. In both situations, there are mischief makers making merry out of people’s sufferings. Most often, the suffering is also created to enable the outcome which is also orchestrated by the same players. People are being manipulated without their knowing.

If Gaddafi was removed to grab Libya’s oil, what are the reasons for the West-UN interest in Sri Lanka? Time Sri Lankans put their thinking caps before it’s too late.

Leaving aside the situation unfolding in Libya, the Sri Lankan situation is exasperating for inspite of so much of hardships that the general public is undergoing politicians of all colours and the elites that benefit from them are having a whale of a time oblivious and uncaring about the suffering or desiring to even do anything about it except point fingers at each other in Parliament and score brownie points to have it telecast on tv and then join each other for tea, probably laughing at the general public for being so gullible.

Sri Lankan politicians will sooner than later realize they cannot fool the mases forever, while the other coterie of camouflaged so-called civil society players also backed by the same forces that manipulate politicians & possibly waiting in line to take over realm, are unlikely to deliver anything better & are only part of a bogus “transitional” hoodwinking.