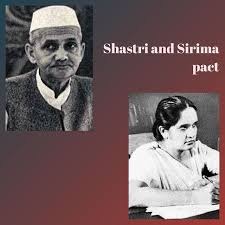 30 October 1964 marks a landmark agreement by Prime Minister of then Ceylon, Sirimavo Bandaranaike & Indian Prime Minister Lal Bahadur Shastri. It was formerly known as the Sirima-Shashtri Pact and was signed to solve the issue of citizenship of Indian workers living in then Ceylon.

Is a bilateral agreement deciding the citizenship of persons of Indian Origin granting 525,000 Indian citizenship and 300,000 Ceylonese citizenship.

Who are persons of Indian origin living in Ceylon

This question takes us back to the period of colonial rule and how indentured laborers were brought from India to work on plantations on the island.

The colonials completely changed the native and heritage cultural and administrative practices. Capitalist economic system & private entrepreneurship was introduced and land belonging to the natives was confiscated via Wasteland Ordinance Act of 1840. Falsely acquired land was sold to foreign private planters. Plantations needed workers and the vacuum was provided by bringing in South Indian workers in the central hill area.

They were brought down because they afforded cheap labor and mostly on account of Sinhalese refusing to work on plantations.

What is important to understand is that at the time of independence these indentured laborers were more than the so-called new nomenclature of Ceylon Tamils coined in 1911.

However, the question of what was to be their future when Ceylon gained independence was an issue. They did not come on their own free will. They were not invited by the Ceylonese – these Indians were forcibly brought to Ceylon to work by the colonial rulers. Ideally, it is they (Portuguese – Dutch and mostly British) who should provide them citizenship in their countries without demanding Ceylon provide citizenship to them. These colonials brought people from other countries to work for their personal profits and it is they who should have looked after them not dump them upon the country they brought the workers to work on. This debate continues!

Firstly, these workers brought in by the colonials were not citizens to be given citizenship & claim their rights were denied via citizenship act of 1949. If anyone had to solve the problem it was the creators of the problem. These were the colonials in particular the British. Having brought natives from other countries to work on plantations for their profit, the British & other colonials dump these people on the newly independent nations and demand they give them citizenship. This is the crux of the situation vis a vis Indians brought from South India and settled down in Sri Lanka.

It is true that while the same Tamils got termed as Ceylon Tamils on the one hand from 1911 the rest became simply Indian Estate Workers.

The Portuguese-Dutch-British used them, dumped them and then went off to their nations & demanded the newly independent colonies look after them. This was another phase of divide & rule. These Indian Tamils were made stateless not by Ceylon but by the Colonials.

The gist of the 1964 Sirima-Shashtri Pact was to afford a choice for those who were neither citizens of India nor Ceylon to choose where they wished to be citizens.

This number was 975,000 and excluded illegal migrants from India.

The status of the remaining 150,000 was to be decided later.

It is via these Indian estate workers that Sri Lanka’s tea industry thrives as a major economic contributor. Ceylon tea has become world famous.

Yet the immigrant factor was always an issue and an irritant between the two nations. Many illegal immigrants posed off as Hill Country Tamils. There was always the question of loyalty. Were they loyal to India or Sri Lanka. How far could India ‘influence’ them – then and even now. How would that pose a threat to Sri Lanka’s sovereignty. Yet, why were they dislodged even from the upper caste/class Tamil society. Mano Ganeshan would be able explain this treatment only too well.

Why was the fate of 150,000 not solved and how many has this number today increased to?

The 1964 Sirima-Shashtri Pact was amended against by the 1971 Sirima-Indira Pact and another in 1986 and in 1988 a law was passed to Grant Citizenship to Stateless Persons.

In the 1987 Indo-Lanka Accord (2.16d) repatriation of illegal Tamils was one of the 5 main clauses which India did not uphold and was a prerequisite condition to the validity of the accord.

The debate surrounding the issue of Tamil illegal immigrants, Tamil indentured labor, origin of Ceylon Tamils and the role of western divide & rule will continue but the facts cannot be kept under politically correct stalemate.