Height of Hypocrisy: US demands international probes against Sri Lanka but denies US war crimes probe! 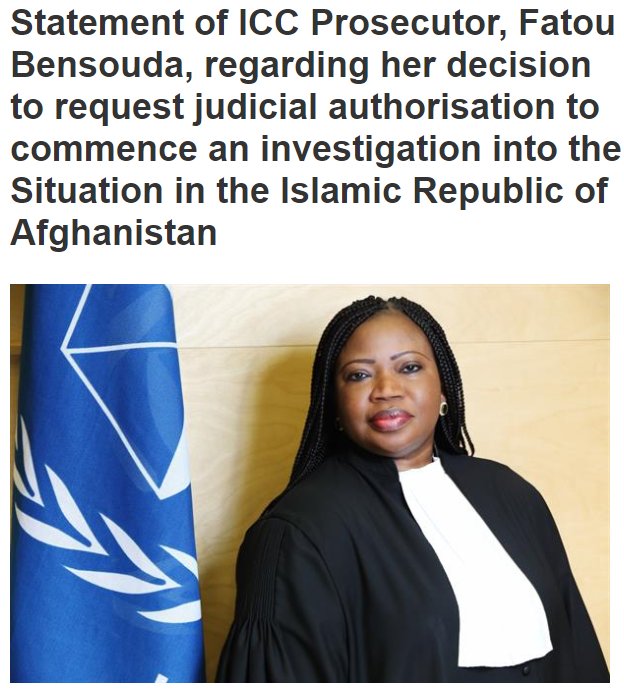 In November 2017, ICC Prosecutor Fatou Bensouda asked judges for authorization to open an investigation into alleged war crimes in Afghanistan. US & NATO bombed and invaded Afghanistan immediately after 9/11 blaming Afghanistan though none of the hijackers were even remotely connected to Afghanistan. US & NATO have been occupying Afghanistan since 2001. The war crimes cover period 2003-2004 and include countries CIA has prisoners in. According to Bensouda more than 10,000 civilians were said to have been killed from 2007 to 2011 alone. While US left UNHRC calling it a ‘cesspool of bias’ UK has taken over from US to co-sponsor another UNHRC resolution against Sri Lanka. The hypocrisies are such that the ICC is even investigating UK for war crimes in Iraq, is the UNHRC not aware that those seeking war crimes against small countries like Sri Lanka are the biggest perpetrators of war crimes for which the ICC is now attempting to investigate but are not being allowed to do so while both US & UK are demanding international investigations on Sri Lanka. US & UK and the UNHRC are hypocrites of the highest order.

The US has threatened to revoke or deny visas to ICC officials seeking to investigate war crimes by US forces in Afghanistan & elsewhere. US threat will apply to ICC officials if they purse war crimes against Israel too. So said US Secretary of State Mike Pompeo “we are determined to protect the American & allied military and civilian personnel from living in fear of unjust prosecution for actions taken to defend our great nation”. Not stopping there Pompeo also add “the ICC is attacking America’s rule of law” … Pompeo also made vile threats against anyone assisting too “I’am announcing a policy of US visa restrictions on those individuals directly responsible for any ICC investigation of US personnel’… which includes anyone who takes or has taken action to request or further an investigation.

ICC wants to investigate allegations of torture, cruel treatment, outrages upon personal dignity, rape, sexual violence against detainees in Afghanistan and other locations during 2003-2004 period by US military & intelligence agencies.

US is not a member of the ICC. US signed the Rome Statute in 2000 which created the ICC but did not ratify it.

In 2001 after George Bush came to power the American Service Members Protection Act was passed which made US troops immune from potential prosecution by ICC.

In 2002 US exited from the Rome Statute.

Afghanistan is a member of the ICC

Fatou Bensouda, chief prosecutor at the international criminal court in The Hague, has declared there is a “reasonable basis” to believe that UK soldiers committed war crimes against detainees during the Iraq conflict and will investigate claims that British troops abused and unlawfully killed prisoners after the US-led invasion.

US Calls on Sri Lanka to Investigate Alleged War Crimes

3 successive resolutions drafted by US against Sri Lanka was presented at the UNHRC in 2012, 2013, 2014 and in 2015 having successfully carried out a regime change to install a puppet government co-sponsorship of the resolution assuring a series of treacherous acts including changing of the constitution removal of the prevention of terrorism act and changes to the country’s penal codes, privatizing of land, removal of armed forces and trimming down of armed forces was agreed upon. Now in 2019 that same government has agreed to co-sponsor a resolution extending more time frame to realize what was promised in 2015.

No UN Resolutions are binding of any UN member state. UN officials have no mandate to raise the sword of Damocles upon any Member state either. Scores of irregularities and questionable illegalities are being committed by the UN and its Officials in violation of the UN Charter. Members cannot raise much noise because the system is entirely held by crooks as the spiraling allegations of corruptions taking place inside the UN foretells.

So what is hilarious is that US & UK being investigated for war crimes by the ICC are threatening to deny visa even sanction if investigations proceed against its troops while at the same time drafting resolutions demanding Sri Lanka be investigated for war crimes by international judges. UNHRC fully aware of US & UK being investigated are complicit in allowing sham resolutions against Sri Lanka that violate the UN Charter interfering beyond levels of acceptance into the internal affairs of a sovereign state.

Sadly, the whole UN system is corrupt that the citizens of Sri Lanka who are aware of the treacheries taking place doesn’t even have an honest mechanism of INDEPENDENT international authorities to even appeal to against the bias & illegalities taking place. It is disgusting to accept that even in the 21st century an international body such as the UN has become a puppet, corrupt in every corner and functioning totally against peace but creating new & worse issues for countries to handle by demanding changes to a country’s constitution, removal of terrorist laws, release of terrorists, removal of military bases, pruning of military and a plethora of internal structures that every new UNHRC resolution is demanding Sri Lanka accept on the flimsy excuse that it will promote reconciliation.