Can Yasmin Sooka & ITJP produce a CIVILIAN list of Missing/Dead instead of LTTE Terrorists! 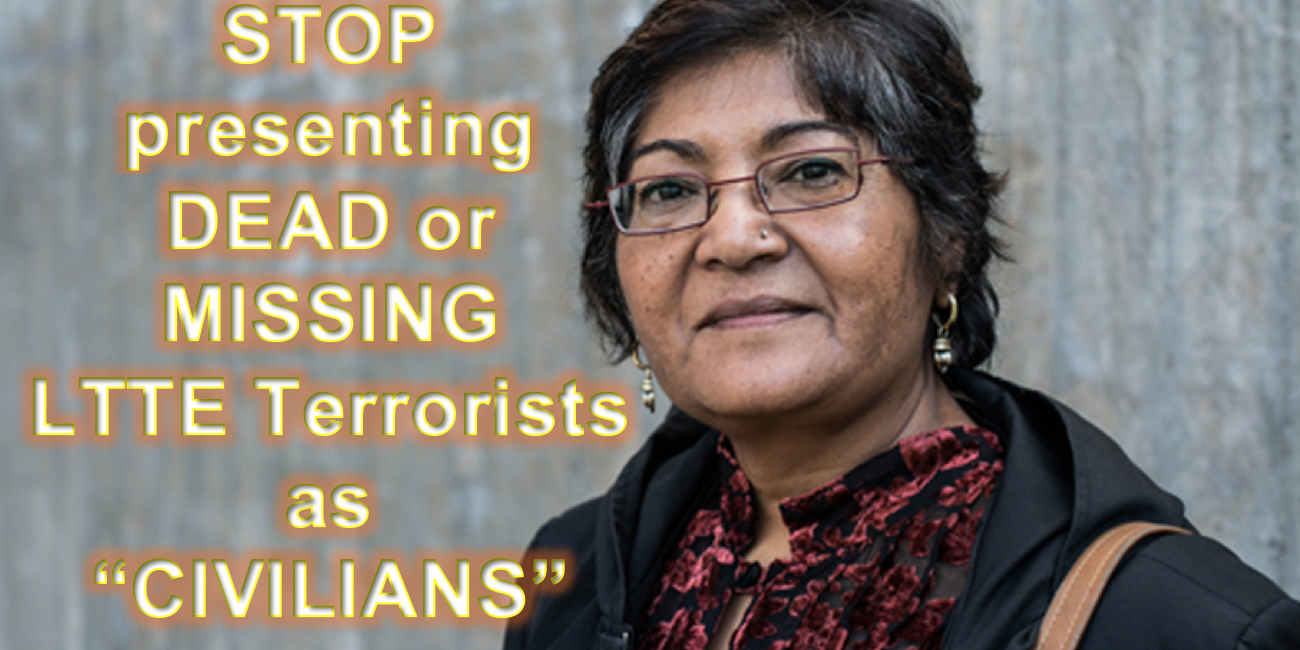 In 2018, Yasmin Sooka representing International Truth & Justice Project administered through the EU funded Foundation for Human Rights South Africa submitted to The Office on Missing Persons (OMP) Sri Lanka, set up by an Act of Parliament, a list of 351 names of persons her entity claims are ‘enforced disappearances’ during the final phase of the conflict. The ITJP website however has a list of 425 names, none of whom are CIVILIANS but all of whom are either LTTE combatant or a member of a LTTE family (Mahaveer). This exposes Sooka based on  her own report. The entire basis for claiming war crimes, crimes against humanity and genocide was based on the allegation that the Sri Lankan Army indiscriminately killed UNARMED CIVILIANS NOT ENGAGED IN ANY FORM OF HOSTILITIES. Returning fire in an armed conflict is allowed by rule of war as is the proportionality of collateral damage, all of which absolves the Sri Lanka Armed Forces of committing willful killing given that they brought to safety close to 300,000 Tamils at the sacrifice of thousands soldiers and over 1000 soldiers still remain missing, while engaged in battle with an armed terrorist movement even banned internationally. We all expected Sooka & ITJP to produce lists of civilians that they alleged the Sri Lankan Armed Forces had killed or made to disappear. Instead she is presenting over 400 LTTE combatants & their families. The Sri Lanka Armed Forces saved close to 300,000 Tamils including 12,000 LTTE among whom were 594 child soldiers. This speaks volumes and exposes Sooka & ITJP as a voice for not Tamil civilians but LTTE.

Some of the females are wives of LTTE while some wives are also LTTE combatants or working in some administrative position within the LTTE Inc.

There are unfortunately 32 children mentioned in this report as missing – all from Mahaveer families where either father, mother or both are LTTE combatants. It was highly unlikely that they would have attempted to cross over to Government side but would have remained till the end and probably had no choice given that they had to follow orders.

ITJP attached photos but only 2 female combatants were in LTTE uniform.

The rest were in casual clothing.

The youngest female combatant is 16years (3 such combatants)

All the disappeared are cited in 2009 except 1 where date is not mentioned. Location of disappearance is cited as

Another noteworthy feature that questions who these “WITNESSES” making allegations are gets exposed by Sooka’s report itself.

All of these witnesses had to have been directly or indirectly part of LTTE to have been able to recognize the LTTE combatants.

Other witnesses cited by ITJP are

There are some unimagineable comments in the ITJP report where ITJP claims families ‘personally handed over LTTE combatants to the Army” while there are “letters” sent from one end of war zone to the other end as if some form of courier operation existed during the height of battle.

ITJP gives photos of 18 male combatants in LTTE uniform – the rest are identified as LTTE by their designations.

Head of Voice of Tiger

You will be surprised at some of the other designations of these LTTE “missing” that Sooka is shedding crocodile tears for.

W46 claims to have seen 3 LTTE with Father Francis

W51 claims he saw 2 LTTE taken away after surrendering

W67 claims he was 14 LTTE put into a bus in Wadduwakkal but he also sees 1 LTTE in Omanthai on the same day!

W112 has seen 28 LTTE surrender with Father Francis and obviously knows much about the persons surrendering. We have to presume these ‘witnesses’ are themselves LTTE to be able to give such details to ITJP.

Photos are available of all

Complaints have been filed for 5 of the 19.

Photos are available of 12 sons except 1

ITJP claims one child disappeared on 21 April in Puthumathalan while all others are cited as 18 May from Wadduwakkal.

The oldest son is 14 years while the youngest is 3 years.

There are in all 26 witnesses whose credibility has to be questioned while also wondering if they too were in Army custody, how they managed to escape. Are they actually real witnesses or are these stories being made up? How did they land up overseas & linked to Sooka?

Why is it that Sooka’s entity has not presented a single CIVILIAN ‘missing’? How can missing LTTE be accepted as ‘civilian’ missing for which OMP is being manipulated to give compensation to families.

Shouldn’t LTTE Inc that must be generating more than $500m annual profits be looking after the families of these fighters given that they fought for their bogus Eelam cause? Why should the Sri Lankan tax payers pay compensation to LTTE families when these LTTE women & men took up arms against the State. Compensating REAL civilians is a different issue but Sooka’s list of LTTE presented to the OMP cannot be accepted as civilian dead and the OMP cannot recommend any compensation to these LTTE families.

It is the task of Sri Lanka Defense Ministry to see if Sooka’s 425 LTTE ‘Missing” are in the 10,435 LTTE dead who have yet to be identified.

The international entities who have fallen prey to SOOKA & her ITJP reports must seriously question her on why she is presenting LTTE COMBATANTS as CIVILIANS.

What took place was a non-international armed conflict. LTTE were no angels. They were an armed group, they had hierarchical power structure and was in fact the world’s only terrorist organization that had a sea wing – air attack plus ran police, courts, educational outlets, stores, pharmacies (all from medicines confiscated by the govt) and even forestry departments!

Sooka and ITJP have no right to present terrorists as civilians. This is completely negating and demeaning the status given to civilians in an armed conflict.

All the tamashas regarding civilian dead is in reality tamashas for LTTE dead. What is taking place is revenge by LTTE remnants against vanquishing their terrorist colleagues.

Genocide of CIVILIANS – NO