Those that demanded Sri Lanka stop ‘triumphalism’ when the nation celebrated victory over LTTE in May 2009, have been triumphing victory over Germany & Japan since 1945 by even enacting battle victories annually. V_E Day Europe has been celebrated annually since 1946 on 8 May. The 6year war ended with Germany’s surrender. Sri Lanka’s LTTE refused offers to lay down arms & surrender and was vanquished by the Sri Lanka Army in 3 years. What is special about this 75th anniversary V-E DAY for Germany is that the defeated country leader has announced a one-off public holiday as a ‘day of liberation and the toppling of the Nazi regime”. Now if a defeated country is also celebrating defeat of its own Nazi leader Hitler and regarding Hitler’s defeat as liberating the German people from Nazi rule, perhaps it’s time for Tamils too to openly celebrate the defeat of LTTE on 19 May 2009 and liberation of the Tamil people from LTTE tyranny.

The War began with Germany’s invasion of Poland on 1 September 1939. LTTE’s downfall began when it closed the Mavil Aru anicut in July 2006. The World War 2 saw 60million deaths. Sri Lanka’s Armed Forces saved close to 300,000 Tamils and accepted surrender of close to 12,000 LTTE combatants which included 594 child soldiers, later given a Presidential Pardon.

Hilter, the Nazi leader committed suicide on 30 April during the Battle of Berlin in 1945 but Prabakaran LTTE leader was too shy to bite his cyanide capsule and was killed trying to escape on 18 May 2009.

V-E Day is observed on May 8, 1945 in Great Britain, Western Europe, the United States and Australia, and on May 9 in the Soviet Union and New Zealand. In France, Norway and Russia, 8 May is a holiday.  The Allied countries annually re-enact battle victories. People get to see exactly how the War was fought.

All of the mega-events planned by Allied nations for the 75th anniversary victory over Germany has had to be scaled down because of COVID19. Veterans could not attend because of impact to health. 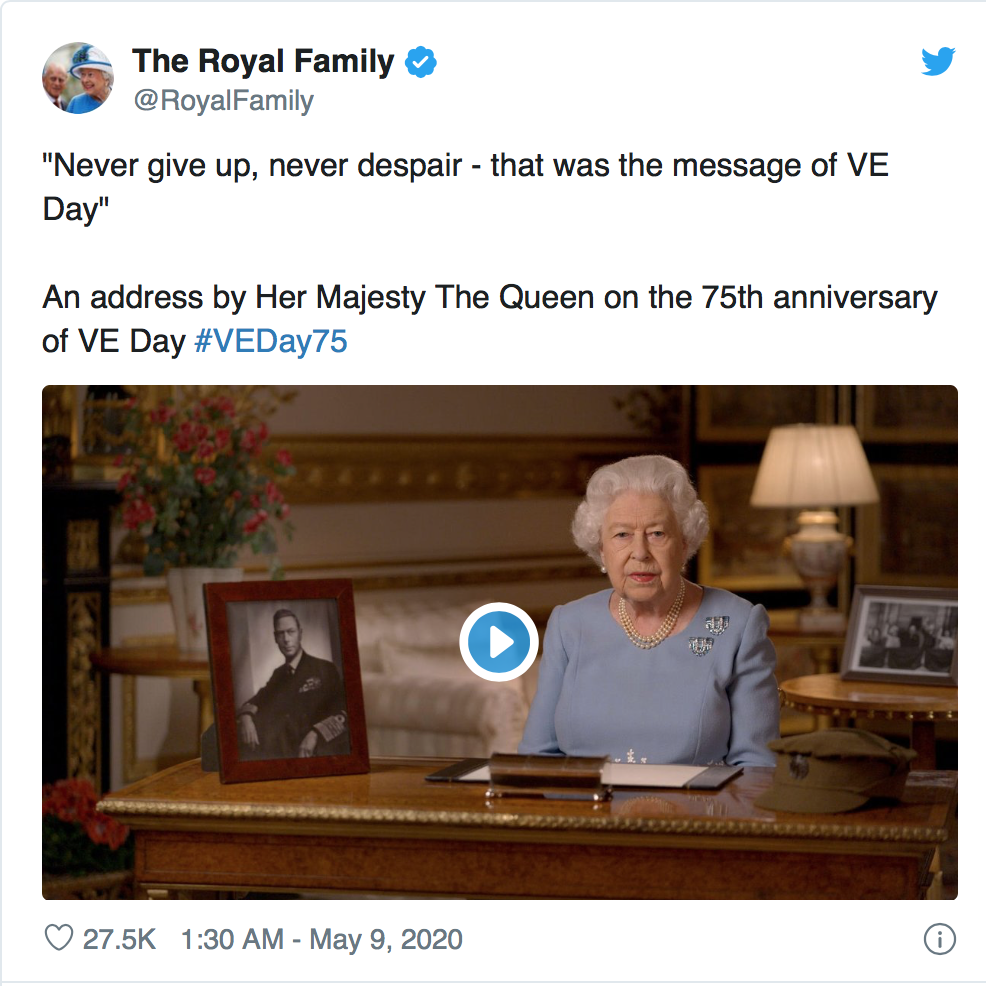 The Queen was just 19years on the first V-E Day celebrations.

US President Trump laid a wreath

In Brussels, NATO Secretary General Jens Stoltenberg marked the anniversary by honoring the millions who died in the war.

Post-World War 2 – How Germans were treated

Between 1945 and 1950, Europe witnessed the largest episode of forced migration. Between 12 million and 14 million German-speaking civilians were forcibly ejected from their places of birth in Czechoslovakia, Hungary, Romania, Yugoslavia, and what are today the western districts of Poland to ruined Germany. Historians claim some 500,000 died in this transfer operation.

Germans had to wear white armbands to be easily recognizable. German men, women and children were beaten mercilessly.

Historians claim over 1million German women were raped during and after. The UK Telegraph say some 3million Germans died after World War 2 and during Allied occupation of Germany.

Germany was defeated in 1945. But the Allies remained in Germany till 1955 (10 years Germany was occupied by the Allies)

The Berlin Wall that divided East and West German was destroyed in 1991 unifying Germany. It was only in 1994 that Allied Troops from US – UK and France left Germany having being stationed in Berlin since end World War 2.

However, under status of forces agreement US continues to have 21 military bases across Germany, https://militarybases.com/overseas/germany/

The very countries demanding Sri Lanka remove its troops inside its own country, maintain bases by force in Germany with thousands of foreign troop presence!

Tamils – take a lesson from Germany

While the Allied Troops have celebrated annually, Germany, the country that the Allies defeated use 8 May to commemorate the Germans who fought against Nazism and those that lost their lives in World War 2. Ideally, Sri Lanka must also use Sri Lanka’s Victory Day to remember with gratitude the many Tamils that bravely stood against LTTE and were killed by LTTE because of it.

Ironically, while Germany suffered for years after end of war, Sri Lanka’s North saw development never seen throughout defacto LTTE rule of 30 years. Roads, train service, renovations to schools and other properties damaged and even areas which never had electricity since 1980s saw a new life. All that the North was enjoying post-LTTE defeat was suppressed and diminished by the bandwagon of external trouble-makers who helped LTTE thrive and was partially seeking revenge and a means of sustaining their $300m annually profitable LTTE kitty alive. 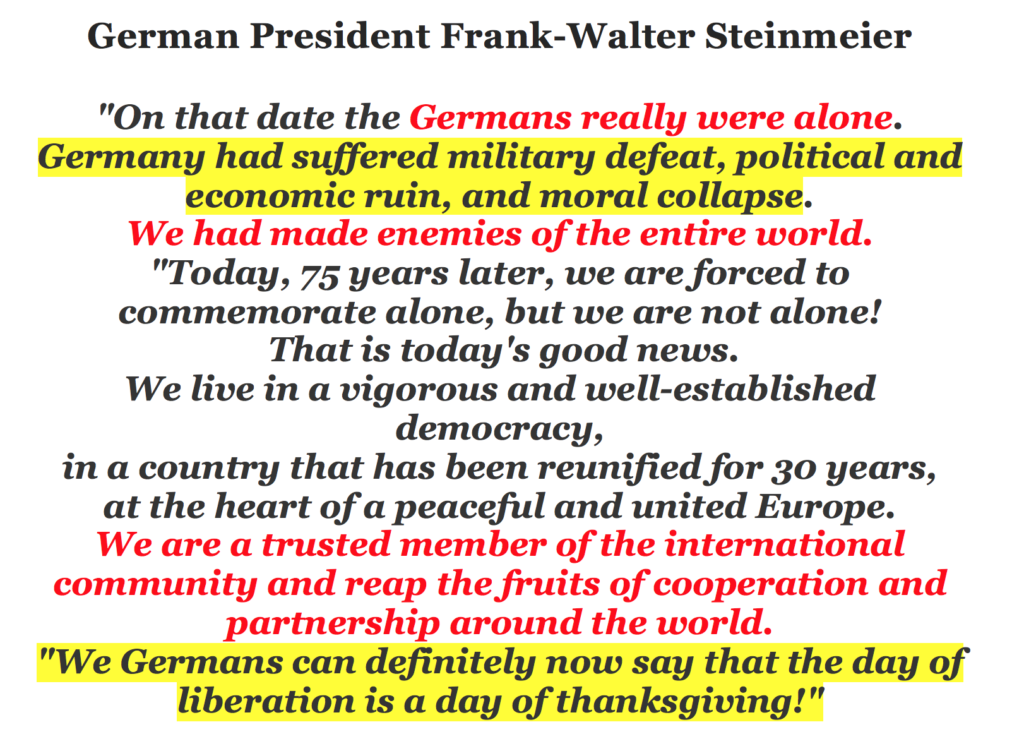 Allies celebrate 75 years since end of Hitler and Nazi rule. Sri Lanka in a few days-time will celebrate 11years since end of LTTE defeat. This is no better a time for the Tamils to relook at what life was like during LTTE rule, what life became for them after LTTE rule, how has TNA and other Tamil political parties actually served them, what are LTTE fronts really up to in drumming separatism while living overseas and holding foreign citizenship, how large is the LTTE kitty now without expense on maintaining LTTE combatants and buying weapons, who is running the global LTTE illegal network that profits from money laundering, credit card scams, hawala system, tax holiday manipulations by registering as charities, human smuggling, illegal refugee application process that involves paying to get burnt with cigarette butt ends and trained to act in front of foreign immigration officials to gain sympathy …. How long can this façade continue? How many have benefitted from this system of lying and cheating? Isn’t it better to be inclusive citizens and partner development instead of aligning to the bogus bandwagon of lies and liars?

If Germany are now looking at defeat of Hitler & Nazis as being liberated, it is good for Tamils to also think that they have been liberated of Prabakaran & LTTE.