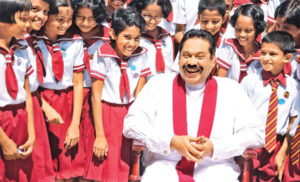 The regime change that took place in January 2015 has brought about unprecedented and shocking changes to Sri Lanka at virtually every level. In all probability those that make up what we were then promised was good governance – yahapalana, maybe themselves grinning & bearing the changes which they too know are threats to Sri Lanka’s sovereignty. Their pride will never allow them to admit their folly or will to reverse them or probably the exposure of the handouts given may be used as threat against them. Be that as it may it is important we take stock of the situation. We cannot allow an island nation with such a proud history to become a slave state when at no time in history Sri Lanka had been invaded except for those that gifted the island nation to foreign forces for their own personal gains.

It is clear that every public office has been infiltrated with their stooges placed in important positions leaking classified information, helping obtain sensitive information etc. We have noted the traitors in foreign ministry, elections commission, parliament, important ministries, even secretaries & senior officials have probably been tapped. All of them must be investigated at a future date & exposed.

The revelation by the Central Bank Governor at the PSC confirmed that the CB was not consulted on the monetary exchange bills passed in parliament & immediately raises the question – who then drafted the Bills that Parliament controversially passed often without a majority vote? The land privatization act is another such Bill that had been drafted by foreigners with local names plugged for cosmetic purposes. Bills have got passed controversially and its removal now requires 2/3 majority. This cannot be accepted.

We have to also realize that all those who planned, funded & executed the regime change of January 2015 did so with a bigger plan and it was far more than getting rid of Rajapakse. These plotters are unlikely to wish to give up all that they had spent time & money on. Understandably, they have increased the accelerator to fast forward their plans & implement them through the puppets they have placed in power before the puppets are overthrown at the next election. So we have to now be more conscious of what they will plan to do next – obviously they are playing with different sets of plans, putting forward different groups of people, all with back up plans as well. We need to begin guessing what these likely scenarios are and how to handle them.

The Opposition has a formidable task ahead of them. They cannot do this alone but they must take the stewardship on behalf of the people. Staying silent so as not to anger the external parties plotting against the country is something our voters are today smart enough to read through.

The Opposition must be mindful that just as the voters are fed up with the ruling government they are not so gaga about the Opposition unless they present a plan for how they are going to take Sri Lanka out of the mess the present government has put the country in.

The Opposition must also take into account that various initiatives are already being rolled out to break the votes. The Opposition must ensure that the voters are not taken for another ride of lies and bogus promises like last time.

How do we address this? Firstly, it is important for all to realize that the ‘ethnic’ ‘minority’ card will be used in different formats closer to elections with more power.

The Sinhalese are today quite disgusted with how the minorities have misused and abused the Sinhalese. Yes, in 1983 Tamils were attacked. No, the Tamils were not attacked by Sinhalese. Yes, the Tamils were attacked by goons despatched by the UNP. These thugs did not have any ethnicity or religion – they were just overjoyed about looting homes. Yes, Tamils got an opportunity to go overseas as refugees. No, the Tamils that went as refugees were not ALL victims of 1983, they just made use of the slogan to apply & gain refugee status. This ‘discrimination’ sing song has been drummed enough & more times. Sinhaless have kept silent because they knew that minorities were simply wanting to go to a western country & start a better life & help their families. But, when this lie is repeatedly told & now people are paid to be trained to cry & accuse Sinhalese of crimes they did not commit, we think it is now time to stop the lies. Sinhalese are really fed up being used as a battering ram for other people’s agendas. It’s just not fair by the Sinhalese and we are thankful that some minorities are also realizing this now.

The Opposition having made alliances with various minority ethnic parties must immediately assign them to present what they perceive are minority grievances & what they perceive to be the solutions based on the premise that no right can be demanded if it infringes on the rights & freedoms of others.

This document is important for it should be used as a basis for the Opposition to reach out to the minorities & present to them what their own people have proposed.

It would be good for the Opposition to prepare a list of questions that these minority alliances must answer.

We need to somehow put to rest this bogus notion of minorities being discriminated or facing discriminations because they are a minority.

This is also a good way to filter minority parties who for political advantage are part of the Opposition and not for any other reason.

It is important for the Opposition to implement this for this will nullify any attempts by external forces to drum ethnic racial beats closer to elections.

Report on every Bill passed by Yahapalana since January 2015

The Opposition must also appoint a high-profile Committee of experts to study every Bill that the Yahapalana Govt has passed in Parliament and circulars or gazette notifications issued so that a clear picture will be seen as to who drafted the proposals and to whose advantage these proposals are and it will be crystal clear that all of the proposals passed as Bills have been produced by foreign lawyers, foreign experts, IMF/WB/ADB officials and a plethora of transnational corporate lobbyists who are experts are implementing neocolonial agendas in developing nations.

All of these Bills that the government has happily implemented via the budgets presented have nothing of value for Sri Lankan citizens except for some $ handout shown as investment after which the foreign companies end up draining Sri Lanka of its resources and plundering whatever we have left. Money is slowly eating up our sovereignty because we have a bunch of politicians unable to understand how the global sharks function. The dangerous implications of the Bills passed simplified & presented to the People will make them understand the plight the country is in & who brought the country to this status.

This is no time to be playing buddy buddy with politicians in Parliament. The Opposition has a major role to play and it is not to simply come to power. From the 19a to all of the illegal and dangerous Acts that have been passed the Opposition MPs must divide subject matter and bring out these treacheries to the public. This is far better election campaigning than simply shouting and pointing fingers at each other.

People today want facts & evidence, the Opposition must now give them that. With a rising floating vote, people disillusioned and angry with the CHANGE that was promised & was never meant to be given, the People are waiting for an opportunity to take their revenge. The Opposition must now educate the voters to help them decide.

If the Opposition wants to come to power, they must realize that winning an election is not enough. They must have a plan to either nullify all of the detrimental agreements signed or a means to neutralize their effect on Sri Lanka & its people.

The Opposition is dreaming if it thinks that the People are voting for them just to get rid of the present government if the Opposition plans to continue all that the present Government has passed. The people are not interested in exchanging the pillow unless the contents of the pillow they are changing has something better to offer them.

Opposition Leader, Opposition Presidential Candidate & Opposition – The ball is in your court