Who are the people tasked to listen to grievances? A government & its apparatus, society groups, the courts at local level and then at international levels – the UN, international organizations etc. These entities have been around for quite a while now but whose problems have they listened to and whose problems have they solved?  What are the people’s problems they have identified & solved? More importantly are those voted in as people’s representatives actually voicing the people’s problem properly or have they been articulating something else? This is what the public must now determine. There is little point voting for people if they are not voicing what the people want and instead using the people’s vote to carry out a separate agenda. With this understanding let us proceed to determine what are Tamil people’s problems and how exclusive they are and what Tamil politician’s problems are and to whose problems governments and the world have been listening to.

What are Tamil people’s problems and are they exclusive to Tamils or common problems faced by Sinhalese & Muslims to.

What are these common problems faced by all citizens? A good school for their children, access to clean drinking water, basic toilet, a place called home with a roof, paved road, health facilities, means of transport to go to school & work, ability to find a job or livelihood are just a handful of very basic needs that immediately come to mind. All communities in Sri Lanka have some issue or the other related to one of these very basic requirements.

(What Tamils really want is obviously NOT want TNA wants)

The Tamil leaders demanded devolution and that was given in 1987 via 13th amendment. Its been 32 years now and what is the benefit that the ordinary Tamil people have got from devolution of powers (36 of the 37 subjects have been devolved) via 13a and PC system? TNA took over the province in 2013 proof that TNA has failed to deliver is depicted in the funds TNA requested not being utilized and returning to the Treasury!

To realize what Tamil people want the voice of Wijayaratnam Surendram needs to be heard. What does he say? He says only the TNA wants to divide the country, merge the North & East but the Tamils don’t want this. He goes on to say that the Tamil people only want houses to live in not merging provinces. He says that Tamils must go to the South and the Southern people must come to the North and that all people must eat, drink, live happily together.

He says many a Tamil child was sacrificed throughout the past conflict and the same fate should not happen to another generation. If you look at all the Tamil politicians making these demands – they are all a bunch of old men who obviously do not care about a future generation.

A S J S Jayasri says that TNA has fooled the people and won elections – he highlights how much Jaffna has deteriorated since TNA took over the province – ganja, drugs, murder rape and all types of violations have increased and TNA are not bothered to solve any of them because TNA are linked to the culprits and doing business deals with them.

The video also highlights that Wigneswaran’s daughter was married to a Sinhalese but he is prohibiting Tamils from marrying Sinhalese.

So have you heard TNA articulating these sentiments of Tamil people or spending the funds for their comforts? Shouldn’t TNA be questioned as to why they are not giving Tamils what they want instead of telling Tamils to demand what Tamil leaders want?

Let’s just jerk our memories a bit about what Tamil leaders have been demanding.

A plan behind Tamil leadership & their ideology

ITAK is the main constituent party of the TNA – it spends most of its time asking for a new constitution and to abolish the executive presidency nothing that Tamils have demanded.

ITAK was formed in 1949 a year after independence – its real name means Tamil State Party which implies its quest is to create a Tamil state. Its camouflage is to call its English translation as Federal Party. ITAK claims it was formed because of Sinhala discrimination – how can that be when from 1505 the island was under foreign dominance & rule (443 years) and Sri Lanka became a Republic only in 1972. Prior to that even with independence the Head of the State from 1948 to 1972 was the Queen and final judicial verdicts were by UK privy council.

From setting up a party to create a Tamil State in 1949, the ITAK went on to hold its 1st convention in 1951 declaring what constituted a Tamil Nation ‘nation distinct from that of the Sinhalese by every fundamental test of nationhood” http://tnapolitics.org/?page_id=80

Then in 1956 ITAK convention in Trincomalee passed a resolution

In 1957 ITAK started an anti-Sri campaign tarring cars that bore vehicle number plate ‘SRI’ – counter campaigns started only afterwards. The same year ITAK objected to Ministers from South visiting North & East – Ministers Dahanayake & Marikkar were attacked in Batticoloa & MP Siriwardena on a mail train to Jaffna was blocked. So these chants to prevent Sinhalese coming to North did not start with LTTE but with Tamil leaders.

ITAK leader Chelvanayagam winning the by-election in 1975 declared I will to announce to my people and to the country that I consider the verdict at this election as a mandate that the Tamil Eelam Nation should exercise the sovereignty already vested in the Tamil people and become free”.

But that was not what the people asked or wanted.

Then we come to May 1976 the infamous Vaddukoddai Resolution with 5 objectives. Notice the similarities of what the Tamil leaders demand & what LTTE demanded.

If demand was for equal language rights –why make Tamil the official language of the State of Tamil Eelam?

Let’s see how similar the Vaddukoddai Resolution demands are with LTTE demands made in 1985 during the Thimpu Talks.

We think that ITAK & TNA are speaking on behalf of Tamil people but are they really?

In 2012 Sambanthan referred to ‘Tamil youth who sacrificed their lives in armed struggle’ the only Tamil youth who sacrificed their lives in an armed struggle were the LTTE. So Sambanthan was remembering LTTE! At the same Convention Sambanthan says ITAK is the ‘political symbol of the Tamil Nation’.and then at the 2014 ITAK convention Sambanthan goes on to say TULF of which our party was a member took the historical decision to establish the separate government of Tamil Eelam in 1976”

So we know the stand of TNA vis a vis Tamil Nation and Tamil Eelam but how many have looked at TNA and LTTE links? 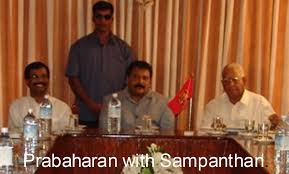 TNA 2001 manifesto demanded recognition of inalienable right of self-determination of the Tamil nation.”… commencement of

TNA 2004 manifesto claimed an Independent Tamil Eelam received its mandate as a result of the overwhelming support given to the TULF by the Tamil speaking people of North East in the general elections of July 1977” and that the ‘Sinhala Nation’ should accept the ISGA document proposed by LTTE. TNA even demanded that the restrictions placed on LTTE should be removed.

TNA went on to claim LTTE as the authentic sole representative of the Tamil people”. Not stopping there TNA went on to say LTTE’s leadership was the national leadership of Tamil Eelam Tamils.

TNA 2004 manifesto declared that under the leadership of the LTTE for a life of liberty, honor and justice for the Tamil people. Let us work side by side with the LTTE, who are fighting for the protection and autonomous life of the Tamil speaking people, for the political initiatives under their leadership.”

Let us assume that these demands were made during heyday of LTTE rule now let us look at TNA manifestos after the defeat of the LTTE in May 2009.

TNA 2010 Manifesto did not change its earlier stand – ITAK remembered why TULF passed the Vaddukoddai Resolution in 1976 for the right of the Tamil People to self -determination” but not ITAK began chanting ‘devolution of powers over land, law & order, socio-economic development & fiscal powers’. ITAK wanted ‘direct foreign investment in the North & East’. ITAK began bringing a new word into public domain ‘united country’.

We all know the key role TNA played to influence Tamils to vote regime change in January 2015 Presidential Elections so TNA manifesto of August 2015 is important. TNA continued call this time referring it as our right to determine our destiny to ensure self-government in the Tamil Speaking North-East of the country within a united and undivided Sri Lanka.” TNA made reference to Tamil Speaking Northern and Eastern provinces is the historical habitation of the Tamil People and the Tamil Speaking Peoples” and add that Tamils were entitled to self-determination in keeping with United Nations International Covenants on Civil and Political Rights and Economic, Social and Cultural Rights, both of which Sri Lanka has accepted and acceded to”.

TNA also demanded devolution of power based on shared sovereignty’ in all areas that virtually mean running a separate state.

Then came a list of new demands – de-militarization / removal of armed forces / high security zones from North & East when Tamil people were openly saying that they wanted the Army to stay on. This Tamil-people & Army pow-pow was not going to fair well with the TNA who realized that too much friendship would automatically remove them from playing role of go-between and so pocket protests were staged and their friends in the international/local media circles made a circus out of a handful protesting to project that ALL TAMILS were against the Armed Forces.

Sambanthan says the issue (self-determination for Tamils) is the same.

Sambanthan says the struggle (self-determination for Tamils) is the same

Sambanthan says their aims are the same (but strategies are different)

Sambanthan says the players are the same (but alliances are different

That is the nature of the Tamil people. Although we still have the same aim, the methods we use are now different”

Did you see TNA or ITAK demanding anything that is relevant to the needs of the 95% Tamils who simply want education, a home, a job etc. What TNA and ITAK has been demanding throughout is nothing short of what LTTE hijacked to justify its existence.

What Tamils really want is obviously NOT want TNA wants to give them. Many a Tamil is now realizing this and TNA/ITAK popularity is dwindling. Soon Tamils will stop voting TNA/ITAK simply because they are Tamil and it is timely that Tamils find national thinking Tamil leaders and politically reject TNA & ITAK and all similar thinking politicians.