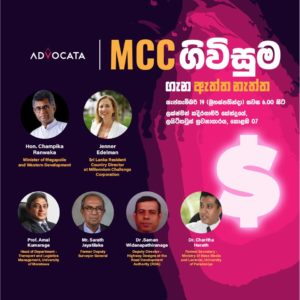 A growing number of citizens are becoming aware of the dangers to Sri Lanka’s sovereignty as a result of the MCC proposal together with SOFA & ACSA. They view this as unnecessarily putting Sri Lanka in the middle of political tensions between China & US. Sri Lanka does not wish to be victim of power rivalries. We would rather maintain cordial relations with all independent nations of the world. Advocta is organizing a seminar to answer questions on MCC on 19 September 2019 at the Lakshman Kadiragamar Centre at 6p.m. Please raise some of these questions to those trying to justify land grabbing of Sri Lanka.

WHAT IS THE ROLE OF ADVOCATA (Member of Atlas Network)?

Advocata is a Colombo-based think tank launched in May 2016.

On its board locals include:

Is MCC replacing or redefining the role that had been tasked to USAID previously?

Is ADVOCATA connected US administration & funded by US Corporates – if so are they not promoting their own project?

If MCC is not making any demands or ‘conditions’ who wants 10 land registries for the 7 Districts?

According to Sarojini Dutt’s article 3 public officials allowed US access to their offices & allowed them to interfere in internal affairs of a sovereign state. Registrar General of Lands (Gunasekera)

What is the govt response to public officers allowing unsupervised access to foreigners inside state offices to digitalize Sri Lanka’s Land Register?

Sri Lanka has done ¾ of MCC demands. All done without the knowledge of the People & in secret. 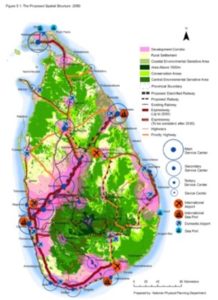 If MCC grant is supposed to be a gift as said by new Country Director Ms Edelman, why did she sternly declare “we shall sign the agreement before 17 September 2019, if the people do not like it, the President, they elect can annul the Compact at that time”?

On what basis did US MCC Compact Grant suddenly increase ‘gift’ from $420m to $480m – where was the transparency MCC boasts about?

MCC Country Director Edelman says this US ‘gift’ of ‘$480m has no attached conditions and is an outright grant and does not have to be repaid. Then why are they taking so much pains to visit professional organizations, hold seminars, articles, tapping locals to promote their project? Just give the money!

According to Sarojini Dutt a gift horse becomes a Trojan Horse when the ‘supposed gift’ is attached to conditions. To receive $480m ‘gift’ Sri Lanka has to sign an agreement with MCC who is setting the conditions for the gift.

Edelman says there is ‘no special economic corridor running from Colombo to Trincomalee’ then why was there a MCC created MAP showing the route of this railway line shown in Temple Trees on 25 September 2018 in the presence of then President of Bar Association U R L de Silva, legal officers from various banks?

If MCC grant is for all of Sri Lanka why is it only covering 7 districts along the Colombo-Trincomalee Economic Corridor and representing spatial structure of Sri Lanka in 2050 as perceived by MCC?

Is this ‘electronic railway line’ not dividing North from South taking parts of ancient heritage areas (Anuradhapura) to the North?

Is the ‘Economic Corridor’ holding 1.2m acres of land to tap and take over Sri Lanka’s natural resources – phosphate, limenite, monazite, thorium and other precious metals?

By giving 1m deeds along this corridor has the Govt not removed the restriction on the Govt and enabled MCC directly to purchase lands from the farmers?

Foreigners could not own land until law was changed by present Govt but restricted to 14% private land and limited to 50 acres.

The 84% other land goes as ‘Protective’ Land not for sale but available for lease if the President (temporary custodian of the land) decides to lease it.

It is the President and not the provinces that can decide to lease land from this 84%.

How can 84% land that should only be for lease be made available for outright foreign sale and the limit of 50 acres be removed?

We have witnessed the PM issuing 1m deeds to farmers who have been given lease ownership and the President has placed his seal as is mandated by law.

By giving these deeds the lease land they occupied is now privatized.

What will happen to these 1m farmers if their lands are bought over by MCC?

Is it correct to assume as per MCC “Constraints Analysis’ the US concern is their inability to access and buy-up land in Sri Lanka?

Is this not why MCC is demanding Sri Lanka to comply to all of its conditions first & accord US easy access to buy-up or lease land in Sri Lanka?

Is it correct to assume that US will soon buy-up Sri Lanka for $480m?

If Sri Lanka complies to all of MCC conditions – Land registries will be according to US wishes and they will soon buy up land of Sri Lanka’s poor farmers. Do Sri Lanka’s Govt not know that they are not only destroying our farmers livelihood but will leave them without a home or a means of living? Land grab in Africa is a good lesson for Sri Lanka.

MCC is trying to grab 84% of Sri Lanka’s land that is vested in the State as custodian.

MCC demand to privatize State Land (People’s Land) will enable MCC to acquire the State Land along the Economic Corridor from Colombo to Trincomalee.

Do farmers need a piece of paper (Deed)? Is it not better to give them water, fertilizer, warehouse facilitites for their harvest?

By giving a deed would these farmers not end up mortgaging their land to banks and banks seizing their lands when they cannot pay and then selling the land and MCC buying it for a song?

When MCC controls an economic corridor from Colombo to Trinco will it not affect Sri Lanka’s National Army in the event of a national security situation?

Isn’t there more possibilities of ‘LTTE’ terrorism rturning to North & Islamic terrorism in East all ‘enablers’ for US troop presence via ACSA & SOFA the two other detrimental agreements?

Was the construction of a ‘Muslim Univeristy’ purposely built to create Caliphate terrorists where there is also to be an international airport (South East of Polonnaruwa) – in an area bound by Vallachenai, Kattankudi, Batticaloa, Sainthamaruthu, Kalmunai, Amparai, Moneragala, Badulla and Hingurakgoda & where US Indo-Pacific Command & US troops can justify their presence?

According to Sarojini Dutt’s article a meeting between Hizbulla and US envoy took place 2 days before 21/4 Easter attacks.

Didn’t the MCC board approve the MCC Compact two days after the Easter attacks when Sri Lanka was in deep shock and majority of Sri Lanka were not in favor of the project? The Finance Minister and US Envoy announced this claiming Sri Lanka must be grateful for this ‘gift’.

Is another pre-condition of MCC before ‘gift’ of $480m can be given.

How can the US decide on Sri Lanka’s Land Policy?

Why should a Land Policy Research Council, Land Policy Office of the Ministry of Lands be subordinate to the MCC? Why should state officials report to foreigners?

In reading & understanding above the public can put into context the 4 attempts by the PM to pass the Land (Special Provisions) Bill but has been kept on hold by Supreme Court.

As per the Supreme Court verdict the Govt cannot sign MCC Compact.

Will US not do to Sri Lanka what it did to Hawaii – turning Sri Lanka into a US fiefdom?

The Supreme Court has dealt blows to the Govt

Is it therefore not ILLEGAL for the Govt to hand 1m deed ownership to farmers under existing constitution? Shouldn’t case be filed against this unconstitutional move?

Why should MCC & its officials get diplomatic immunity?

Why is MCC & MCC Employees & US Govt exempt from any liability for loss or damage resulting from activities of MCC?

If MCC & its employees are given exemptions and safeguards – how can Sri Lanka take action against MCC for any non compliance?

Where is the draft agreement? Why is it not shown to the public? Where does it state the actions to be taken if MCC obligations are not completed within 5 years?

What if MCC withdraws its funding – what are the dangers Sri Lanka would have walked into by weakening state systems and enabling foreign land grab via privatisation of People’s Land?