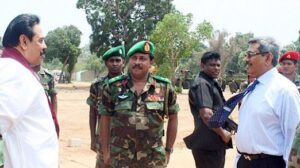 When the capital of the LTTE falls, it also signaled the end of the LTTE. That significant victory was delivered by Maj. Gen. Jagath Dias on 2ndJanuary 2009.With the fall of LTTE’s capital and stronghold, it virtually meant the end of the military offensive and the beginning of the humanitarian rescue operation. This is poignant for the UN, UNHRC and the foreign diplomats. It is also noteworthy that timed with the capture of Kilinochchi was the declaration by the President of Sri Lanka, Mahinda Rajapakse to the LTTE to surrender and lay down arms. This offer was refused by the LTTE declaring it would fight till the last man. It was thus LTTE’s choice to be annihilated by the Sri Lanka Armed Forces. With the capture of Kilinochchi the GoSL and the Sri Lanka Armed Forces in particular the leadership of Maj. Gen. Jagath Dias had achieved a Dutugemunu moment in history! The country was brought under one flag on 2 January 2009. It was the first time after a lapse of 3 decades that the country came under one flag. It brought to naught all of the claims of separatism, separate territories and self-determination & homeland bids. https://youtu.be/CuRg_vW1q8A 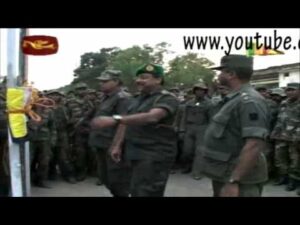 https://www.youtube.com/watch?v=CuRg_vW1q8A– Proud moment for all Sri Lankans when 57 Division led by Maj. Gen. Jagath Dias hoisted the national flag in LTTE’s claimed capital after capturing Kilinochchi from LTTE on 2 January 2009.

The President of Sri Lanka issued a victorious message “What our heroic troops have achieved is not only the capture of the great fortress of the LTTE, but a major victory in the world’s battle against terrorism”

https://www.youtube.com/watch?v=vIS8_K9VxCU– no prouder moment for our war heroes celebrating the capture of Kilinochchi – LTTE’s defacto capital on 2 January 2009. With that capture, the Tamil Eelam quest fell on its face militarily. 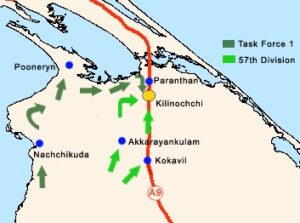 The LTTE reaction was a suicide bombing on the same day in front of the air force headquarters killing 3 and wounding over 30 persons.

The capture of Kilinochchi is momentous for the Sri Lanka Army having lost it to LTTE in 1990, recaptured in it 1996 and lost it again in 1998. 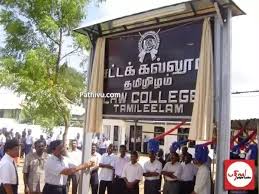 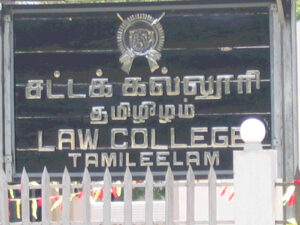 Kilinochchi was LTTE’s administrative hub after the 2002 Norway mediated infamous ceasefire agreement. LTTE had its own police force, Peace Secretariat, Bank, Courts all located in Kilinochchi. 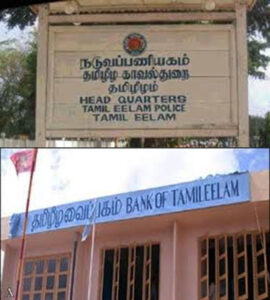 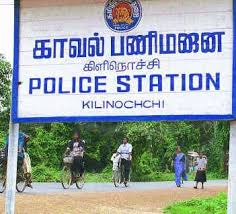 Noteworthy aspect of the victorious capture was that LTTE had all of its bigwigs defending Kilinochchi – Prabakaran’s son Charles Anthony, Imran Pandiyan brigades commanded by Theepan, Bhanu & Lawrence. 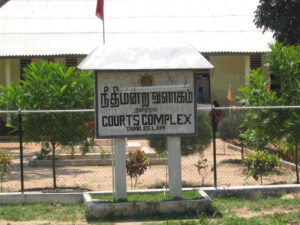 Also noteworthy is Prabakaran’s response when the government declared in October 2008 that it would capture Kilinochchi – Prabakaran declared capturing Kilinochchi was ‘just daydream of President Mahinda Rajapakse’. Prabakaran was proved wrong on 2 January 2009!

LTTE began withdrawing its combatants from Kilinochchi when Paranthan fell on 31 December 2008. It was just a matter of days that Kilinochchi came under the lion flag with virtually little resistance. Mullaitivu the other LTTE bastian fell on 25 January 2009.

It was no doubt a symbolic victory marked by fire crackers islandwide. LTTE was banned with the capture of Kilinochchi on 7 January 2009 for ‘using civilians as human shields in uncleared areas and endangering their lives, despite requests by the government to release them”. This ban and the reason for the ban was not given due international attention.

Thus, with the capture of LTTE’s defacto capital Kilinochchi on 2 January 2009 the symbolic defeat of the LTTE was written on the wall. The capture of Mullaitivu sealed LTTE fate further.

What needs to be highlighted is that with the significant capture of Kilinochchi, LTTE’s quest for separatism was thrown into shambles and it signaled the defeat of the LTTE.

With the end of Kilinochchi and Mullaitivu, LTTE was on the run and the Sri Lanka Armed Forces had completed the military offensive and commenced the humanitarian rescue operation.

That the GoSL and the Armed Forces appealed to the LTTE to release civilians from being kept as hostages and human shields is known by all.

That the UNSG & even diplomats also appealed to LTTE to release civilians from being kept as hostages and human shields is also known by all.

That LTTE didn’t care too hoots about their appeals is also a known fact.

As per rules of war, LTTE has erred in using civilians as hostages and human shields.

This important aspect is discussed in Palitha Senanayake’s new book.

The most important milestone is that on 2 January 2009, when Maj. Gen. Jagath Dias and his 57 Division captured Kilinochchi the capital of the LTTE, the military offensive against LTTE came to a finale.

Let Sri Lanka be judged by its achievements and victories not based on the disappointments & anger of those who angrily watched LTTE fall to defeat.