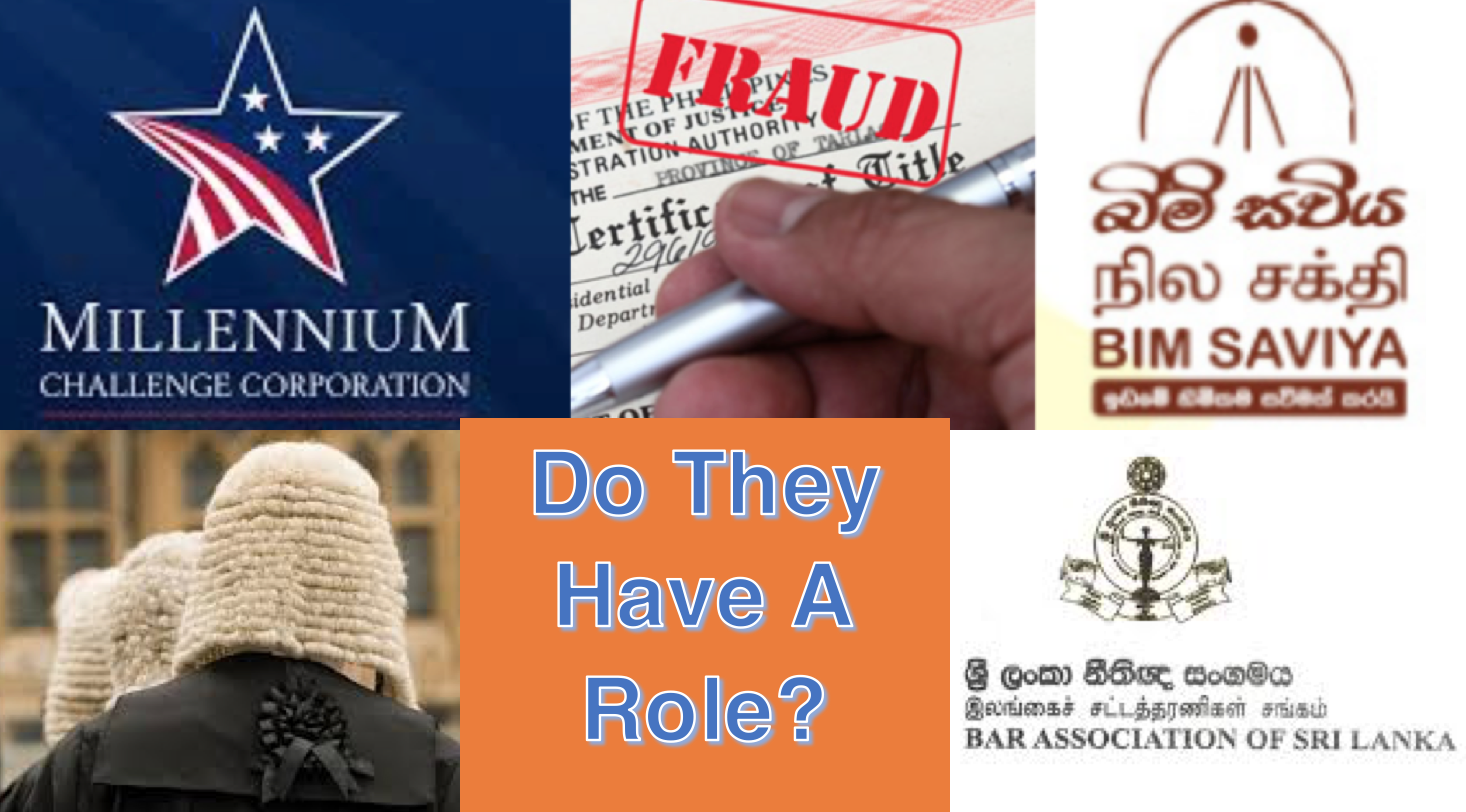 The Yahapalana Government & US Government finalized MCC (development arm of US Govt’s Pivot to Asia) in 2018. It was to create a dynamic market for land and was a key component in Yahapalana 8-year National Development Plan – Vision 2020: A Country Enriched. Land & Transport were identified as tools with which MCC would enter Sri Lanka with bim saviya & Title Registration Act playing a key role. MCC Land Project in Sri Lanka is going to use the bim saviya that has removed judicial authority in 1998 Act together with MCC immunity clause to grab our land and leave very little role for the legal fraternity to adjudicate our land rights legally.

Are lawyers & notaries aware their professions are at risk.

Annex 1-33 of MCC clearly shows US Government has laid down plans for Sri Lanka together with USAID, WORLD BANK, US EMBASSY and US Actors. Bim Saviya plays a pivotal role in this plan.

Annex 1-34 of MCC shows that Title Registration (Bim Saviya) will govern government lands that will all be privatized.

From 1998 to 2006 the Bim Saviya could not be launched because of the issues associated to it. It was essentially a failed project. Section 2 of Title Registration Act 1998 created a new title – Commissioner of Title. This separate department had a team of officials tasked to adjudicate judicial process. They were not lawyers but they were entrusted to examine land ownership of 12million land owners in Sri Lanka. These private & State land owners were to be governed by bim saviya. What actually happened was that the task of Judges & the Court was slowly transferred to public administration by the Title Commissioner thereby removing the 3rdpillar (Judiciary) of governance from the People.

Is this not a violation of the Constitution?

Commission of Title adjudication process has been a failure. This is evident in the Commissioner of Title Report of 2018. Only 700,000 blocks out of 12million blocks of land has been converted to bim saviya since 1998. Bim Saviya does not recognize customary laws of Sri Lanka specifically co-ownership. The Commissioner of Title’s role is made difficult because the adjudication process is minus the judiciary.

MCC is making use of bim saviya as it is a failed project which MCC can manipulate to its advantage. Even MCC in Annex 1-31 acknowledges failures of MCC. In order for MCC to take advantage, MCC is recommending amendments to existing laws Annex 1-34.

Why can’t the Government of Sri Lanka recommend that e-register continues with the existing DEED SYSTEM? Why amend MCC to incorporate what is already in practice by the DEED SYSTEM.

Why does a sovereign government have to accept recommendations from foreign bodies simply because of foreign funding?

How many are aware that after entry of owners name into the bim saviya registry, ownership is conclusive and cannot be altered.The real owner possessing deed cannot seek legal intervention if a fraudster has registered same land under bim saviya. The only relief given to the owner in the 1998 Act is to seek compensation for the land lost from the Government. The government too cannot give the land back to the owner. The role of the Judges in adjudicating land fraud is no more with Act 21, 1998.

Section 33 of Act 21 clearly establishes this. MCC will manipulate this.

Fraudster will register a land in his name, obtain the 12 digit number for a piece of land that does not belong to him and the real owner cannot go to courts after realizing what has happened to his land. His only relief is compensation awarded by the Title Commissioner. His land is lost to a fraudster.

With the role played by Judges & Court passed on to the Title Commissioner, the owner’s fundamental right to access court is denied.

Act 21, 1998 has removed the 3rdpillar from the People. Why has lawyers not raised this to the highest levels? Giving reports is not enough.

Role of judges in land matters is now limited. So too is the role of lawyers.

Let us imagine a poor farmer given freehold title to a piece of State land (he has been living on with a permit) as is being presently promoted by the previous government & even present government. He is now owner of several acres of land.

He is illiterate about electronic systems, he cannot converse or communicate in English. He does not have a deed as recommended by the Electronic Transaction Act 19 of 2006 Section 23. His notary too has no computer or internet to help him. Can the police, CID or even courts come to his help if someone has shifted his name with a forged deed?

He can go to Court – but the Court is likely to say he cannot get his land back & to seek compensation from the Title Commissioner. What he had as a permit holder is now lost. Not only does he not have a piece of land, he has no living or even a place to live & perhaps no compensation as the Govt has no money to give. This opens a new chapter in poverty but MCC claims its ‘gift’ is to alleviate poverty.

Does the Government have money in the Assurance Fund to give compensation for acres of land defrauded from owners?

What is the future of land litigation and the future of the judiciary with section 33 which states ‘ the register is conclusive evidence and ownership registered shall not be questioned in a court‘’ ?

What is the future of the banks that lend money on mortgages to a forged bim saviya registered owner? He can also cancel the mortgage bond.

What is the future of the existing cases before court?

Counsels who find defendants with Bim Saviya certificates obtained with the adjudication process of Title Commissioner running parallel to the judicial process of the country.  Can the judges dismiss the pending land cases?

Chaos at times in courts where trials come to naught with one owner with deed and another with bim saviya for the same land!

What is the future of Counsels who are unable to file legal remedies such as injunctions relating to land ownership?

What is the future of those who prescribe to land as the Bim Saviya repeals the law of prescription?Section 57 Act 21 of 1998

What is the future of notaries? Do they all practice in English[ MCC sates the language is English]   Do they all have computers and Internet ?

What is the future of Insurance remedy?where the government believes that monetary compensation can be granted to owners in lieu of owners’ rights to access court?

Many are advocating or promoting giving away of state land to farmers.

They believe ownership of lands grants money to owners and the poor will be rich. Anyone who owns land will know the cost of managing  land and cost of cultivation Only those who have deep pockets can cultivate as one has to wait for the crops to cover even the cost leaving alone profit.

Is the real intent to create the above scenario?

Imagine the fate of all the farmers who will have no land, no deed [Act 19 of 2006 specifically require deeds to be retained with the e-register]

With no rights to access court and no money to cultivate or manage land?

Have the legal fraternity [judges, counsel, notaries] not thought of their own livelihoods being at risk too from Bim Saviya MCC land program?

To satisfy the US and accept a paltry $480m – is it worth our professionals and our People and the Government ending up eventually landless and without professionals?