What will India do when US creates Eelam with Greater Tamil Nadu & separates Kashmir from India? 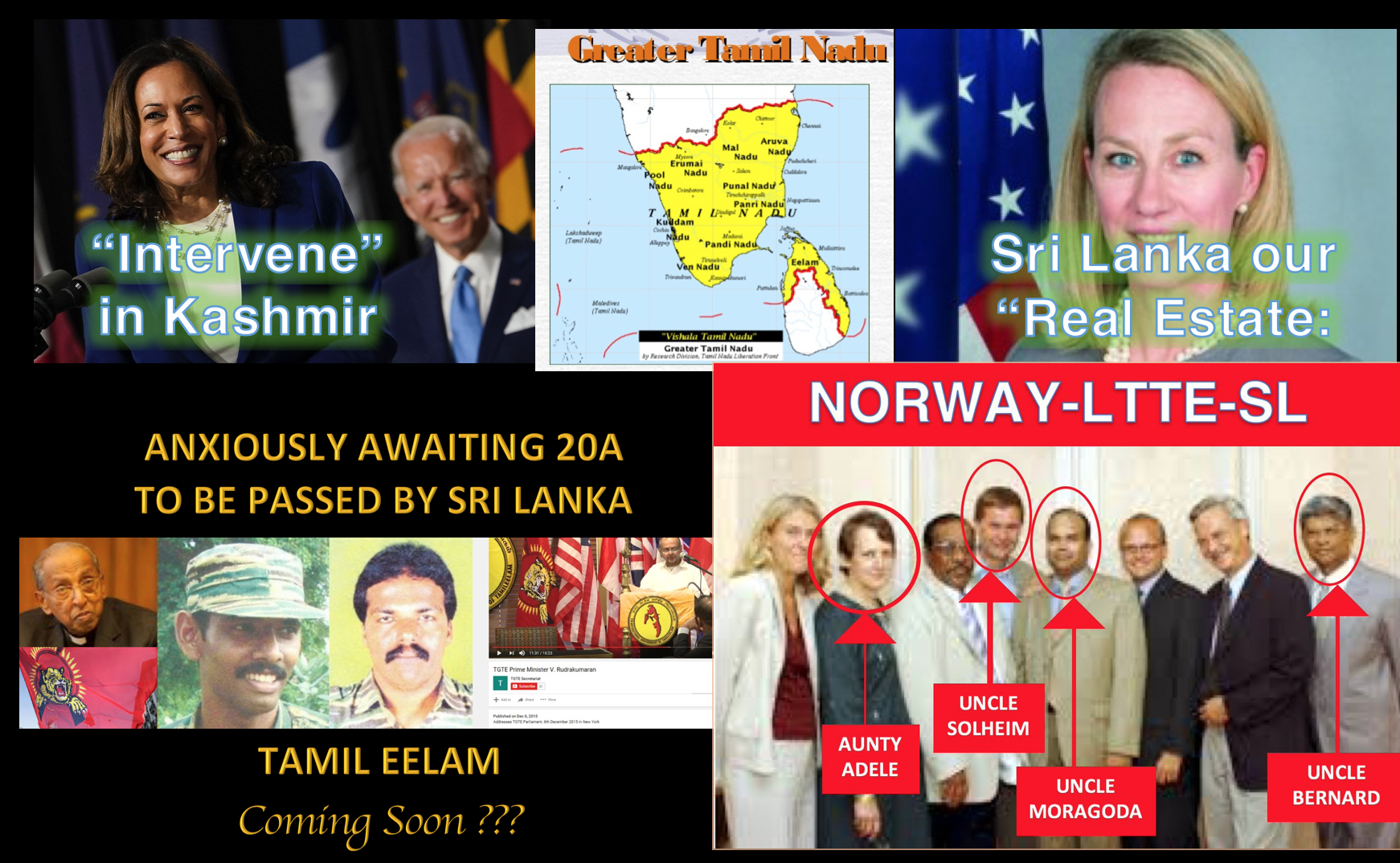 As of now India is on the best of terms with US and that partnership has etched out the Indo-US Pacific Strategy with India playing a greater role among Quad Nations. That India was a crucial link in US pivot to Asia is without a doubt and the US re-chartering its Asian venture is something that policy makers in both India & Sri Lanka must seriously worry about. The sudden rise in LTTE diaspora voices alongside the Church echoing a subtle ‘time to forgive’ and the silent manner western-government funded faith-organizations are evangelizing India & Sri Lanka is nothing India’s or Sri Lanka’s leader cannot ignore. The innuendo by Democratic VP candidate Kamala Harris on Kashmir and Indian Government’s own admission that Eelam includes Greater Tamil Nadu is a concern and behooves to question why Indian think tanks & Sri Lanka’s advisors are pretending not to see the dangers.

Though India played a major role in regime change in Sri Lanka, India was also well aware of LTTE’s threat on its shores. Now India is also nursing Jihadi terrorism. Though sample testing was done on Sri Lanka on Easter Sunday, India cannot afford to sit pretty thinking India is immune. It is worthwhile for India’s think tanks & strategists to rewind their memories to how LTTE came to be adopted by the West for their geopolitical agendas. Isn’t this why the LTTE Diaspora are happily conducting shows from western shores? Have any western government made any attempts to clip their kitty or stop any of their international illegal rackets?

Simply placing a cosmetic ban, just to show the world LTTE is banned but allowing LTTE remnants to carry on business as usual is just fooling themselves. Let us be realistic, none of the tie-coat LTTE diaspora wish to go to the jungles and dirty their suits taking up arms when a better alternative prevails. The power of money, lobbying and corrupt politicians are the ingredients post-terror groups with a rich kitty have found more powerful than the latest cruise missiles. LTTE Diaspora can hire or retain the world’s best lawyers, get foreign MPs to cry over terrorists killed and even get former UN heads to cry foul over LTTE bogus ‘genocides’.

But when the Indian Central Government & the Tamil Nadu Government tells a tribunal that LTTE continues to nurture a ‘greater Tamil Nadu’ (inclusive of Tamil Nadu, Kerala, Karnataka, Andhra Pradesh & North & East Sri Lanka) in 2014 December, we cannot but stop to wonder why India chose to play a role in regime change in Sri Lanka that brought to power the very coterie of characters who were wining and dining with these separatists. Did the arrival of a Chinese submarine to Sri Lanka, make blind India’s ability to identify the bigger threat? Can India that espouses to become a Permanent Member of the Security Council, even realize this dream if India is balkanized? An India that is continuously drumming ‘Concern for India’s National Security’ must realize that in helping weaken Sri Lanka, it has inadvertently weakened itself.

India may well like to take stock of the many NGOs it has revoked license, what their modus operandi had been, India may also like to look how entire villages across India are getting evangelicalized, even areas in Punjab. It is also happening in Sri Lanka to a lesser degree. But they have revamped their operations by building a set of people pretending to be faithful to the majority religion in both Sri Lanka & India but infiltrating the nationalist camps to draw people into their fold promising money & political positions. The weak and self-conceited always fall prey.

Both India & Sri Lanka in particular must be worried about the dual citizenship aspect of the 20a that enables all LTTE Diaspora to even contest & buy land in Sri Lanka & create that Greater Tamil Eelam for their Western masters and then return to their foreign shores and allow West to dock & turn into a base to challenge and take on their real enemies.

LTTE Diaspora thus will help the West create the Southern-end of their geopolitical pivot.

The topic of Kashmir is a thorn in any conversation with an India. It has a bitter past, bitter experiences and is a topic India and Indian officials evade responding to.

It is an open secret that Biden is simply the puppet posed to enable a Democratic victory with Harris being groomed to function as the defacto US President.

While entire India did voice glee at her nomination, the cheers have waned somewhat to being confined to Southern India, where Harris’s maternal family hails from.

Indians and in particular Indian strategists have unusually turned a blind eye to an interesting remark made by Harris on Kashmir.

“We have to remind Kashmiris that they are not alone in the world. We are keeping track of the situation. There is a need to interveneif the situation demands,”says U.S. Sen. Kamala Harris.

We all know what US means by ‘intervene’ it is to roll out R2P and this means Kashmir becomes Afghanistan, Iraq, Libya, Syria.

https://www.dailysabah.com/opinion/op-ed/will-kamala-harris-be-a-game-changer-for-kashmirWill Kamala Harris be a game-changer for Kashmir

It is strange that India is ignoring such a public announcement of future plans.

The reason why we are alert to the US designs on Sri Lanka vis a vis the Pivot to Asia using the 3D approach – Diplomacy (SOFA), Defense (ACSA) and Development (MCC) is that US signaled its designs referring to Sri Lanka as America’s ‘real-estate’.

“Sri Lanka occupies some very important real estate in the Indo-Pacific region, and it’s a country of increasing strategic importance in the Indian Ocean region”

This naturally fits into our fears of why US/MCC wishes Sri Lanka to privatize all land including State Land and remove every constitutional & legal impediment to do so & all these changes for a paltry $480 disbursed across 5 years. So why have Sri Lanka’s leaders not realized that US Pivot means acquiring Sri Lanka’s real estate for imperial West to roost as a trade, diplomatic & military hub.

In India’s frenzy to rub shoulders with the West and crown itself a partner in Quad against China, India has unfortunately ignored the dangers lurking and this is likely to end up India becoming another Yugoslavia & Soviet Union. India will no longer command the power and presence it yields currently even among the South Asian nations. How could India’s strategists ignore the writings on the wall. Sri Lanka’s strategists by chirping ‘India First’ are only showcasing their ignorance of the ground realities.