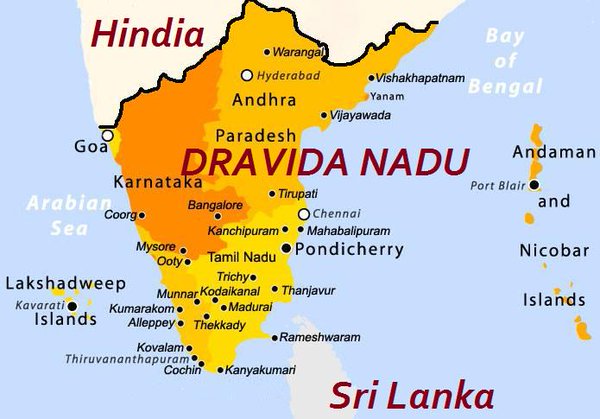 There was no term called Dravidian until a British missionary arriving in India in 1838 created it to serve several agendas of the Church. The next 40 years was spent in converting Hindu Tamils, promoting a fictitious history and setting natives against each other. Much of the conflicts, confusions and contradictions present today is as a result of the false history translated into English and notions spread among natives. If the Dravidian theory was artificially implanted by the Church, could it not be more than possible that the Church was instrumental in promoting the Tamil Eelam demand as well? Missionary-infused history was used in Tamil Nadu & Sri Lanka to separate both along ethno-linguistic lines but indirectly to be controlled by the Church.

Bishop Robert Caldwell & the Church took pains to separate Brahmins from non-Brahmins. They coined the term “Brahmanical Aryans” associating Indian Brahmins with Europeans. They took the low-caste Chanar people & referred to them as “Dravidian” separating them from the Brahmins.

The missionaries laid the foundation by emotionally attaching Tamils to protect their language, culture & literature (all the ingredients presently used in UN Self-Determination objectives)

The missionaries are responsible for propagating a false history.

The Church had thus divide people and pretended to be the saviors of the low-caste & poverty stricken. This was the carrot to convert. It is a model being practiced today, while Evangelical movements are preying on the richer lost-souls!

This means the word Dravidian did not exist prior to Caldwell coining it.

Bishop Caldwells book “A Comparative Grammar of the Dravidian or South Indian Family of Languages”. Noteworthy is that his book traces the beginning of Tamil literature to not earlier than 10th century CE and is a major shock to those championing Dravidian ideology.

Thus the “Dravidian” movement was led by a Christian & controlled by the Global Church. It was using the Dravidian Movement that the Church led demands for linguistic separatism of Tamils initially in Tamil Nadu & thereafter in Sri Lanka.

It is notable that Tamil Nadu is one of the biggest success stories of Christian Missionaries.

It was to incrementally divide & balkanize India and demand secessionism in Tamil Nadu while converting. This is the model that continues still. The Church rules Tamil Nadu far more powerfully than its State Government.

Robert Caldwell gave to Tamils a weapon by initially coining the term Dravidianism. However, illusory Dravidian or Tamil identity was, it Caldwell enabled it to be branded & eventually used as a launchpad for Tamil Eelam quest.

From 1900s – the project for a separate Tamil state continues & it is led not by Tamils but by the Church.

The Dravidian movement built the psyche of the Tamil speaking people of South India and in so doing aligned them with the Global Church.

The justification for the call for a Dravida Nadu was the mandatory requirement for Tamil Nadu to learn Hindi in 1938.

The Official language Act in 1956 in Sri Lanka was also used to justify demand for Tamil Eelam.

The Justice Party passed a resolution in 1938 claiming Tamils had a right to a separate sovereign state under direct control of London.

Tamils wanted independence but didn’t mind being under control of the white man!

In December 1939 “Dravida Nadu for Dravidians” for a separate sovereign & federal state was launched.

In June 1940 a Dravida Nadu map was released in Kanchipuram.

These “movements” also conflicted with the Indian Freedom Movement.

The British refused to entertain appeals for a separate Tamil state.

Eventually Dravida Nadu was replaced with “Tamil Nadu for Tamils” & later “We Tamil Movement” & later changed to a demand for an Independent Tamil Nadu, which the Indian Govt shot down by legislation against secessionism in 1963.

All of these ‘secessionist’ movements originated & was promoted by the Church.

Isn’t it more than curious that S J V Chelvanayagam, a Christian came from Malaysia to stir the pot of Tamils in Sri Lanka to create a political party ITAK seeking a separate Tamil state in Sri Lanka in 1949?

The demands for a Dravida Nadu are virtually the same as that which LTTE delegation & Tamil leadership demanded in Thimpu in 1985. Were these demands drafted by the same Church?

Having infused missionary-beneficial history amongst Tamils both in Tamil Nadu & Sri Lanka, generating the inspiration to secede & separate, the next step was an armed movement. Dravida Nadu movement led to the creation of a Tamil Nadu Liberation Army while the Tamil Eelam movement in Sri Lanka created Tamil militant groups from which LTTE emerged victor to hijack a quest started initially by Tamil politicians.

The end aim is the balkanizing of both India & even Sri Lanka.

The Missionary objective kicked off by Bishop Robert Caldwell continues even after his death.

A hashtag movement #DravidaNadu was relaunched in 2017 around about the same time India foolishly became a QUAD partner.

The power of the Church is shown in different ways.

In 2021 a Christian Pastor in Tamil Nadu declared “we are not 3.5%, we are 35% of the population” of India and urged the Crypto Christians to come out and admit they were Christians instead of hiding it.

Tamil Nadu politics is heavily influenced by the Church – it uses its global networks & NGOs to act as pressure groups against projects. We have seen this in Sri Lanka too.

The Church & Evangelical movements play a silent but powerful role in Tamil Nadu involved virtually every sphere – who people should vote for, projects that should be allowed or rejected, even what should be filmed or not (the Church got the DMK govt to ban screening of Da Vinci Code in 2006). Coastal areas are completely under Church control, a similar situation in Sri Lanka too.

No wonder the famous educationist of Tamil Nadu, Chithbavananda declared that the Dravidian movement was a time bomb set by the Church.

The Church is accused of providing tactical support to internal separatist conflicts in India. It should not surprise anyone how the Church openly supported the LTTE separatists.

The Church supports division of both Tamil Nadu & Sri Lanka’s North along lingo-religious lines to enable them to have a bigger stake.

Father Savary Muththu Bhaskaran, rector of St. Martin’s Seminary in Jaffna, was arrested in 2020  when organizing an event to commemorate LTTE.

An American Jesuit priest – Father Miller – disclosed to U.S. Embassy officers in Colombo that the orphanages where the LTTE recruited its child soldiers were run by churches.

Priests who were inside the No Fire Zone in Mullaitivu have also been accused of helping LTTE by forcibly recruiting hundreds of underaged children. Some 600 children had been sent to a Catholic Church located iN Walayarmadam – LTTE had arrived at this Church on 24 March 2009 and taken the children. This was not the only time the priest had been associated with helping LTTE.

LTTE’s radio station “Voice of Tigers” was located inside St. Sebastians Church Mallavi in 1999 and inside Madhu Church as well. Voice of Tigers collaborated with the Catholic broadcasting station Radio Veritas run by the Asian Catholic Bishops Conference. The Tamil service of Radio Veritas is managed by Tamil Catholics in Tamil Nadu.

Dravida Nadu and all of its offshoot movements were artificially created by the Global Church for their own agendas.

If the map of Dravida Nadu was also created by the Church, is the map of Tamil Eelam a Church creation as well?