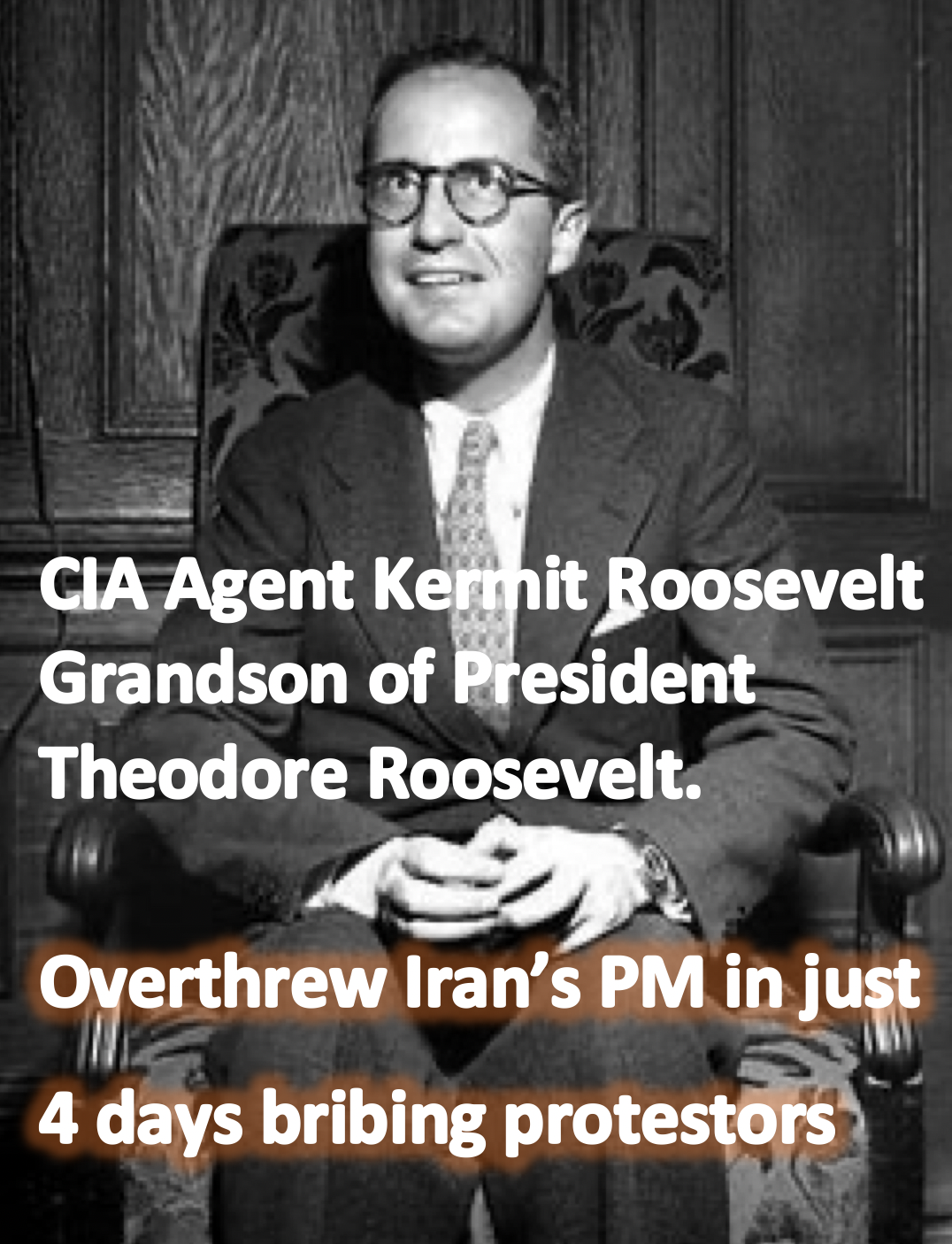 It took US 60 years (19 Aug 2013) of silence and denial to finally admit to its role in toppling the elected PM of Iran Mohammad Mossadegh on 19 August 1953. There was no social media then, no artificial intelligence, no NGOs of the kind present today, all it took was one US CIA agent – Kermit Roosevelt Jnr (grandson of US President Theodore Roosevelt). Kermit Roosevelt toppled a leader in just 4 days. Operation Ajax was the name of the coup started on 15th August 1953 and ending with the ouster on 19th August 1953. Kermit died aged 84 years in 2000 and was not alive to see US take responsibility for the coup he orchestrated. 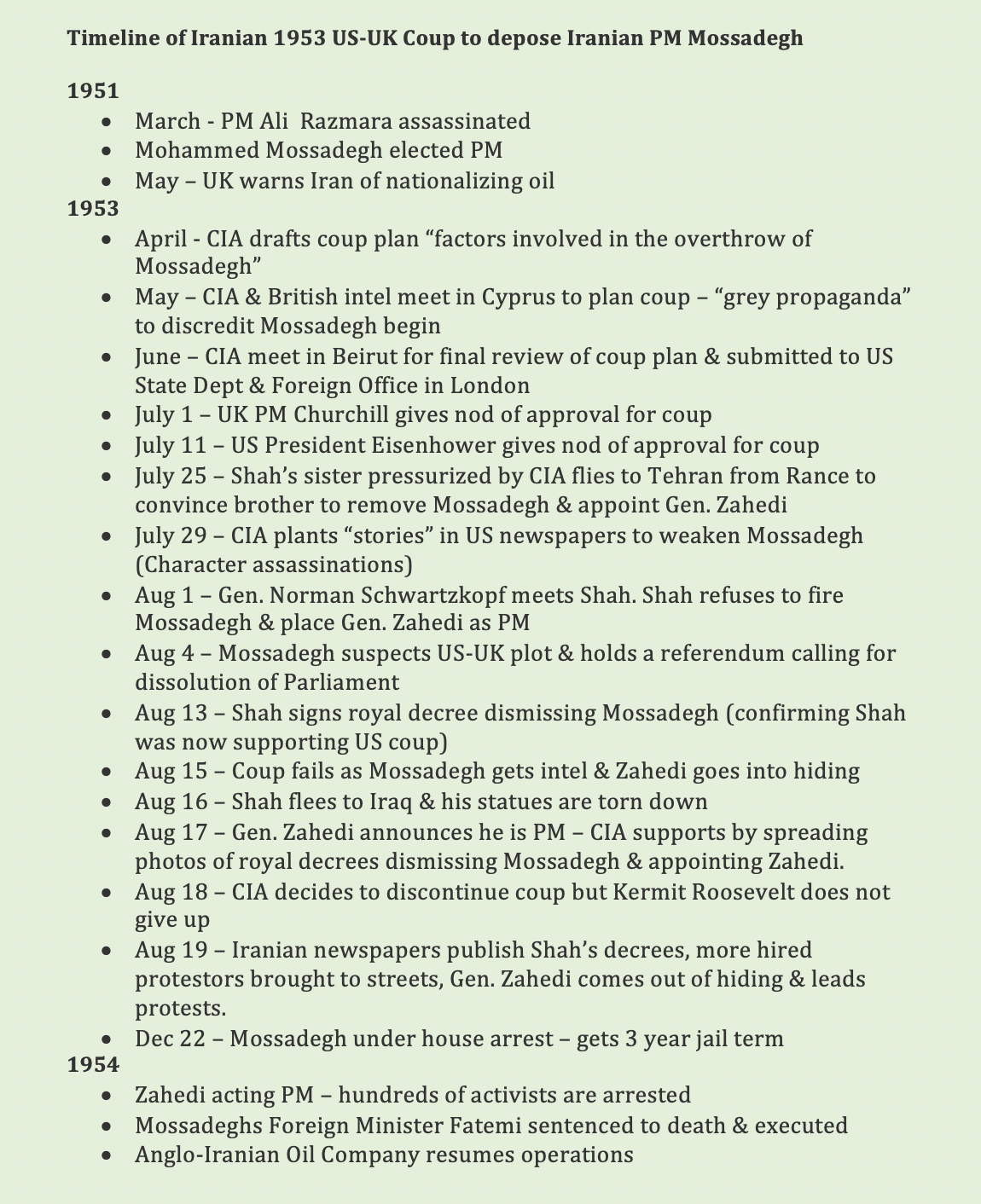 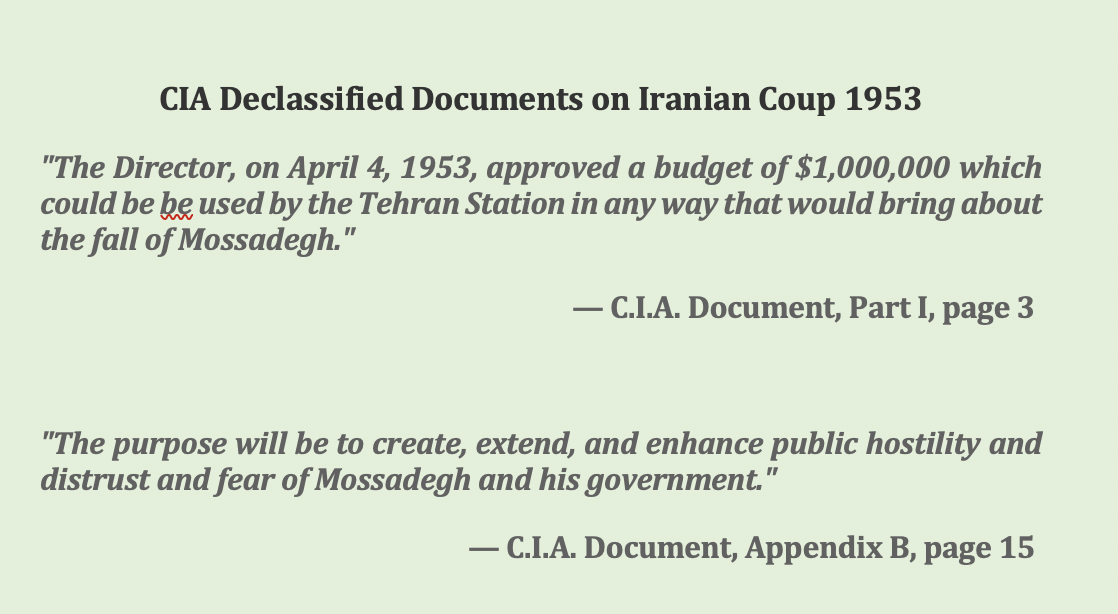 Who was Mohammad Mossadegh

He was a leader the Iranians held in high esteem & elected by the Iranian people in 1951.

Where did he go wrong

He began introducing a range of social & economic policies that led to the nationalization of Iranian oil which didn’t go too well with UK who controlled Iran’s oil via Anglo-Iranian Oil Co.

Lesson here is – any leader going against Western corporate interest will be overthrown!

CIA chased a democratically elected leader & brought in Mohammad Reza Pahlavi – the Shah of Iran. The Shah ruled for 25 years until 1979. Years of brutal suppression for which US has to account for.

Who was Kermit Roosevelt

Kermit joined Office of Strategic Services (OSS) in 1947 which was the predecessor of CIA. It was in February 1953 that British intel agents approached CIA head Allen Dulles & his brother Secretary of State John Foster Dulles (no nepotism here) to assign Kermit for the task. A request made in February 1953, received final approval in June 1953, Kermit arrived in Iran on 19 July 1953 and exactly a month later the coup succeeded after Kermit hired protestors/demonstrators & military officials. Leaders of US & UK were President Eisenhower and British PM Churchill.

Part of Operation Ajax was to work with nicknames – Shah was “Boy Scout’ and Mossadegh was “Old Bugger”.

What was Kermits role in the overthrow of Mossadegh

He bought people in media bribing them. Nothing new – we see it happening even presently.

Kermit got these paid media personnel to come up with anti-Mossadegh propaganda.

That happens even now in all parts of the world.

Kermit next turned to tapping the Islamic clergy – a tactic used presently too.

Kermit then plotted to capture Mossadegh from his home.

Mossadegh was captured after CIA tapped Iranians to capture their leader.

Countries that are geopolitically significant where US & West have their hotspots, the manner they operate cannot be missed.

Look at how Iran fell and tie them up with countries also under West’s radar.

Geopolitical importance of Iran for US/UK

Iran was needed to block Soviet access to the Persian Gulf. This meant the West required to ensure Iran’s oil reserves remained accessible to Western companies stationed in Iran since 1908.

Declassified documents revealing details of Operation Ajax is a public admission of CIA role in regime change which the US State Dept denied previously. US Secretary of State Madeline Albright in 2000 and President Obama in 2009 also referred to US role in coup. How many other coups has US denied while declassified documents have shown quite the opposite.

Hired crowds became a hallmark of US regime change operations in the present decade as well.

Iranian protestors did not know the US had funded the protests – they knew only years later.

The speculation of US involvement was raised but denied.

It took 60 years for US to admit to hiring and funding the protests and opposition needed to oust an elected PM.

The same blueprints are happening even in Sri Lanka.

What we can be sure of is that we shall only know the truth decades later!