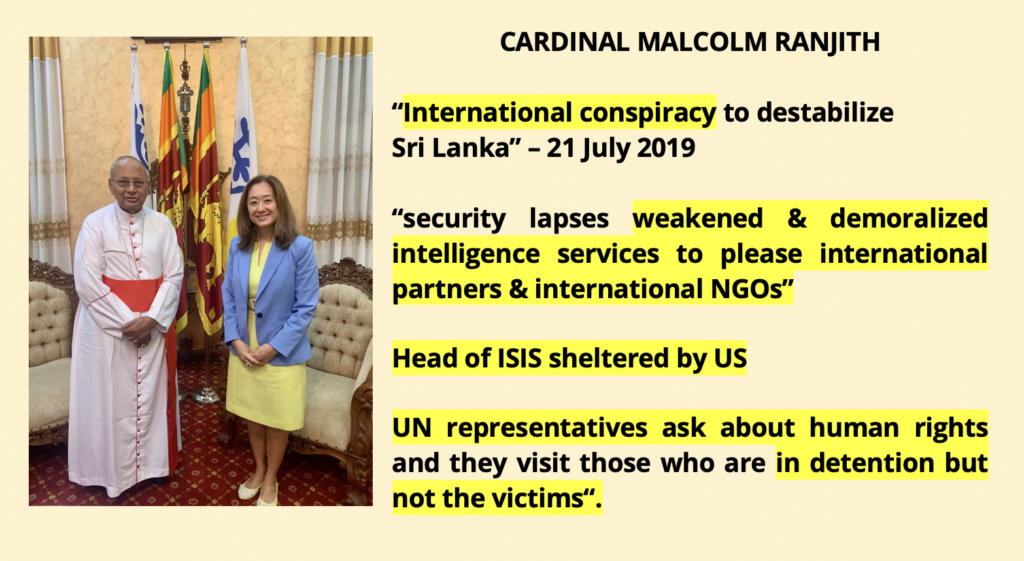 On 21 April 2019 9 suicide bombers committed suicide in 3 Churches, 3 hotels and 1 motel killing over 270 innocent people. While all of the suicide bombers are dead, we are yet to know whether they committed suicide on their own free will or whether a bigger plot was involved. ISIS claimed responsibility over a tape released honoring the dead. However, Cardinal Malcolm Ranjith on 21st July 2019 blamed Easter Sunday attack on an ‘international conspiracy’ to destabilize Sri Lanka while addressing a congregation at St. Sebastians Church, Katuwapitiya. Fast forward to 2020 & thereafter the Cardinal & his fellow Church companions are now singing a new song. Before we debate the new version, let us seek an explanation to the initial theory forwarded by Cardinal & question what made him change this the year after.

The Cardinal attributed the security lapse to ‘weakening & demoralizing the intelligence services to please international partners & international NGOs’. He declared that these ‘international conspirators” had used a few ‘misguided Muslim youth’ to carry out the attack.

Does this mean that the ‘international conspirators’ control ISIS as well?

The Cardinal’s allegation gets juicier — he goes on to quote from a report in the Sinhala language Divaina newspaper & says the head of the Islamic State group Abu Bakr Al-Baghdadi was being sheltered by the US.

This was a very serious allegation by the Cardinal. As a responsible religious head he cannot be accusing people or countries without facts or evidence.

Who were the international partners of the then yahapalana government?

Can Cardinal provide the answers?

The Cardinal went on to even attack the United Nations claiming it was only interested in the welfare of the suspects arrested in connection with the bombings & not the plight of the survivors.

Cardinal says UN representatives ask about human rights and they visit those who are in detention but not the victims“.

This is no different to the manner UNHRC was interested only in the fate of the LTTE and not the victims of LTTE.

Pope Francis had given the Cardinal over $90,000 in June to help the victims. Hopefully all victims have got their share.

In April 2021 two years after the Easter Sunday attacks, Cardinal says he blames the attack on ‘unnamed parties’ that used the perpetrators as pawns to ‘strengthen their political power’ – the Cardinal was referring to international forces & their links to Wahhabism.

Who are these international forces? How are they linked to Wahhabism.

At a press conference the Cardinal declared

“My comments have been misunderstood. I never said there is no Islamic extremism or expansionism in the country. I wasn’t referring to any political force. I was talking about Wahhabism and how it might be a tool used by certain powerful countries,”

Can the Cardinal tell us who these powerful countries using Wahhabism as a tool are?

The Cardinal goes on to add

“I wasn’t referring to any local political forces or leaders,”…“What we see in this (Easter Sunday attack) is not religious fanaticism or a love for a religion, but the attempts of certain forces to consolidate their position.”

Can the Cardinal elaborate on what these forces are trying to do to consolidate what position in Sri Lanka.

The Cardinal has been making numerous controversial statements since 21 April 2019. Deciphering these is not only tedious but confusing. Anyone who has kept track of these statements will be more than confused what the Cardinal is playing at. This is why it is time that not only Cardinal but all other clergy restrict their statements to only religious ones and stay away from politics or making political statements which includes the Cardinals fellow bishops as well.