Commonwealth Nations must seek apology and reparations from Britain 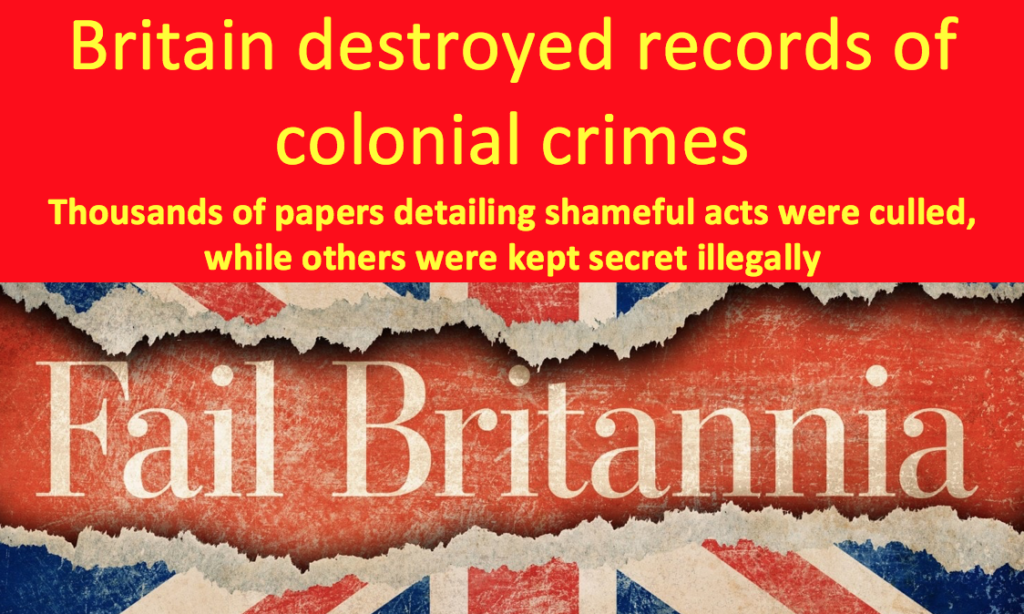 The architects of international laws, charters, treaties etc are those that first flouted them. No camaraderie should take place by former colonies until and unless Britain admits to its horrific crimes in all of the colonies. Other than Australia, Canada & New Zealand (forming white rule exterminating the indigenous) all other former colonies belong to the Third World, grappling to come out of their poverty and conflicts suffered as a result of colonial divide & rule policies. The 16 Commonwealth Values are good for paper when the main perpetrator is omitted from the dock.

How can Africa, Latin America, Asia & Asia Pacific forget that they were once slaves under British rule?

Britain that demands Truth & Reconciliation Commissions must first be asked to set up one that would look into every colonial crime committed.

How can Britain demand Accountability & Justice presently completely ignoring the historical injustices and grievances Britain has committed upon Commonwealth member states? Are these former nations bribed into forgiving and forgetting simply because Britain now accepts these former colonies as a ‘family’ of commonwealth nations. If forgive & forget can be applied to British atrocities why is Britain not applying this same forgive & forget for present crimes that which Britain is alleging on other nations?

Myanmar opted not to become a member of the Commonwealth at independence in 1948.

The Gambian President speaking at the UNGA in New York declared that African national would no longer be ‘hoodwinked’ into taking lectures from the same western nations that colonized and ‘plundered’ Africa in colonial times. “Today, after fighting for our freedom and liberating our continent, we are being prescribed a religion – democracy, human rights, and good governance by descendants of the same colonial powers”.

No democracy can erase the VALUES that existed prior to conquest in countries that Britain illegally occupied. Some of these countries had rich civilizations far before Britain was ever civilized. These civilizations had their legal, social value systems which though far different from the liberal West cannot be devalued as being inferior simply because these are not agreeable to western liberal norms. Values cannot be ONLY British Christian Values. Heritage cultures & values need to be accepted and that is true Democracy.

Every time Human Rights covenants, international laws come into practice they conveniently OMITS to apply the laws to the countries responsible for centuries of horrendous crimes upon nations they invaded. Human rights cannot have a time bar simply because the architects demand omission by commission.  The most horrific crimes in history have been committed during colonial rule – these cannot be even compared with the crimes taking place post 1945. Every former colony led their own peaceful lives before Western conquerors descended to ‘civilize’ them. No Commonwealth Charter can boast of inclusivity when it excludes investigating the crimes by the West upon the Brown, Black, Yellow races.

How can Britain promote International Peace & Security when it has taken part in the illegal invasion of Iraq, Afghanistan, Libya & now Syria? Are these not neo-colonial initiatives to grab resources that could not be drained during colonial rule? How many of today’s terrorists are armed, trained & financed by Britain & other powerful western countries? On what grounds is Britain competent to decide who a ‘dictator’ or who a ‘terrorist’ is?

The West loves to dabble with fancy names but for these to have any weight they must be sincere. Britain, Spain, Portugal, Netherlands, France, Belgium, Germany all arrived in Asia, Africa, Americas with the gun in one hand and the Bible in the other. They murdered with the gun & converted with the Bible. The plan was to Christianize nations & Christianized the natives. Islamic invasions did the exact same. The aim of both was to expand their horizons and increase their flocks.

Where do you really find freedom of expression? Where is free flow of information? The media is paid to write what the owners want written, journalists are paid employees with little freedom to write what they feel, politicians are often influenced by big corporates – the unethical methods adopted are unbelievable. Even whistleblowers are today targets for exposing wrongs, even inside the UN

Britain gave independence to countries it colonized. However, there is a legal question unanswered. Can an invader nation give ‘independence’ when it ruled illegally? Something for international lawyers to think about. Britain, that speaks of the integrity of the Legislature, Executive & Judiciary must explain why inspite of banning LTTE in 2001 for its acts of terror Britain has allowed LTTE international office to be used in London and watched UK Parliamentarians attend pro-LTTE events. LTTE fronts openly operate in the UK too.

All former colonies had their own legal systems. There were no courts, no lawyers, no prisons then. Today, international laws that have been created by former colonies & powerful Western countries have more courts, more laws, more lawyers, more prisons & prisoners as well as more crimes and violations too.

Britain as head of the Commonwealth cannot simply claim to uphold transparency & accountability without accounting for Britain’s own crimes. These are no small crimes either. There are only 22 countries that Britain did not occupy during colonial rule. All of the countries Britain rule, there was no good governance. Land was unfairly confiscated, people were murdered mercilessly, their villages were burnt to the ground, their livelihoods were destroyed, elephants were killed as a sport, they transported people to all corners of the world, they artificially divided territories and land & created new countries with new borders, families and tribes were split up & Britain pretends to be the human rights champion knowing it has committed all these crimes.

Before Britain invaded lands, the natives had their own economic systems, they even traded with foreign nations. Sri Lanka was known as the Granary of the East. We built ships for the Chinese Emperor, we had our own food and not one item of food needed to be imported. There was nothing called ‘poverty’. Poverty came as a result of the new capitalist system as a result of draining the former colonies of their resources & wealth and devising international trade laws to tax, loan systems to entrap nations to paying eternal interest and be in debt with no hope of coming out unless they bartered whatever they had left and even that would not suffice to pay off the loans/debt that former colonies are today saddled with.

Today, Britain speaks about protecting the environment, this is the same country that applied Scorched Earth Policy and destroyed crops and livelihoods of natives as a means of subjugating them. Not stopping there, in the recent past Britain has been part of bombing campaigns that have shown no remorse in bombing Yugoslavia, Iraq, Afghanistan, Libya, Syria joining US and NATO or selling bombs to countries that Britain knew was to bomb Yemen. Has Britain bothered about the devastation these bombs have caused to the environment and the physical conditions of the natives as well as to the US, UK & NATO soldiers sent to these bombed nations?

Most of the ancient civilizations gave a special place to the female. It was with the male dominated Christian society that role of women became sidelined. The world’s first female PM was from Sri Lanka in 1960. Women in Canada were regarded as ‘persons’ only in 1929 but all Canadian women could vote only in 1960.

The future lies in developing the younger generation equipped with sound values, education system that takes pride in the history & heritage of the country, the indigenous heroes and a system that helps natives identify the enemy conquerors & what they had done to the country. The West regularly speaks of coming to terms with the truth for any closure of the past, using this same logic, no nation can close its past without opening it up to reveal and release the truth and Britain cannot and should not stop these disclosures.

Britain is dutibound to help every state that it conquered, plundered and murdered but not taking on a similar role of the past conqueror. Britain can and should in no manner coerce countries as it did in the past. When Britain does, it only shows that Britain has not learnt lessons from the past & Britain’s hegemonic superior attitude still persists. The only difference is that Britain is shrouding its intent using a plethora of in vogue terms and phrases.

If any nation is today vulnerable it is because they had been raped by former colonial rulers. These western invaders divided & disturbed the equilibrium that existed. The natives simple lives were turned up-side down and replaced with a new system that they were forced to follow. Many are made to believe that Britain improved education & the educated. In reality, only a handful of elite were developed to function as Britain’s brown sahibs to whose hands power was vested with the confidence that these elite would help Britain continue to exert Western influence through them. The few locals who challenged this status quo were conveniently removed – Myanmar’s Aung San and Congo’s Patrice Lumumba are two classic examples.

How many ‘civil society’ organizations actually function placing country first instead of the objectives for which their foreign funding sources task of them? NGOs claim to be non-governmental, but how many of these are given foreign funding? How many have helped regime change, character assassination of national leaders etc? How ethical have their conduct been?

Why are member nations simply enjoying being accepted into the Commonwealth WITHOUT seeking justice for historical crimes Britain has committed? Nations of the Commonwealth are duty-bound to seek answers from Britain especially when Britain is not shy to point fingers at Commonwealth Member Nations.

Indian former diplomat is eloquently giving speeches & publishing books on Britain’s crimes in British India and none of his statistics are worth a penny if India does not lead the demand for accountability & reparations from Britain just like the Caribbean nations are now doing.