When population is increasing, not only is there scarcity of resources there is a hurry to grab resources & secure its ownership. Privatization is a means to advance this goal. Corporates are steadily transferring power to itself from political power. Politics has been corrupted to justify people to shift away from people’s representation via Parliamentary system. This is why politicians are seen sitting on corporate boards no sooner they retire/resign from office. This is the great “reset” being plotted where national assets & resources fall into private hands & they decide who gets what, when, how and at what price. People & Government are likely to be things of the past.

We again return to the days of haves & havenots – and the “kalu suddas” are the coolies tasked to carry out the task of hand over.

The suddas came to “civilize” the “uncivilized” of Asia & Africa, though they enjoyed greater & richer civilizational history. Most of their riches have been pilfered & plundered and history expunged.

The “civilizing” part is tasked to UN/INGOs & then locally outsourced to NGOs and Civil Society, think tanks, universities, paid journalists/media. The tools used are “responsibility to protect” “reconciliation” “multiculturalism” etc.

Increasing legislation for “discipline” is meant to keep dissenters in check and prevent people who begin to realize the gameplan from objecting – for this purpose mass surveillance and incarceration and curtailing of privacy as well as behind the screen filtering of mobile phones, internet searches and social media sites are deployed.

Media fell into the hands of billionaires who also funded think tanks & universities. The aim was to subjugate the masses with information controlling. 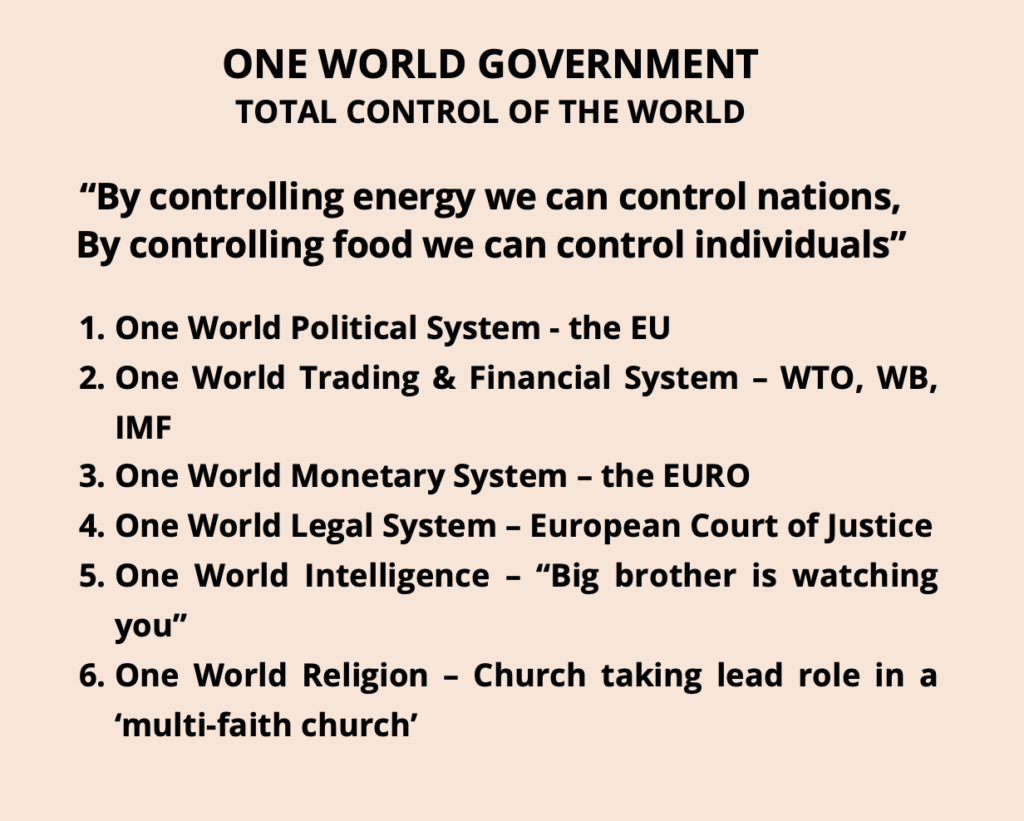 The one world government is part of a neo-liberal project. 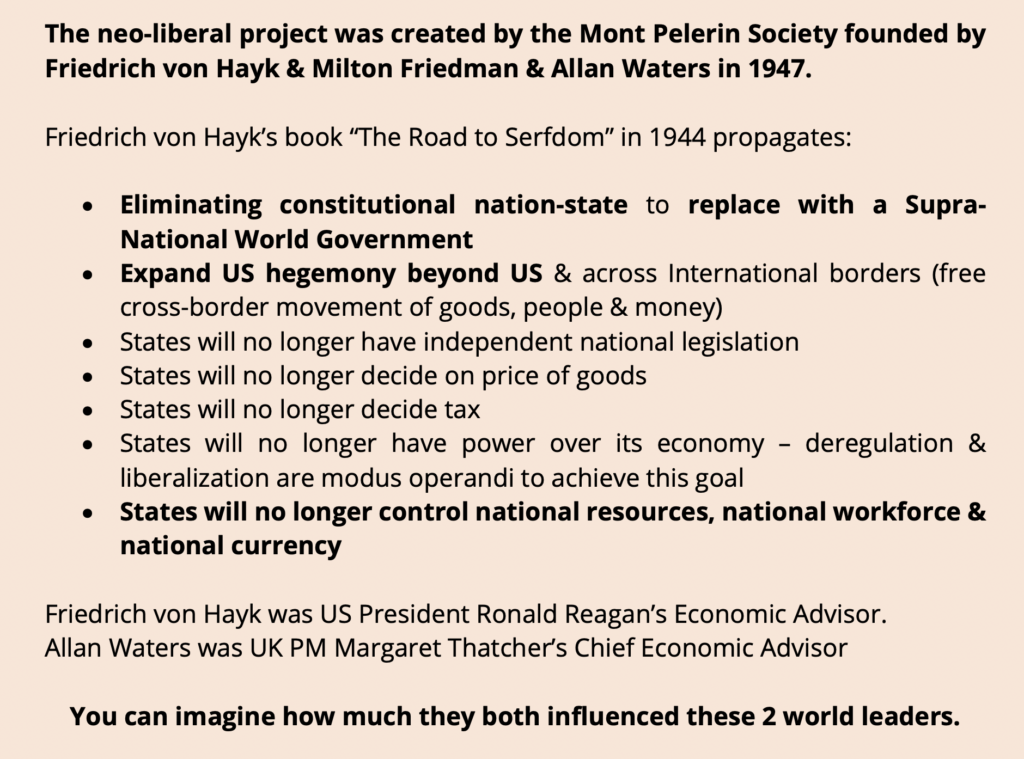 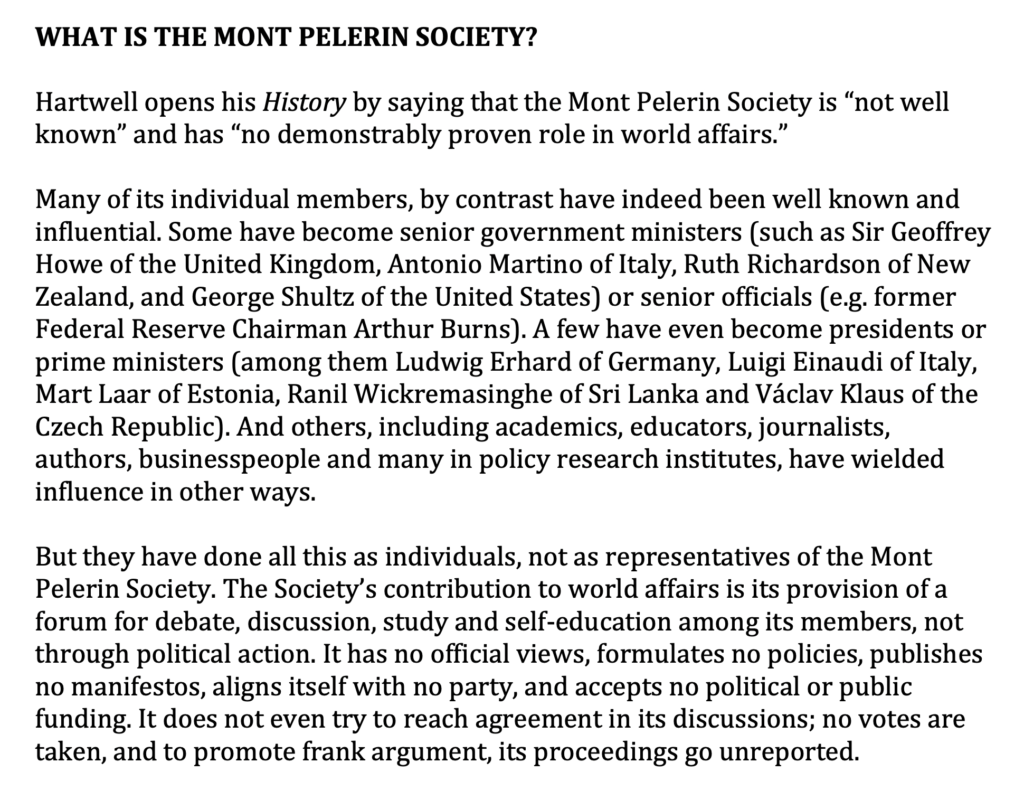 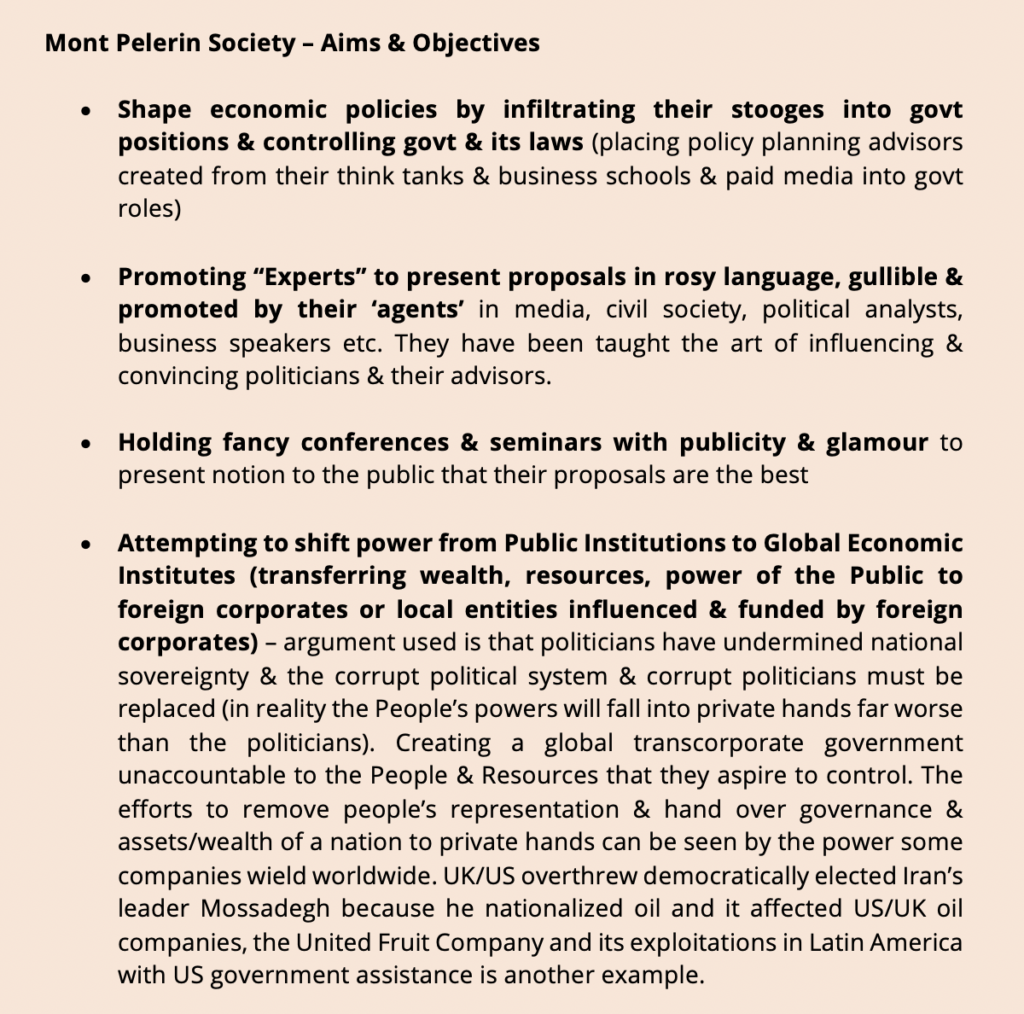 25 companies make more money than GDPs of these 25 countries

Companies are becoming richer than countries and taking ownership of resources in countries.

How are companies taking ownership of resources in countries?

A bevy of think tanks emerged all functioning as lobbyists for whatever government came to power. Majority of these merged with the Atlas Network.

Think tanks play a role similar to that of old Rotary, Freemasons, Opus Die, Knights of Malta in the Catholic world.

Atlas Network is part of US foreign policy & plays a key role in destabilizing & regime change. The Atlas Network comprises 450 foundations, NGOs and think tanks with an operating budget of some US $5 million https://www.counterpunch.org/2018/08/31/the-atlas-network-against-latin-america/

What is important to understand is that the Mont Pelerin Society sits as an umbrella over all these organizations.

Atlas Network & its associate think tanks & NGOs are discretely funded by US State Dept & National Endowment for Democracy. Their success include:

Atlas Network finances a variety of organizations that seek to influence the public and promote capitalist ideas.

How is Atlas Network connected to NED?

ADVOACATA Sri Lanka is a member of the Atlas Network which in turn is linked to the Mont Pelerin Society. Formed in 2016 at the Lakshman Kadiragamar Centre.

An interesting set of people make up its Board

Fredrik Erixon – Director of the European Centre for International Political Economy (ECIPE) think tank co-founded with Razeen Sally in 2006. Erixon was an Adviser to the British government.

Nishan de Mel – Verite Research agents for promoting MCC in Sri Lanka. He was Executive Director of the International Centre for Ethnic Studies and the Sri Lanka Foundation Institute.

Prof Suri Ratnapala – member of Mont Pelerin Society, appointed by PM Ranil himself a Mont Pelerin Member to advise the Steering Committee chaired by the PM drafting a new Constitution 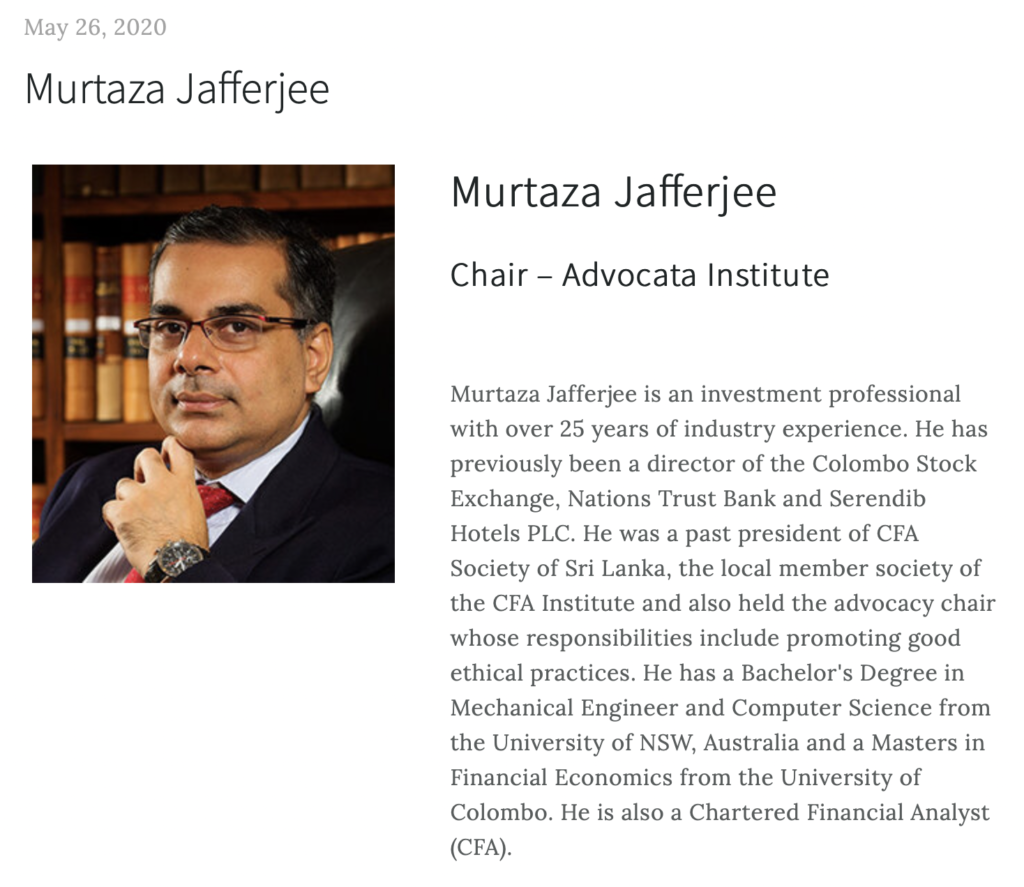 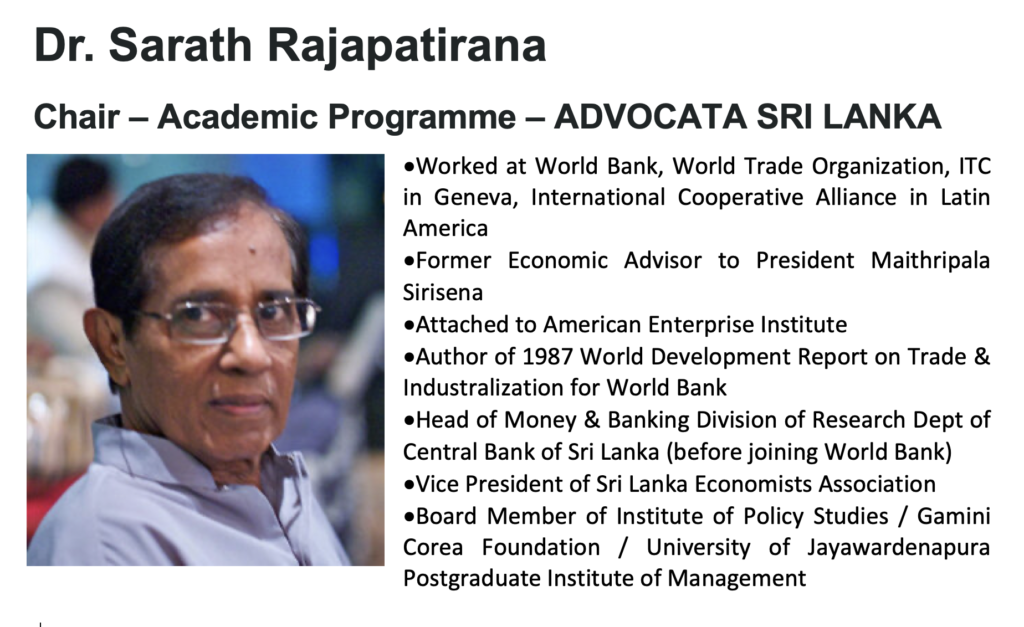 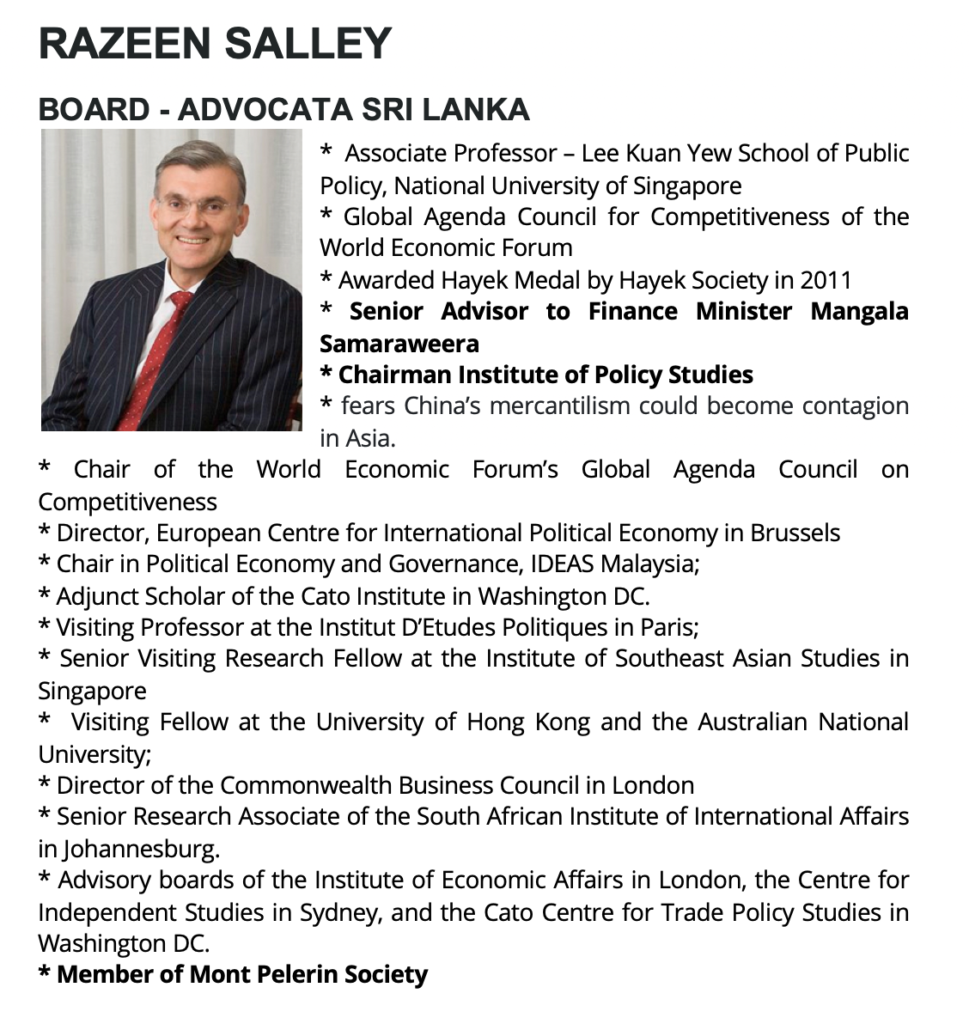 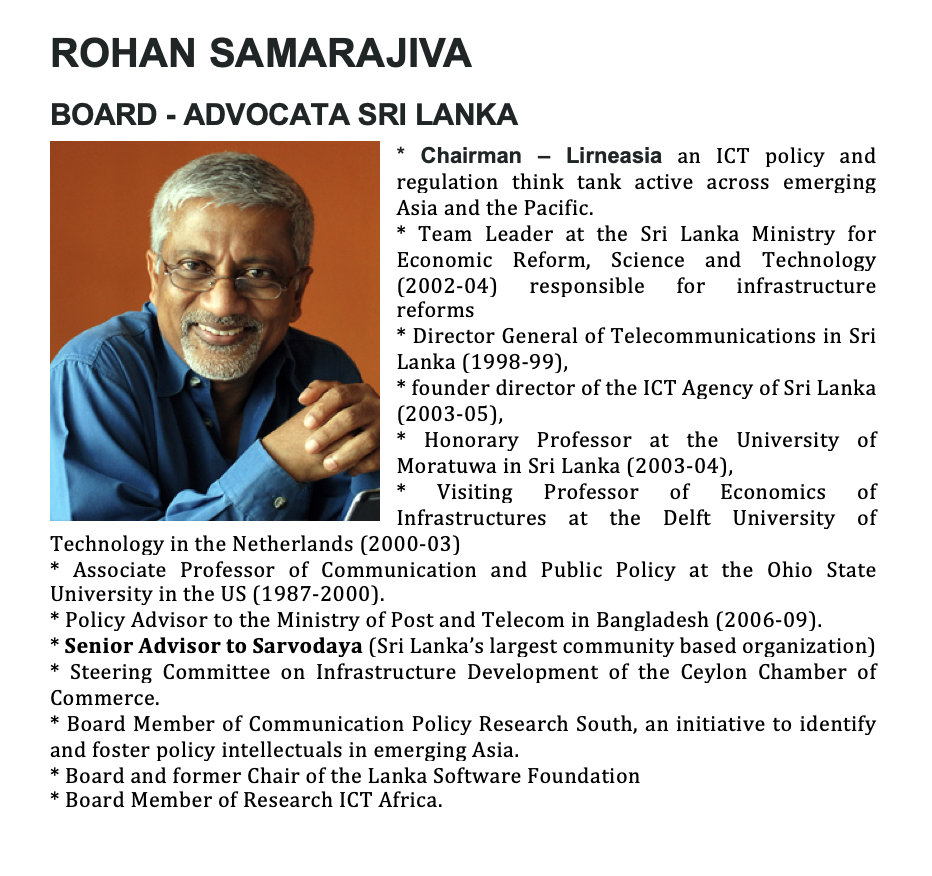 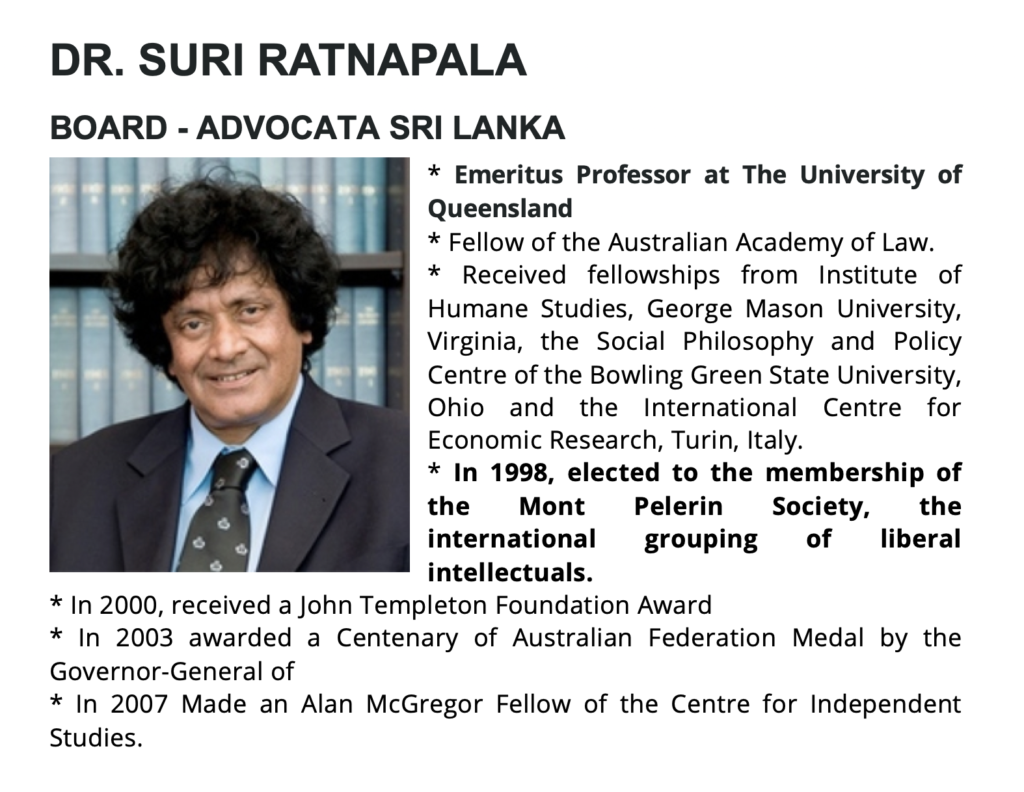 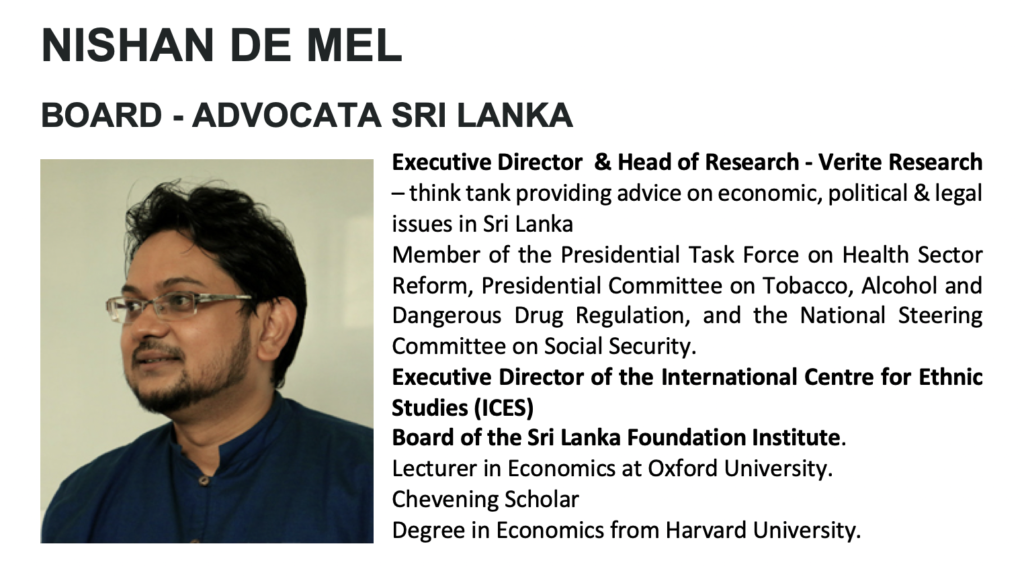 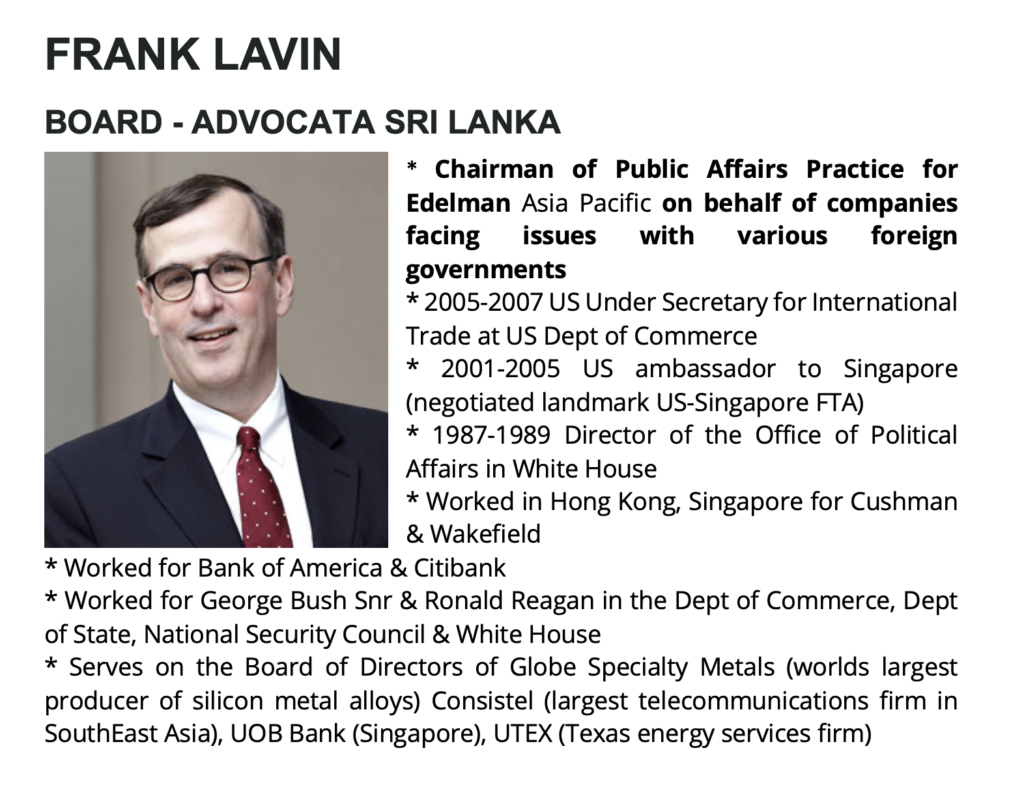 ADVOCATA was formed by Linda Whetstone.

Linda Whetstone was also the President of the Mont Pelerin Society & Board Member & Advisor of the Institute of Economic Affairs as well as Chairman of Atlas Network.

The Asia Liberty Forum was co-hosted by the Advocata Institute and Atlas Network in February 2019.

Is it independent of the GoSL but dependent on foreign think tanks & foreign funding?

Is IPS under influence of foreign-funded think tanks

What is the point in having a government think tank that is dependent on western governments & international funding? IPS is co-financed by the Dutch Govt & run by a Resident Coordinator from Dutch Institute for Social Studies.

DISS is funded by the Dutch Govt to train intellectuals & policy makers from former Dutch colonies.

How ‘independent’ is IPS’s OWN ‘Endowment Fund’ if Sri Lankan state does not know its funding sources?

How ‘autonomous’ is IPS, Sri Lanka’s supposed to be economic think tank if its donors are UK,, US Corporations, banks & equity funds (Hewlett Foundation/Bill and Melinda Gates Foundation), Netherlands, Canada and Norway?

They do not give money free without some agenda!

At this forum Ricardo Hausmann of the Harvard Centre was directly associated with the PM’s office, the BOI and Ministry of Development Strategy & International Trade. This same Harvard Teams’ did the land privatization Bill linked to the MCC Land take over.

Do we need economic experts if the only solution they give is to sell public assets and privatize all state owned enterprises?

The Chairman of IPS Razeen Sally who was Senior Advisor to Minister Mangala Samaraweera in 2017 was 24×7 advocating selling State enterprises and even suggested a deceitful strategy to handle country-wide opposition – first partially privatize state enterprise by putting such into a holding company (SL Airlines, Mihin Air, SLTB etc) and then gradually increase private sector stakes & work towards complete private ownership.

Sally’s proposition for public utilities (petroleum, water, electricity etc) was to replace Board members of the Public Utilities Commission with ‘independent directors’ obviously foreign ones or locals working for foreigners!

Dr. Sarath Rajapatirana, Economic Advisor to President Sirisena was also on board of the Institute of Policy Studies is a visiting scholar of American Enterprise Institute a neoliberal think tank and had been working for World Bank from 1975 to 1999.

M. Rafeek – Secretary to the Ministry of National Policies and Economic Affair (Ranil’s Ministry) is on the board of Institute of Policy Studies

Dr. Arvind Subramanian, the Chief Economic Adviser of the Government of India was keynote speaker at Sri Lanka Economic Summit 2017. Subramanian is also Senior Fellow at the Peterson Institute for International Economics a neoliberal US think tank.

Radhika Coomaraswamy, sister of Indrajit Coomaraswamy – is a member of Open Society Justice Initiative, Served as Chairperson of the Sri Lanka Human Rights Commission during Ranil Wickremasinghe’s Govt in 2003 and then served again under his government as Constitutional Council member in 2015.

Former Foreign Minister Samaraweera addressed the Carnegie Endowment for International Peace (US foreign affairs think tank) in February 2015, immediately after the regime change in January 2015. Ambassador Prasad Kariyawasam embroiled in controversy for his salary payment by US was also a speaker at the same think tank in September 2015.

Advocata was launched in May 2016 at the Lakshman Kadiragamar Institute together with a report “State of State Enterprises” (a report made before Advocata was created) showcasing 55 state-owned enterprises making major losses between 2006-2015 and recommended the Govt decide which to shut down, which to privatize and which the govt should continue to keep. If a report emerged before Advocata was created it should be no surprise when Advocata is quoted by Malik Samarawickrema promoting “far-reaching privatisation plans”

Advocata in November 2016 recommended that the Sri Lanka Budget 2017 reactivate 987,000 acres in the Land Reform Commission. They categorized schools, government ministries, military occupied buildings etc as ‘prime real estate’ and claimed they ‘outweighed their economic value’ and wanted them shifted! So the hue & cry to downsize the military is part of this larger objective! What excuse will they give to remove schools? Is the decision to remove 25,000 slums in Colombo City by 2020 part of this bigger objective? Will they soon remove residential housing too?

Prof. Hausmann Director of Harvard Centre & foreign experts from neoliberal think tanks, economists etc claim to be knowing what is good for Sri Lanka and they want Sri Lanka to privatize ocean-related activities, shipping, statutory bodies, liberalize free trade and investment, liberalize land sale, remove restrictions for foreign ownership including in freight forwarding and shipping and all these are being plugged into some rosy proposal known as Public-Private Partnership.

Have people thought what would happen if foreigners are given access to the entry and choke points into and out of Sri Lanka?

How far the State apparatus can keep to national policies against the plethora of people and proposals pushed with foreign funding insisting foreign governments do their bidding is an issue that citizens of Sri Lanka have yet to comprehend.

Every time a national program is kickstarted – foreign funding will come to either stop it or divert GoSL to another project that will subtly nullify that national project.

How can we face these challenges?