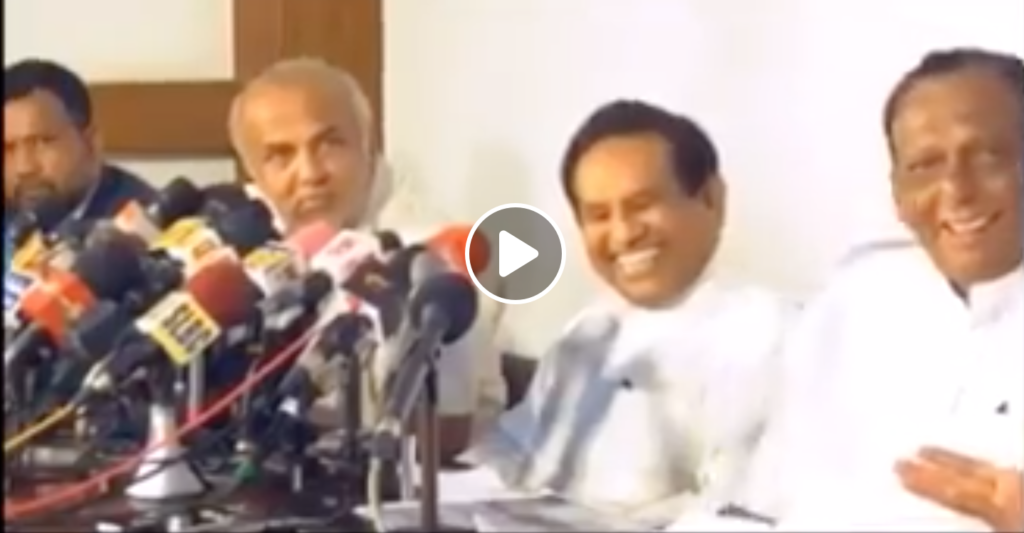 On 21st April 2019 multiple suicide attacks claimed the lives of over 300 innocent persons. These attacks took place despite 97 intel warnings from India the last coming hours before the first suicide bombing, giving venue, names of suicide bombers and even their phone numbers. No other country would have allowed the leaders elected to, protect the Nation & people, to simply walk scot free without being held to account. Simply, relegating responsibility to failures of the officials and intelligence units and washing off one’s own actions by appointing a dubious and controversial Parliamentary Select Committee is an affront to the common man but warrants history to record this debacle and the characters that either aided and abetted the criminals or simply watched the crime take place, both instances that denote nothing but criminal negligence.

Germany & Japan were defeated in World War 2 by the Allies. The Nuremberg Trials and the Tokyo War Crimes Tribunal did not have a single German or Japanese on the panel. But, in the aftermath of the Easter Sunday attacks ministers whose names were allegedly linked to the suicide bombers were not only seated at the press conference that saw yahapalana Ministers laugh off the heinous crime but the same Minister sat as a panel member at the Parliamentary Select Committee as well.

All of the people in places of power claim they did not know – the President says he was clueless, the PM says same and the envoy representing the world’s most powerful nation says her country too did not have prior knowledge of attacks. The then Army Commander told the Parliamentary Select committee he came to know about the incident only from social media! But India had given 97 warnings and by letters too.

When a government is created by gluing nefarious actors with questionable record of anti-national actions, it was like watching a volcano about to erupt. Incompetent officials put in place, the competent sidelined, the systems and units placed to protect the nation virtually neutralized or asked to lay low or closed down completely, systems opened to even foreigners to poke their noses was what was taking place post regime change in 2015.

The appeasing policy adopted and the attitude that the minorities ruled and the majority are insignificant did not help matters for it encouraged all sorts of destabilizing objectives to descend and commence their agendas across Sri Lanka. They did so knowing the leaders and their stooges were looking the other way and officials were also indirectly told to do the same. The crimes of omissions that took place from 2015 is testimony.

Special mention must be made of 37-year old Mohamed Razak Taslim of Mawanella who ended up shot by Zaharan’s men and today lies paralyzed. His crime was to put country before religion and his punishment resulted in being shot at. In December 2018 a number of Buddhist statues were getting vandalized. It was an obvious attempt to inflame communal tensions. Investigations and search for the 2 brothers linked to the vandalism led to another stash of 100kg explosives in a coconut grove in January 2019. This was no small number and it should have alerted authorities that something was brewing in the air. These suspicions should have been connected with the intel briefings sent by India. Taslim was shot in March 2019 while sleeping. Taslim had cried when he heard the news of Easter Sunday telling his wife ‘I told you something bad was going to happen’.

Another clue escaped attention. Zaharan’s brother injured himself while experimenting with explosives months before Easter Sunday and had been secretly brought to a private medical clinic in Colombo and was treated. No one reported the incident to the local police who would have investigated how he had injured his hand from explosives. This would certainly have led to Zaharan and his hideouts and perhaps even prevented the Easter Sunday attacks. Has this doctor been questioned for hiding Zaharan’s brother until his recovery? Aiding and abetting a terrorist is equal to taking part in terror.

Within 24hours the security services were able to nab over 50 suspects highlighting that the systems were well in place and only orders were lacking. Then came the shocking revelations of detonators, explosives, swords, even military uniforms found across the island even in mosques. A UNP Colombo Municipal Councilor was also arrested in possession of 46 swords, while another Deputy Major in Negombo was arrested in possession of a sword, dagger & 37 mobile phone batteries. As the country watched in shock Rs.1.2million was found under the bed of a not-so-well to do house in Weligama. Security forces also traced vehicles registered under the names of the suicide bombers/wives and relations. In Kalpitiya a man was arrested with 22 NICs of women (29Ap2019), while antoher was arrested with army uniforms in Lunugala with 18 passports. Quite a number of foreign Muslims were also arrested during search operations. In fact, on 2nd May media disclosed that Fathima Ilham the wife of spice owner Ibrahim’s suicide bomber son who also blew herself up in Dematagoda is the daughter of Alaludeen jewelers & Alahudeen is Bathurdeen’s uncle as well as Treasurer of ACMC. What is the status of these arrests?

The arrests were many but loopholes in law and lethargy of the system cannot prevent or deny justice to innocent people who became guinea pigs of bigger and powerful agendas – political or religious.

Yahapalana leaders were made to believe that the minorities helped them to power and whatever the minorities did they should not object or disagree or come in their way. Some Ministers including the yahapalana President have openly admitted this ‘we cannot anger the minorities’. So every ill happening was always ignored and when authorities and officials saw the body language and actions of their leaders, naturally they too thought it pointless bringing any national issue to them knowing what their reactions would be.

All this was made obvious with the co-sponsorship of the Geneva-Resolution in October 2015 that virtually sealed Sri Lanka’s fate and accepted Sri Lanka’s guilt in front of the world by a bunch of people who never sided with Sri Lanka’s Armed Forces and never provided even moral support to end LTTE.

In this scenario of the government that was ruling, the policies they were adopting and the general attitude towards protection of the country, should we be surprised when people directly linked with the suicide bombers and their families sit at the immediate post-Easter Sunday press conference and laugh at what happened on 21 April 2019?

Further rubbing salt to the wound they are even selected to be on the panel of the Parliamentary Select Committee to be grinning away at the cross examination of officials.

Can we expect justice from yahapalana for the crime that took place purely because of negligence?

Together these controversial figures found salvation in wiping all blame from their own hands and passing it off to the officials and intelligence units who were made to sit and disclose the most confidential of state secrets and relayed publicly to all and sundry. These brave officials answered as best as they could and their magnanimity was such that they did not pass blame like their leaders and accepted blame for what their leaders should have been responsible for. If a Committee passes blame to officials and holds them responsible absolving leaders of all blame, do we need to elect them, do we need to spend millions on maintaining them and their families. We can allocate that money to the officials!

It is disgusting to see the yahapalana President and Prime Minister behave as if they had no role to play in the debacle that took place. The manner that they can laugh off their role and see fit to pass blame is incomprehensive. Both have got away – one with a 800m house and the other unashamedly continuing to fool the masses still. Shameless they want to both continue in politics.

What took place or what led to Easter Sunday is a culmination of bad policies based on horse trading and bartering for one’s personal gain.