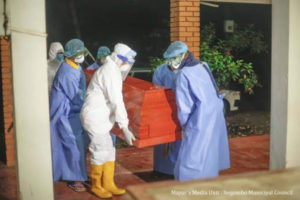 A pandemic engulfs the globe with deaths nearing 200,000 and millions of confirmed cases documented. So far no one, not even the World Health Organization can firmly say what caused the virus, how the virus is spreading or what the cure for the virus is. Everyone is simply experimenting and making cautionary statements that often contradict previous statements made. There is no single golden rule and there is no universal solution or cure to address covid-19 and each country are on their own experimenting and rolling out best practices that have worked for them. In such a scenario, Sri Lanka opted to take the worst-case scenario to determine how it would expose covid-19 dead. It was not a decision based in favor of any community or against any community. Sadly, those that played the community-grievance card both locally & internationally has done great injustice to the Nation, the Government and to the Rest of the People of Sri Lanka. The damage as a result has resulted in Sri Lanka’s covid-19 success stories getting drowned in media releases claiming Sri Lanka is now targeting the Muslim minority. This damage caused by irresponsible & opportunistic individuals of one community is difficult to undo and will be forever unfairly flagged against Sri Lanka in the future.

Countries that boasted of superior health care systems, technology & equipment have found themselves in a precarious situation where hospitals cannot deal with the influx of patients, lack of health insurance deny hospitalization or medical attention, hospitals are without ventilators, face masks and other surgical equipment, confounding the situation, people are refusing to listen to their governments and fatalities among doctors and nurses are increasing further burdening the situation. The West accounts for close to 100,000 covid-19 deaths.

The WHO has been regularly issuing statements and guidelines which have been changing with each day some even contradicting original statements. But people have not made issue realizing that WHO too are also trying to deal with the situation. WHO guidelines issued to countries were meant to be benchmarks for countries to follow and around which they could devise their own decisions. Nowhere does WHO say it is mandatory to follow to the word what WHO gives as guidelines.

Sri Lanka too like all other countries naturally did not realize the magnitude of the danger of covid-19 and so initial decisions naturally had to be changed with time. It was in such a scenario considering that Sri Lanka too could see a rise in deaths that the decision to cremate all covid-19 dead was taken. It was a decision that was taken considering the nature of covid-19 dead un-embalmed decomposed fluids contaminating the ground water/soil and affecting the lives of the living. It was a decision that all others for a moment did not think was an affront to the dead or something declared against their community except for one community whose opportunistic leaders and wannabe politicians thought opportune to use as a form of bargaining tool to rouse their community against the government and show their might internationally, given the power of their 1.8billion number!

It was hurtful to the other communities who though realizing the opportunism in the demands did not wish to add to the government’s worries by making demands themselves on behalf of their communities.

Let us all realize that close to 200,000 people have died all over the world. They all belong to families who care for them and who feel for them and who are sad that their loved ones have suddenly died to an unknown virus. Many of the dead were as young as 13 some as old as 80. But whatever the age, they were people who are no less important. Inspite of WHO guidelines for the dead there is no country that is following 100% what the WHO has recommended.

Even in countries where a community is the majority diverse practices are being followed and applied. Though ritual practice mandates the dead to be buried in 24hours some of the countries where this community is in the majority have kept bodies in the morgue for over 2 weeks, some villagers are refusing to allow their town cemetery to be used to bury covid-19 dead, some governments are not even allowing washing or dressing the body or even taking the dead body to the home or place of religious worship. So none of the countries where this community is in the majority are practicing to the word any of the rituals they practice. Most of these countries are even hiding covid-19 deaths by not disclosing the cause of death. In so duplicitously burying covid-19 dead in town cemeteries only time will show the damage to these towns and those innocents who may contract the virus when rains and other natural disasters occur.

How fair was it to only project globally the notion that one particular community was purposely being denied their funeral ritual? This is hurtful to the other communities who have also lost their loved ones and who have had to sacrifice funeral rituals to their dead by putting the interest of the living before their dead family member. These families must no doubt be saddened that they could not give their dead family member a fitting farewell but they have come to terms that their actions have been in the best interest of the Country and the living. Why is it difficult for this community to think this way? Or rather why do leaders of this community always think that they can play the community card and get their way?

In Sri Lanka we saw 7 deaths. 3 out of the 7 were of the same community while 2 deaths were Buddhist and 2 deaths were Catholic. Catholics generally bury their dead. Catholics believe soul lives after death depending on the righteous life led (Heave, Hell or Purgatory) Funerals are generally held in Church, led by a Priest who delivers sermon, there is a funeral mass, procession, sprinkling of Holy Water, songs & prayer, readings from Bible, there is a dress code, Priest officially commits the body to the earth and traditionally Catholic funerals are not held on Sundays. None of these rituals could be performed on the 2 covid-19 dead but no one from that community complained or commenced an international media campaign against Sri Lanka.

2 Buddhists died of covid-19. For Buddhists death is a transition from one life to the next on a journey to Nirvana. Death is a reminder of impermanence of life. The body is brought home, family & friends visit to pay homage. Cremation or burial is a personal choice. On the day of the funeral Buddhist theros arrive and are offered Pansakula (robes)/mataka vastra Pooja (offering cloth on behalf of the deceased), merit is transferred (Idam me natinam hotu) followed by anumodana (thanksgiving) then there is the pouring the water of dedication. The Pansakula rite has been followed since Buddha’s time and is an integral part of a Buddhist funeral.

None of these rituals coming down from over 2500 years could be performed on the 2 covid-19 dead victims but Buddhists did not complain or carry out an international campaign against the government.

Imagine how these families would have felt if the Government gave in to the demands of one community totally disregarding the rituals of the other communities that they compromised because it was a necessity!

However, since January, deaths have occurred of all communities and apart from the 7 covid-19 dead, all of the families have either cremated or buried their dead following all rituals. Nevertheless, with curfew and lockdowns and requirement for social distancing even ordinary rituals have had to be amended to suit the situation. As such an ordinary funeral has meant that it is not possible for people to travel to the funeral home to pay last respects – it is only the immediate family who have had to run through the funeral rituals among themselves. So everyone has had to adjust their lives. But the notion presented to the whole world is that Sri Lanka is purposely targeting one community – which is totally wrong and totally unfair by the other communities who are accepting the decisions of the Government and not trying to make things difficult for the government.

Relevant to this discussion is the example from India. India has a central government and state governments. The Centre issues a general circular to all State Governments and the State Governments in turn issue directives based on what they deem is appropriate for the state. 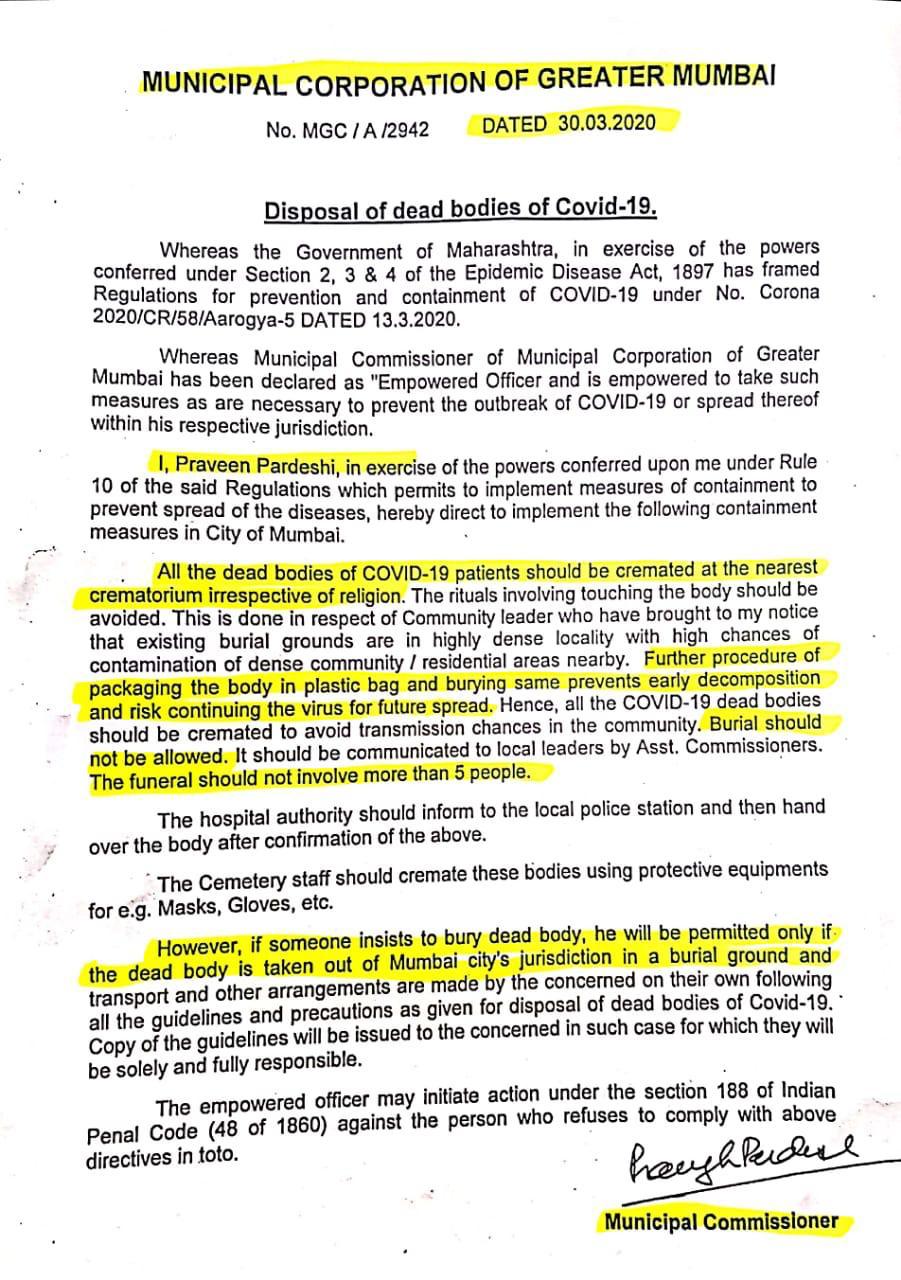 The Mumbai Corporation of Greater Mumbai issued a circular on 30 March 2020 declaring that covid-19 dead bodies were to be cremated.

It also cites the penal code for action to be taken against anyone going against order. 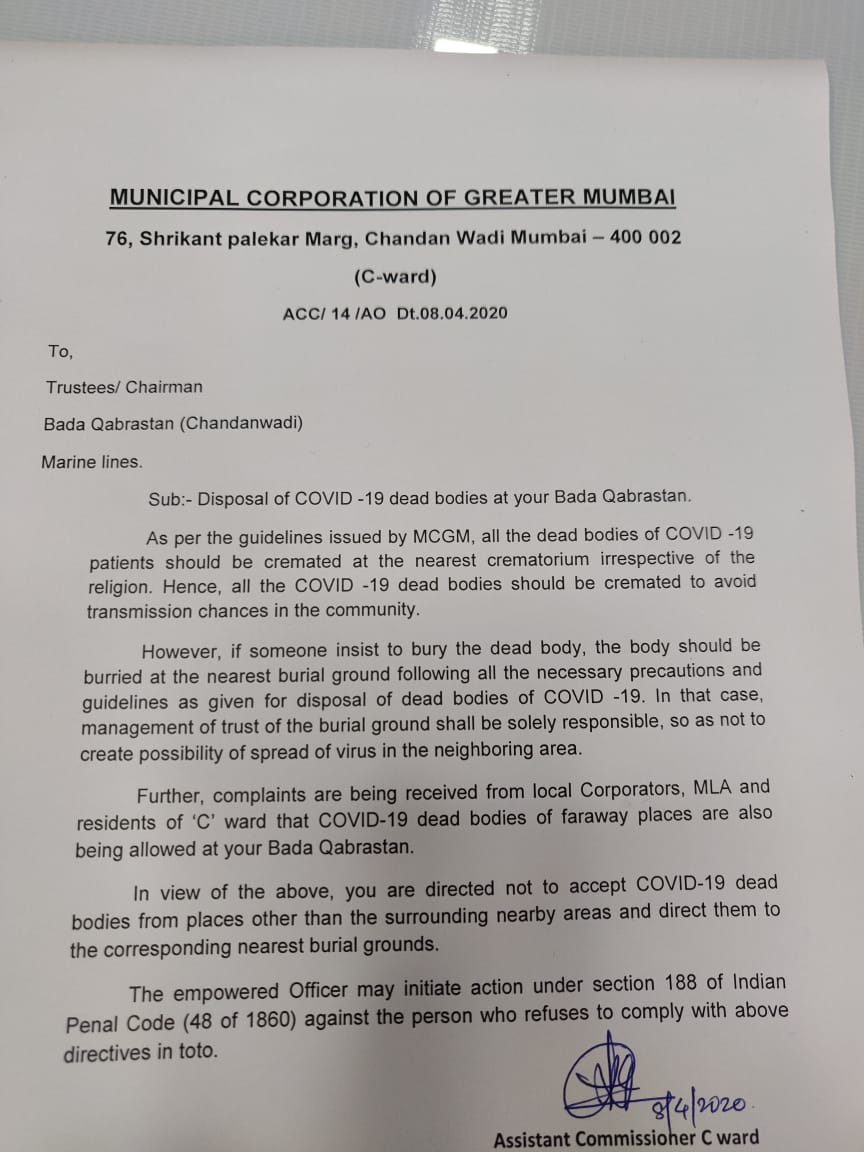 The other letter attached is one sent by the Municipal Corporation of Greater Mumbai to the Trustees of a Muslim cemetery while reminding of the circular of the State, clearly states that the Trustees must take full responsibility for spread of virus to neighborhood. The MCGM also informing Trustees of complaints received regarding covid-19 bodies from other neighborhoods being brought to site and informs that they shall not accept any such covid-19 dead bodies for burial outside of their neighborhood and reminds the Trustees of the penal code action to be applied if circular is flouted.

How come these circulars which were applicable to 13million Muslims from the Maharashtra state did not result in the uproar that Sri Lanka witnessed? How come the level of lobbying that continues to take place even now does not take place in India? How come the international media are not drawing attention to these State circulars? Sri Lanka has only had 3 covid-19 dead from the Muslim community but the notion projected to the world is that all Muslims are being cremated. A version that is false and fabricated and for which the Muslim community in particular the notorious set of politicians and some wannabe future Parliamentarians are responsible. It is natural that when facts are brought forward their immediate reaction is to subtly re-divert attention speaking about cooperating and supporting the government while beneath the surface lobbying and other tactics are pursued. They should not think the general public is ignorant to these chameleon tactics.

At this juncture, it is true that some unfortunate people have perished from covid-19 and whatever race or religion they belong to, all of them could not get the farewell they deserve but that situation is relevant for all of the deceased and not just one community and this is what this particular community needs to accept and realize. It is not that they don’t it is just that their leaders want to always fish in troubled waters trying to gain some publicity for themselves. We have seen in the countries where the strictest forms of religion is practiced the natives of these villagers would not even allow a dead covid-19 corpse to be brought to their village for burial not even when the victim was a doctor who treated them because they realized that the chances of the entire village, the children and elders getting it was far too important to ignore.

Covid-19 is teaching the people many lessons – let this be one, not to think of one’s community only.