Did US use Ukraine-Russia war to weaken Europe? 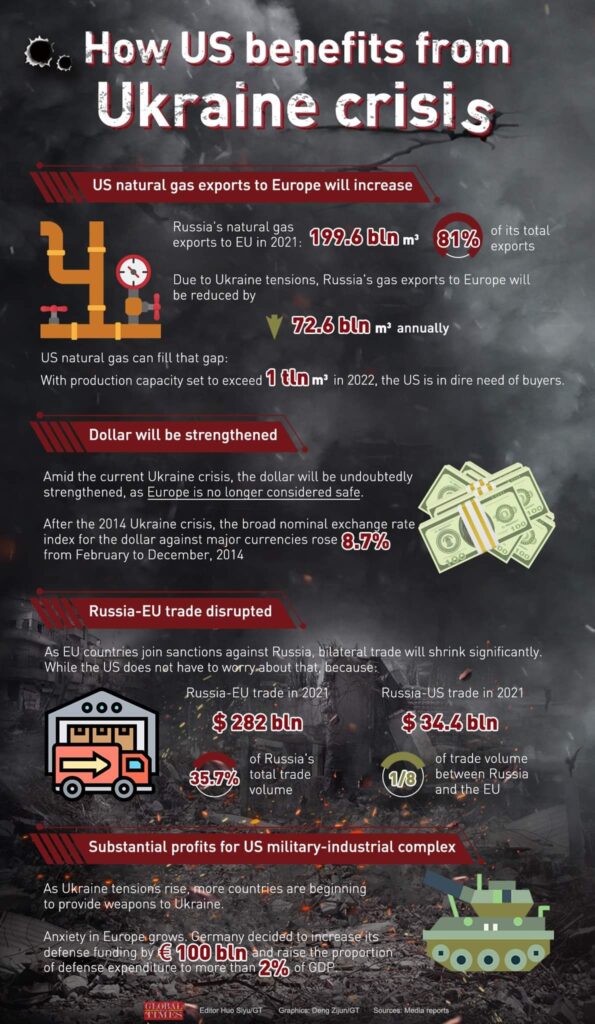 Was US using Ukraine for a bigger goal than to draw Russia into a proxy war? Did US use the Ukraine war to destabilize & weaken EU? Shouldn’t EU leaders & Europeans wake up to this unpalatable reality. While many Europeans are asking why America does not fight its own wars & why European leaders are choosing to fight America’s war at the expense of their own, no one appears to be providing the answers. US did the same to Europe during the War on Terror and Arab Spring. How many non-Europeans & even terrorists flooded to Europe which included terrorists & given safe haven in European countries where they have created sleeper cells. The present predicament finds Europeans facing difficult economic times and a cold winter all resulting in financially destabilizing Europe and reducing their clout globally. After all Victoria Nuland did say “F…. the EU”.

How many Ukrainians have been given refugee status in US? 5million Ukraine refugees are, being sheltered in countries across Europe. Initially it was welcome, now signs of strain are showing on account of social assistance allocations footed by Europeans for a war they did not want.

Experts say the cost is €40bn for Europe. Ukraine war came just after Europe was preparing to recover from the pandemic. Picking up investments came to a virtual halt. If the pandemic affected jobs and employment, the Ukraine war has worsened the situation & winter without gas/energy is likely to make matters worse. The spoils of war spilling on Europe is far more than the impact to America or Americans. Economic output has reduced & prices have increased. Life is not so rosy for Europeans.

Ukraine refugees can only return if Ukraine is back on its feet & that weight has also fallen on Europe – who will foot the bills for infrastructure destroyed in Ukraine for a war Europeans did not ask for? The post-war scenario looks far worse than waging war. Russia too will have to face many ills as will Americans who anyway suffer as a result of all of America’s illegal proxy wars since independence. So who is actually benefitting from these wars?

Ukraine, Europe and even Russia have to weather far more than they have taken stock off in walking into a war without thinking of the repercussions.

Industrial & agricultural production output is impacted, exports, cargo handling are affected, unemployment is surging, automotive industry is suffering from supply disruptions, energy crisis will mean a severe winter as a result of sanctions on Russia. Europe sanctioned Russia on request of US but will US keep Europe warm in the winter?

Sanctions by EU against Russia for invading Ukraine on 21 February 2022 is a continuance on some sanctions placed after Russia annexed Crimea in 2014.

EU has sanctioned Belarus for its siding with Russia.

Sanctioning Russia has impacted Russia’s trade with EU. Bans on import & exports to Russia means the ban invariably impacts EU. EU can no longer sell products to Russia & Russia cannot export to EU or import from EU. These items include health, pharma, food, agriculture. EU cannot import crude oil, refined petroleum products, coal, gold, steel, iron, wood, seafood or liquor from Russia. Sanctioning 90% of Russia’s oil imports to Europe means adverse impact to EU as well. EU has also refused access to EU airports for Russian carriers & banned them flying over EU airspace – this impacts EU travelers as well. If three-quarters of Russia’s commercial air fleet are produced in EU, US & Canada, their profits will get affected. How has closure of EU ports to Russia’s entire merchant fleet of over 2800 vessels cost the EU? As of February 2022 Russia’s international reserves of $643b had more than half frozen.

Did Europe take stock of how vulnerable it was making itself by piggy-backing US’s war against Russia? Europe is already feeling the pinch from sanctions, trade disruptions, inflation and impact on its energy security. Had Europe’s advisors looked at this scenario.

The EU is Russia’s main trading partner. Russia is the largest export market for Latvia & 2nd largest for Lithuania. Russia wood makes up half of all Finish wood imports which is 20% of industry production & 15% of industry employment. Europe is also dependent on Russia & Belarus for fertilizers. EU relies heavily on Russian palladium (precious metal in engine exhausts to reduce emissions) Shortages has affected German & Italian automotive industry.

US will do to India exactly what it has done to Europe. It is good for Delhi to wake up to this ground reality. If US can destabilize its ‘friends’ in Europe using a proxy-Ukraine-Russia war, what is India to US?

US has not only financially weakened Europe reducing its clout. US has benefitted by Ukraine-Russia war. US natural gas exports to Europe has increased. Euro has weakened but the US dollar has strengthened. US military-industrial industry is booming from war sales & arms purchases. With EU-Russia trade strained EU is now made dependent on US.

EU has fallen for US trap lock, stock & barrel.