Dr. Krishan Ramasundaram says “What the Sri Lanka Army is doing for the Tamils the TNA is not doing” 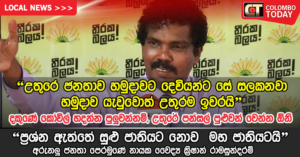 Dr. Krishan Ramasundaram from the Arunalu People’s Alliance should shock many people in particular those who are holding supposed to be unbiased & non-partisan positions for their lies too are exposed by the statements made by this doctor who says the Tamil people in the North are happy with the Army, they treat the Army as Gods & that if the Army are removed from the North, it would be the end of the North. This is not the version that the supposed to be unbiased NGO heads are projecting? Why are they lying & for what reasons? The International Community & the UN are believing these lies & helping create further chaos by doing so going so far as to even change the constitution. From what this doctor says there is absolutely no need for a new constitution & there is no need for any special programs on reconciliation because there is nothing to reconcile as the people have no issues. Only the politicians, NGOs, international community & their agendas are dividing us.

The Sri Lanka Army are helping Tamils in many ways – helping them find jobs, put up tube wells, help start farming, giving bicycles, supplying drinking water, helping their education, helping kovils. In short, he says that every aspect that the Tamil politicians should be doing the Sri Lanka Armed Forces are doing.

Dr. Ramasundaram says that when people are asked about the Sri Lankan Army, they say that the army are good, that they help them in many ways. The TNA however, doesn’t like the Tamils giving the army a good character certificate! The TNA is demanding the Army to be removed because they don’t want the Tamil people & the Sri Lankan Army to get close because then the shortcomings of the TNA get highlighted. That is why the TNA is continuously demanding the removal of the army using the excuse of giving back lands etc. The army are even giving coconut plants for people to plant.

Dr. Ramasundaram especially thanked the military citing that the Tamil people did not have any freedoms or rights before the conflict concluded in 2009. He confirms that over 5000 Tamils have been recruited to the civil defense forces and are employed in various technical areas earning over Rs.50,000 per month.

Dr. Ramasundaram makes a very poignant & clear statement that if the Armed Forces are removed from the North, it means the end of the North.

What the people of the North need are basic needs – education, health, economy are declining. In former times the North produced doctors & engineers, now that is not happening. Before anything people need to have food to eat. Refugees were asked to return promising to give them homes, employment etc but nothing of the sort has happened and these people have to go begging to their relations homes.

For the role that the Sri Lankan Army are doing that the TNA & other politicians are not doing, we have to be grateful to them. It is because of this yeomen service that they cannot be removed from the North.

Dr. Ramasundaram says that he has asked the Tamil people what their personal views are about the army & they have all said that the Sri Lankan Armed Forces are like Gods to them! There are some Tamil families who keep photos of the Army & daily thank them for helping their lives. This is the truth that everyone has to accept.

Not one Sinhala leader has emerged from the North but there are plenty of Tamil politicians emerging from the South. Even Moneragala has produced a Tamil politician with just a handful of votes. The Mayor was a Tamil doctor. If the Sinhalese were racist the Tamils wont be holding high positions!

Not one Sinhalese doctor has been produced from Jaffna university but there are enough of Tamil doctors passing out from the Southern universities. All the leading businessmen in Sri Lanka are also Tamil. The past & present Governors of the Central Bank are Tamil. The Opposition Leader is Tamil (Sambanthan), Sri Pavan became the Chief Justice, Chief Minister Wigneswaran is shouting for no reason when his own son is married to MP Vasudeva Nanayakkara’s daughter. Wigneswaran is enjoying Sinhalese meals with them & then shouting racism against Sinhalese when he comes to the North.

The TNA says only the Tamils & minorities have problems but in reality the Sinhalese also have problems. Tamils can live & work anywhere but Sinhalese can’t.

In short, we have no Tamil leaders who care about the welfare of the Tamils. After TNA came into the political scene they have ruined relations & have not provided for Tamils. TNA is losing popularity. People are watching & with more alternative groups emerging the TNA vote base is slowly reducing.

Dr. Ramasundaran gave the example of Malaysia to say that if a person could not speak Malay language, he could not even wash the toilets. However, we do not have that problem in Sri Lanka.

Dr. Ramasundaram clearly stated that the TNA does not wish to bring harmony & is eternally drumming the racist card to remain in politics & that there are some Sinhalese parties also helping them the same that supported Vijayakala.

Speaking in English Dr. Ramasundaram highlighted that Rs.800m had been allocated to the Northern Provincial Council & TNA had done nothing for the welfare of the Tamil people. He goes on to say that though the Indian Government has built 50,000 houses these have yet to be handed over but it is not being handed over because there is no water facility, no toilet facility & no water.
He says that Buddhism has been in the North for a very long time & that the Sinhalese have every right to live in the North if Tamils are buying land, building homes & kovils & living in the South.

From these shocking truths the government must take a step back & realize that they cannot take the country into another era of turmoil by bringing drastic changes when obviously the reasons given to make those changes are completely false.

The allegations against the army are false – demanding their removal, the Tamil people want the army
That the TNA is representative of the Tamils is false – the election results & decreasing popularity of the TNA is proof.
That the Tamils are discriminated is also false – Dr. Ramasundaram clearly points out these facts

These are the very arguments that are being thrown to justify changing the constitution but to see these excuses are all lies & falsehoods – so who have been spreading them? The politicians, the local NGO heads, segments of the international community for their own agendas… in short external & anti-national factors. Therefore the Tamils & Sinhalese must now join to say – WE DO NOT WANT ANY NEW CONSTITUTION. WE DON’T NEED ANY NEW EFFORTS AT RECONCILIATION BECAUSE WE HAVE NEVER BEEN IN CONFLICT. Sri Lanka suffered a terrorist conflict not an ethnic conflict. Deal with the terrorists & remove them from disturbing the peace. If any reconciliation is needed take all these mischief makers who have been spreading lies & teach them compassion & help them disassociate themselves from their evil ways