Geopolitical implications of US Govt-MCC that Sri Lanka cannot overlook 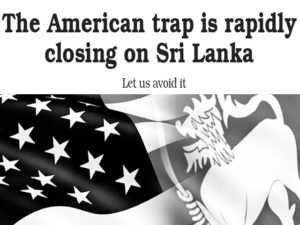 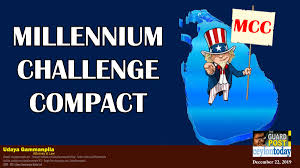 The shift of balance from West to East is nothing anyone can deny except that it also means the challenges for the East are all the more overwhelming unless policy formulators derive ways and means to handle, mitigate and foresee the threats their nations will experience both directly & indirectly in numerous forms & formats.  The West is unlikely to watch as its economies weaken and would be using an array of soft power tools (cultural, economic, politics) as well as military and technology to rebalance its position. It is in this context that we must view MCC and its interlinked agreements ACSA and SOFA as well as US key strategic partners in Asia – India & Japan. Sri Lankan policy makers must not be ignorant of the bigger picture in all their diplomatic-economic-cultural dealings with the US/West/India & Japan including Australia. Sri Lanka’s genuine engagements with these nations cannot overlook the dangers that the overall partnerships can deliver to Sri Lanka vis a vis their bigger alliances and powerful strategic interests upon which Sri Lanka is only worth a pedestal and prop. How Sri Lanka balances these threats against its own development goals is one which will test the abilities and capabilities of Sri Lanka’s policy makers and advisors.

Why US is pivoting to Asia?

US Pivot to Asia is both a military and a diplomatic pivot launched in 2011 under Obama administration by Secretary Hillary Clinton. US Pivot to Asia will transfer US presence from Atlantic to the Pacific whereby 60% of US Navy will become based in the Pacific Ocean (US aircraft carrier, 7 destroyers, 10 littoral combat ships, 2 submarines & spy planes)

Global economic nerve centre is shifting to Asia with 20 emerging countries which can impact on global economy & politics. Asia is home to key trade lanes, mineral resources, half the world’s commercial shipping passes through Indo-Pacific region. Strait of Malacca is one of the most important shipping lanes and strategic chokepoints as it links Indian & Pacific Oceans and transports 25% of trade goods & oil & liquefield natural gas flows via sea. 80% of Japanese and 39% of Chinese oil imports pass through Indian Ocean from the Middle East. There is also untapped oil reserves and 60% of the global population live in Asia. In 2018, almost 40 percent of U.S. trade in goods was with Asia. Asia is home to nine of the world’s 10 busiest seaports and 60 percent of global maritime traffic. Seven of the world’s 10 largest standing armies are in Asia, including those of China, India, North and South Korea, Pakistan, Russia, and Vietnam. There is no equivalent of NATO in Asia – efforts to create one combining Five Power Defense Arrangement (United Kingdom, Australia, New Zealand, Malaysia, and Singapore) via Southeast Asia Treaty Organization (SEATO) failed.

Role of Japan with US

Japan is a key alliance partner of US.

50,000 US troops in Japan & over 10,000 US marines are stationed in Japan under status of forces agreement. Treaty of Mutual Cooperation and Security between the United States and Japan in 1951 cement US-Japan ties. The 1960 US-Japan agreement granted US right to establish bases in Japan enabling US first foothold in Asia. Japan is responsible for providing host-nation support to the United States—the land, labor, and utilities for stationing U.S. forces throughout the country—the cost of which ranges from $1.7 billion to $2.1 billion per year, according to a 2019 report [PDF] by the Congressional Research Service. How much will Sri Lanka have to pay for compromising its sovereignty via MCC ACSA SOFA?

Role of India with US

India is America’s centerpiece of US pivot to Asia as seen by the increasing strategic deals & defense cooperation development between the 2 nations. US pivot to Asia and India’s ‘Look East’ policy are intrinsically tied. Notably, Indo-US closeness increased following India-assisted regime change in Sri Lanka in 2015. Strategic partnerships were forged, US provided billions worth military equipment to India, logistics, information-sharing and intelligence-sharing agreements have been signed (Logistics Exchange Memorandum of Agreement (LEMOA). India was designated a “major defense partner,” resulting in Indian US warships offering each other refueling and resupply services at sea. In 2018 several agreements was signed

However, India has its own ambitions in the region which do not necessarily align with that of US strategy. The recent purchase of Russian planes has resulted in US issuing threat to deliver sanctions against India. While India has its own international ambitions unlike Japan, India is also aware of the West’s expansionist and destructive record. India was quick to ban many Western-govt funded NGOs and are monitoring others closely, India knows too well that these western-government funded entities are the Wests footsoldiers for bigger plans in India and balkanization of India is on the cards and one which Indian policy makers realize will be more of a security threat to India than its concerns over China’s rising economic growth.

Are companies taking over sovereign nations?

An article by Lorenzo Marsili is relevant to this discussion. He says there is no America, no democracy and only IBM, ITT, AT&T and DuPont etc. Marsili says the world is a ‘collage of corporations’ and that ‘corporations have become the nations of the world’ and are increasingly acting so. He gives the example of Facebook announcing its own currency – LIBRA to its 2billion users ‘its citizens’ to pay for goods and services advertised on FB. China’s population is 1.34b and India’s population is 1.32b. Currency has been an element of sovereignty and now corporations like FB is taking on this role. Marsili also highlights role of corporations like Google & Amazon building global campuses like mini-states with their own ‘citizens’. According to Marsili Amazon has not paid federal taxes $11.2billon of profits in 2018. He also highlights the example of Cambridge Analytica scandal to showcase how corporations can manipulate personal information of billions of people for various reasons. What we should pick up from these examples is that the traditional concept of state sovereignty is dwindling and being usurped subtly and being transferred to corporations which are more ruthless and inclined to serve the interests of only a few globalists. However it does provide a wakeup call for nationalism and national politicians to realize the dangers knocking at their door.

Role of private think tanks in drawing US policy

In June 2013 American Enterprise Institute (AEI) released ‘Securing US Interests & Values in the Asia-Pacific’ a memorandum to President Obama & Congress. This was the blueprint by which US Govt was to promote economic integration & liberalization, strengthen alliances & security partnerships, reinforce US military posture in Asia Pacific. US policy is designed and funded by private think tanks who exert enormous pressure globally and US policy is more aligned to corporate profit & interest than interests or benefits to US citizens.

In total, there are 325,000 US military personnel in foreign countries.

In 1966, the UK leased to the US the remote, 17-square-mile Indian Ocean island of Diego Garcia to be used as a military base for US air force missions in the Middle East & refueling for Air Force patrols to South China seas.  UK chased out thousands of natives living in Diego Garcia to enable US to use it as a base. About 5000 US troops are stationed in Diego Garcia.

However, ICC has ruled that what UK did was illegal and Diego Garcia must be returned to the natives. Diego Garcia is the most strategic position for US – to the northwest of Diego Garcia is Middle East & South Asia to its East is Asia & West is Africa. Diego Garcia was used to launch attacks during the first Gulf War in 1991, then on Afghanistan in 2001, on Iraq in 2003 and targeting Al Qaeda & ISIS. Diego Garcia also has a deep port able to accommodate aircraft carriers, nuclear submarines & other ships. No one is allowed to enter Diego Garcia not even journalists. Diego Garcia is also used as a secret prison for ‘extraordinary rendition’ programs.

So where do 5000 US troops go? Sri Lanka is considered their alternate option

Daya Gamage’s article in the Asiantribune is pertinent as he quotes US State Dept Deputy Assistant Secretary Alice Wells describing Sri Lanka as a ‘real estate’ for the US in the Indo-Pacific region – it immediately questions whether $480m is the amount US is handing to buy Sri Lanka’s land with 10 land registries and handled via company that is to be agent for the US govt’s MCC project in Sri Lanka.

Leaving aside the many constitutional, legal, land ownership and judicial issues associated with the MCC, the present review committee cannot overlook MCC together with the ACSA signed with the US in August 2017 as well as the SOFA which will permit US boots into Sri Lanka virtually turning Sri Lanka into a US military hub. If the dangers of the unfolding scenario is difficult to imagine the humongous building coming up right infront of Temple Trees, the US Peace Corps already in Sri Lanka, the ‘schools’ being built in Eastern Province courtesy of the Indo-US Pacific Command are all clues as to what US has in mind and is pushing every button to secure approvals.

The many soft power arm-twisting includes hiring research firms to carry out favourable reports, engaging lobby groups to strike deals with even China offsetting any issues has been the bribe of Hambantota Port, engaging VVIP locals to show the ‘innocence’ of the ‘gift’ being offered by MCC to Sri Lanka. But if it’s a gift why have an agreement, why hire lobby groups, why hire research firms, why repeatedly send officials to push MCC through? These are ground realities that a committee must take stock of instead of reading only the lines and clauses of the agreement and completely overlooking case law, constitutional provisions, land law, rights of the peasants (bound by international treaty) issues like landlessness if land is privatized and bought by foreign companies – no committee can simply look at only the clauses of an agreement when the agreement is with a country that has illegally bombed nations, invaded and occupy nations, carries out regular regime changes, interferes in elections, used drones to kill even civilians and now assassinating and publicly claiming anyone going against their security concerns will also be eliminated. These are serious concerns that any sovereign country needs to take stock of.

Indian Ocean must remain a zone of peace and it is good for Sri Lanka, India, Pakistan and rest of South Asia to promote this instead of helping to militarize Asia and the Indian Ocean.